Mongols bikie boss Toby Mitchell acted like an “enforcer” when he assaulted one man and was “out for blood” when he punched another during separate attacks on the streets of Melbourne, a police prosecutor has told a court.

Sergeant Geoff Adams said a term of imprisonment should be considered as punishment for Mitchell’s violent crimes after the 45-year-old pleaded guilty to two counts of unlawful assault on Thursday. 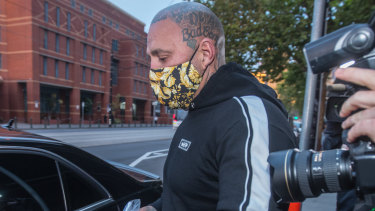 “The accused just believes he can go about his life and not worry about the law. He’s acting like he is the enforcer,” Sergeant Adams said.

A clean-shaven Mitchell sat silently throughout the almost hour-long online hearing, unmuting his microphone only to reply “Yes, your honour” a number of times.

While grinning throughout parts of the hearing, the smile vanished from his face and he shook his head when he learned members of the press would be able to view CCTV footage of both assaults outside Gilson cafe in South Yarra on October 8, 2020, and at Southbank on November 15.

The CCTV footage from South Yarra shows Mitchell and his victim standing outside the cafe before the bikie boss slaps him in the face with an open palm three times. Mitchell then falls to the ground before being helped up by a known associate. 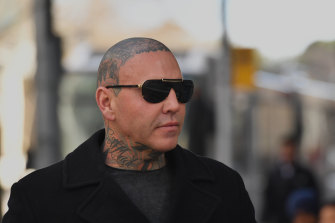 Video footage from November 15, 2020 shows Mitchell on the Southbank promenade near Queensbridge Street with a large group and men and women about 3am.

After getting into what appeared to be a verbal argument with a lone man, Mitchell struck the man to the face before delivering two upper cuts to his victim’s body as he crouched over.

After being dragged away by friends, Mitchell returned and unsuccessfully attempted to strike the victim again. The man this time fought back, punching Mitchell to the face and rendering him semi-conscious on the ground.

In pushing for a prison sentence for the two assaults, Sergeant Adams said the accused had “significant” prior convictions for violence, including unlawful assaults in 2016 and 2018, a recklessly causing injury charge in 2015 and an affray from 2014.

He said during Mitchell’s most recent spate of violence, the attack at Southbank showed he was “out for blood”.

“It’s only by sheer luck, and I’ll refer to a boxing term, that he has a glass jaw which rendered him semi-conscious, [otherwise] he would have continued the fight,” Sergeant Adams told the court.

“Both of the victims in this are not the aggressors, they’re actually trying to get themselves separated from it and the accused is repeatedly trying to fight.”

Defence barrister Damian Sheales hit back at suggestions either assaults were serious, with neither victim ever making a statement of complaint to police.

He said while his client’s criminal “notoriety” continued to burden his life, “poetic justice” had been served during the Southbank fight, with Mitchell left semi-conscious and helped from the scene by friends.

Mr Sheales said referring to his client as an “enforcer” was absurd, citing Mitchell’s significant health concerns after surviving being shot in the body five times in 2011 and in the arm in 2013.

Mitchell now takes 27 different types of medicine after losing major organs in the 2011 shooting, he said.

Magistrate John Bentley ordered Mitchell undertake an assessment on Friday to see if he was suitable for a community corrections order, after previously breaching one. The matter will return to court on Monday for sentencing.

Bikie, blood, boss, For, out, to
World News