Some of Australia’s leading pandemic advisers have questioned the Victorian government’s plan to exclude unvaccinated people from most venues and events until at least 2023, warning that it would be unethical to shut them out of society as coronavirus cases subsided.

With Victoria set to reach its 80 per cent double-dose target this week – triggering the long-awaited return of many more freedoms for people who are fully inoculated – researchers and epidemiologists have called for a more nuanced approach to the divisive use of vaccine mandates and passports. 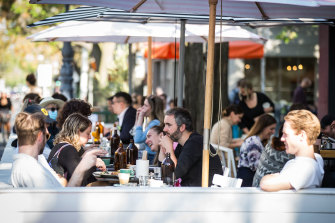 Vaccinated Melburnians eat out again as the city reopens.Credit:Getty

Infectious disease physician Sharon Lewin said she supported the government’s road map, under which Victorians will be allowed to travel across the state, density limits for the fully vaccinated will increase at hospitality venues and face mask will no longer be required to be worn outdoors once 80 per cent of those over 16 are fully vaccinated.

But Professor Lewin, the director of the Doherty Institute, also noted that getting to 90 per cent of double doses for those aged 12 and over, which is predicted to happen about November 24, “was something that we did not expect” and excluding people in the longer term would prove divisive and difficult.

“I think having incentives to vaccinate people is very good, and I fully support having compulsory vaccination in certain areas, but I think we’ve got to be careful about keeping unvaccinated people out for an unspecified period of time,” she said.

Professor Lewin said the current scenario, in which more than 25 per cent of Victorians aged over 15 were still yet to be fully vaccinated, posed a risk.

“But when you’re down at 10 per cent, the risk does reduce for everyone, so perhaps an alternative would be to prove that you’ve had a negative test over the last 48 hours. And at 90 per cent, maybe we should look at what the real impact is of having a blanket policy.”

This approach has been used in Europe, where a digital COVID certificate is provided to the vaccinated, but also those who have recently tested negative or have recovered from the disease in the past six months.

In a month’s time, Victorians who have received two doses of a COVID vaccine can expect to face few restrictions, bar having to wear a mask in select indoor locations such as on public transport, in hospital and aged care. But it’s a vastly different story for the unvaccinated.

On Sunday, Premier Daniel Andrews said those who hadn’t received the jab could visit other people’s homes and shop for the basics, but they would be barred from the vast majority of other venues.

Epidemiologist Tony Blakely described the road map as a finely balanced see-saw that would need to be fine-tuned depending on case numbers.

But he warned that once 90 per cent of eligible Australians were double-dosed – and if infections had reduced significantly – “it would be unethical at that point to keep the people who are unvaccinated out of society.

“But if case numbers go back up again then you might need to turn it back on, and my prediction is that we’ll be turning the vaccine certificate system on and off for at least a year,” he said.

The head of the epidemiological modelling unit at Monash University, James Trauer, said he supported the government’s heavy emphasis on vaccination in its updated road map, but questioned the need to commit to vaccine mandates extending into next year, particularly for teenagers.

“Hopefully [by then] we’ll just have the epidemic under better control and we won’t need to do that.”

From late November, those aged over 11 who are not vaccinated will be excluded from all but basic retail services, barring them from dining out, visiting a hairdresser or going to major events, for example. However, the unvaccinated would be able to take part in small funerals, weddings and religious gatherings.

COVID-19 is not as dangerous in children as adults. Associate Professor Trauer said, in his mind, the risk was not high enough to justify the mandates for this age group.

“It is a bit of a judgment call, but I think you need a pretty clear public health rationale to mandate vaccinations for 12 to 15-year-olds, and I don’t think we have that,” he said.

Burnet Institute director Brendan Crabb said he thought it was OK to give more rights to the vaccinated while Victorian remained in “such uncertain territory”, noting that there were countries he couldn’t visit without a yellow fever immunisation.

“As we start to see how much we’ve got things under control … obviously it’d be good, as soon as possible and as much as possible, to move away from differences between vaccinated and unvaccinated people,” he said.

Responding to the latest update to the road map, Professor Crabb said it was important that coronavirus numbers were kept low with the help of non-vaccination measures, including improved ventilation and allowing contact tracing systems to function properly.

University of South Australia epidemiologist Adrian Esterman agreed that other measures were needed and questioned the government’s loosening of the mask mandate.

“If it were up to me, I’d keep mask-wearing for a long time, potentially for a couple of years,” he said.

“We can’t just rely on vaccines – it has to be vaccines plus some public health measures. Mask aren’t expensive, they’re easy to use and they do a brilliant job of stopping infection.”