NSW Premier Dominic Perrottet has agreed to ongoing increased funding for the state’s anti-corruption commission, putting him further at odds with the Prime Minister’s staunch opposition to the state agency.

After years of funding battles between the NSW Independent Commission Against Corruption and the state government, Perrottet has finalised a new model which will provide more funding for the ICAC in next month’s budget, as well as increasing its overall baseline funding. 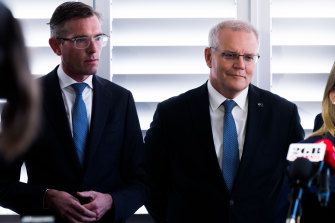 Prime Minister Scott Morrison said he stood by his criticism of the NSW ICAC as he campaigned alongside Premier Dominic Perrottet on Tuesday.Credit:James Brickwood

The government will create a specialist unit to determine the ICAC budget, and the agency will no longer be subject to efficiency dividends which are imposed on all other state government agencies.

Perrottet revealed the changes in NSW Parliament on Tuesday just hours after campaigning in the federal seat of Bennelong with Scott Morrison, who doubled down on his criticism of the ICAC as a kangaroo court.

Morrison said he had “never been a fan” of how it operated, accusing the agency of having “destroyed people’s reputations and careers before it’s even made a finding”.

The premier has rejected Morrison’s criticisms of the ICAC, and one of the agency’s three commissioners, Stephen Rushton, SC, has slammed as “buffoons” those who referred to the body as a kangaroo court, saying it was “deeply offensive” and undermined the institution.

Perrottet’s changes to ICAC funding fall short of the independent model the commission had been pushing, but goes significantly further than previous arrangements, which meant the agency had to write to the premier of the day to ask for extra money.

Instead, the ICAC will now apply for supplement funding through the Treasurer, and it will then be determined by a specialist unit within NSW Treasury.

Perrottet said funding for the ICAC, as well as the other integrity agencies including the Ombudsman and the Auditor-General, will be increased to “better reflect current and future resourcing needs” in next month’s budget, as well as increasing its baseline funding. Its recurrent funding for 2021 was $30 million.

The ICAC has repeatedly warned that it would be forced to reduce the organisation to its smallest size in three decades if its funding did not significantly increase.

NSW Greens MP Jamie Parker, the party’s spokesman on the ICAC, said the funding changes were significant but still did not ensure the agency was kept at arm’s length from government.

“I would prefer to trust ICAC chief commissioner Peter Hall to be determining the funding of ICAC rather than the politicians who the ICAC is policing,” Parker said.

As well as attacking the ICAC, Morrison also took a swipe at the legal community on Tuesday, who have been critical of the integrity body proposed by the federal government.

“I don’t care if barristers and lawyers and others up there in Macquarie Street – not in the parliament but in the barristers’ chambers – disagree with me,” Morrison said in Sydney.

“They disagree with me all the time. I’ve never had much truck with them over the course of my entire political career.”

The Australian Bar Association responded swiftly to Morrison’s remarks, describing them as an “attack” on the country’s more than 6000 barristers who ensured Australians had legal representation, including through pro bono services for those who could not afford it.

The issue of a national integrity commission is a key issue in the federal election campaign, after Morrison last month abandoned his 2019 election promise to establish a federal body, saying his government would only revive the issue in the next parliament if Labor backed its current proposal without amendments.