Have you seen a bigger one? Pest controller shares selfie with ENORMOUS 3ft tall wasps’ nest containing over 75,000 of the stinging insects he found in a customer’s attic after mistaking it for hornets

A pest controller has shared a selfie of himself with a gigantic 3ft tall wasps’ nest he found in a customers attic.

Ralph Clews, 48, of Coventry, could not believe what he was seeing when he retrieved the nest after treating the attic on October 8.

Despite working as a pest controller for 24 years, Ralph claims he has never encountered a nest as big as this before.

He said: ‘This is without a doubt the largest wasps’ nest that I have ever seen on the job.

‘When I was looking at it for the first time, I thought there was no way it could have been wasps that produced this nest and assumed it must have been hornets.

Ralph Clews (pictured) 48, of Coventry, could not believe what he was seeing when he retrieved the nest after treating the attic on October 8

The customer originally called Ralph’s company, RC Pest Management, to handle the infestation and bring the nest down so he could show his grandson.

Ralph added: ‘The idea was to take it to the school to show the class for educational purposes, but it was certainly a bit too big to do that.

‘It was the largest in a series of three nests that were found in the attic which were all sorted using a dust treatment which the wasps carry into the nests.’

Ralph explained that the typical size of a large nest is usually only slightly bigger than a football.

He said: ‘ In comparison to what was found in this attic, it was almost inconceivable to think it was produced by the same species.’

He explained: ‘I operate on extremely safe measures whenever I am working on a job like this.

While you can clean some pest infestations at home yourself, it is highly recommended that you call a pest control expert to get rid of wasp nests.

Before removing the nest,  be sure to test family members for allergies to insect stings.

Cover your arms, face and feet entirely with protective clothing when treating the infestation. 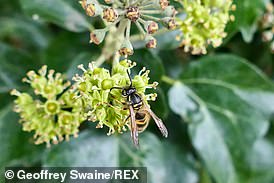 Always clear off the wasp nests during the night hours. The wasps are more passive during this time.

Warning: Never try to burn the wasp nests. The papery substance of the nest is highly flammable.

While clearing the nests, refrain from using flashlights, as this can alert the insects and make them aggressive.

When the nests are located in a hard-to-reach place such as the attic, you should always call a professional pest controller.

‘I have only been stung once this year and providing you put your PPE on you are usually adequately protected.

‘I don’t usually climb ladders and instead use a long pole at 11.8 metres so I can treat up to 2 and a half stories off the floor unless the nests are in a really inaccessible area.’

Ralph keeps bees in his spare time and has developed allergies from being stung quite frequently from collecting honey.

He said: ‘I usually put a cream on instantly after being stung and then take an anti-allergen tablet but luckily I do not require an EpiPen as some people with allergies can enter anaphylactic shock immediately after being stung.

‘Once I was stung on the tip of my nose through my bee suit veil and it was like being punched by Mike Tyson.’

Despite the dangerous profession, Ralph is happy with what he does and loves helping out families in need.

He added: ‘I enjoy what I do though, it is really rewarding, and I feel like I really make a difference.

‘Infestations like these could be putting families at risk and I can turn up, help them out and they can finally sleep easier at night afterwards.

‘Also, no two jobs are ever the same, so it never gets boring, the variety always keeps it interesting.’

Ralph also always ensures that the priority of the job is about proofing as opposed to extermination.

He said, ‘I always look to make sure that I am handling these situations in the most ethical way and look at all options before exterminating infestations.

‘There is a real misconception that we are always just instantly killing in my profession and that is not the case.

‘The usage of deterrents and proofing is always my first thought.’