Philanthropist Sir Michael Hintze has given his heartfelt backing to the Daily Mail’s Remember Me campaign with a stunning pledge of £100,000.

The businessman said it was a ‘privilege’ to support the drive for a memorial to Covid victims at St Paul’s, which he hopes will become a place of ‘national mourning’ for all faiths.

His generosity comes as more than 1,000 letters have flooded in from Mail readers supporting the cause, with cheques ranging from £2 to £2,000.

The letters processed so far have raised just under £25,000, while more than £135,000 including Gift Aid has been donated by supporters online.

The donations – together with Sir Michael’s pledge and a sizeable gift from Lord Sugar – mean that more than £360,000 has been raised since the Mail launched the campaign at the weekend.

Combined with the funds already collected by the cathedral itself, £800,000 has been pledged towards the £2.3 million needed to build the tribute. 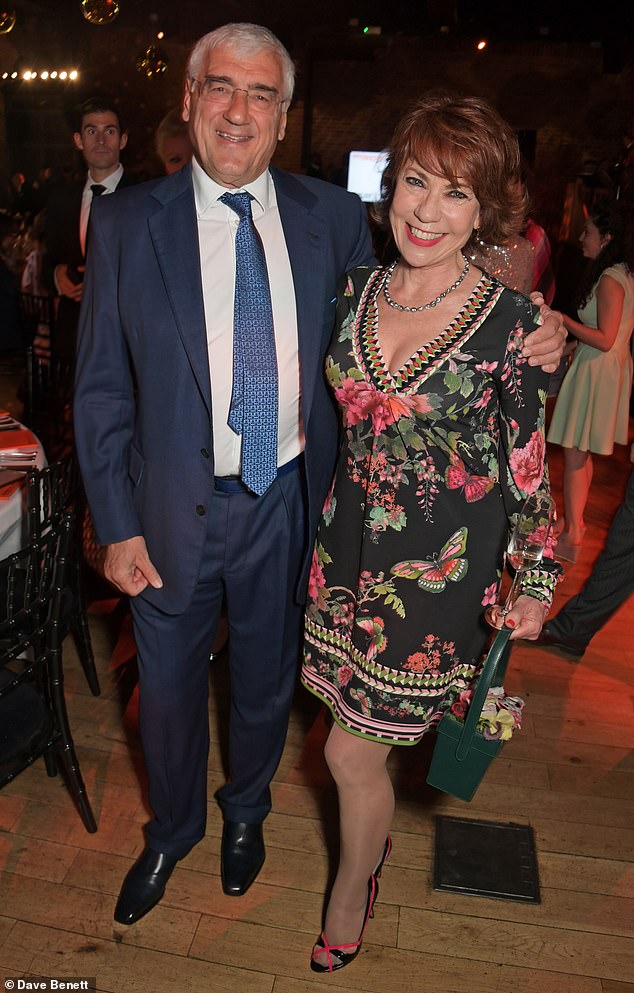 Philanthropist Sir Michael Hintze has given his heartfelt backing to the Daily Mail’s Remember Me campaign to build a memorial to the Covid-19 victims in St Paul’s Cathedral with a stunning pledge of £100,000

Sir Michael, 67, said last night: ‘There has been such loss – and now the most important thing we must do is to remember. It is such a privilege to be able to help support this memorial, which will allow a national mourning for people of all faiths for those we have lost.’ Sir Michael and Lady Hintze have made many notable donations to the world of arts and culture through the Hintze Family Charitable Trust over the years.

In 2014, he gave £5 million to the Natural History Museum – the single largest donation it has received since opening in 1881.

The founder of London-based investment firm CQS, Sir Michael’s enormous contribution to the world of arts was recognised with a knighthood in 2013.

His strong backing for the Remember Me campaign follows ringing endorsements from Prince Charles, Boris Johnson and NHS boss Sir Simon Stevens as well as support from thousands of Mail readers.

St Paul’s director of development Nicky Wynne said her team had been moved by the response of Mail readers. She said: ‘I had the honour of reading letters sent to us by readers. It was an incredibly moving experience. We had a note from someone who could only afford £2 but wanted to ensure we got it because the project was so important to them, to someone who gave £2,000.’

It is hoped the memorial – which will feature a grand oak portico engraved with the words Remember Me – will become an important place of pilgrimage for the nation.

Through the portico, a chapel inside will display an array of screens showing the cathedral’s virtual book of remembrance immortalising the stories of those lost to the pandemic. The Remember Me book – which is open to those of all faiths and none – was launched in May last year and bears the names and photos of more than 8,400 victims.

Each memorial is free to enter and is dealt with sensitively by the Remember Me moderators who have been working with bereaved relatives to add more than 1,000 tributes this week alone. 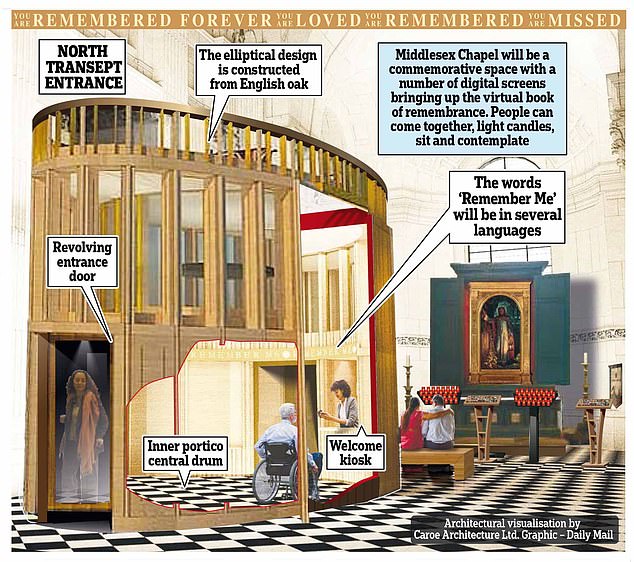 Miss Wynne added: ‘Such was the UK-wide positive reaction to Remember Me, we realised last year that we needed to bring it into the cathedral so that everyone who died as a result of Covid-19 had a permanent home and would not be forgotten.

‘Because the pandemic had such a serious financial impact on St Paul’s we could only do this if we had a fundraising campaign.

‘Having the Daily Mail and its readers back our fundraising and awareness raising campaign means such a great deal.’

Sir Lloyd Dorfman, a major force behind the project who provided a substantial donation to the cathedral to get things started, also praised Mail readers for ‘fabulously’ getting behind the drive.

Speaking to LBC’s Nick Ferrari, he said: ‘We launched the online memorial because there was felt a need by the Dean of St Paul’s Cathedral and the Bishop of London that thousands of people were dying, there weren’t proper funerals, people weren’t getting a chance to say goodbye.

‘The idea was always that at some point it would also translate into a physical memorial and that’s what we’re fundraising for at the moment. The Daily Mail and its readers have got fabulously behind it to help us fundraise… it’s a tremendous initiative.’

Sir Lloyd also urged the bereaved relatives of more than 127,500 lost in the pandemic to add their loved ones to the online book.

He added: ‘This is not going to bring anybody’s loved one back, but what it does do is that instead of people being statistics on news bulletins… this will give these lost loved ones a place in the history of this country.’

Capt Tom would be so proud of memorial, say his family

By Andrew Levy for the Daily Mail

As one of the most loved charity fundraisers this country has ever seen, it’s the sort of challenge that would have seen him doing laps in his garden all over again.

The family of Captain Sir Tom Moore yesterday gave their endorsement to the campaign for a national memorial to coronavirus victims – and said the indomitable fundraiser would have backed it enthusiastically too.

They also revealed they had taken ‘great comfort’ from the public’s support after his death from coronavirus.

The family added that providing a focal point at St Paul’s Cathedral for thousands to remember loved ones who had died during the pandemic would provide similar solace.

‘In what has been a challenging time for the whole nation, my family has been blessed with support far and wide, which has given us great comfort,’ said Sir Tom’s daughter Hannah Ingram-Moore, on behalf of her husband Colin and children Benjie and Georgia.

She added: ‘I welcome this campaign as I have no doubt it will result in uniting many who have suffered similar loss and offer not only comfort but also secure a fitting way to ensure our loved ones are remembered for many years to come. 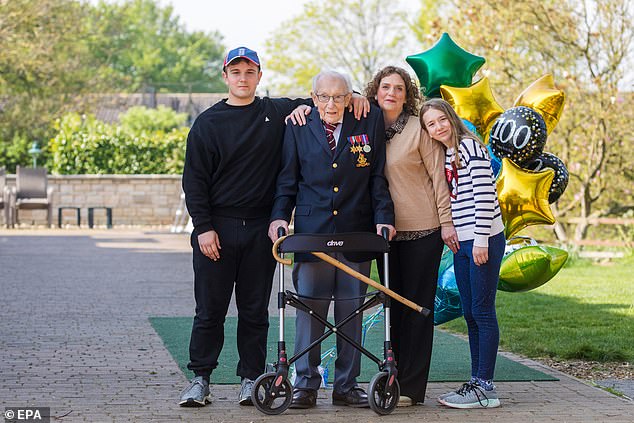 The family of Captain Sir Tom Moore yesterday gave their endorsement to the campaign for a national memorial to coronavirus victims – and said the indomitable fundraiser would have backed it enthusiastically too (Captain Tom is pictured with his daughter Hannah Ingram-Moore and grandchildren Benji, left, and Georgia, right)

‘My father would have been so proud to know a fitting tribute was being made to bring the nation together at this unprecedented time of loss.’ Captain Sir Tom raised nearly £33million for the NHS – £39million including Gift Aid – after making circuits of the garden at the home he shared with Mrs Ingram- Moore, 50, and her family in Marston Moretaine, Bedfordshire.

After his inspirational feat in the runup to his 100th birthday, carried out over several weeks with the aid of a walker, the Second World War veteran was knighted by the Queen and made an honorary colonel.

He caught Covid-19 in hospital while fighting pneumonia and died on February 2. He would have celebrated his 101st birthday last Friday, April 30.

Mrs Ingram-Moore has also made her own generous donation to the memorial. Boris Johnson has hinted her father would have a hospital named after him as well as a possible permanent monument.

Mrs Ingram-Moore’s gift was accompanied with an emotional message which read: ‘In memory of my father Captain Sir Tom.

‘This is a most poignant and respectful tribute to all those we have lost during the pandemic. I am very much looking forward to visiting this beautiful place, allowing us to remember those we have loved and lost. Hannah x.’

Others who have backed the campaign to commemorate the 127,500 lives lost so far, as well as indirect virus victims, include the Prime Minister, Prince Charles and faith leaders.

A place to grieve … and to heal

To compare Britain’s experience of the pandemic to the First World War would, I think, be an exaggeration – although to the individual the pain of losing a loved one is just as great whatever the circumstances.

But the fundraising appeal for a national memorial at St Paul’s Cathedral for those who have, directly or indirectly, lost their lives to Covid is surely in the same tradition. For the 100,000 or so war memorials around Britain – in villages, towns, cities, at railway stations, in schools, factories and places of worship – were not put up by government. They were erected from money raised by communities often far from rich.

Everyone felt the importance of remembering the sacrifice of the Fallen in a tangible way. By keeping the memory of loss literally before the eyes of later generations, it was hoped mistakes of the past would be avoided. That, tragically, did not happen and the rolls of honour had to be reopened for new names in 1945.

But the principle remains good. If we forget the past, we fail to learn from it. That holds for the pandemic as much as anything else. Despite the warnings from scientists over many years of a highly infectious respiratory virus that could, within days, travel around the globe, we were unprepared for what that meant in reality; from lockdowns and social distancing to PPE demand and the race to develop a vaccine. 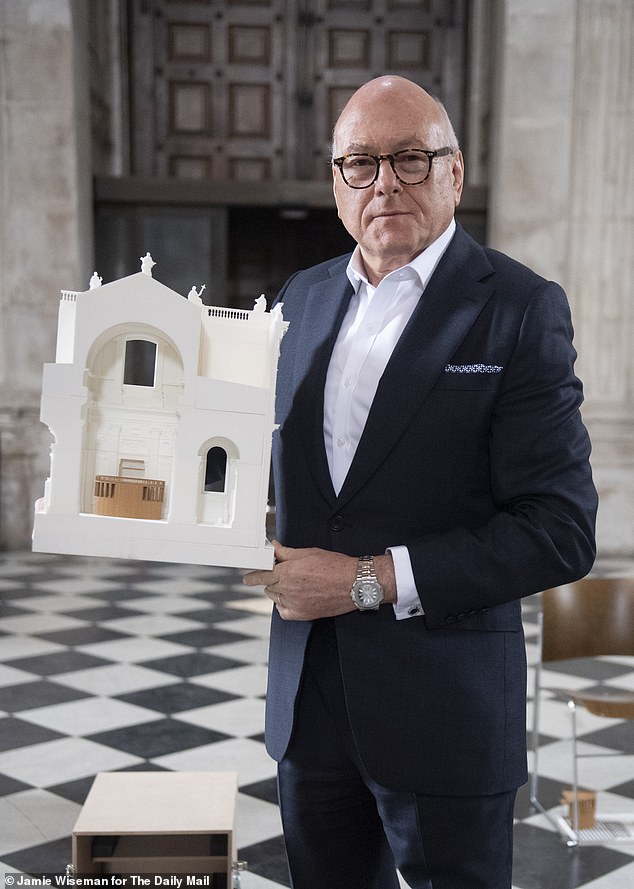 We have learned so much and come so far but some of us did not make it. We can never forget the 127,500 people we have lost and for whom the memorial – an oak portico carved with the words Remember Me – for people of all faiths and none, will stand as testimony to lives cut short and the suffering of loved ones left behind.

While researching my book, War Memorial, I came to understand that such places, in whatever form, fulfil a profound psychological need. They represent both the patriotism and suffering of ordinary soldiers and the grief suffered by those they left behind.

They are a focus for the emotion of an individual or that shared by a community – and this is perhaps particularly necessary here in Britain where traditionally people are reserved about their feelings.

In Latin countries, lamentations in times of sorrow and exuberance in times of joy can be highly demonstrative. We make up for our reticence by the number and variety of monuments that remember great people and epic events. And those memorials, from the Whitehall Cenotaph – Sir Edwin Lutyens’ block of stone shaped by complex geometrical calculations – to the smallest commemorative plaque in a tiny hamlet, never lose their potency, their power to make us stop, to think and to remember.

Some believed that with the passing of the wartime generations such traditions would fade, the desire to honour the dead would diminish. Instead, it has grown stronger. More people, many of them children, visit war cemeteries, tended so beautifully by the Commonwealth War Graves Commission.

They have become a place of pilgrimage. And who could forget the tide of ceramic poppies that filled the Tower of London moat in 2014 – nearly 900,000, one for every British and Commonwealth serviceman and woman who died in the First World War.

We need to grieve and remember in order to heal and move on. And a Covid national memorial will help us do exactly that as we move on from the hardships of the past year.

In a corner of the St Paul’s Cathedral crypt is a block of stone commemorating its architect Sir Christopher Wren. It bears a Latin inscription, Si monumentum requiris circumspice, which translates as ‘Reader, if you need a monument, look around you.’

It is a powerful statement that needs no explanation. As people enter the new portico of the planned memorial and see the words ‘Remember Me’ I believe they will be filled with the same emotion.