The boss of Pilbara Ports has warned degrading mental health of maritime crews has significantly raised the risk of a shipping catastrophe and has called on governments to allow crew changes to occur easier.

Pilbara Ports chief executive and Ports Australia board member Roger Johnston said thanks to COVID-19 restrictions seafarers were not allowed to disembark the ship while in port and swapping crews had become difficult, which was harming the health and wellbeing of about 200,000 people across the globe. 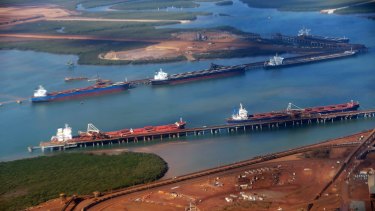 The boss of Pilbara Ports worries the risk of an accident is growing to unacceptable levels because of COVID-19 restrictions.Credit:Bloomberg

Mr Johnston oversees some of the biggest and busiest ports in the country and raised serious concerns about the welfare of seafarers in control of some of the world's biggest bulk carriers.

He said some had spent nearly 14 months at sea and he was worried the risk of a major accident was growing to unacceptable levels.

“There is an elevated risk to output when you end up with ships coming in with tired and stressed seafarers on board,” Mr Johnston said.

“With long and narrow channels in Port Hedland you don’t like things that contribute to the risk of getting vessels in and out.”

In its September safety bulletin the Australian Maritime Safety Authority said it had spotted worrying trends since the beginning of the pandemic, including an increase in 'person overboard' incidents, and a 40 per cent increase in Maritime Labour Convention complaints.

“These indicators collectively suggest the pandemic is having a significant impact on seafarer mental health and wellbeing,” the bulletin said.

“Added to this, we know that increased psychological distress from worry, isolation, and significantly prolonged sea time can have tragic consequences if not appropriately managed.”

Mr Johnston said in a normal year there would be between 10,000 to 20,000 seafarers replacing old crews at WA ports, but now if a shipping company wanted to swap crews it would have to fit them in to the state’s weekly 725-person international arrivals cap.

He said the onerous restrictions were leading to "heartbreaking" situations at sea, including one recent instance where a Korean vessel was off the coast of the Pilbara when its master died.

The ship asked Pilbara Ports whether it could help repatriate the body back to Korea but they were forced to decline the request. The ship then sailed back to Singapore, who also sent it on its way. Eventually, the ship had to sail back to Korea before the body could be removed.

Mr Johnston’s comments were made on the day it was revealed Filipino crew members of the iron ore bulk carrier Patricia Oldendorff had contracted COVID-19 but the state-owned agency has stood by its request for change.

Mr Johnston said Pilbara Ports’ number one priority was to ensure COVID-19 did not get into the ports or the mining industry, but he called on both levels of government to devise a workaround to mitigate the risks associated with tired and stressed crews.

“We keep on elevating the issue. It is a rising risk,” he said.

Mr Johnston suggested WA follow the Queensland model, which sees seafarers exempt from the arrivals cap because they are considered travellers in transit.

The appetite for change from the state government seems low, particularly as it grapples with the Patricia Oldendorff issue where 17 of 21 crew have now tested positive to COVID-19.

Ports Minister Alannah MacTiernan did not answer a direct question about whether the government was looking at workarounds to make crew changes easier, instead she said crew changes were more feasible in global shipping hubs such as Singapore and Manila.

Ms MacTiernan said crew swaps in WA were complicated by the current lack of international flights in and out of WA.

On Tuesday Health Minister Roger Cook raised concerns about the protocols in place that allowed the Patricia Oldendorff crew to sail while infected.

“We need to continue to work with the shipping agencies, with other governments and with the Commonwealth to ensure these international protocols are a bit tighter,” he said.