Pilots of a doomed China Eastern Airlines flight failed to respond to calls from air-traffic controllers after tipping into a deadly nosedive, authorities said, as the search of the crash site was halted due to rain.

The Boeing 737-800 was travelling at close to the speed of sound in the moments before it slammed into a hillside, according to a Bloomberg News review of flight-track data.

Such an impact may complicate the task for investigators because it can obliterate evidence and, in rare cases, damage a plane’s data and voice recorders that are designed to withstand most crashes. 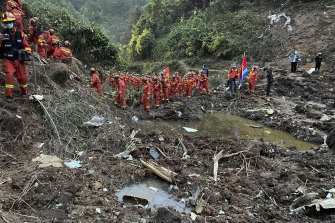 Rescuers work at the site of the plane crash in Tengxian County in southern China before rains topped the search.Credit:Xinhua/AP

The Boeing Co. 737-800 was knifing through the air at more than 966 kilometres per hour, and at times may have exceeded 700 mph, according to data from Flightradar24, a website that tracks planes.

“The preliminary data indicate it was near the speed of sound,” said John Hansman, a Massachusetts Institute of Technology astronautics and aeronautics professor who reviewed Bloomberg’s calculation of the jet’s speed. “It was coming down steep.” 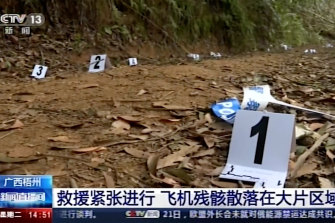 Video footage run by China’s CCTV showed debris marked by numbers at the site of the crash.Credit:CCTV/AP

Flight 5735 was flying to Guangzhou from Kunming with 132 people on board at an altitude of about 29,000 feet when it began a sudden descent, according to data transmitted by the plane and captured by Flightradar24. The jetliner was cruising at about 957km/h before the dive.

The speed data is consistent with videos appearing to show the jet diving at a steep angle in the moments before impact and indicates that it likely hit the ground with huge force.

“It was an exceedingly high-energy crash,” said Bob Mann, president of RW Mann & Co consultancy, who did not participate in the speed analysis. “It looks like it literally evaporated into a crater. Do the flight data recorder or cockpit voice recorder or quick access recorder – do any survive? I just don’t know the answer.”

Modern black-box recorders, which store data on computer chips, have a good record of survival in high-velocity crashes, said James Cash, who formerly served as the US National Transportation Safety Board’s chief technical adviser for recorders.

“The hard part is going to be finding it,” Cash said. 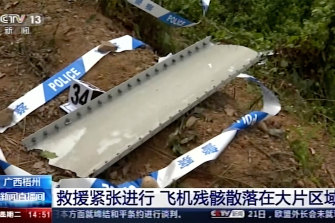 Debris is surrounded by police tape at the crash site.Credit:CCTV/AP

The circuit boards storing the data often break loose from the recorder’s protective exterior. But data can usually be extracted even if they’re damaged, he said.

“It’s probably embedded in the ground somewhere,” he said. “But I would suspect it would be O.K.”

Search and rescue efforts at the crash site were halted on Wednesday due to rain, Chinese state media reported, with footage on news channel CCTV showing a drenched, muddy road and idled bulldozers. The TV reporter said there was still the smell of fuel in the area.

The rain means small landslides are possible, drainage work is required, and the aircraft’s black boxes still haven’t been found, according to CCTV.

Torrential rain is forecast in the crash area, which may impede rescue efforts, Xinhua News Agency reported. High winds are also expected. Caixin said weather conditions were good at the time of the crash, citing an official from China’s meteorological administration.

Zhu Tao, an official with the Civil Aviation Administration of China, said at a briefing on Tuesday that the recorders had not been recovered. Searchers won’t be aided by a beacon or “ping” from the devices because they are only activated underwater.

He said air traffic controllers tried multiple times to reach the pilots after the plane tipped into the deadly dive but received no response to their calls.

The two recorders on the China Eastern 737-800 – a cockpit voice recorder and another that captures flight data – were supplied by the aerospace division of Honeywell International Inc. and installed on the plane when it was new, according to company spokesman Adam Kress.

Crash investigators have over decades perfected the examination of wreckage in search of clues, but some impacts can obliterate evidence. The crash of an Ethiopian Airlines 737 Max in 2019 was traced back to a sensor on the plane’s nose, but the sensor was never found after the jet hit the ground at a high speed, according to a preliminary report from that nation.

Accident investigators should be able to find more precise speed data from the jet’s flight recorder. If it isn’t available for some reason, aerodynamic experts can perform extensive analysis to more closely estimate speed.

Flightradar24’s data includes the jet’s speed, but it’s measured horizontally across the ground. Bloomberg’s computations give a rough idea of how fast it was flying through the air by taking into account its horizontal speed over the ground as well as how fast it was descending.

The speed estimates were based on how fast the jet travelled between two points and didn’t take into account wind direction or other atmospheric conditions. The Bloomberg review was conservative and actual speeds may be higher.

While unverified videos showed the plane diving at a steep angle near the ground, it wasn’t clear how fast it was travelling at impact. The last data transmission captured by Flightradar24 occurred at about 3200 feet altitude.

About 40 seconds before the last transmission, the jet stopped descending and briefly climbed before resuming the dive. During these later stages of the flight, it slowed somewhat, according to the preliminary review.

It was still flying far faster than normal. Typically, jets don’t go above 288 mph at altitudes below 10,000 feet. The China Eastern jet was travelling at roughly 470 mph or more at those altitudes, according to Flightradar24 data.