George Michael’s £19million London mansion is at the centre of a planning battle with neighbours up in arms over the new owners’ plans to transform property which they claim will ‘ruin one of the finest rows of houses’.

Stephen Cameron and wife Clare Harrison, who made their money in medical communications, describe themselves as a ‘superfans’ of the late singer, who died Christmas Day 2016, and want to change the frontage of their home.

But the changes which include replacing old railings was blasted as a ‘derogatory’ alteration of one of the ‘finest rows of houses’ in Highgate by a local preservation society.

The pair who bought the Grade II listed seven-bedroom property, near Hampstead Heath, for £19million in 2020 also want to make changes to excavate the basement and turn it into a second kitchen but local groups have questioned the plans, saying it would cause ‘structural problems’.

After the Wham singer died on Christmas Day 2016 due to liver and heart complications, the Grade II listed was let to A-listers for £15,000 a week before it was sold in 2020.

Michael spent many reclusive years at the pad, he bought for £7.65million, which was previously owned by Annie Lennox and lived there with Kenny Goss, his ex-boyfriend. 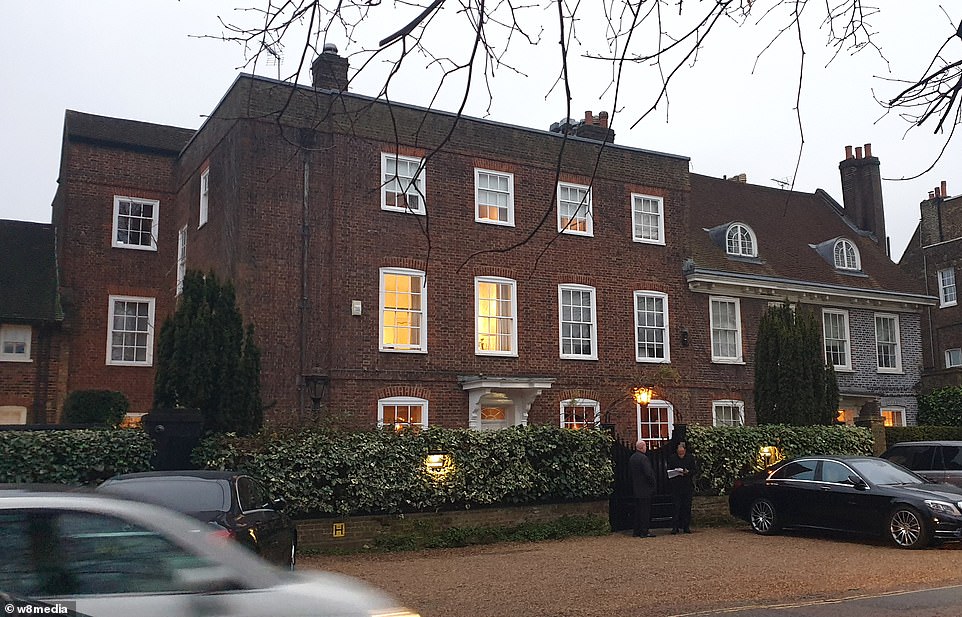 George Michael’s north London home was sold for £19million – more than twice what he paid for it. Pictured in August this year 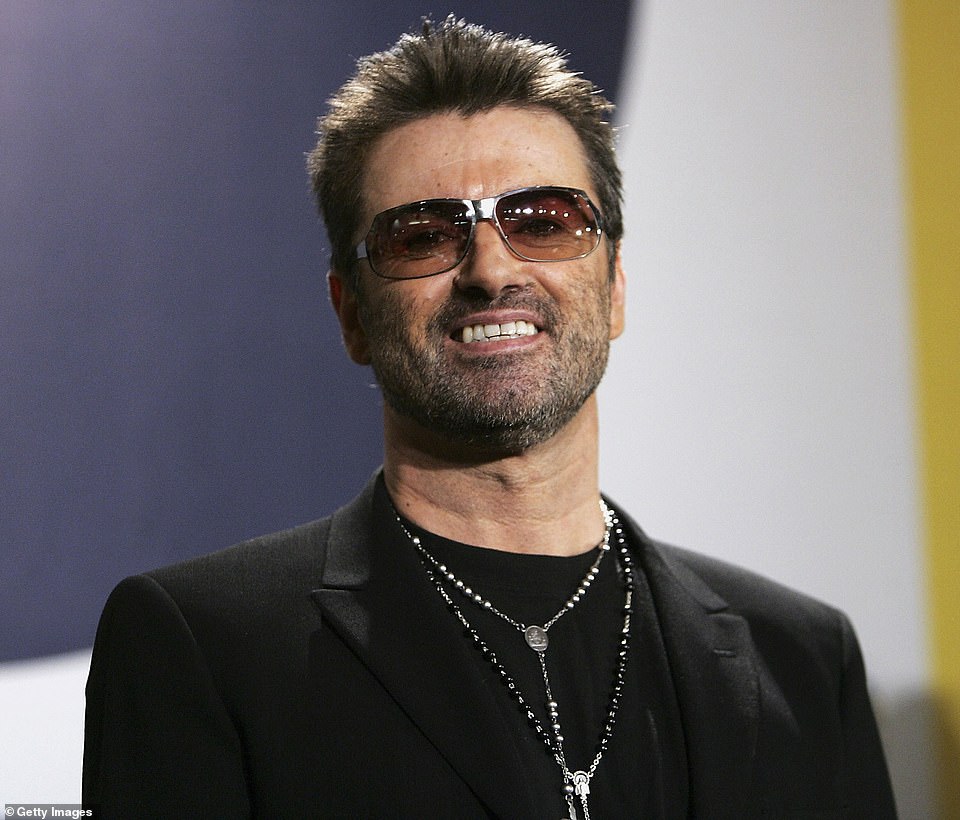 George, pictured in 2005, left the bulk of his £98 million fortune to his sisters Melanie and Yioda. The house appears to have been sold by his father, Kyriacos Panayiotou, and it’s believed the money will go to his family

Under particular fire has been the plans over changes to the front, a planning application to Camden Council reveals.

If approved, this would replace the railings, and demolish and rebuild the middle section of the wall.

Janet Jones from the Highgate Society said she agrees the railings around the The Grove property, originally built by William Blake in 1668, are in need of repair, but does not think they are in ‘need of replacement’.

However, the couple who bought the home, largely rebuilt in 1933, argue railings changes are in needed due to ‘security issues’ and the Heritage Statement argues ‘the sense of openness, history and quality that the land contributes to the setting of nearby listed buildings and to the character and appearance of the Highgate Conservation Area would be retained’.

Ms Jones said: ‘Since the tributes to George Michael were removed and the gate shut, the existing railings are more than enough deterrent for anyone to sit or stand on what are two small pieces of grass.’

She added: ‘Whilst not objecting to the interior works to the house, which seemed balanced, the Highgate Society strongly objects to this application which will, unnecessarily, and in a derogatory manner, alter the frontages of one of the finest rows of houses in the Highgate Conservation Area.’

Willemien Hines, who sold the mansion to Michael and lived there over 20 years, said in 1989 Sting and Trudie Styler also wanted to do something similar with the railings at a house on the same street but backed away from the proposal and Hines agreed digging would ‘affect the neighbouring houses’.

‘I implore the council not to allow new owners to destroy what so many previous owners ( amongst whom Sir Patrick Sergeant, Yehudi Menuhin, Sting, Anny Lennox, John Hines, Sir Mark and Lady Turner (and many, many more distinguished residents) have preserved, restored, treasured and guarded for future generations’, they added.

Peter Cassidy from the Highgate Conservation Area Advisory Committee joined the objections, saying: ‘There is no justification provided for not retaining the existing railings, gate, lamp overthrow and lantern on the front boundary or the existing railings to the lightwell.’

He also said the relocation of the swimming pool would have a ‘detrimental affect’ on the building and an 18th century wall. 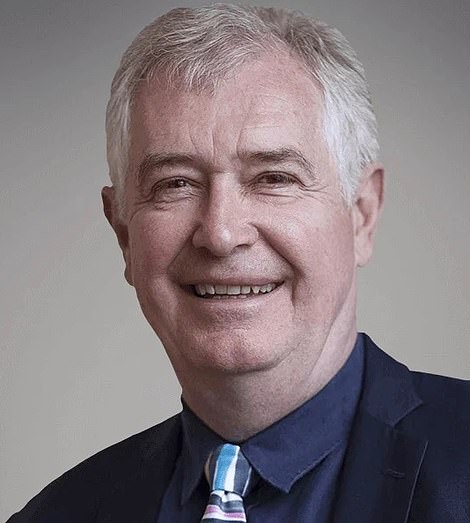 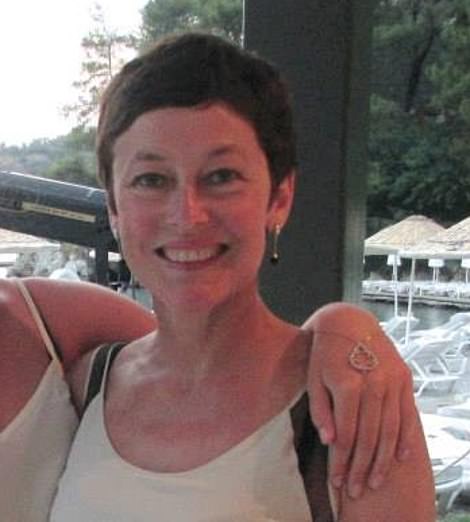 Stephen Cameron, left, founded the multi-million pound medical marketing business Nucleus Global before its sale in 2020. Under particular fire has been Mr Cameron his wife Mrs Harrison, right, wanting a lot of changes to the front, such as replacing the railings, and demolishing and rebuilding the middle section of the wall 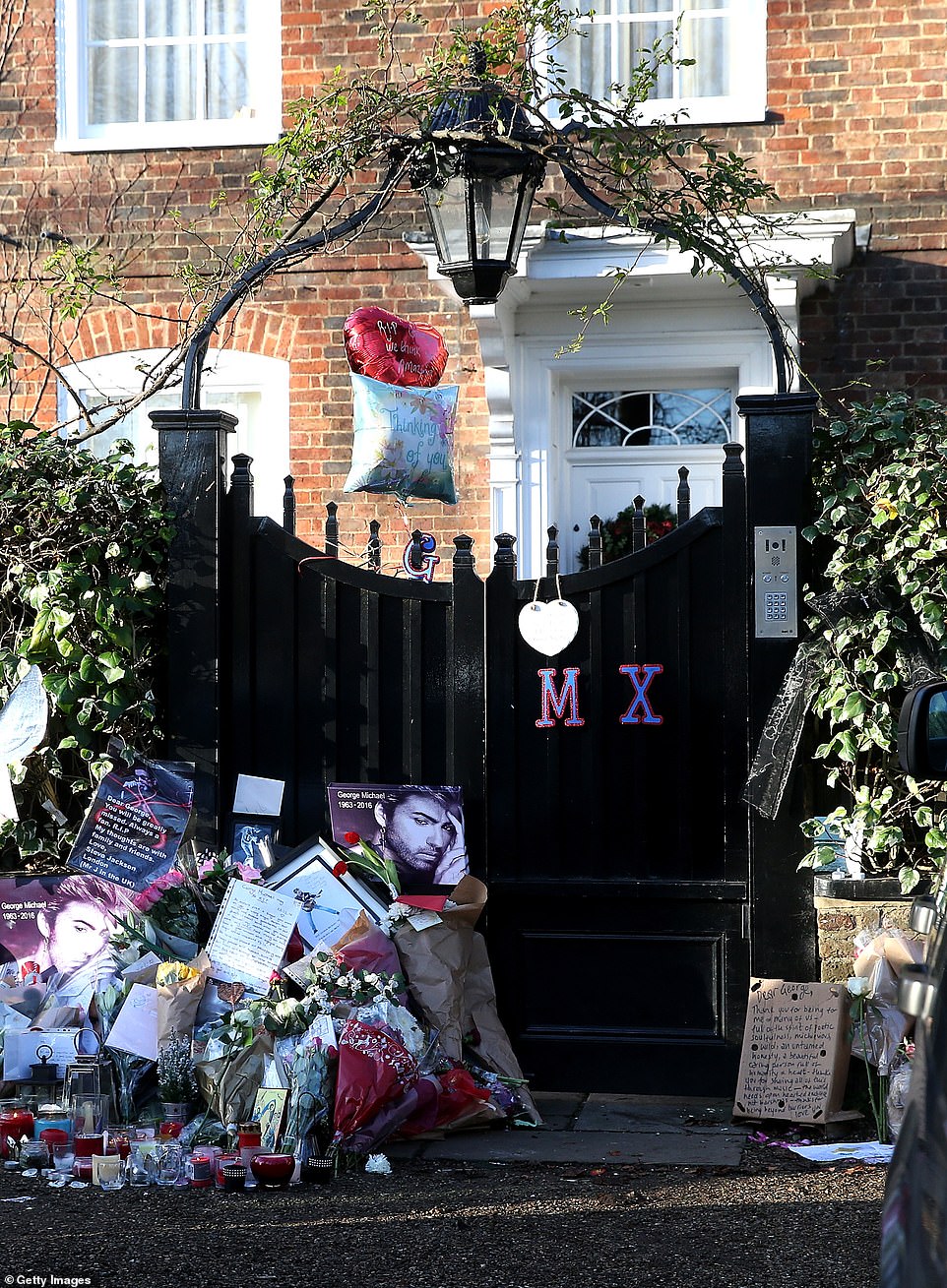 After George died, fans created a shrine, with further tributes on a patch of grass opposite which was later removed in 2018

But Tim Dignum, who lives nearby disagrees and was wholly in favour of the plans, saying: ‘I am comforted by the modest nature of the proposed works, which appear to both sustain and enhance the historical characteristics of the building.

‘Those works will have no discernible impact on the quality of life that I currently enjoy.’

Responding to these criticisms, Allen Sacbuker, from SM Planning, on behalf of the owner’s said the railing will only be ‘modestly increased’ to 1.3m in height and the reference to security and safety is about the spikes on the railings and the openness of the green.

He said on the changes to the swimming pool, that the walls would be ‘unharmed’ and there had been consideration on these issues.

When Mr Cameron bought the home in 2020 he told the MailOnline, ‘It’s a beautiful property, stunning and I’m looking forward to living there. I’m also a huge George Michael fan so that makes it even better.

‘I know the area really well and have been living in this part of North London for several years. It’s a beautiful house to live in and the whole family is happy.’ 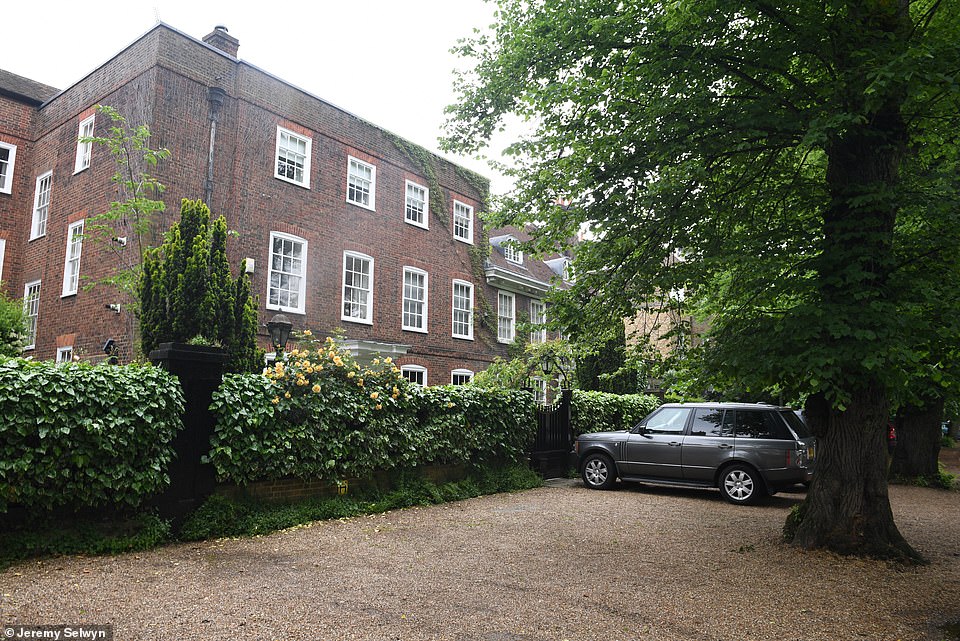 The mansion was previously let by an agency that specialises in hiring out exclusive properties ‘off market’ to the stars. Clients have included Brad Pitt, Angelina Jolie and singer Rhianna, who rented homes while they were filming in London

The Grade II listed semi-detached property, which Michael bought in 2002, was built in about 1688, with three storeys and a basement, and was subsequently rebuilt in the 1930s.

After George died, fans created a shrine on a patch of grass opposite which was later removed in 2018.

Last year a source told the Daily Mail that the family didn’t want to let the Highgate home go, and instead ‘want others to enjoy the beautiful house’.

‘Nobody knows which A-lister will be in there yet but it is likely to be somebody really big. It’s the most ideal place, kitted out for celebrities,’ they added. 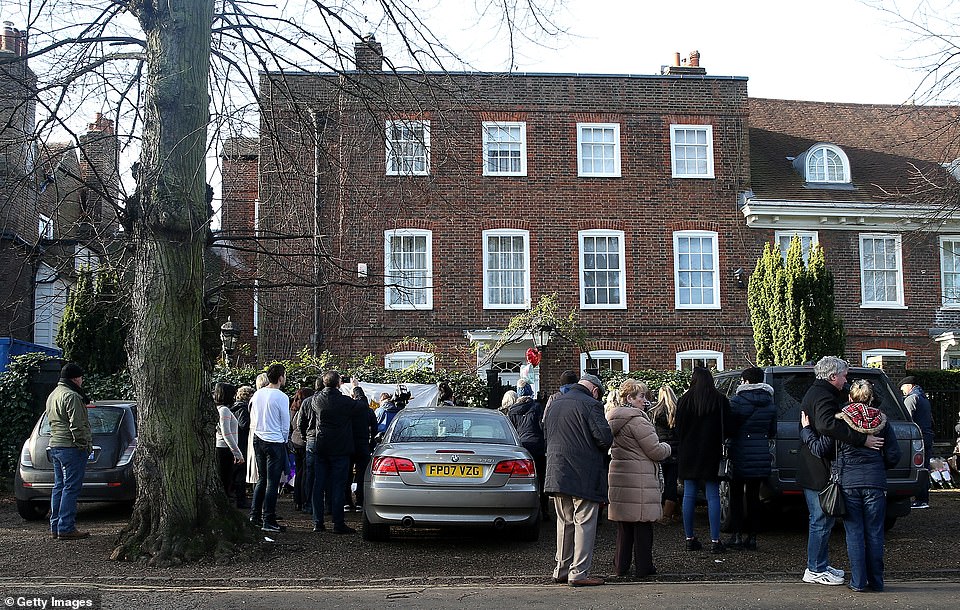 George’s sister Melanie is believed to have moved into the property after his death, but in a tragic twist of gate, she died there on Christmas Day in 2019, exactly three years after her brother

Michael’s sister Melanie is believed to have moved into the property after his death, but in a tragic twist of gate, she died there on Christmas Day in 2019, exactly three years after her brother.

After his death it emerged Michael, who is buried in Highgate Cemetery next to his mother, anonymously paid for the Highgate Christmas tree every year and was the largest private sponsor of the local fair.

Michael also owned a mansion in Goring-on-Thames in Oxfordshire, where he was found dead.

Fadi Fawaz, who was George’s partner when he died and found his body, continued to live in the singer’s other £5million London home, but was deemed to be ‘squatting’ there after ignoring legal letters to leave.

The mansion was previously let by an agency that specialises in hiring out exclusive properties ‘off market’ to the stars. Clients have included Brad Pitt, Angelina Jolie and singer Rhianna, who rented homes while they were filming in London