PM says world needs to 'grow up' over the climate crisis

‘On the road to extinction’: PM says world needs to ‘grow up’ over the climate crisis or the planet will become ‘uninhabitable’

Boris Johnson will tonight warn world leaders they need to ‘grow up’ on climate change or risk making the world ‘uninhabitable’.

In a hard-hitting speech to the UN General Assembly in New York, the Prime Minister will warn that mankind cannot continue to act as if ‘someone else will clear up the mess we make’.

Mr Johnson, once a climate change sceptic, will warn that failure to take dramatic action at the Cop26 climate summit in Glasgow in November will put the human race on the road to ‘extinction’.

The President doubled the US contribution to £8.2billion ($11.2billion).

But government sources said a string of other countries – including France, Italy, Spain and Canada – still need to ‘step up to the plate’. 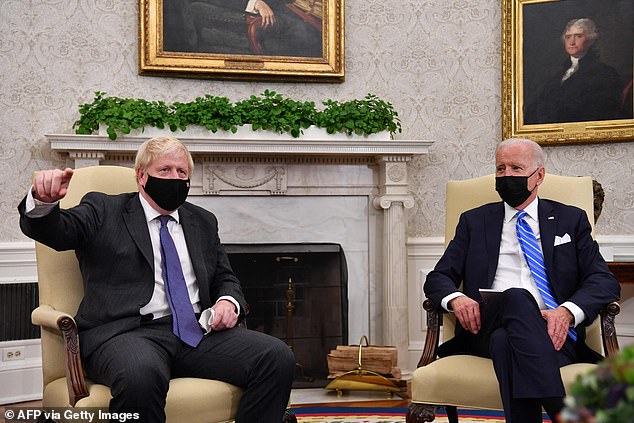 In tonight’s speech, the PM will note that mankind is 200,000-years-old, roughly one-fifth of the typical survival range of mammal species on Earth.

He will say: ‘In terms of the life of our species, we are about 16.

‘We have come to that fateful age when we know roughly how to drive and how to unlock the drinks cabinet and to engage in all sorts of activity that is not only potentially embarrassing but also terminal.’

He will continue: ‘We still cling with part of our minds to the infantile belief that the world was made for our gratification and pleasure and we combine this narcissism with a primitive assumption of our own immortality.

‘We trash our habitats again and again with the inductive reasoning that we have got away with it so far, and therefore we will get away with it again.’

But the PM will warn that the ‘adolescence of humanity is coming to an end’, with the world facing a ‘critical turning point’ in Glasgow.

‘It is time for humanity to grow up,’ he will say. ‘It is time for us to listen to the warnings of the scientists – look at Covid if you want an example of gloomy scientists being proved right – and to understand who we are and what we are doing. 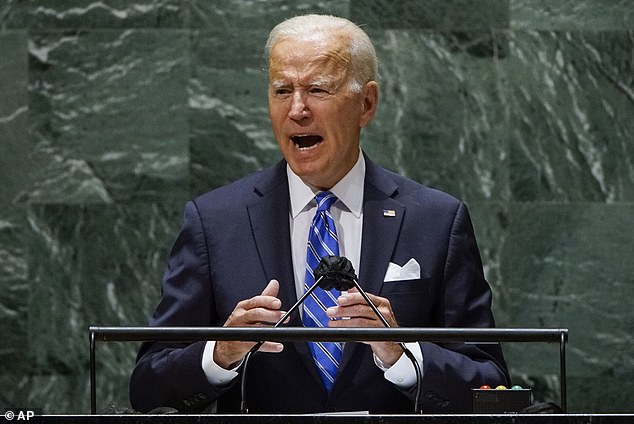 The world – this blue sphere with its eggshell crust and wisp of an atmosphere – is not some indestructible toy, some bouncy plastic romper room against which we can hurl ourselves to our heart’s content.

‘Daily, weekly, we are doing such irreversible damage that long before a million years are up will have made this beautiful planet effectively uninhabitable – not just for us but for many other species.’

A controversial new security deal between Britain, US and Australia will be the model for future UK diplomacy, Foreign Secretary Liz Truss said yesterday.

Miss Truss, who replaced Dominic Raab in the role last week, said the so-called Aukus deal was a ‘great example’ of her new doctrine of combining Britain’s trade, security and diplomatic interests.

The secret deal unveiled days ago has enraged the French, who accused the three partners of a ‘stab in the back’.

But Miss Truss said it could prove the model for a more ‘flexible’ post-Brexit foreign policy. Speaking to reporters while travelling to the UN General Assembly in New York, she said: ‘Now we’re an independent trading nation, we’ve got a real opportunity to be much more free and flexible about the way we use our policy to deliver for Britain.’

Today, she will meet her Iranian counterparts and will call for the ‘immediate’ release of Nazanin Zaghari-Ratcliffe.

Mr Johnson’s comments are a striking U-turn for a politician who spent years questioning whether man-made climate change exists.

Speaking to reporters during his trip to the US, the PM acknowledged he had changed his mind in the face of growing scientific evidence. He said he was convinced the world faced ‘catastrophe’ unless it acted.

‘If you were to excavate some of my articles from 20 years ago you might find comments I made about climate change that weren’t entirely supportive of the current struggle,’ he said.

‘But the facts change and people change their minds.’

The climate fund is seen as critical to the hopes of securing a deal in Glasgow to limit the rise in the global temperature to 1.5 degrees centigrade.

Earlier this week, Mr Johnson suggested the chances of hitting the funding target were just ‘six out of ten’.

But he received a major boost yesterday when President Biden doubled the US contribution.

Speaking at the UN, Mr Biden urged the world to turn from conflict towards cooperation.

He said: ‘Instead of continuing to fight the wars of the past, we are fixing our eyes and devoting our resources to the challenges that hold the keys to our collective future.’

Mr Biden described climate change and the continuing pandemic as ‘urgent and looming crises wherein lie enormous opportunities’ if the world can work together.

He warned the world will face further pandemics and without action on climate change, humanity will suffer ‘the merciless march of ever-worsening droughts and floods, more intense fires and hurricanes’.

The PM last night welcomed Mr Biden’s climate funding pledge as a ‘very good start’ that takes them ‘a long way towards the goal’.