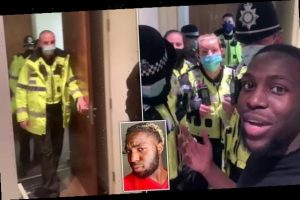 Police have apologised to YouTube star Canking after ‘up to 20 officers’ swooped on his city centre flat with three people inside when they received a false tip-off that he was holding a party during lockdown.

The 18-year-old, whose real name is Jayden Gray, said multiple cops turned up at his Birmingham flat last Wednesday after reports of people entering the premises.

Yet only three people were found inside the apartment when police arrived including his girlfriend, who was fined for breaking Covid restrictions, and his flatmate.

West Midlands Police said officers had responded to a tip-off from a member of the public and added: ‘We apologise if the tenant believed our response was excessive.’

Footage of the encounter was filmed by Mr Gray and clocked up more than 30,000 views on Instagram before eventually being deleted. 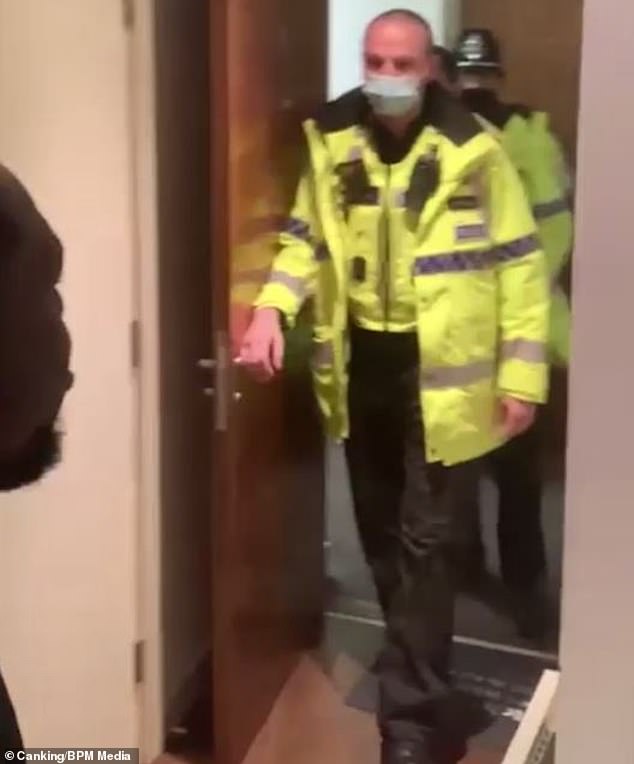 West Midlands Police officers pictured entering the flat of 18-year-old Canking, whose real name is Jayden Gray, in Birmingham last Wednesday. The force has since apologised

Mr Gray said: ‘I wasn’t breaking any rules, I wasn’t having any parties.’

Mr Gray previously hit headlines after hundreds of people flouted social distancing rules for a meet and greet with him in Birmingham city centre on June 28 last year.

Large crowds turned up outside the Bullring shopping centre and several arrests were made, including a 19-year-old who received a caution after throwing an egg at an officer.

Mr Gray, who was born in Ireland, launched a YouTube channel in January 2012 and has built up a massive online following who watch his public stunts and brazen interviews with strangers in the street.

He said he was in his apartment playing music ‘very low’ before the police arrived at 9.30pm. 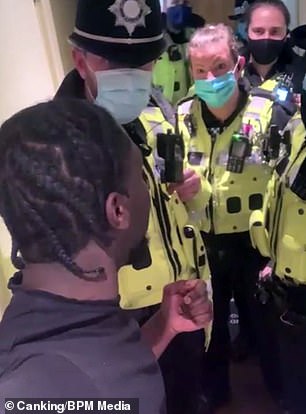 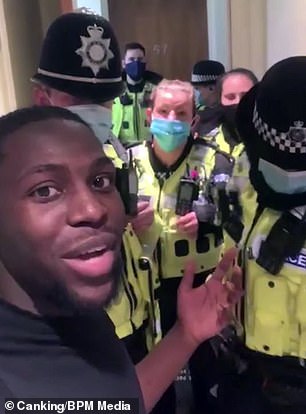 Mr Gray said he was in his apartment playing music ‘very low’ before the police arrived (left and right) at 9.30pm. He added that he was shocked by how many officers entered his flat

Mr Gray said: ‘I heard a knock at the door and went to look through the peephole. One of them put their finger (on) the peephole so I couldn’t see who it was.

‘I was asking over and over again who it was, but they weren’t saying anything and continued knocking.

‘I wasn’t going to open the door if they were not going to say who they were. So I walked away from the door and they continued knocking. 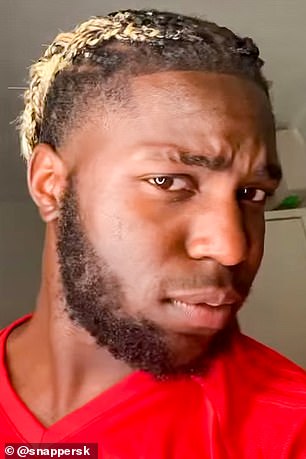 Mr Gray (pictured), who was born in Ireland, launched a YouTube channel in January 2012 and has built up a massive online following

‘I looked back through the peephole and the finger was not fully over it so I could see the police. I opened the door and was greeted with aggression.

‘There were five of them in the kitchen pressuring my girl. They said she shouldn’t be here.

‘One officer said something about spousal support but then another said: “No, we have to fine her”.’

Mr Gray said he was shocked at how many officers entered his flat and sought evidence of who was living at the property.

Mr Gray said: ‘A lot of them came in… I got my phone and started recording. At first 10 came and then way more were coming around the corner. There were at least 20 of them.

‘There was just three of us, me, my roommate, and my girl. If they expected a party it made no sense for everyone to enter the building. I live in an apartment on the top floor.

‘If there was a party, we couldn’t get out of the apartment because we’re not going to jump out.

‘I feel like they were trying to make a point.’

Mr Gray criticised police for sending so many officers. He said: ‘They didn’t handle the situation properly. 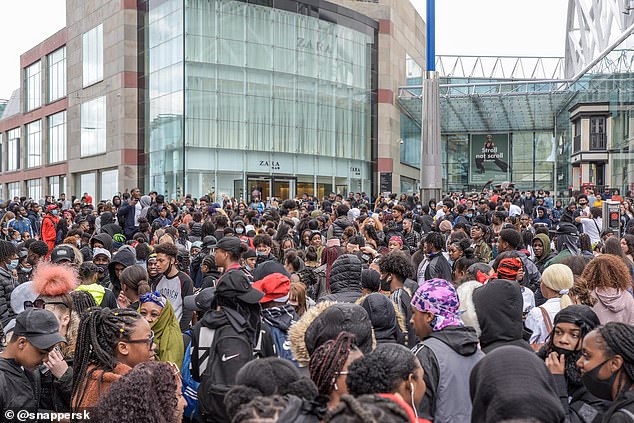 ‘If they got the call and expected a party that is completely understandable. But the way they handled it is not right.’

A West Midlands Police spokesperson said: ‘We received a call just after 10pm on Wednesday (13 Jan) from a member of the public concerned there was a significant Covid-19 breach at a flat in Navigation Street, Birmingham.

‘The caller suggested loud music was playing and there was a party being held at the address.

‘Officers attended but found only one person at the address who was not registered as living there.

‘An 18-year-old woman was issued a fine for breaching the lockdown restrictions.

‘We apologise if the tenant believed our response was excessive but we were simply responding to information provided to us.’

You can only leave home when it is necessary to shop, go to work and exercise once a day with your household, support bubble or one other person with social distancing.

You can also leave home to meet your support bubble or childcare bubble, if legally permitted to have one, seek medical assistance (including getting a Covid test) and attend education or childcare.

Those leaving home are advised to stay local by remaining in the town, village or part of the city where they live.

You cannot leave home to meet socially (such as for a picnic) with anyone you do not live with or have not formed a legally-permitted support bubble with (for if you live by yourself, for example).

You can only meet people you do not live with if it is for a legally permitted reason, such as to be with someone who is giving birth, providing care for disabled or vulnerable people and compassionate visits.

The children of vulnerable workers and essential workers can attend primary or secondary school and college.

All other children must stay at home and learn remotely until February half term. Early years settings will remain open.