Officers wish to speak with Sohail Khan, 24, Mosin Mahmood, 31, and Ishaaq Ayaz, 21, all from Birmingham, after two men were abused and then attacked with bottles.

The attack took place in the early hours of the morning on Sunday, August 15 after Rob and his husband Patrick were abused by the occupants of a passing car on Bromsgrove Street near the city centre.

They were then attacked, with one left unconscious and the other with cuts.

Officers wish to speak with Ishaaq Ayaz, 21, (left) Mosin Mahmood, 31, (middle) and Sohail Khan, 24, (right) all from Birmingham, after two men were abused and then attacked with bottles

West Midlands Police said extensive enquiries have taken place, including analysis of CCTV footage and witness statements, and it can now name the men.

Sergeant Marc Petford said: ‘We have already completed a number of arrest attempts for the men; I would encourage them to hand themselves in and speak to us.

‘This was a shocking homophobic attack on two men enjoying a night-out in our city.

‘It’s outrageous and we’re determined to bring to justice the people responsible.’

Police are urging anyone with information on the men’s whereabouts to get in touch, quoting log 552 of August 15.

It comes after the couple were left bloodied and bruised after the shocking 4am attack in Birmingham’s Gay Village have spoken of their ordeal. 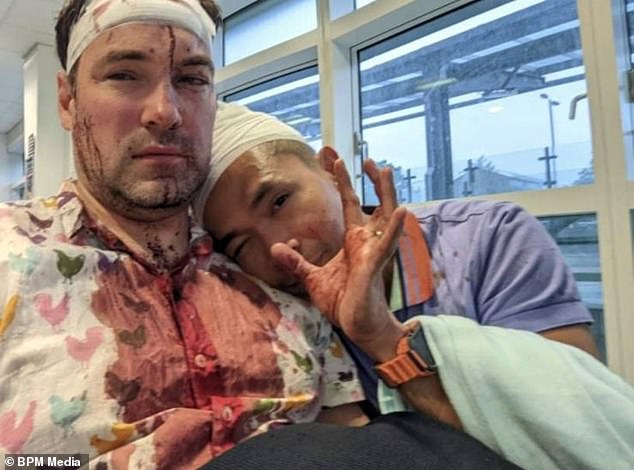 WARNING GRAPHIC CONTENT: Rob and his husband Patrick were celebrating a friend’s birthday and had just left Missing bar in Bromsgrove Street when they were targeted by the occupants of a black SUV

Rob and Patrick were celebrating a friend’s birthday and had just left Missing bar in Bromsgrove Street when they were targeted by the occupants of a black SUV.

The gang grabbed Patrick’s phone when he tried to film them after the abuse began, while a friend was dragged along the road and almost run over when she tried to retrieve it.

Patrick was knocked unconscious in the melee and Rob was attacked and beaten with bottles when the vehicle stopped after he chased it.

Earlier this week, Rob said the couple, both in their 30s and from Bicester in Oxfordshire, were recovering at home and he had taken time off work so a hand injury could heal.

Recalling the incident, he said: ‘They had no business in the Gay Village at 4am except for trying to start fights with gay people.

‘We had come up from Oxfordshire for a friend’s birthday party that night. It was a nice night out and there had been guys sat in front of the bar in a SUV.

‘We tried to be nice to them, I said: ‘Is it your birthday?’ or something, and they started yelling at us and calling us homophobic names.

‘Then my husband tried to record them and they stole his phone and took it inside the car. 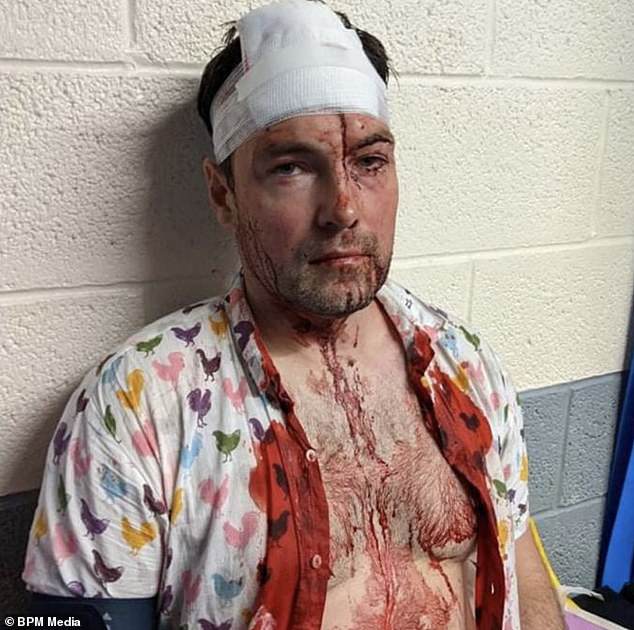 ‘When they were trying to get it back they drove off, knocking him over and dragging our friend down the road and halfway round the corner.

‘I chased after them and they got out of the car and had bottles and started fighting us.’

Their friend, who is in her 20s, suffered an injury to her foot after being dragged by the vehicle.

Rob said they were taken to a safe space within the Arcadian car park, where they were cleaned up and the police called.

‘They took statements and went away immediately to review CCTV and chase it up,’ he said.

They were then taken to hospital where they were stitched up and received further treatment.

‘I want to thank the police, hospital staff and our friends who helped get the word out.’

Insp Steve Lloyd, from Birmingham Police, said: ‘This was an absolutely appalling attack and robbery on people just trying to enjoy a night out in the city centre.

‘They’ve suffered homophobic abuse before being physically injured, and we are working incredibly hard to find those responsible.

‘We’ll be working closely with businesses in the area, and the Southside BID, to reassure them that we are taking this appalling hate crime very seriously.’

Andy Street, West Midlands openly gay directly elected mayor, said: ‘There is no place in our home for this disgusting, homophobic behaviour.

‘I’m sure the police will do all they can to catch the perpetrators and punish them with the full force of the law.’