Police are investigating the circumstances surrounding the deaths of two people in a light aircraft crash in Co Down, Northern Ireland.

Two people members of the Ulster Flying Club were pronounced dead at the scene after a crash at Newtownards Airport on Tuesday evening.

One eyewitness of the crash told the Belfast Telegraph the plane crashed into hedges located near the Cloud 9 restaurant after the pilot tried to land at the airfield.

Emergency services attended the incident at the airport at 8.20pm on July 19.

‘I was at the scene last night. Police were preventing anyone from getting access to the airport but you could see that a number of emergency vehicles were there,’ said Alliance Party councillor Vicky Moore, who lives near the airport.

‘This is a very rare occurrence bearing in mind the amount of activity there is at the airport.’

Specialist investigators from the Police Service of Northern Ireland are probing the deaths alongside a separate investigation by the Air Accidents Investigation Branch. 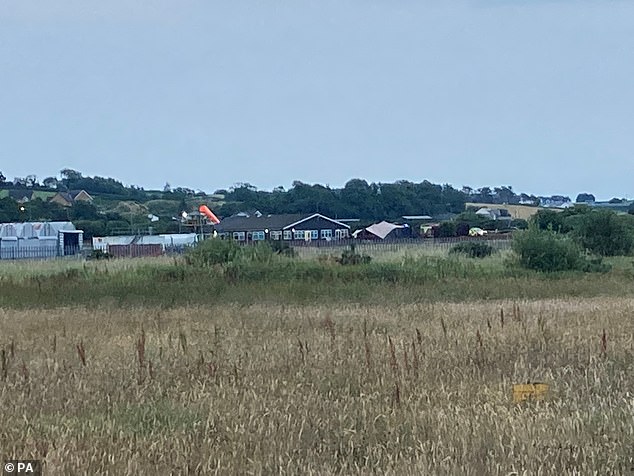 Police and emergency services attending Newtownards Airport in County Down

The names, gender and ages of those killed have not yet been released by the authorities.

In a statement the club expressed ‘great sadness and regret’ over the loss.

Local political representatives described shock in the community at the tragedy.

DUP MLA Harry Harvey said his thoughts are with the two grieving families and all those associated with the flying club.

‘The airfield is part of daily life in Newtownards. It is a valuable and busy facility used by people from a wide area.

‘People are shocked by what has happened and the thoughts are with all those affected.

‘There will obviously be a detailed investigation carried out and that will help shed light on what exactly occurred in this particular incident.’

Ulster Unionist MLA Mike Nesbitt said: ‘The airfield is a fixture of the town, situated right on the edge of the urbanisation, not miles and miles from the town centre.

‘So on a daily basis we are all used to seeing light aircraft and helicopters overhead.

‘This is, above all, a human tragedy and our thoughts are with the family members and friends who have lost loved ones.’

Moore lives near the airport and visited the scene following the crash on Tuesday evening. 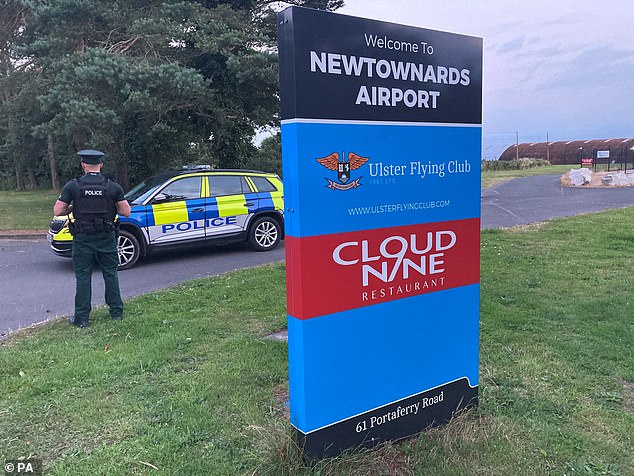 Police and emergency services attending Newtownards Airport in County Down, following a crash involving an aircraft

She said: ‘It is a huge shock to the community and obviously all our thoughts are with the families of those who have been affected and particularly those that have died in the accident.

‘Really the airport here in Newtownards is part of the community, it is very busy, it has been a fixture in the town for a very, very long time.

‘Local people are used to the activity at the airport and this will be a terrible shock to them.’

She added: ‘I live under the flight path, probably about 10-15 minutes’ walk away.

‘It is mostly flying schools who use it, pleasure flying, small, independent and private aircraft use it.

‘The airfield is so popular, it is not expected that something like this would happen.’

A police spokesperson said enquiries are continuing on behalf of the coroner.

They have appealed to anyone who was in the area at the time, or who may have any dashcam or other kinds of footage, or any information which could assist us with enquiries, to contact 101 and quote reference number 1932 of 19/07/22.