A veteran road safety expert says police made the right call not to pursue a wayward driver as he careered through the Bourke Street Mall on Thursday as officers now hunt the missing man and his runaway passenger.

The four-minute incident, which police say was an attempt to evade officers and not to threaten the public, reignited community fear several years after two murderous attacks claimed the lives of seven people on the same shopping strip in the heart of Melbourne.

But John Lambert, who has previously been involved in reviewing police pursuit policies across the country, said chasing a driver for minor traffic matters would never be worth the risk it could cause to public safety. 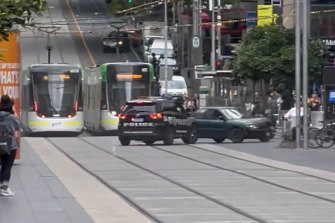 “The level of death and serious injury to innocent members of the public is already far too high for police pursuits,” he said. “People would’ve been put at serious risk [on Thursday] simply because a person was found to be driving a car with stolen plates fixed.

“The fact police decided not to pursue the driver was a great decision. Let them go and use other methods to track them down.”

Police Assistant Commissioner Luke Cornelius said an initial review of Thursday’s incident found that patrolling police tried to pull over the driver of a green Mitsubishi Lancer on Swanston Street just before 5pm, believing the vehicle had incorrect number plates. 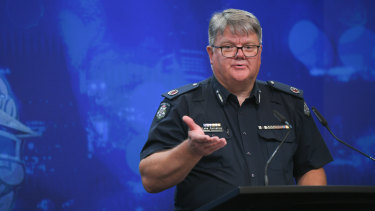 Blocked by two trams, the officers from the public order response team activated their blue and red lights when the driver suddenly turned left into the Bourke Street Mall, he said.

Officers briefly left their car and drew their firearms before a risk assessment determined the wanted driver was attempting to evade police and not harm pedestrians.

As the driver performed a U-turn and struck a bollard outside Myer, his passenger escaped on foot towards Elizabeth Street before the car headed back down Swanston Street.

Mr Cornelius said the officers lost sight of the car before it was seen on Little Lonsdale Street and then in Southbank. It was later dumped at Albert Park.

The driver and the passenger remained on the run on Friday night. 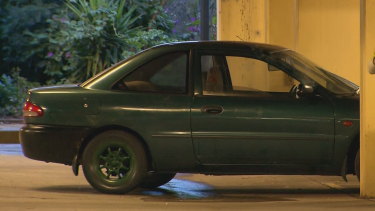 Police said the abandoned car was found in Albert Park on Thursday night, minus the number plates.Credit:Nine News

In acknowledging public concern over the incident, Mr Cornelius said Victoria Police had learnt a lot since Bourke Street attacks by James Gargasoulas on January 20, 2017, and Khalif Hassan Shire Ali on November 9, 2018.

He said officers quickly realised on Thursday that the driver was trying to escape police and not seeking to harm pedestrians.

“We’re more than satisfied that this was an evade as opposed to a hostile vehicle attack,” Mr Cornelius said.

“We do though have a significant concern about crooks who make deliberate choices to get away from police and in doing so expose our members and members of the community to significant harm and risk.

“We won’t let you get away with that. We will come after you.”

On the back of Gargasoulas’ murderous 2017 Bourke Street attack, Victoria Police in 2019 introduced a hostile vehicle policy to give rank and file officers the clearance to shoot at or ram a wayward driver if it was deemed they posed a serious danger to the public. 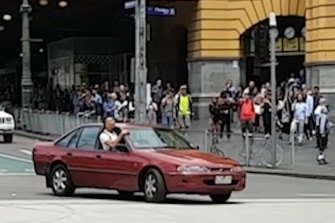 There have also been changes to the force’s pursuit policy, with senior police now required to give clearance to front-line officers wanting to pursue a driver.

But police union boss Wayne Gatt said no amount of police policy change could stop some people from doing dangerous and reckless things.

“We don’t get the opportunity to control everything and when you review incidents like Thursday’s you have to look at it through that prism,” he said.

“Some people will do stupid things, bad things and commit horrific acts at times.

He said stopping runaway drivers was an emotive debate. But he backed the actions of police on Thursday in making decisions based on risk and not solely on the location of the driver. 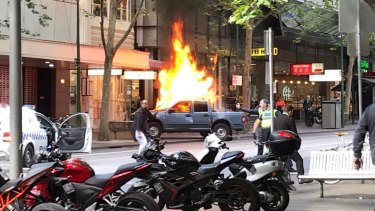 Hassan Khalif Shire Ali set a ute on fire in Bourke Street before going on a stabbing rampage in November 2018.

“There’s not ever going to be a solution that’s water tight. It’s about that risk assessment made … in a split second of time,” Mr Gatt said.

“It speaks volumes to their professionalism and their training.”

Police Minister Lisa Neville said the police had put in place many changes around policy, training and oversight since the Gargasoulas attack and a subsequent coronial inquest to improve future responses to similar situations.

These included the opening of a new police station in Bourke Street,she said.

“We know this incident must have been incredibly distressing for anyone in the vicinity of Bourke Street Mall yesterday and I want to thank the police officers who responded to what was a very challenging incident.”