Police spying on motorists from an unmarked HGV have caught hundreds of drivers breaking the law.

Officers used a ‘stealthy’ lorry’s cab height to look inside vehicles and see if drivers were wearing seat belts or using mobile phones and satnavs.

They found some motorists completely disregarding safety rules, with one driver caught using his elbows to steer and another using his dashboard as his filing system.

Another man was watching music videos while behind the wheel and a woman was seen doing her makeup in the fourth lane of the M25, police said. 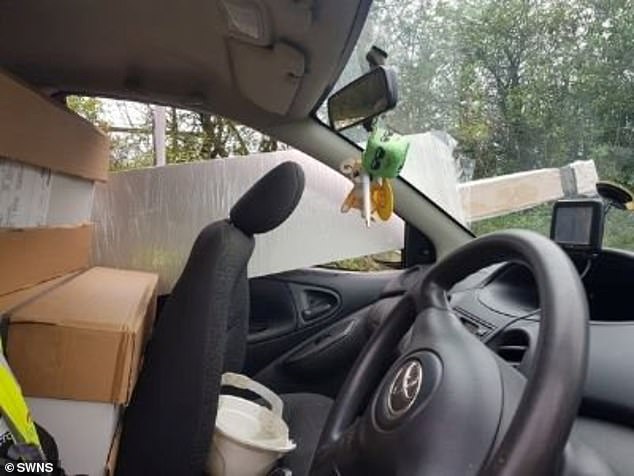 Police spying on motorists from an unmarked HGV have caught hundreds of drivers breaking the law in a shocking variety of ways. Pictured: DIY equipment unsafely packed into a van that was driving along the M25

During nine days over the past month-and-a-half, Sussex and Surrey Police spotted more than 300 different drivers committing offences.

One officer sat behind the wheel of the HGV, while another watched out for dangerous or distracted driving and recorded footage of concerning incidents.

The ‘observer’ officer then relayed the information to another police vehicle travelling behind, which intercepted and told the suspect driver to pull over. 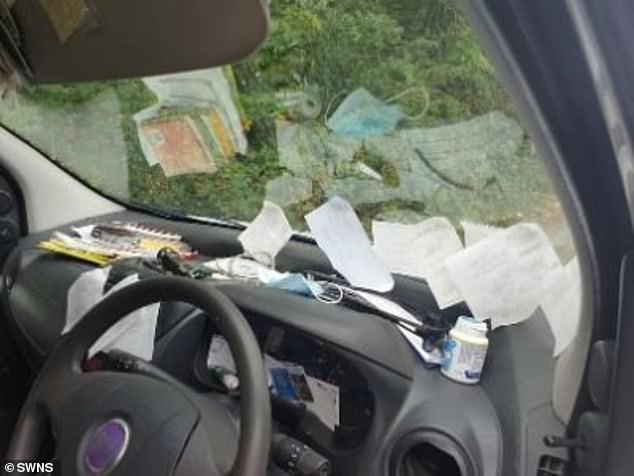 During nine days over the past month-and-a-half, Sussex and Surrey Police spotted more than 300 different drivers committing offences. Pictured: One van driver was found using his dashboard ‘as a filing system’

Offences included not being in proper control of a vehicle, driving on the hard shoulder, driving without due care and attention as well as seatbelt offences.

Another 86 offences of not being in proper control of a vehicle were also reported – the majority of which involved drivers using satnav or maps on their mobile phones.

Chief Inspector Michael Hodder, head of the joint Surrey and Sussex Roads Policing Unit, said: ‘Drivers shouldn’t become complacent or take risks purely because they can’t see a marked police car on our roads or they think we can’t see what’s happening inside their vehicle.

‘Using unmarked vehicles including the Highways England HGV cab allows us to catch those putting not only their own lives at risk, but also those around them.’ 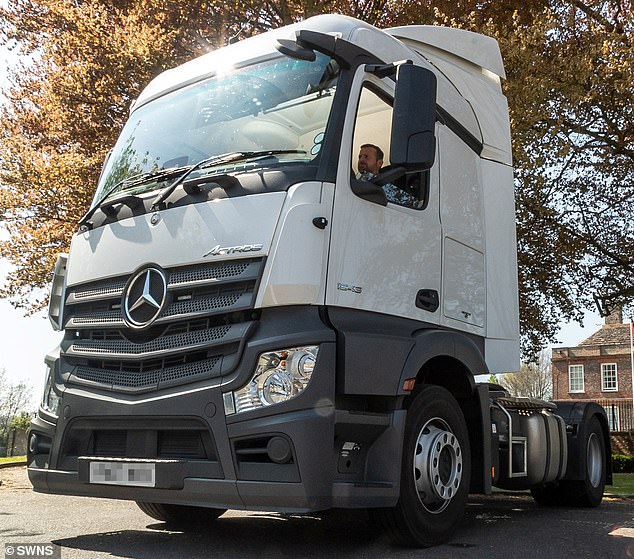 Police say the unmarked HGV cab, which was loaned to forces by Highways England, is used to target distracted drivers and ‘gives officers the ideal view of what’s going on inside cars from above’.

Six members of Sussex and Surrey Police’s Roads Policing Unit have recently got their HGV licence so they can carry out similar undercover operations more often, the force said.

Sergeant Kellie-Anne Harris, of the newly formed Commercial Vehicle Unit, added: ‘The higher vantage point the HGV cab gives us is incredibly useful when it comes to looking down at what drivers are up to in their vehicles which might otherwise be obscured at ground level.

‘It also allows us to see directly into other HGV or large vehicle cabs which would just not be possible with other vehicles in our fleet.

‘Along with 65 uses of a mobile phone, 43 seatbelt offences and 25 speed offences, we saw some truly staggering things like someone using their elbows to steer, a man watching music videos and a woman doing her makeup in lane four of the M25.

‘One gentleman was using his dashboard as his filing system and another driver was transporting DIY equipment unsafely along the M25.

‘The drivers were given words of advice and rectified their mistakes before being allowed to continue their journeys.’

Operation Tramline as it was branded will be carried out again on motorways and major roads in the future as Surrey and Sussex Police look to reduce collisions and improve road safety, the forces said.