Pope Francis tells couples not to have sex before marriage

Pope Francis has told couples not to have sex before marriage in a new Vatican guide which explains what the church views as requirements for a successful union.

The leader of the Catholic Church argues in the preface of the new document for priests and dioceses working with engaged couples that ‘chastity teaches the timing and the method of true love’.

He also claims that modern unions ‘fall apart’ quickly and chaste couples are able to learn how to be together without the pressure of sexual relationships.

This teaching also helps when couples are older, Pope Francis adds, explaining it helps them in sexless periods late in life and should apply even if engaged couples are living together.

The 97-page document, published on Tuesday, and called the Catechumenal Itineraries for Married Life ‘is a gift and it is a task’, the Catholic Church’s leader said.

This move has not been without controversy, The Telegraph writes, and appears to be in contrast with the Pope’s openness towards divorced and same-sex couples. 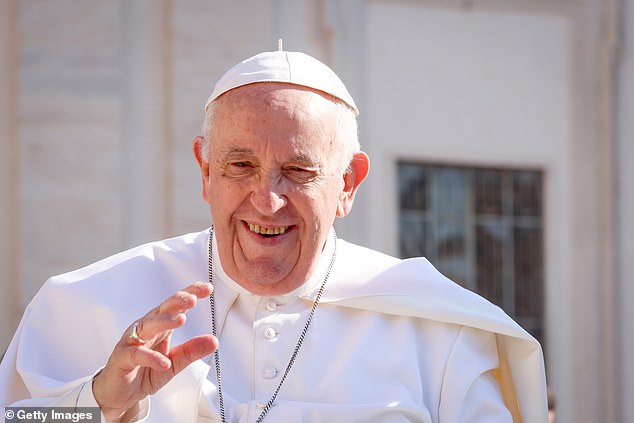 Pope Francis said in the text given the high rates of divorce and fewer marriages in recent years there is a need for ‘renewed pastoral commitment’.

The document goes on to say: ‘The Church must never fail to dare to propose the precious virtue of chastity, even though this is now in direct contrast with the common mentality.

‘Chastity must be presented as an authentic ‘ally of love’, not as its negation.

‘Chastity teaches married couples the times and ways of true, delicate and generous love, and prepares them for the authentic gift of self to be lived for the whole of their life in marriage,’

And within marriage sex is encouraged: ‘Fecundity is a gift, an end of marriage, for conjugal love naturally tends to be fruitful,’ states the catechism.

In recent years, divorce has been increasing in England and Wales and now leads to one in three marriages ending, according to figures between 1964 and 2019. 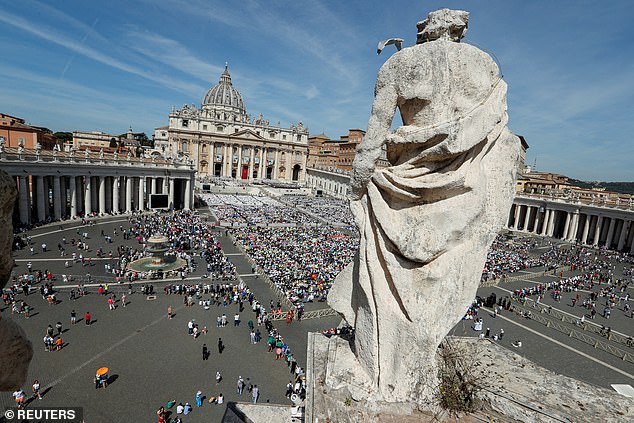 General view of the St. Peter’s Square during Holy Mass as Pope Francis canonises ten new saints at the Vatican, May 15

Most people were on average married 11.9 years before they got a divorce, 2020 ONS figures also show.

But theologians have criticised the Catholic Church’s view as outdated and not good for modern marriages.

Vito Mancuso, an Italian theologian, said: ‘To exclude [sex], as Catholic doctrine has always done, is a grave ethical error.’

He also hit out at ‘the Catholic Church’s inability to understand sexuality. In this, Pope Francis is no different from his predecessors.’

Father Alberto Maggi, another theologian, told La Repubblica newspaper: ‘Documents like this … are a step backwards.’

He added: ‘[It] should listen more to the reality of young people today, of how they live, before reissuing the doctrine they have always proposed.’

Austen Ivereigh, a British expert on the Catholic Church, claimed this was nothing new: ‘This is not a prohibition or a new rule. They are inviting people to follow this path. They know it goes against the grain of society. The Church understands that nowadays most people cohabit and have sex before getting married.’

And he agreed with church’s view that it could avoid ‘the incredibly high divorce rates that we see in society’.

Pope Francis told a gay man in 2018, the Times said, that ‘God made you that way and loves you as you are’ and in 2016 made it easier for people to get married after being divorced if the marriage was ‘irreparably broken’.