Portland Police Association Executive Director Daryl Turner argues one reason why members of the Rapid Response team resigned is that some elected officials did not support officers during the more than 150 days of riots in the city.

Portland Police Association Executive Director Daryl Turner argued on “Fox News Live” Sunday that elected officials “encouraged and enabled some of the violence'” that was taking place over the more than 150 nights of riots in Portland, explaining part of the reason why all 50 members of the Portland police riot squad known as the Rapid Response Team (RRT) resigned.

A Portland Police Bureau (PPB) statement indicated that the resignations were effective as of last Wednesday, and it’s unclear what implications would be for law enforcement response to future demonstrations in Portland, although Turner stressed that the officers have resigned from their voluntary positions on the Rapid Response Team, but will “still be doing the same job” and will “be ordered to do the same job, just a little bit different.”

Portland Deputy Police Chief Chris Davis had said that the police department will make sure that there are “as close to adequate resources as we can get within just the limits that we have to deal with anything that comes up with on-duty resources.”

All of the members of the Portland Police Bureau’s highly trained rapid response unit, which had responded to riots, resigned last week after the recent indictment of Officer Corey Budworth for allegedly assaulting a photographer during an overnight riot last summer.

On Tuesday, a Multnomah County grand jury charged Budworth with one count of fourth-degree assault related to the Aug. 18, 2020, incident.

That night, according to the Portland Police Association, about 200 demonstrators, many equipped with tactical helmets, face coverings, and armed with a variety of weapons, descended on the Multnomah Building in southeast Portland. Multiple dumpsters were set on fire, buildings were defaced, and windows were broken. A riot was declared at the planned event after someone from the crowd launched a Molotov cocktail into the building and set it ablaze.

“After nearly 75 consecutive nights of violence, destruction, and mayhem, a small group of RRT (Rapid Response Team) officers — including Officer Budworth — were again tasked with dealing with the riot,” the Portland Police Association said. “Per PPB Command Staff orders, RRT officers cleared the rioters from the area to allow the Fire Bureau to extinguish the blaze. But the rioters were not satisfied.”

According to the union, rioters regrouped and began marching back toward the building. As the Rapid Response Team was working to clear the area, Officer Budworth “was forcefully knocked to the ground” and officers deployed pepper spray and less lethal munitions as the crowd grew more aggressive.

Several rioters interfered with an officer attempting to place one person under arrest.

“RRT officers, including Officer Budworth, used their Police Bureau-issued batons to try and stop the crowd’s criminal activity,” the union’s description of events continued. “Per his training and in response to the active aggression of a rioter interfering with a lawful arrest, Officer Budworth used baton pushes to move a rioter, now known to be Teri Jacobs, out of the area.”

Jacobs, an activist and photographer, fell to the ground. Cell phone video showing Budworth striking Jacobs in head from behind quickly circulated on social media. But the union said the blow to the head was an accident on the officer’s part and he used the lowest level of baton force.

“Reasonably believing that she was getting back up to re-engage in her unlawful activities, Officer Budworth employed one last baton push to try and keep her on the ground, which accidentally struck Ms. Jacobs in the head,” the union said. “The location of Officer Budworth’s last baton push was accidental, not criminal. He faced a violent and chaotic, rapidly evolving situation, and he used the lowest level of baton force — a push; not a strike or a jab — to remove Ms. Jacobs from the area.” 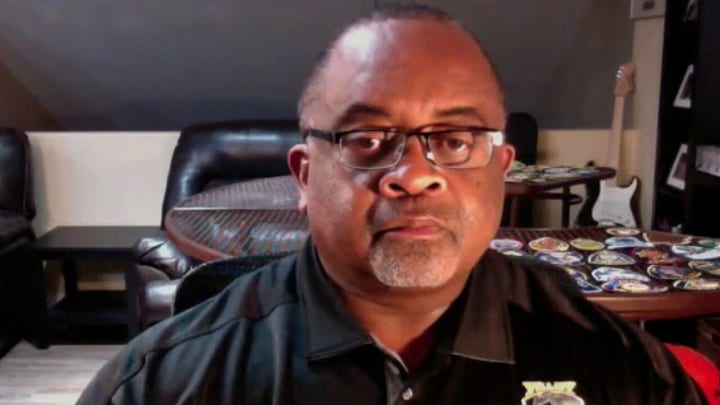 Turner stressed on Sunday that the message the officers sent by resigning from the team “is not just about our officer being indicted.”

He said that the Portland Police Association, which represents the Rapid Response Team members, sent a letter to the city of Portland in October “stating all the issues and problems and concerns that they had based on what happened over 150 days, during the “unprecedented sustained violence in the city of Portland.”

He stressed that “our rapid response team along with others from the police bureau came out every night [and] stood the line with … Molotov cocktails, urine, feces, rocks, bottles, everything else thrown at them.”

Turner added that families of officers were also threatened.

The Multnomah County District Attorney’s office, which covers Portland, said 1,108 criminal civil unrest cases were referred to them between May 29, 2020, and June 11, 2021 and that 891 criminal cases were rejected, KATU-TV reported.

The District Attorney’s office reportedly has issued 194 cases and, so far, nine of them have been resolved with 28 cases pending review by a deputy district attorney to determine a charging decision.

Turner stressed on Sunday that he does not believe the city of Portland supported the police department during the riots and instead “actually encouraged and enabled some of the violence that was going on during those 150 plus nights.”

“The residents and the business owners of the city of Portland have a hopeless feeling right now with what’s gone on,” he said, noting that the police department is “understaffed” and has been “defunded.”

“Our district attorney’s continuing not to prosecute cases of crimes being committed during those riots,” Turner continued. “And the big thing is our city council refuses to allow us to have body cameras, which would show the whole event. The total event.”

Regarding the officer that was indicted, only a “snapshot of the event” was captured because officers do not have body cameras, he said. 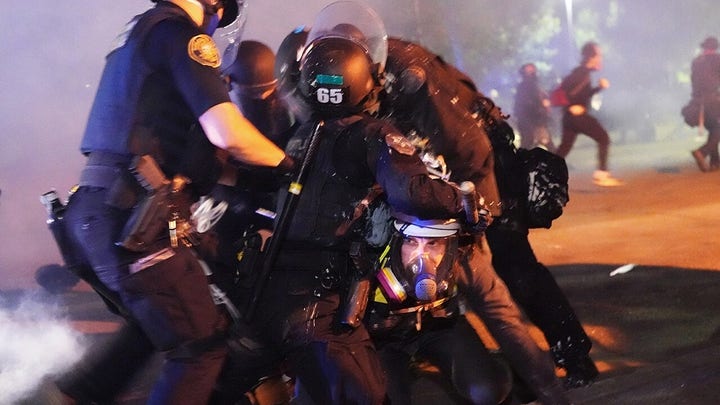 “We’re one of the largest cities in the country whose police agency doesn’t have body cameras,” Turner said. “Our city council refuses to do it.”

He argued that “it’s not a budgetary issue,” but rather that “they’re afraid that the body cams will show the false narrative being neutralized and the fact [that] we don’t have a brutal police force.”

Turner went on to argue that some members of the city council “want to have their false narrative and self-serving agendas and that’s what’s hurting our city.”

He also said he believes that is one of “many” reasons the “Rapid Response Team stepped down.”

Spokespeople for Portland Mayor Ted Wheeler and the city council did not respond to Fox News’ request for comment.