Prepare for a 'YEAR' of airport hell, travel experts warn

Prepare for a ‘YEAR’ of airport hell: Travel experts warn of ‘nightmare’ disruption for millions of UK families flying to Europe and the US over the next 12 months due to staffing shortages caused by Covid

Industry chiefs have warned British holidaymakers hoping to fly abroad at any time this year to brace for 12 months of travel hell due to unprecedented airline staff shortages caused by Covid self-isolation and mass layoffs during the pandemic.

Experts said that airlines ‘are simply unable to cope with that demand due to a lack of resources’ and warned that the ‘nightmare’ disruption – of the sort seen over Easter, where hundreds of flights were cancelled by airlines including British Airways and easyJet – could last all year.

BA has axed hundreds of flights up on some routes to the US and the Far East until September, affecting thousands of travellers after it had already cancelled more than 1,000 flights in little more than three weeks.

Routes affected have included from London to Berlin, Dublin, Geneva, Paris, Stockholm, Athens and Prague. The flagship carrier axed another 200-plus flights over yesterday and on Wednesday, affecting an estimated 20,000 passengers.

There are fears that other carriers could also be hit with issues after easyJet cancelled hundreds of flights over Easter.

Kully Sandhu, managing director of Aviation Recruitment Network, told the Express: ‘In my opinion, it could be up to 12 months before we see staffing at airports back to pre-pandemic levels. Recruitment for people at airports takes longer than roles elsewhere because of necessary, additional security and background checks.

‘Routine recruitment campaigns ground to halt during the pandemic and have been slow to start again as international travel has had a number of restrictions on it until recently. That means the recruitment pipeline was cut off and needs to be re-established.

‘Aviation has lost its appeal, not only for returners but also for people who have never worked in an airport environment before.’

George Morgan-Grenville, chief executive of Red Savannah Luxury Travel, added: ‘It is an unfortunate perfect storm and airlines and airports are trying to ramp up again after the pandemic. 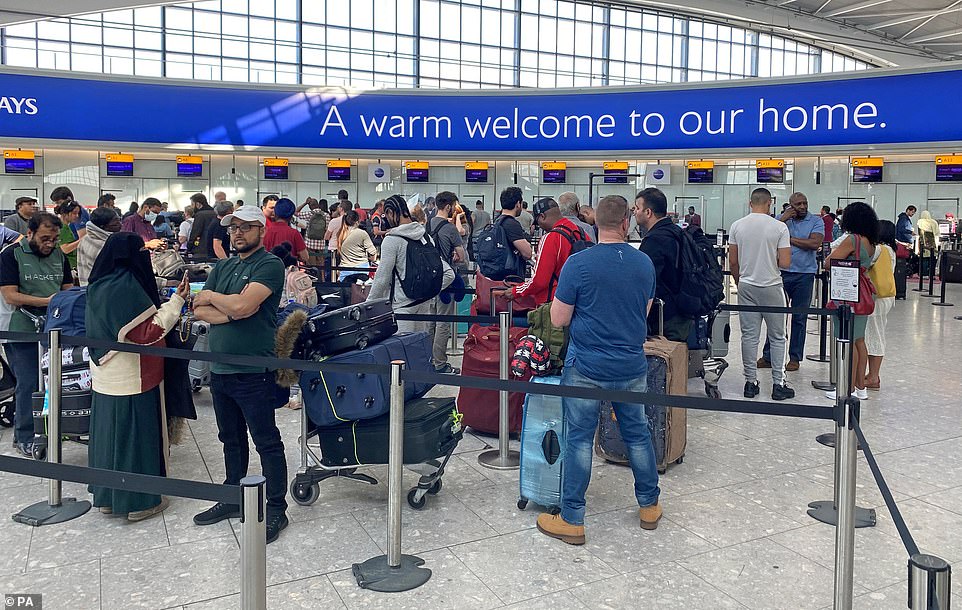 Passengers queue inside the departures area of Terminal 5 at Heathrow Airport in London, during the Easter getaway, April 15, 2022 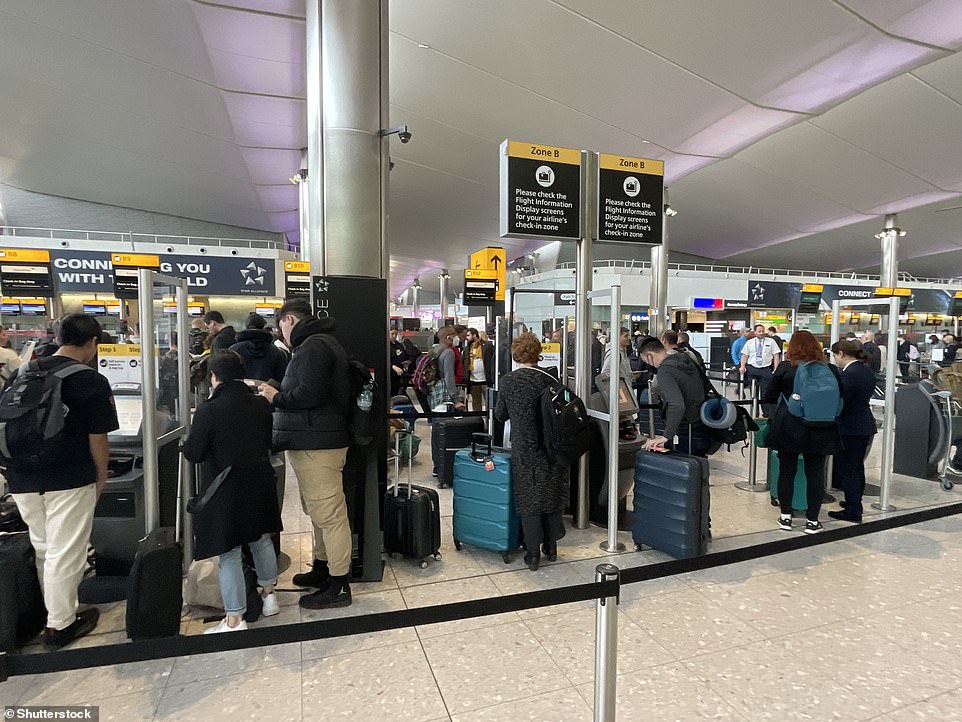 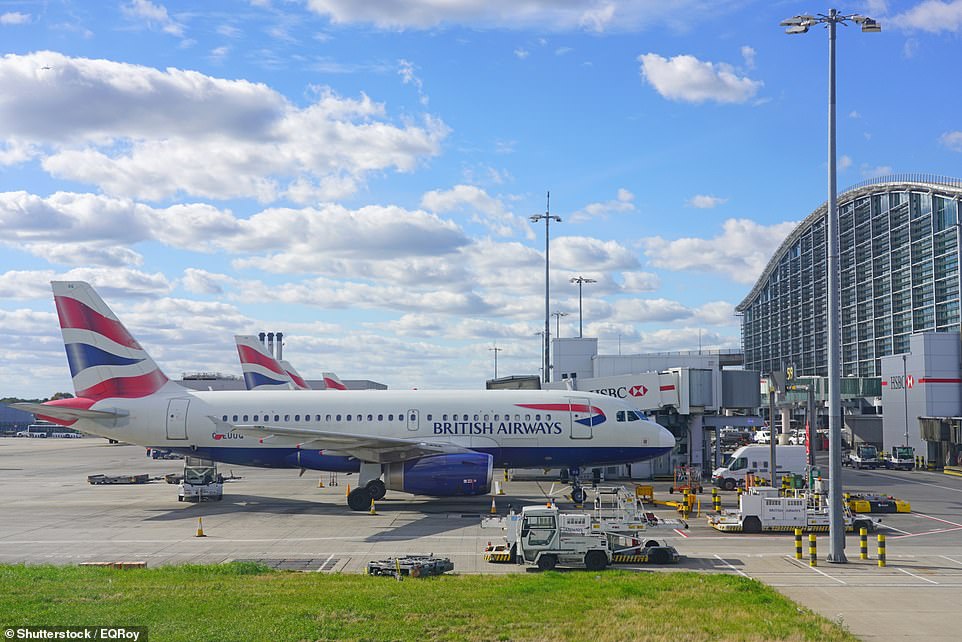 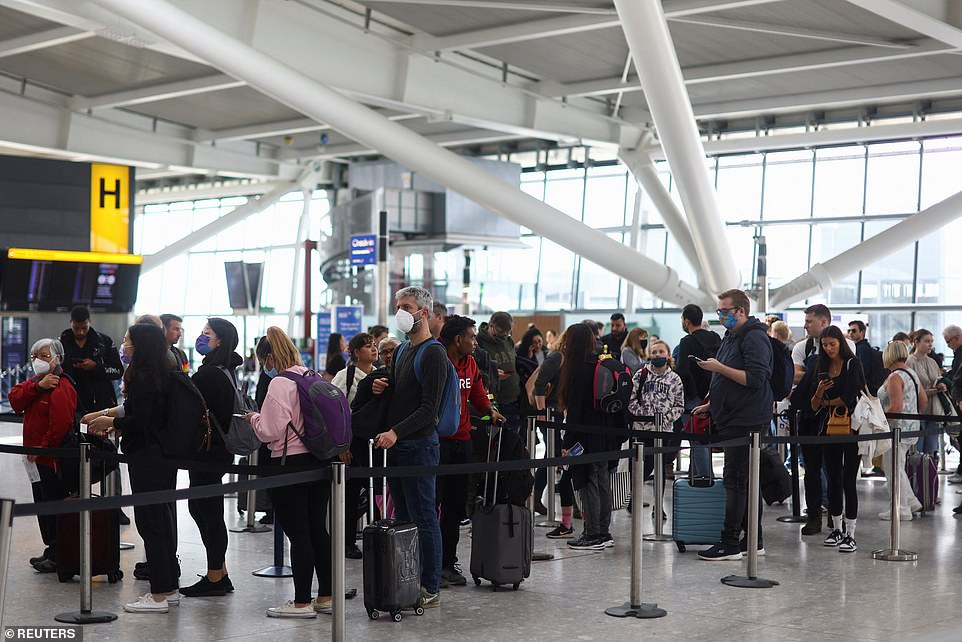 Passengers queue to enter airport security ahead of the Easter Bank Holiday weekend, at Terminal 5 of Heathrow Airport, April 14, 2022 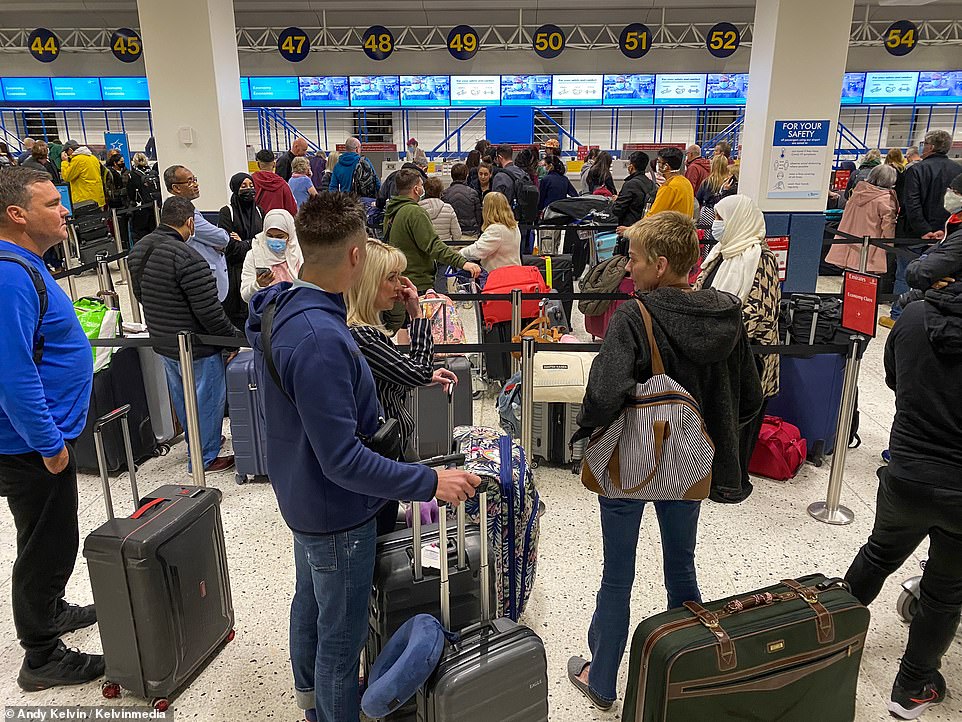 One of P&O Ferries’ biggest cross-Channel ships that had been seized in Dover over safety concerns has now been cleared to sail, as the disgraced company attempts to resume normal operations after sacking nearly 800 employees.

The Maritime and Coastguard Agency (MCA) said that the 700ft long Spirit of Britain, which can carry up to 2,000 passengers and was the first of two ‘Spirit’ class ships built for P&O Ferries, ‘has been released from detention and can commence operations when P&O Ferries are ready’.

The ship’s detention at the Port of Dover, along with that of the Pride Of Kent vessel, caused a shortage of ferry capacity in the run-up to Easter on the key Dover-Calais crossing and sparked massive queues of lorries on coastbound roads in Kent.

A total of eight P&O Ferries vessels have been probed by the MCA since P&O Ferries sensationally fired nearly 800 seafarers with no notice via a Zoom video call last month – an action even the operator’s millionaire boss Peter Hebblethwaite admitted was illegal in testimony to MPs – and replaced them with cheaper £5.50-an-hour foreign agency workers.

The Spirit of Britain had been held earlier this month and P&O Ferries were requested to fix ‘a number of’ safety issues raised by the assessment before the MCA carried out a second inspection.

The MCA said it began assessing European Highlander on Thursday and Norbay on Wednesday. The European Highlander, which normally operates between Larne in Northern Ireland and Cairnryan in Scotland, will be allowed to resume voyages once a ‘small number of deficiencies’ are fixed.

A third vessel called the Norbay, which serves the Liverpool-Dublin route, was also cleared to sail earlier yesterday, the MCA added.

‘The travel industry is not an industry that can be turned on and then off again and it was inevitable it was going to take time. My own feeling is I don’t think we are going to see a problem-free summer by any stretch of the imagination. If it is as bad as it has been purported to be, I think you will get a lot of very upset people.’

The transport chaos over Easter saw flights to destinations into Europe and the US cancelled by BA and easyJet as they were hit by Covid absences, lack of staff and a surge in demand for travel as restrictions were lifted.

Industry experts have also pointed the finger at security checks for issues with staff numbers, with vetting for new staff taking up to twice as long as the 14 weeks it is supposed to. They also believe that loss of thousands of experienced staff who were laid off during the pandemic has had an impact, with many not returning after finding jobs elsewhere.

BA boss Sean Doyle originally told staff in an internal message that flights would be cancelled until the end of next month, partly due to staff shortages.

At the World Travel and Tourism Council’s summit in Manila in the Philippines, Paul Charles, of travel consultancy The PC Agency, suggested disruption could last many months.

‘Covid travel restrictions have brought about a destruction of talent through job losses,’ he said.

He also told the Telegraph: ‘In the short-term you have got Covid [absence] which is becoming less of an issue, but in the longer term, there are still complications over recruiting enough staff.

‘BA is only recruiting staff who already have security passes. The airline’s planners obviously believe there is a maximum number of people they feel they will recruit, therefore it has to cut back on frequency now based on its expected level of recruitment.

‘It is readjusting in order to give as much notice as it can before it’s inevitable that they have to cancel those flights anyway. It is responding to concerns expressed by their customers and Government ministers about the lack of notice given to consumers.’

More than 1,140 flights were grounded at Heathrow, Gatwick, Manchester and Birmingham during the Easter getaway – with EasyJet and British Airways both cutting 60 and 98 flights respectively in a single day.

This week it emerged that BA is cancelling half of flights between Heathrow and Miami, reducing them to one each way a day from June 4 until September 7. BA said the cancelled daily flight to and from Miami would be picked up by American Airlines.

In an email to customers the airline apologised and said: ‘We’ll do everything we can to get you where you need to be.’

It is not yet clear how many other BA flights will be axed over the summer. Passengers who have their flight cancelled are entitled to a full cash refund or the airline should book them on another flight with a take-off time as close to the cancelled flight as possible.

The airline slashed thousands of jobs during the pandemic.

Some easyJet and Ryanair customers have also taken to social media to report their flights being cancelled.

One wrote: ‘Could @easyJet make it any more difficult to get in touch with them? The cancelled my flight there but won’t let me cancel the return flight back?’

A second said: ‘@easyJet AWFUL – can you please explain why my outbound flight to Cagliari on the 10/05/22 has been cancelled with less than a months notice? Would appreciate a response as this is the third tweet I have sent and have been ignored.’

While a third added: ‘ @Ryanair Hi I need a solution to the cancelation of my flight to Venice. Twice you have cancelled (22 and 23 of April) without a solution. We don’t have options now to go and we are costing all the extras expenses.’

Despite the social media furore, easyJet told MailOnline in a statement: ‘We are planning to operate our normal summer schedule which is on average around 1700 flights a day this summer.’

Mr Charles said: ‘Airlines are certainly seeing a high level of demand to fly, but are simply unable to cope with that demand due to a lack of resources. It’s a nightmare situation for airlines and airports at the moment.’

Martin Chalk, general secretary of the pilots’ union Balpa, also told The Telegraph: ‘The chaos witnessed at British airports may well be repeated throughout the summer because airlines, laden with debt… have not yet rehired enough staff.’ 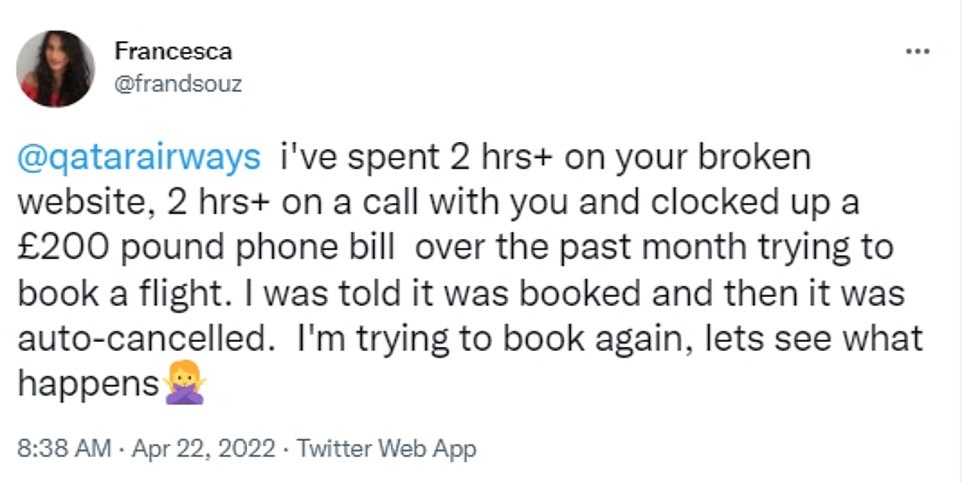 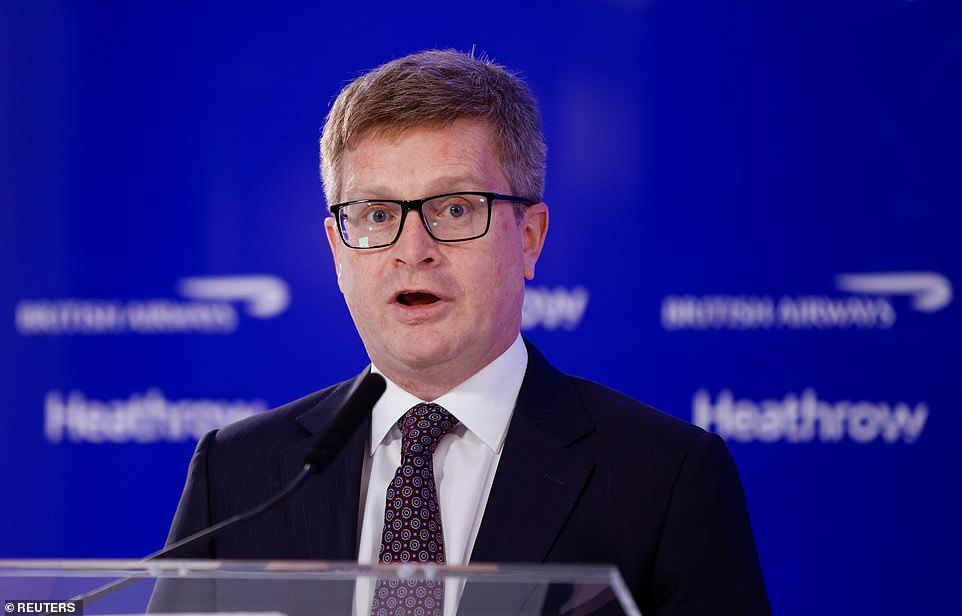 The rise in bookings is overtaking the number of airline staff being hired, which is being further exacerbated by security checks.

An industry source further blamed the vetting process, saying it can take up to six months before someone is able to come in and do a job at an airport.

But a spokesperson for the Department for Transport (DfT) contended the ‘aviation industry is responsible for resourcing at airports’, adding: ‘They manage their staff absences, although we want to see minimal disruption for passengers during the Easter period.

‘The requirement for Counter Terrorist Checks for aviation security staff is important for the protection of the travelling public and the Government continues to process these security clearances in a timely manner.’

Speaking at a global industry summit in Manila in the Philippines, Julia Simpson, CEO of the World Travel and Tourism Council (WTTC), acknowledged ‘that there are concerns’ about BA’s recent performance.

But the former BA executive and Downing Street advisor added: ‘I think these are more wrinkles as we pull out of the pandemic and rebuild.

‘BA remains a great airline. It’s one of the greatest airlines in the world and I think they’re just facing issues as they come back post-pandemic. Not all the issues are of their own making.’

She said airline staff shortages, behind much of the disruption, had been exacerbated by delays to security and anti-terror checks. These must be carried out by Government officials for every new aviation sector recruit but are currently taking longer than usual following a spike in applications.

The future of BA boss Sean Doyle was thrown into doubt yesterday after the airline’s owners talked about sacking him because of a string of blunders.

Sources said the board of International Airlines Group (IAG) discussed the possibility at its most recent monthly meeting.

IAG directors are particularly concerned about a lack of investment in IT. Last month BA had its third computer meltdown this year and 1,000 flights were cancelled or delayed over one weekend. 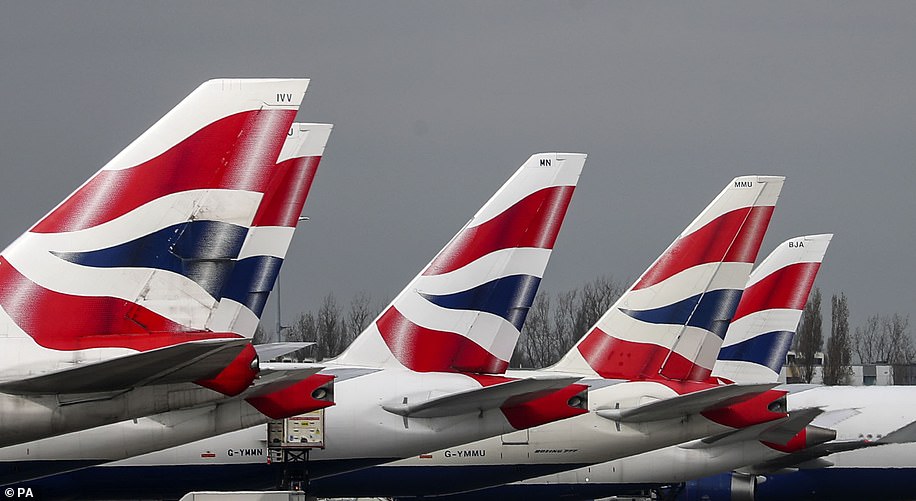 More than 1,000 have been cancelled since, partly because of staff shortages after it cut thousands of jobs in the pandemic.

Passengers say that they have also been unable to get through to customer services or check in online.

Others waited days to be sent luggage that could not be unloaded from planes.

IAG was asked twice if it denied discussing Mr Doyle’s future at a board meeting, but declined to comment.

A statement said: ‘The IAG board and its CEO fully support Sean Doyle.’