A pride-month event at a Dallas gay bar inviting children to take the stage alongside drag queens was met with outrage and encouragement alike over the weekend.

The event, titled ‘Drag The Kids To Pride,’ was held at the Mr. Misster gay nightclub in North Dallas on Saturday morning.

The event invited parents to bring their kids along for a morning drag show, and featured children dancing alongside men dressed in drag beneath a pink neon sign reading ‘It’s not gonna lick itself.’

Outraged protesters arrived to picket the event, while the shows promoters and participants defended the day as nothing more than an opportunity for people to share joy about who they are. 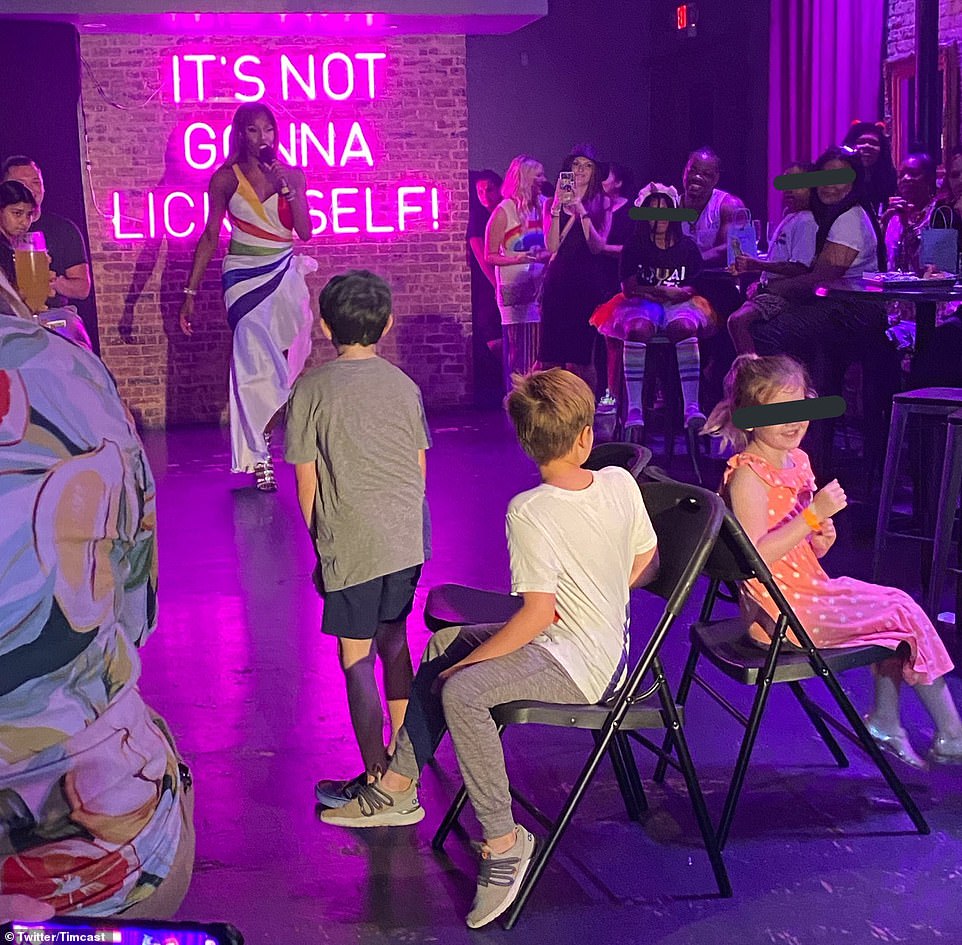 Three children on stage at the gay nightclub Mr. Misster in Dallas, Texas, during their ‘Drag the Kids to Pride’ event on Saturday 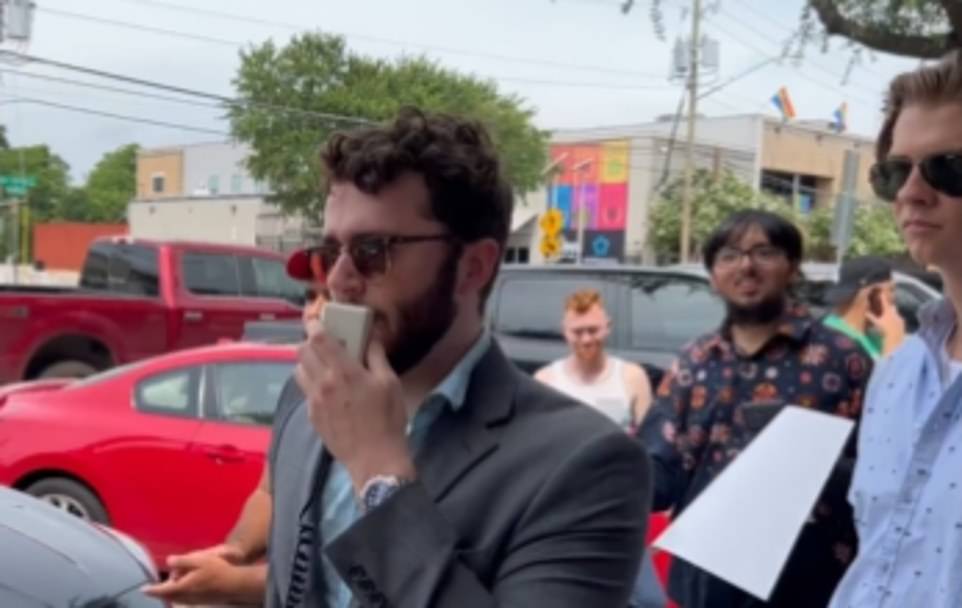 Protesters outside of Mr. Misster on Saturday. The demonstrators accused the parents in line of enabling democrats to endorse pedophilia

The controversial event comes as debates rage across the country about how gender identity and children should interact.

Photos and footage from the event showed adults sitting on stools surrounding a long narrow runway stage in the middle of the room.

As parents sipped on drinks with kids seated at their side, drag queens in dresses and glittered leotards danced along the stage, at times inviting the children to walk down the runway with them.

The drag queens snatched dollar bills from children’s outstretched hands, all beneath the glow of a pink neon sign reading ‘It’s not gonna lick itself.’ 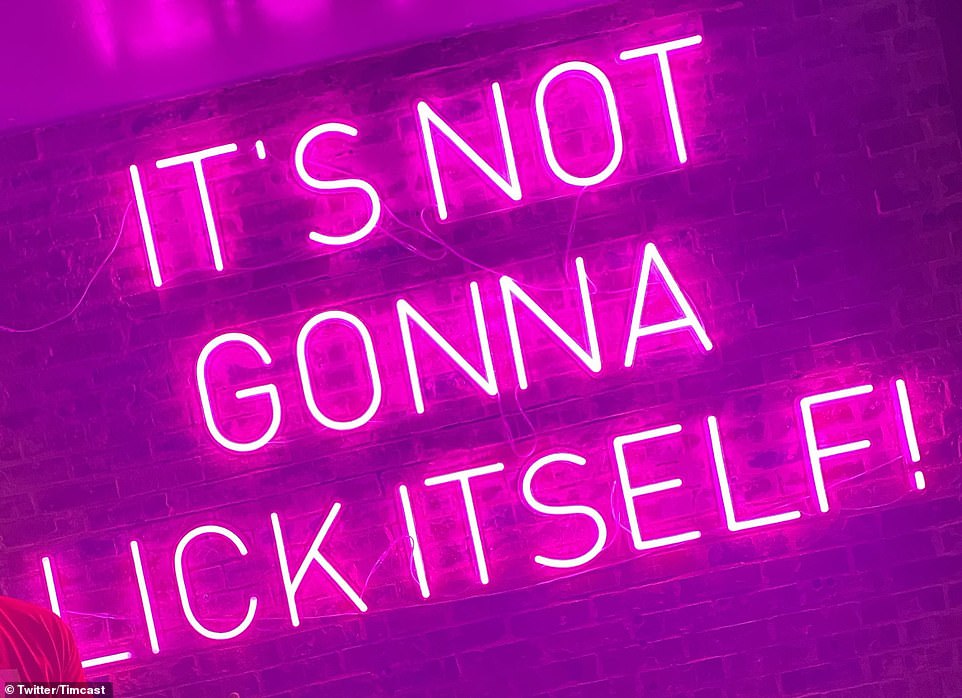 Kids danced alongside drag queens beneath this large neon sign at the event at Mr. Misster on Saturday. ‘It’s not gonna lick itself!’ the sign reads in large pink letters 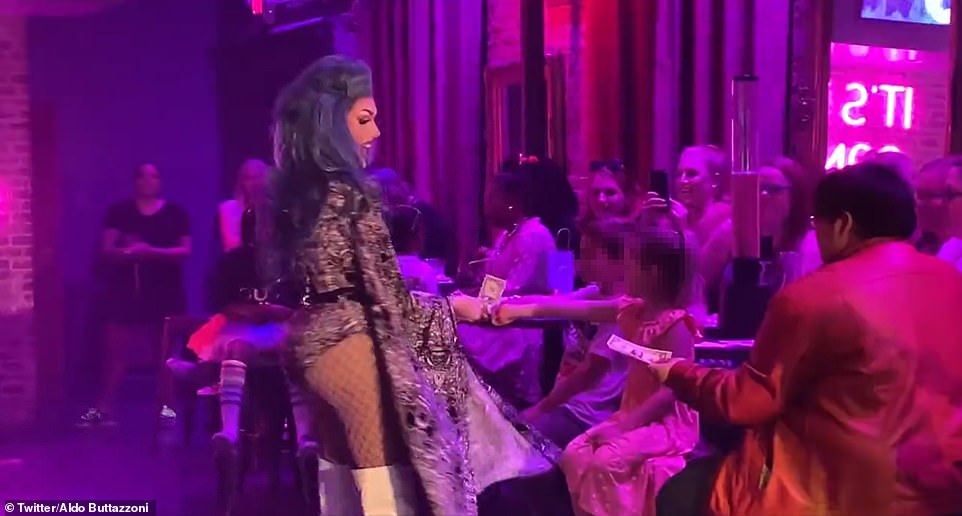 A drag queen can be seen accepting dollar bills from audience members. Children can be seen handing over cash to the performers too

A kid handing over dollar bills to drag performers at the Mr. Misster gay nightclub at a family drag show on Saturday, June 4

It continued: ‘Do you want to hit the stage with the queens? We have FIVE limited spots for young performers to take the stage solo, or with a queen of their choosing! Come hangout with the Queens and enjoy this unique pride experience, fit for guests of all ages!’

The event was met with vitriol by some, who came out in protest and called after parents in line with their children, accusing them of ‘grooming’ and endangering their kids.

‘I only have one question, why do you want to put an axe-wound in between your son’s legs?’ one protester says through a bullhorn.

A woman responds ‘We’ve got kids here, please go away.’

‘That’s the point,’ the man on the bullhorn says. 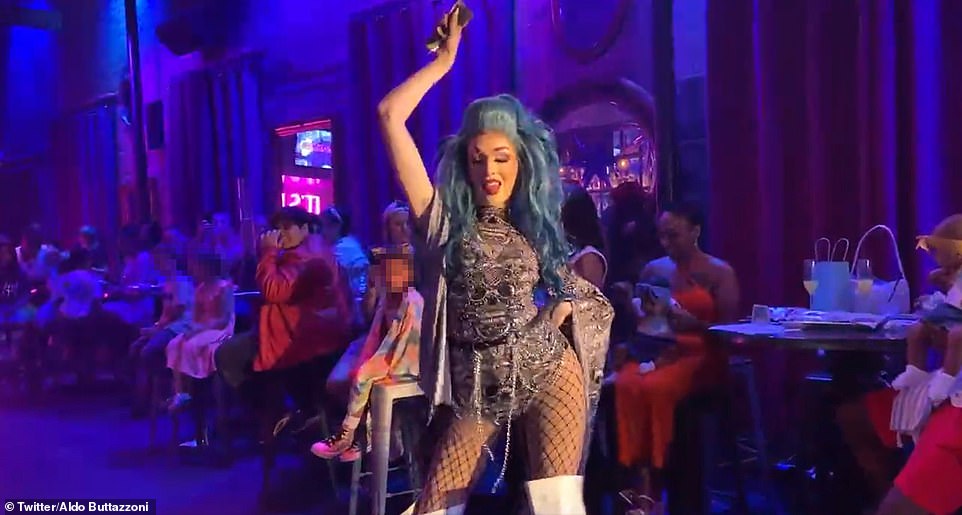 A drag queen performing at the ‘Drag Your Kids to Pride’ event at a Dallas gay night club on Saturday, June 4. Children can be seen sitting on stools lining the runway 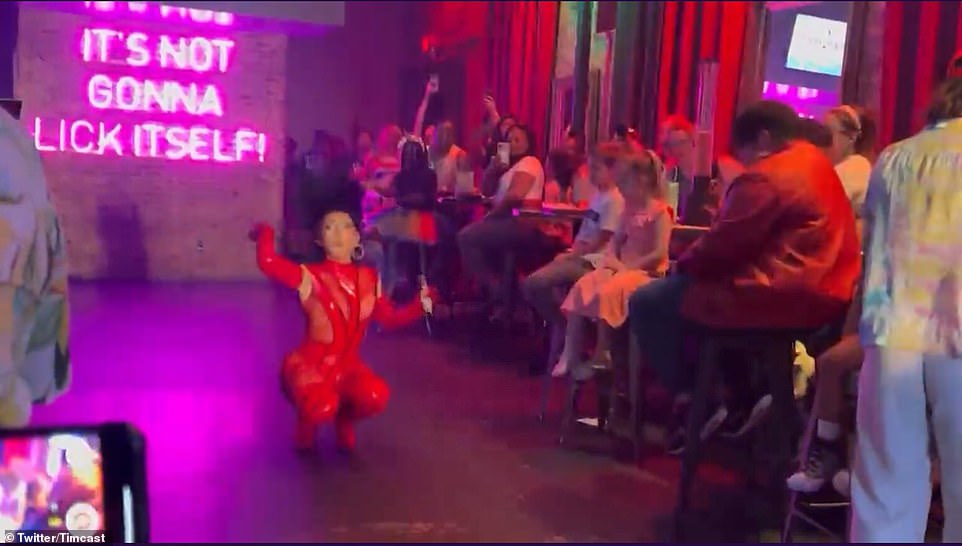 A drag queen performing at Mr. Misster on Saturday as children in the audience look on. Kids could be seen handing dollar bills to the performers 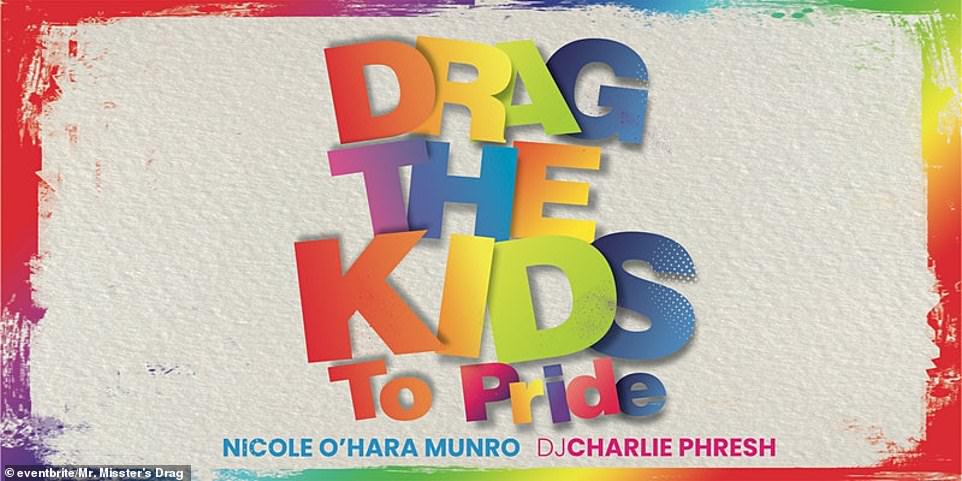 The banner for the event’s online brochure. Organizers characterized it as an opportunity for people to share joy about who they are

One woman protesting says she saw a poster for the event and was emboldened to come out and protest.

‘I live in this community,’ the woman told ABC 8, ‘I have for several years. I don’t believe that I should be seeing signs advertising for children to be dancing on stage with men in thongs and in inappropriate clothing and makeup. I do not in any way condone the behavior that these people are engaging in, but what drags me out here is it’s kids now.’

A representative for the bar however said that the event provided a safe and family friendly space to celebrate people being who they are.

A protester confronts people waiting outside of the Mr. Misster gay bar on Saturday after the ‘Drag Your Kids to Pride’ event at the nightclub. Police arrived to maintain order

Supporters of the event unfurl a pride flag in front of a protester outside of Mr. Misster. The event took place on June 4, just as pride month kicked off across the country

‘We are more than happy to open our doors to celebrate Pride in a family friendly, safe environment, separate from our normal operations of 2 p.m. – 2 a.m. on Saturdays because we believe that everyone should have a space to be able to celebrate who they are. Mr. Misster is a place where everyone is welcome to feel accepted, safe and included.’

‘We had a group of protestors outside yelling homophobic threats, transphobic remarks and vile accusations at these children and parents. It is so sad to see that in 2022, there are people that still want to protests others celebrating who they are, but our staff and wonderful officers helped keep us safe and kept the protestors at bay.’

The representative for the bar also noted that the raised money for a youth LGBTQ+ organization in the community.

Controversy around the event comes as Pride Month kicks of in the US, and as debates swirl across the country about the role of gender-identity exposure and education to children.

In March, Florida Gov. Ron DeSantis signed into a parental rights bill that bans teachers from giving classroom instruction on ‘sexual orientation’ or ‘gender identity’ in kindergarten through third grade.

In April, a Tennessee lawmaker said he would ‘burn’ banned books if he could, as books about gender identity top the lists of banned titles at schools across the country. 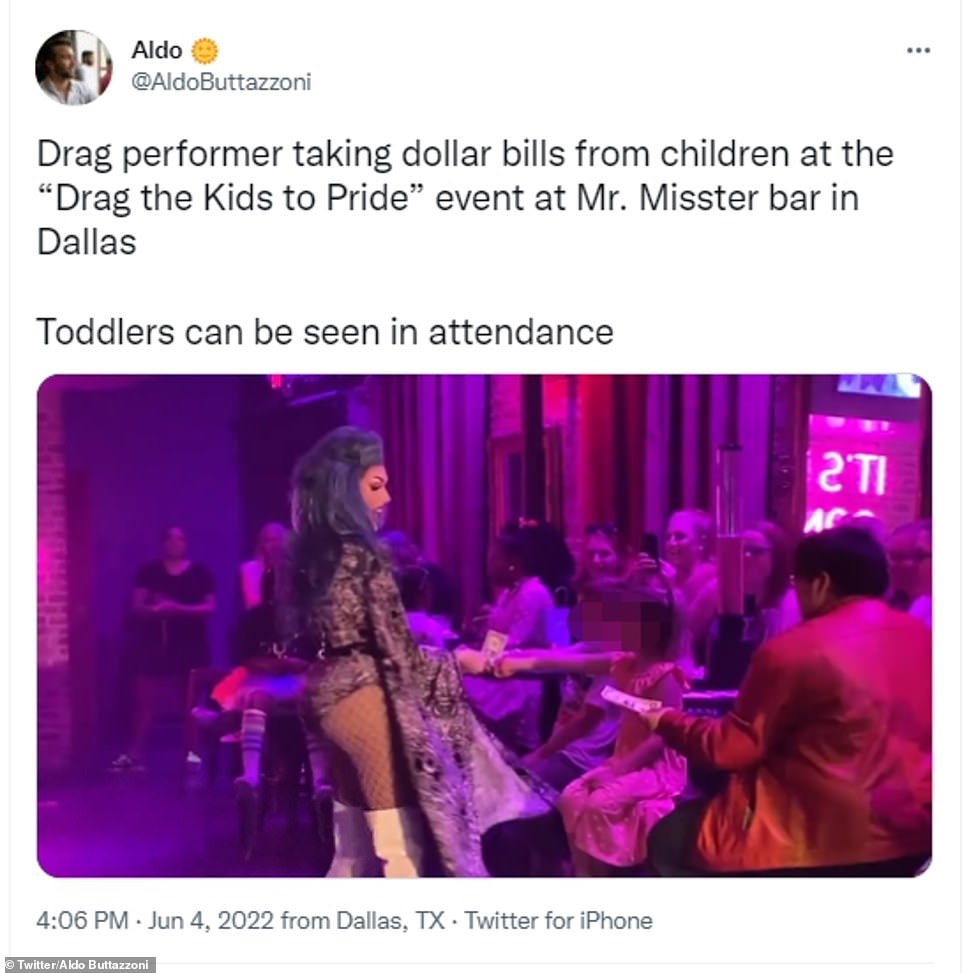 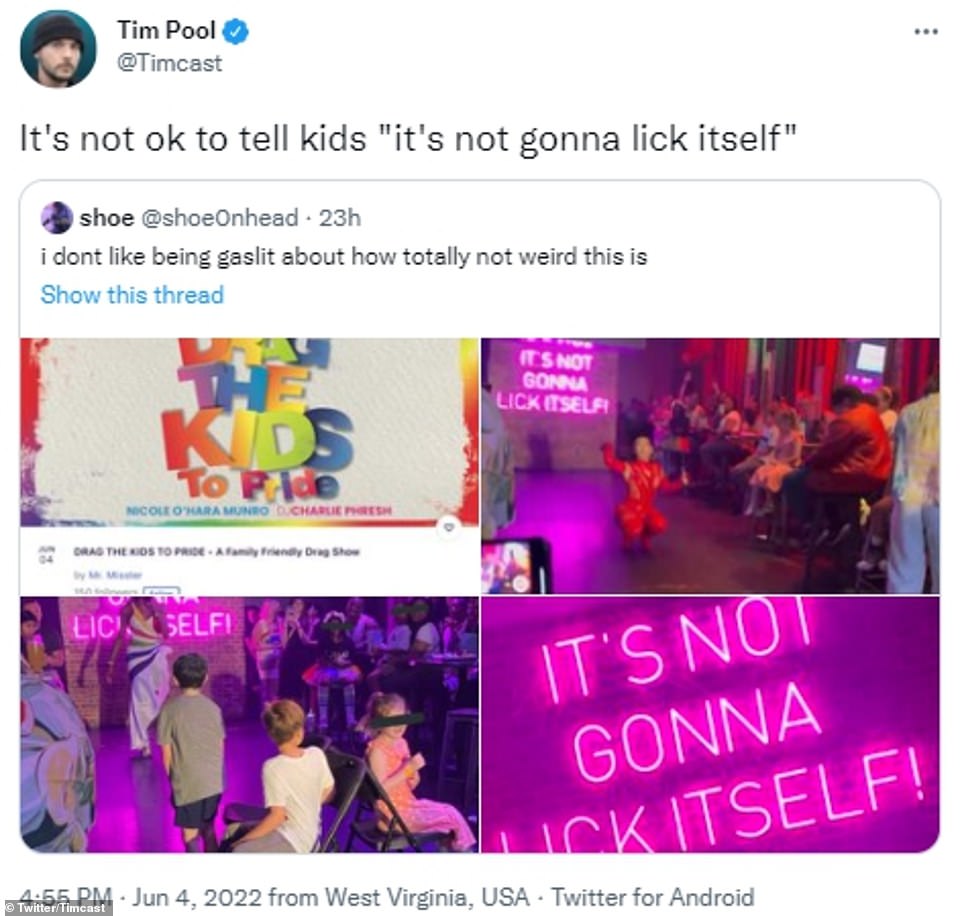 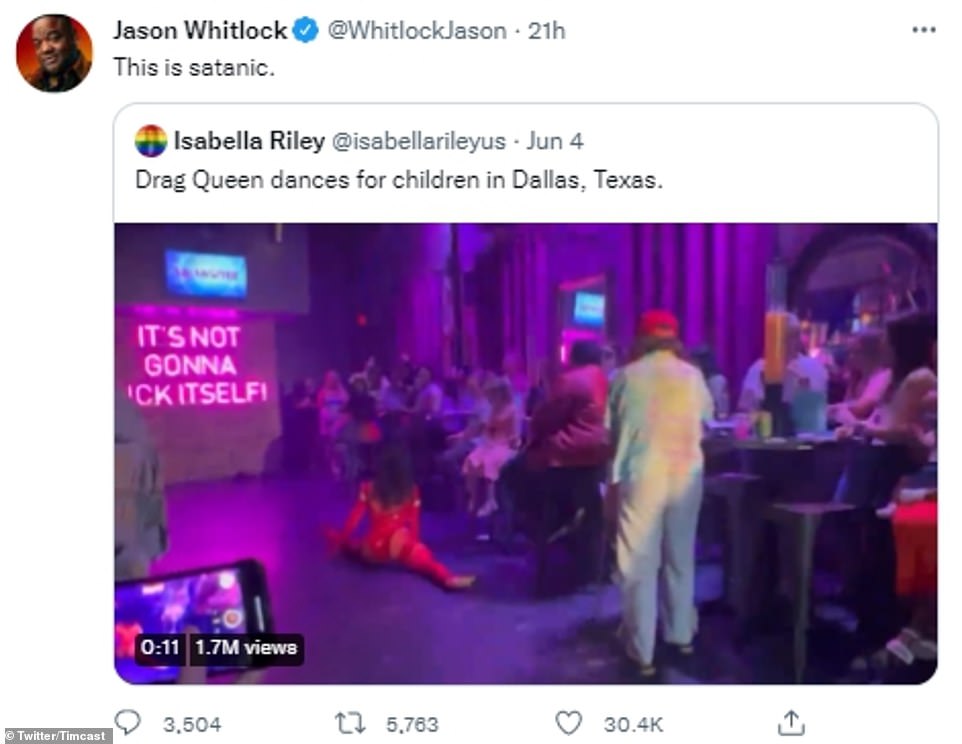 In May, a Florida mother sued her daughter’s school after teachers created a ‘transgender support plan’ for her daughter without asking for parental consent.

This month, even Pizza Hut was pulled into the debate after it promoted a children’s book that featured a little boy who dresses in drag.

And just this week, DeSantis moved to ban transition therapies for children and revoke Medicaid support for trans adults’ treatments in Florida.

‘Florida must do more to protect children from politics-based medicine,’ wrote state surgeon general Joseph Lapado, who DeSantis appointed to his post in February.

‘Otherwise, children and adolescents in our state will continue to face a substantial risk of long-term harm.’ 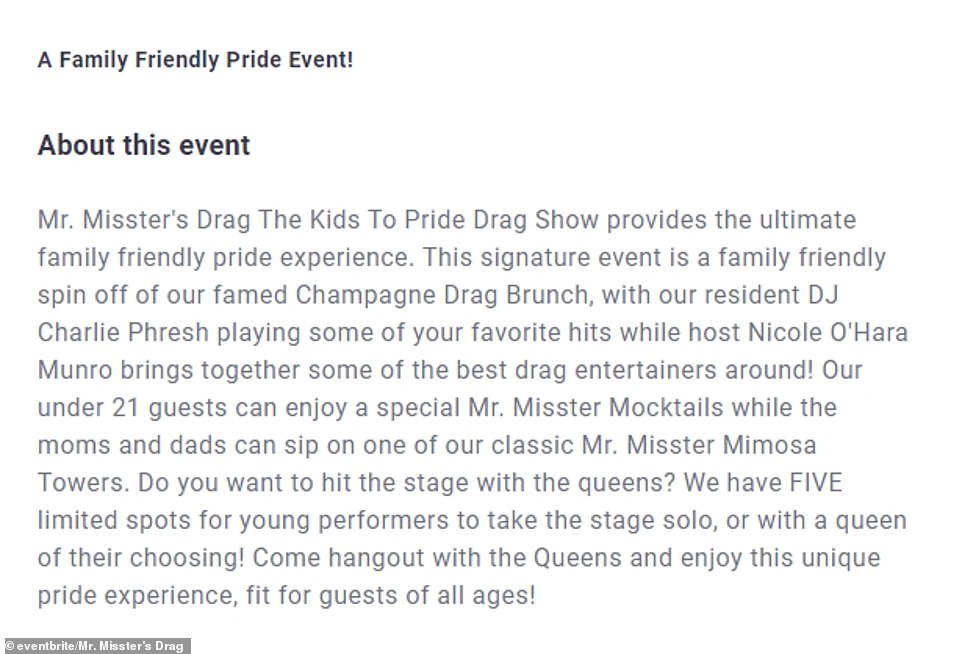