Ten thousand parking spots in Melbourne’s CBD would be turned into green spaces under a plan by RMIT researchers who say replacing asphalt with trees could bring people back to the city and kick-start its post-COVID recovery.

The research, published in the journal npj Urban Sustainability on Wednesday, found that if the City of Melbourne converted on-street parking spots into green space it would deliver enough tree canopy to cover 30 MCGs and would help protect the city from flooding and heatwaves.

Thami Croeser, of RMIT’s Centre for Urban Research, said: “There are areas that are really grey and built up, and this could be the thing to draw people back in.”

The team of RMIT-led researchers mapped parking across the city and identified 23,000 parking spaces on the street in the City of Melbourne and almost 200,000 off-street spaces for office and commercial buildings.

They found that up to half of the street parking could be moved within a 200-metre walk to vacant parking spaces.

“Even if the vacancy rate is just 20 per cent [in garages], it’s enough to absorb everything from the streets,” Croeser said.

With at least 50 per cent of parking left on the street, the RMIT modelling also ensures continued access for loading zones and disability spaces.

Croeser said the main barrier would be the probable multimillion-dollar cost of installing the green spaces and a potential backlash from business groups.

“The politics of parking are so delicate,” Croeser said. “If you talk about changing parking, sometimes the chambers of commerce can really arc up. They have blocked a lot of changes in places like Sydney Road.”

The RACV and the Victorian Chamber of Commerce and Industry were unavailable for comment. The Property Council of Australia said the proposal would need to be carefully considered by property owners to determine its feasibility. 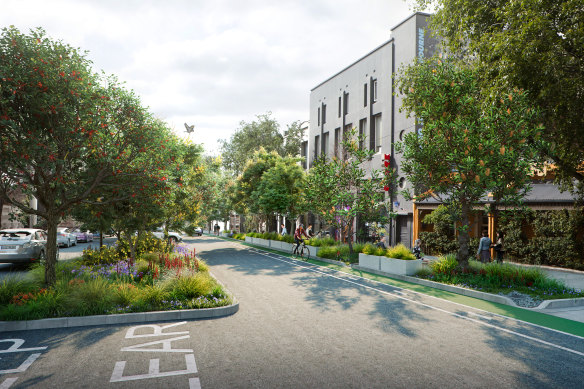 Cath Evans, the Property Council’s Victorian executive director, said transport and logistics access was already an issue for many businesses in the city, and the management of this was critical.

“It’s very important that the CBD remain accessible to all Victorians regardless of their chosen mode of transport,” she said.

“Those who have no other option than to use their vehicle need to have access to parking at an affordable price. Increasing the complexity of parking options and access would be a detrimental outcome for the many CBD businesses who have still not recovered fully from the pandemic.”

Converting the on-street car parking into greenery would deliver a third of the City of Melbourne’s ambitious target of 40 per cent tree canopy in the CBD by 2040, creating healthier ecosystems for native birds and bees.

Croeser said removing the car parks would involve ripping up an area of asphalt the equivalent to six blocks of the Hoddle grid, which would help soak up stormwater and reduce flood risk.

“It certainly would help in the Elizabeth Street catchment, which is a central catchment with extreme flood risk at the moment, and ripping up lots of asphalt is exactly what we need to do there,” he said.

He said an increase in green spaces would make the city a more pleasant place for the people who lived there and those who visited for work and entertainment.

“I really think [Lord Mayor] Sally Capp has got it right that we have to earn the commute to really draw people back to the city and the amenity is just not great in the city at the moment,” she said.

However, Croeser said the researchers wanted to change the conversation away from what would be lost by shifting parking off Melbourne’s streets.

“Yes, it will be a loss of street parking and some people will find that less convenient,” he said. “No one talks about what you get when you take away parking, and actually the positive benefits are so great.”

A spokesperson for Capp said the council “encourages visitors to plan ahead and book off-street car parks if they are driving to the city in order to save money and guarantee a spot”.