Putin says US press is unfair to paint Biden as 'frail'

Putin criticizes the ‘unfair’ US press for trying to paint Biden, 78, as frail: Russian president says Joe was in ‘great shape’ and a ‘tough negotiator’ during their summit (even though he was ‘dealing with jet lag’)

Vladimir Putin on Thursday praised the outcome of his summit with U.S. President Joe Biden, called him an astute and shrewd negotiator and criticized attempts in the press to try and characterize him as frail.

The Russian president, who hailed Biden as a highly experienced and constructive interlocutor at a news conference in Geneva, gave his backing to the U.S. leader on Thursday in a video call with graduates of a government management school.

Biden kept him on his guard with his savvy negotiating skills, Putin said.

‘He perfectly knows the matter,’ Putin said. ‘He is fully concentrated and knows what he wants to achieve. And he does it very shrewdly.’

He dismissed what he described as media attempts to cast Biden as physically frail, noting that the 78-year-old U.S. president was in great shape even though the meeting wrapped up a European tour for him that included the G-7 and NATO summits.

‘He was on a long trip, he flew in from across the ocean, involving jetlag,’ the 68-year-old Putin said, adding that he knows how tiring travel can be. 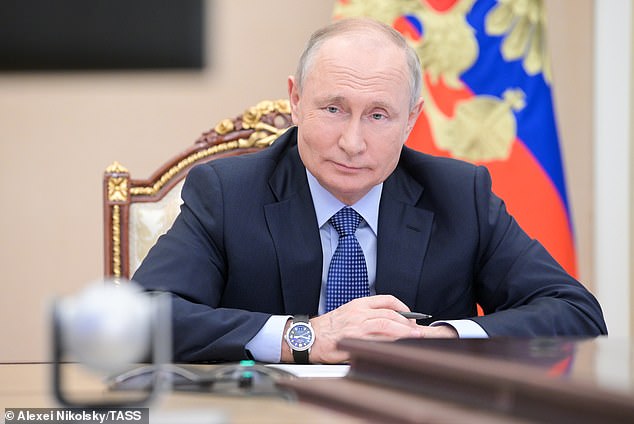 Vladimir Putin on Thursday praised the outcome of his summit with U.S. President Joe Biden, called him an astute and shrewd negotiator and criticized attempts in the press to try and characterize him as frail 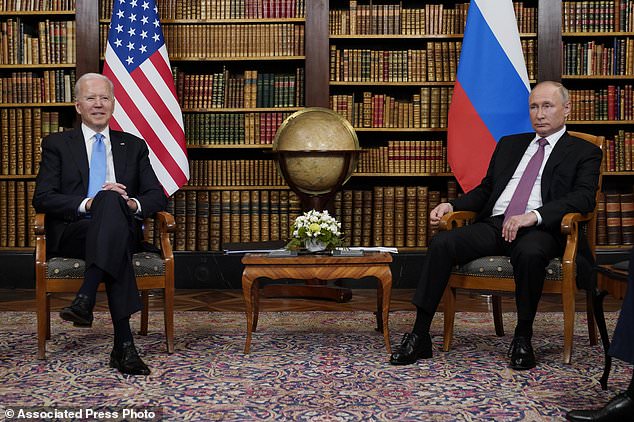 Biden noted the 78-year-old U.S. president was in great shape even though the meeting wrapped up a European tour for him that included the G-7 and NATO summits. ‘He was on a long trip, he flew in from across the ocean, involving jetlag,’ the 68-year-old Putin said, adding that he knows how tiring travel can be 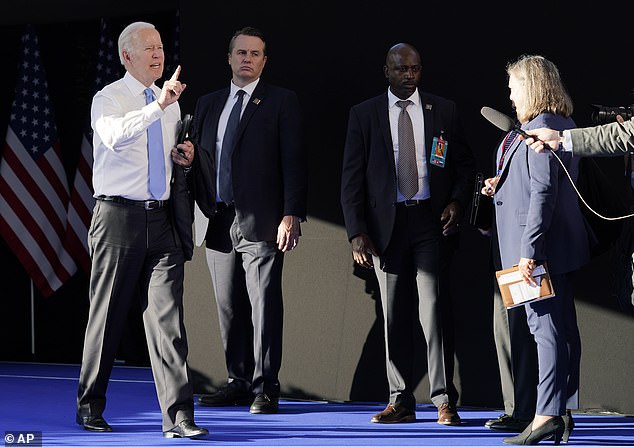 At the end of his press conference on Wednesday, Biden snapped at CNN reporter Kaitlan Collins when she asked him if he had confidence that Putin would change. He later apologized and said he was ‘being a wise guy’

‘At the same time, we established areas and points where we can possibly bring our positions closer in the future.’

The two leaders concluded three hours of talks Wednesday at an opulent villa facing Lake Geneva by exchanging expressions of mutual respect but firmly restating their starkly different views on cyberattacks, the conflict in Ukraine, political dissent and other issues.

At the same time, they announced an agreement to return each other’s ambassadors and mapped more talks on arms control and cybersecurity.

Putin particularly emphasized the importance of an agreement to conduct dialogue on cybersecurity between experts, saying it would help reduce tensions.

Biden said he and Putin agreed to have their experts work out an understanding about what types of critical infrastructure would be off-limits to cyberattacks. The agreement follows a flood of ransomware attacks against U.S. businesses and government agencies that U.S. officials said originated from Russia. 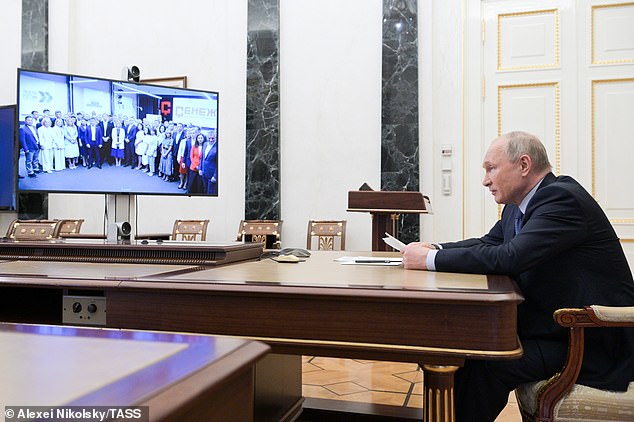 The Russian president, who hailed Biden as a highly experienced and constructive interlocutor at a news conference in Geneva, offered more praise of the U.S. leader on Thursday in a video call with graduates of a government management school

Putin, who has strongly denied any Russian state role in the cyberattacks, argued Thursday that ‘instead of finger-pointing and bickering, we should better combine efforts to fight cybercrime.’

Putin’s spokesman Dmitry Peskov described the summit as positive and productive, saying it allowed the leaders ‘to directly put forward their positions and try to understand where interaction is possible and where there can be no interaction due to categorical disagreements.’

Peskov particularly noted the joint statement from the presidents that said the two countries will conduct a dialogue on strategic stability issues and reaffirmed that ‘a nuclear war cannot be won and must never be fought’ – a principle declared by U.S. President Ronald Reagan and Soviet leader Mikhail Gorbachev at their Geneva summit in 1985. 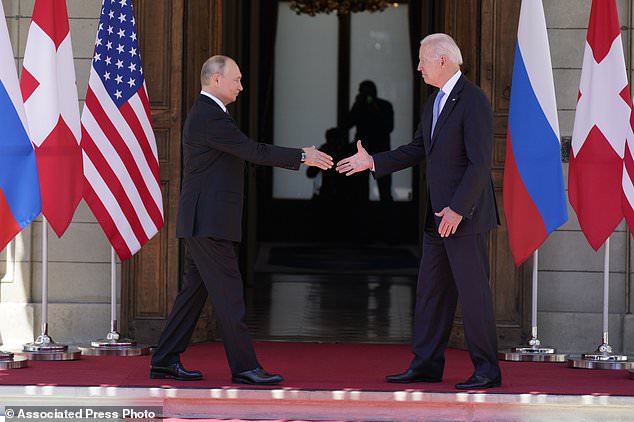 Restating the principle was a ‘significant achievement’ amid current tensions between Moscow and Washington, said Deputy Foreign Minister Sergei Ryabkov, who attended the talks.

Looking into Biden’s ‘soul’, a Tolstoy quote and comparing Capitol rioters to his opponents: The top quotes from Putin’s press conference

‘You don’t have time to open your mouth and you’re shot dead,’ he said, referring to mass shootings in the United States.

‘Look at American streets. People are getting killed there,’ he said. ‘You can get a bullet in the neck.’

‘This man knew that he was breaking the law of Russia,’ Putin said of Navalny.

‘He is somebody who has been twice, convicted, and he consciously ignored the requirements of the law,’ he said

‘There is no happiness in life, there is only a mirage on the horizon, so cherish that’

‘On the question of who is murdering whom, people rioted and went into the Congress in the U.S. with political demands and many people were declared as criminals and they are threatened with imprisonment for 20 to 25 years. And these people were immediately arrested after those events. On what grounds we don’t know, always

‘He [Biden] talked a bit about his family, what his mother told him, they are important things – maybe they are not quite relevant – but it does talk about the level of his moral values, which is very attractive and it seems to me that we did speak the same language. It certainly doesn’t imply that we must look into each other’s eyes and find a soul or swear our affection but essentially our talks were pragmatic

The strategic stability dialogue would cover a wide range of issues related to nuclear and other weapons and is key to reducing the risk of conflict between the two superpowers.

The talks follow a decision this year to extend the New START, the last remaining U.S.-Russian arms control pact and would be aimed at working out a follow-up agreement after it expires in 2026.

The negotiations will be complex and strenuous. The U.S. is worried about new destabilizing weapons developed by Russia, such as the atomic-powered, nuclear-armed Poseidon underwater drone, while Russia wants to include U.S. missile defense and potential space-based weapons in an agreement.

‘It’s a difficult task to conjugate the approaches and formulas,’ Ryabkov said. ‘But we are ready to try to solve it.’

Konstantin Kosachev, a deputy speaker of Russia’s upper house of parliament, hoped that talks between experts would help reduce the bad blood.

‘The more often experts will meet, the less room the politicians will have for speculation and manipulation,’ he told The Associated Press.

The decision to return the ambassadors, who left their posts amid the tensions, was also widely billed by Russian officials and experts as an important move to stabilize ties.

Russia recalled its ambassador, Anatoly Antonov, for consultations in March after Biden described Putin as a killer in an interview. John Sullivan, the U.S. ambassador to Moscow, flew home in April after public suggestions from Russian officials that he should leave to mirror Antonov´s departure.

U.S.-Russian ties have plummeted to all-time lows after Moscow’s 2014 annexation of Ukraine’s Crimean Peninsula, accusations of Russian interference in elections and cyberattacks, and Western criticism of the Kremlin’s crackdown on the opposition.

Biden criticized the imprisonment of Russian opposition leader Alexei Navalny and other moves by the Kremlin to stifle dissent and independent media. Putin shot back, keeping to his practice of never mentioning his chief political foe by name, saying Navalny knew he was breaking the law and was duly punished. He added that government critics designated as ‘foreign agents’ were pursuing malign Western interests.

Navalny was arrested in January upon returning from Germany, where he spent five months recovering from a nerve agent poisoning that he blames on the Kremlin – an accusation that Russian officials reject. In February, Navalny was given a 2 1/2-year prison term for violating the terms of a suspended sentence from a 2014 embezzlement conviction that he dismissed as politically motivated.

Navalny´s supporters held a protest in Geneva ahead of Putin´s visit and dotted the city with billboards blasting the Kremlin for refusing to investigate his poisoning.

On Ukraine, Russia reaffirmed its view that the country’s bid for NATO membership represents a red line, while the U.S. has restated that the alliance’s doors remain open for its membership.

Some in Ukraine voiced hope the summit could help ease tensions that spiked this year when Russia bolstered its forces near Ukraine. 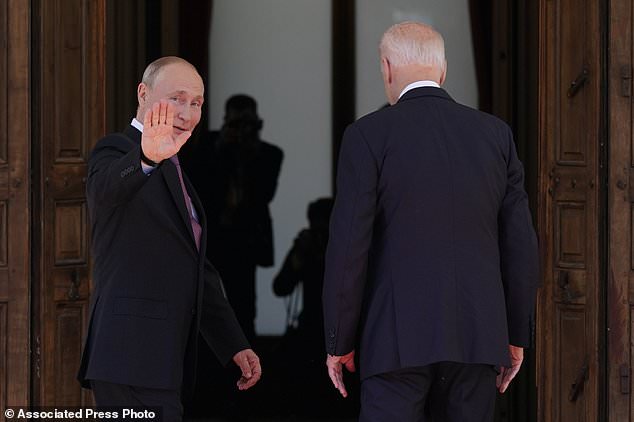 The two leaders concluded three hours of talks Wednesday at an opulent villa facing Lake Geneva by exchanging expressions of mutual respect but firmly restating their starkly different views on cyberattacks, the conflict in Ukraine, political dissent and other issues

‘Reducing the conflict potential in U.S.-Russian relations could help lower tensions on our border with Russia,’ said Volodymyr Fesenko, head of the Penta Center think tank.

But independent Kyiv-based political expert Vadim Karasev warned of a danger that the lack of resolution of the conflict with Russia-backed separatists in Ukraine´s eastern industrial heartland known as the Donbas would make it frozen, and the country would steadily drift to the fringes of international politics.

‘The results of the Putin-Biden meeting will cool Kyiv´s aspirations,’ Karasev said. ‘Ukraine won´t be able to quickly join NATO, and the conflict in Donbas will become a chronic one. The Ukrainian issue will lose its acuteness, leaving Kyiv on the periphery of the global agenda.’

Experts say that sharp differences rule out any quick progress on the divisive issues.

‘Confrontation will continue, but there is a hope now that instead of being uncontrollable it could become more orderly,’ said Valery Garbuzov, the head of the U.S. and Canada Institute, the government-funded think-tank. 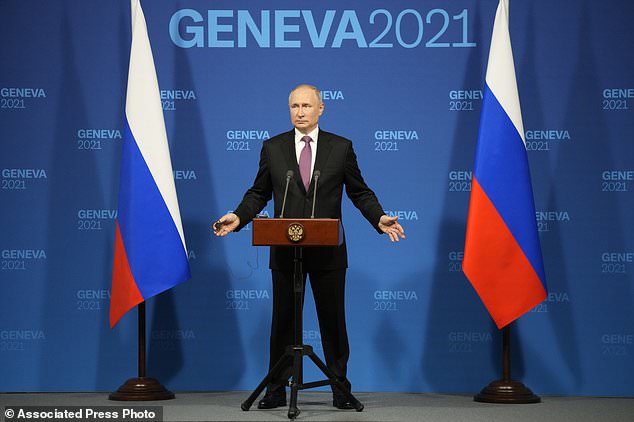 In a press conference after the summit, Putin criticized gun violence in America and compared his detaining of political opponents to the arrest of Trump supporters who stormed the Capitol