Home » World News » Putin will 'use winter as a weapon' to spark wave of refugees: NATO

Putin will ‘use winter as a weapon of war’ and spark a wave of Ukrainian refugees by targeting ‘heating, light, water and gas’, NATO warns

Vladimir Putin is using winter as a weapon against Ukraine because his army cannot beat Kyiv’s forces on the battlefield, the head of NATO has said.

Jens Stoltenberg said the Kremlin is hoping to send a fresh wave of refugees fleeing into Europe by attacking Ukraine’s ‘heating, light, water, [and] gas’.

But he vowed that members of the alliance will continue supporting the country ‘for as long as necessary’, including rebuilding its destroyed infrastructure.

Stoltenberg spoke as NATO ambassadors gathered in Romania to discuss their next support package for Ukraine and the possibility of it one-day becoming a member. 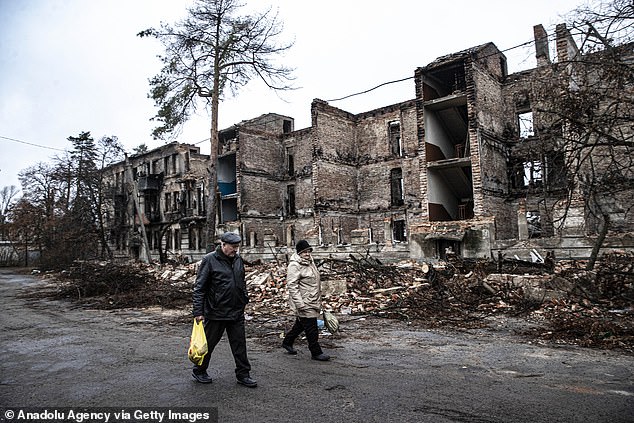 Ukrainian civilians carry supplies past a destroyed apartment building in the city of Lyman, in the east of the country, after it was liberated from Russian control 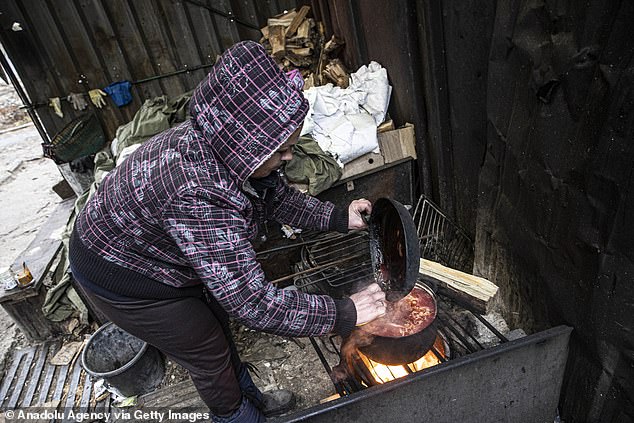 Citizens cook their meals outside over the fire due to lack of gas in the city of Lyman, in Ukraine’s eastern Donetsk region

‘NATO’s door is open,’ Stoltenberg said, adding that Russia ‘does not get a veto’ on who can apply to join the military pact.

Putin ‘will get Finland and Sweden as NATO members’ soon, he added, after both countries applied to join following the invasion of Ukraine.

Only Hungary and Turkey now need to ratify the application for the two nations – which have long-standing neutrality pacts with Russia – to be accepted.

Viktor Orban, Hungary’s leader, has signaled that his country will approve the application soon. Turkey’s Recep Erdogan is expected to follow suit soon after.

‘President Putin cannot deny sovereign nations to make their own sovereign decisions that are not a threat to Russia,’ Stoltenberg said.

‘I think what he’s afraid of is democracy and freedom, and that’s the main challenge for him.’

Never-the-less, Ukraine is unlikely to be admitted to the alliance any time soon – largely because of the war Russia is waging.

NATO’s Article 5 means that allies are treaty-bound to come to the aid of any member that is attacked, which would see them dragging into a war with Moscow.

Stoltenberg has been clear since the start of the invasion back in February that avoiding all-out conflict between the West and Russia is his main goal.

He added: ‘We are in the midst of a war and therefore we should do nothing that can undermine the unity of allies to provide military, humanitarian, financial support to Ukraine, because we must prevent President Putin from winning.

‘We are all paying a price for Russia’s war against Ukraine. But the price we pay is in money, while the price Ukrainians pay is a price paid in blood.’

Discussions are instead likely to focus on what weapons Ukraine needs to win the war, and what humanitarian support is needed to help civilians outlast the winter. 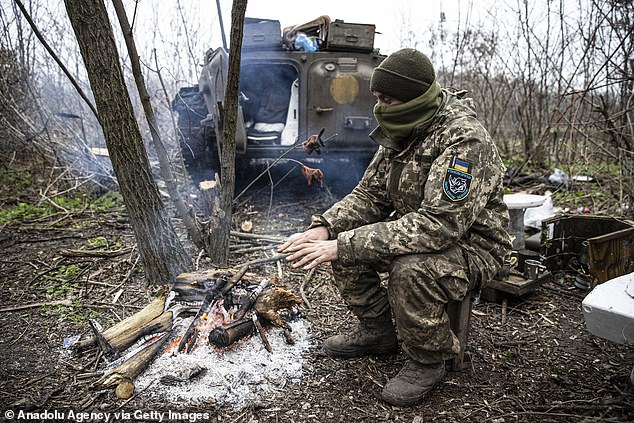 A Ukrainian soldier tries to warm up on the frontline, in Donetsk Oblast, Ukraine

NATO allies are under pressure to give Kyiv the arms it needs to conduct large-scale offensives against Russia, reclaim its captured territories, and thereby end the war on its terms rather than be forced to a stalemate and some kind of peace deal.

Gabrielius Landsbergis, the Lithuanian foreign minister, said on Twitter ahead of the talks: ‘My message to fellow foreign ministers at today’s NATO meeting is simple: Keep calm and give tanks.’

Long-range missiles capable of striking deep behind Russian lines are also likely to be on Kyiv’s shopping list, along with fast attack jets such as American F-16s or Swedish Gripen jets.

Requests for air defence systems to protect cities and civilian infrastructure such as power and water plants, which Kyiv has been making for weeks, are almost certain to be repeated.

NATO allies will also discuss military production and procurement, as their own supplies of weapons run low – limiting their capacity to aid Ukraine.

While Russia has placed much of its industry on a war footing and Putin has directed factories to bend all their efforts to supplying the army, such moves have not been mirrored in the West.

In term of humanitarian aid, diesel generators, warm clothing, food and water supplies are among the likely requests.

‘The coming months will be a big test for us all. For Ukraine it is existential, for us moral. We must continue helping Ukraine for as long as necessary,’ Slovak Foreign Minister Rastislav Kacer said. 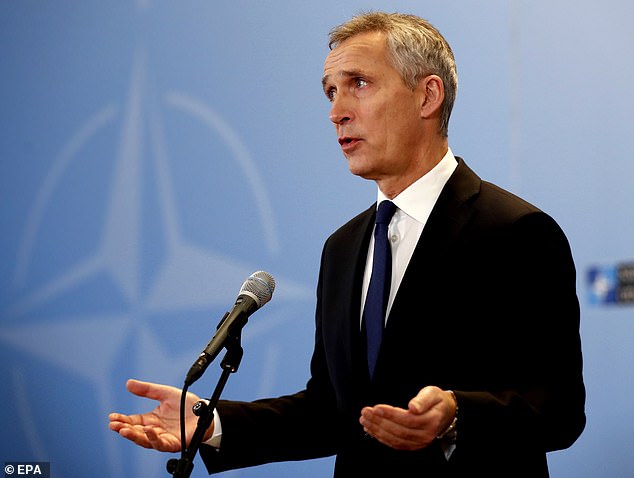 Ukrainian President Volodymyr Zelenskiy warned his fellow citizens of new Russian attacks this week that could be as bad as last week’s, the worst yet, which left millions of people with no heat, water or power.

Russia acknowledges attacking Ukrainian infrastructure, which is a war crime, but it denies its intent is to hurt civilians.

‘It is going to be a terrible winter for Ukraine, so we are working to strengthen our support for it to be resilient,’ a senior European diplomat said.

Germany, which holds the G7 presidency, also scheduled a meeting of the Group of Seven rich nations with some partners on the sidelines of the NATO talks as it presses for ways to speed up reconstructing Ukraine’s energy infrastructure.

The ministers will hold a working dinner with their Ukrainian counterpart, Dmytro Kuleba, on Tuesday evening.

On Wednesday, the ministers will also address ways to step up support for partners who officials have said are facing Russian pressure – Bosnia, Georgia, and Moldova. 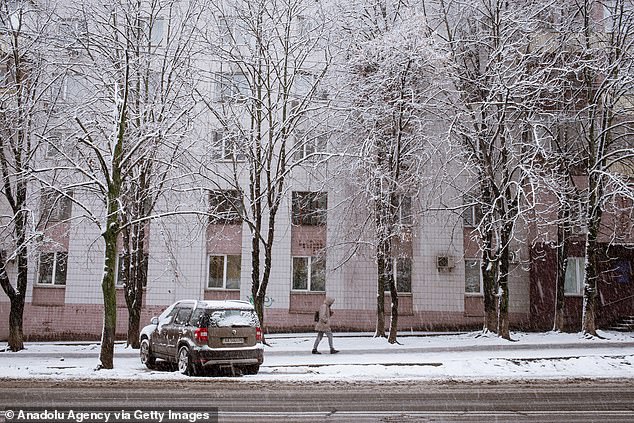 A person walks during recent snowfall in Kyiv, as winter descends on eastern Europe