The Rail Delivery Group said it has offered the RMT a pay rise of 8 per cent over two years with a guarantee of no compulsory redundancies to April 2024 in a bid to head off fresh strikes.

Rail operators’ negotiations with the RMT have just a day left to avoid rail strikes that will bring widespread disruption to travellers over the festive period. It is not at present whether the RMT will accept the group’s offer.

In order not to undermine the strike, the RMT has also imposed a ban on its members working overtime from December 18 to January 2. 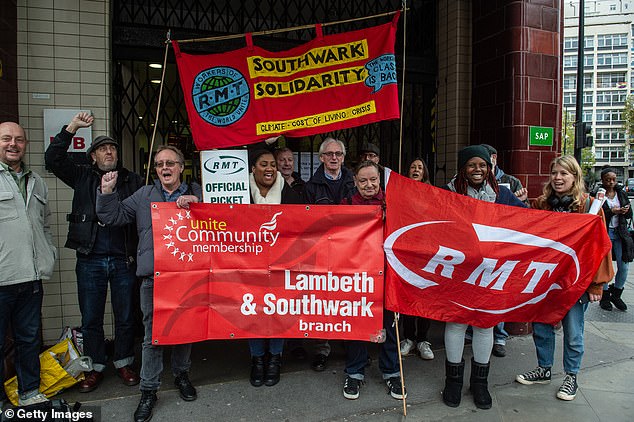 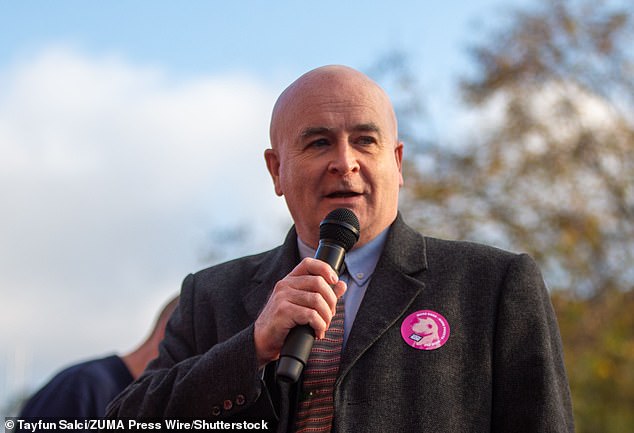 RMT boss Mick Lynch plans to lead the strike of 40,000 rail workers in a dispute over pay and conditions. Crisis talks between rail operators and the union will conclude tomorrow evening

Unless a deal is struck by Monday evening, the planned walkout looks set to go ahead.

According to the Sun, an insider with knowledge of the talks said: ‘We are approaching D-Day’.

Another added: ‘It is the last chance to call off the strikes and save Christmas.’

Britain is braced for a winter of discontent with workers from over half a dozen frontline services vowing to strike in the runup to Christmas and New Year.

Elsewhere, Currys has parted ways with Royal Mail as its courier amid fears items won’t reach customers due to strike action.

Royal Mail is locked in bitter talks with the Communication Workers Union (CWU) over conditions and pay.

The feud – taking place in the crucial runup to Christmas – has led FTSE 250 electrical retailer Curry’s to abandon its partnership with the delivery firm, The Telegraph reports. 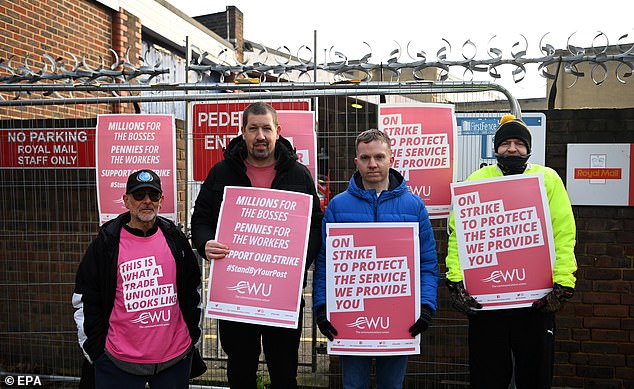 The CWU staged the first strike in December on Friday and will continue industrial action with protests on Friday, December 9, and Sunday, December 11, with further dates in the pipeline

As well as ambulance staff, nurses in the NHS are also due to hold two days of strikes this month while junior doctors are also set to be balloted on industrial action.

There is expected to be widespread disruption to transport in the run up to Christmas with further rails strikes, walk-outs by baggage handlers at Heathrow and possible action by Border Force staff.

The Fire Brigades Union meanwhile is balloting its members while industrial action is continuing at the Royal Mail.

Tory chairman Zahawi said that while he was ‘absolutely conscious’ of how difficult it was for many workers, the country simply could not afford inflation or above-inflation pay awards.

He said rising prices were being driven by higher energy costs due to Russian president Vladimir Putin’s war in Ukraine, as he appealed to unions to drop their demands.

‘This is not a time to be divided. We have to come together to, I hope, send a very clear message to Mr Putin that he can’t use energy as a weapon in this way,’ he said.

‘If you chase inflation or above-inflation pay then you will embed inflation for longer and hurt the most vulnerable. This is not a time to strike, this is a time to negotiate.

‘To ask for a 19% pay rise (for nurses) which would cost the NHS £10 billion I think is the wrong thing to do right now.

‘If you accept all the inflation-level pay rises, that is about £28 billion. It would cost every household just short of £1,000. That is unsustainable when we are trying to be fiscally disciplined.’

‘Using Russia’s war in Ukraine as a justification for a real-terms pay cut for nurses in the UK is a new low for this Government. The public does not believe this kind of rhetoric and wants ministers to address our dispute,’ she said.

‘Nursing staff cannot afford their food and other bills and still fear the worst on energy this winter. Record numbers of nurses are leaving because they feel undervalued and patients are paying the price.

‘Ten days until our strike action is due to begin, I reiterate my commitment to meeting with ministers to address our dispute.’

Unite general secretary Sharon Graham said:’Nadhim Zahawi’s allegation that Britain’s nurses, ambulance drivers and teachers are allies of Vladimir Putin is as ridiculous as it is disgraceful.

‘Rather than running down our NHS in an act of catastrophic self-harm and threatening to bring in the military, the minister should instead ask himself why health staff are leaving in droves.

‘The truth is, if pay and conditions are not dramatically improved, no army will be big enough to cover the vacancies, never mind strikes.’