‘She died in my place… I still feel responsible’: Retired police officer, 66, tells of 37 years of pain over murder of ‘best friend’ PC Yvonne Fletcher as he sues man in civil court because the ‘authorities were not going to act’

A friend of fatally shot policewoman Yvonne Fletcher emotionally described how he still suffers from ‘nightmares’ over her killing after spending years pursuing ‘justice’ for his former colleague.

She had been policing a demonstration against Colonel Muammar Gaddafi outside the Libyan embassy in St James’s Square in central London on April 17, 1984.

Mr Murray, from Chingford, east London, is bringing a civil claim for a nominal amount of £1 against Saleh Ibrahim Mabrouk, an ex-Gaddafi aide, in relation to PC Fletcher’s death.

He said he was left no other option than to launch a civil claim because ‘the authorities were not going to act’.

His barrister, Phillippa Kaufmann QC, said in written submissions that the claim for assault and battery is brought over Mr Mabrouk allegedly being part of decision making in relation to the use of armed violence against protesters in the incident 37 years ago. 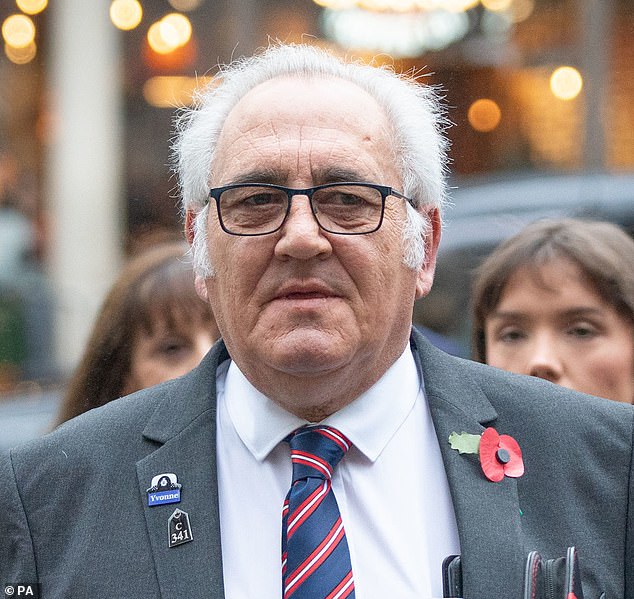 Retired police John Murray, 66, a friend of fatally shot policewoman Yvonne Fletcher emotionally described how he still suffers from ‘nightmares’ over her killing after spending years pursuing ‘justice’ for his former colleague 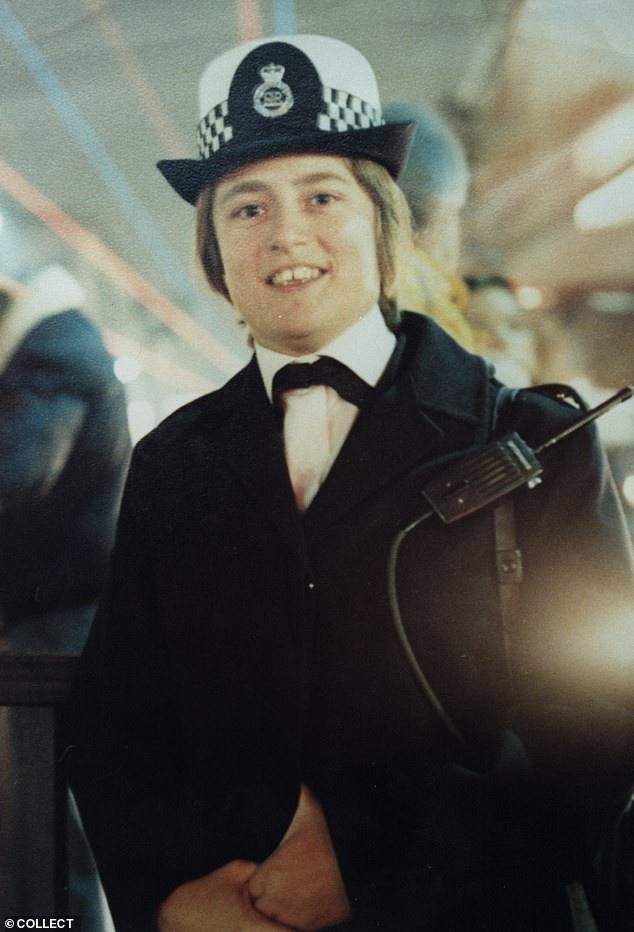 PC Fletcher, 25, was shot while policing a demonstration against Colonel Muammar Gaddafi in April 1984

Mr Mabrouk, who did not fire any shots in the incident as he had been earlier arrested, has previously denied any wrongdoing and is not taking part in the High Court proceedings.

Giving evidence at the Royal Courts of Justice in London today, Mr Murray described how he promised a dying PC Fletcher he would find out who had shot her and why.

These were the ‘last words she heard on this earth’, he told the court.

Mr Murray, who accompanied PC Fletcher in an ambulance to hospital after she was injured, later had to attend her post mortem. 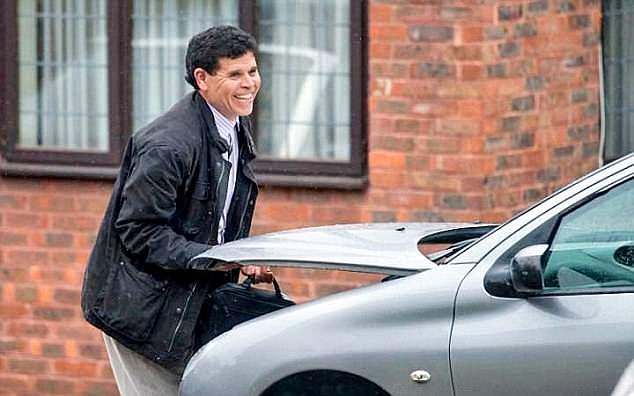 Mr Murray, from Chingford, east London, is bringing a civil claim for a nominal amount of £1 against Saleh Ibrahim Mabrouk, an ex-Gaddafi aide, in relation to PC Fletcher’s death

Describing the ‘difficult’ experience, he recalled seeing her body in the mortuary and how he felt that it was ‘too late’ to ‘help her’.

‘I wanted to do something but I couldn’t’, he said.

He told the court that he still gets bad dreams, nightmares, cold sweats and flash backs over the shooting, but was driven to seek ‘justice’ for his friend.

‘I see Yvonne nearly every day’, he said.

‘I know she’s with me here. I know that.

‘She was one of my best friends.

‘I will always think about it, it’s something I think will never go away, maybe it’s because I don’t want it to go away.

‘What happened to her should never have happened.

‘Someone must be held accountable for what happened that day.’

The court heard Mr Murray and PC Fletcher worked together on community policing in the Covent Garden area of central London for three or four years.

Mr Murray described how he and PC Fletcher were not originally meant to be at the demonstration, but were pulled off another duty that morning to replace two officers who could not attend.

He said the demonstration at the embassy ‘started off quite well behaved’, with officers talking to protesters and Mr Murray and PC Fletcher alternating positions as the morning progressed. 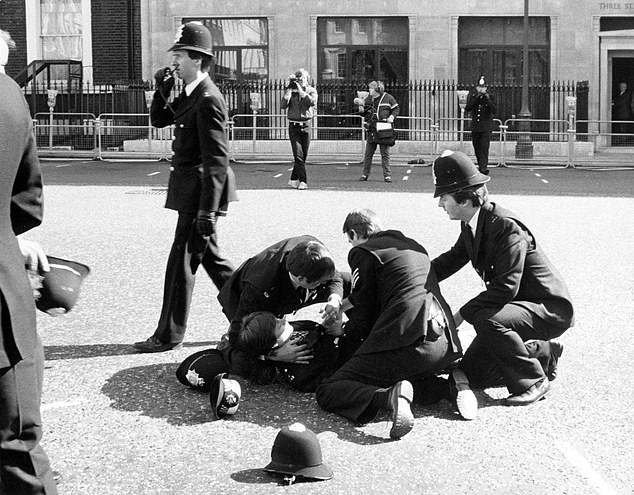 But, when his back was turned towards the embassy, he heard a ‘bang’, saw PC Fletcher fall to the ground, followed by ‘silence’.

Reading from a statement he gave in a hospital room soon after the shooting, Mr Murray described hearing a sound ‘like a fire cracker at Chinese new year’ and seeing people in the crowd diving to the ground.

He heard PC Fletcher shout out and saw her clutching her abdomen on the left side, later seeing blood ‘pumping’ out of a wound.

Mr Murray told the court that PC Fletcher’s death was followed by a ‘very, very dark period’ and how he was left ‘a wreck’.

He recalled getting the Tube home after the incident, his ‘stomach churning’ and hearing two women speaking about a police officer being shot.

‘I was feeling sick and I was very tempted to shout out to them she’s dead, but I didn’t’, he said.

He explained how he blamed himself and that he felt ‘she died in my place as far as I’m concerned’.

‘If I changed places with her once more, it would me’, he said, adding: ‘If I’d been shot I may have survived, she was shot and she died.

‘I was there really to look after her.’

In written submissions, Ms Kaufmann has detailed how evidence indicated shots were fired from an embassy window.

Witnesses allegedly saw a gun barrel and a cloud of smoke at a first-floor window of the embassy. 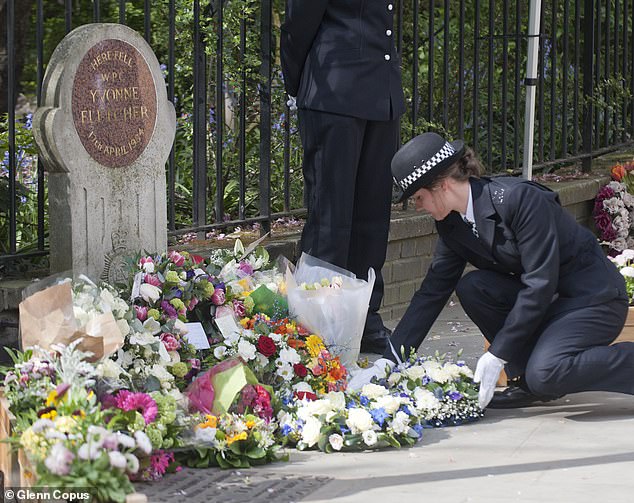 A Metropolitan policewoman lays a wreath at the spot where Yvonne Fletcher was shot, on the 30th anniversary of her death

In 2019, Mr Mabrouk was ‘excluded’ from the UK over his ‘suspected involvement in war crimes and crimes against humanity’, she said.

Ms Kaufmann said he has denied being involved ‘in any form of terrorist violence’ and he noted that Libya has previously admitted responsibility and paid compensation to PC Fletcher’s mother.