A large parcel of land beside the booming growth area of Torquay has become the latest flashpoint in a contentious planning review considering whether to allow development on the untouched site.

Public hearings will soon begin into proposed wide-ranging planning controls that will determine the future of parts of the Surf Coast and Greater Geelong. 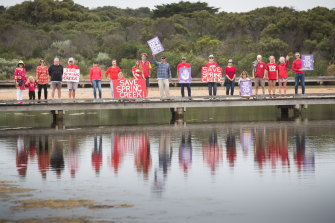 Residents of Torquay fear the Spring Creek area may be developed as the state government considers planning controls in the region. Credit:Jason South

But a proposal to allow development in the 245-hectare stretch of land known as Spring Creek has drawn the ire of residents who are demanding the region be protected from overdevelopment.

Development in Torquay has expanded rapidly in recent years and the pandemic has exacerbated those growing pains as city dwellers seek a sea change.

Parts of the Surf Coast region were declared a distinctive area and landscape in 2019, with the state government now deciding what long-term protection measures will be introduced in Torquay and Jan Juc.

The proposal is one of two options for Spring Creek set out in the document.

“Under this option, the area could be developed for residential and associated uses in a way that is sympathetic to the state-significant landscape setting, Aboriginal cultural heritage, historic heritage and environmental and biodiversity values,” it said.

The draft policy is part of a state government election promise in 2018 to give Surf Coast communities a say in determining town boundaries.

It is also examining preferred locations for long-term growth and protection of the landscape.

The state government has appointed an independent panel to consider community consultations and will make recommendations to Planning Minister Richard Wynne. 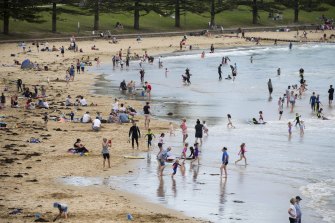 “The community is saying we’ve grown enough and it’s changing the character of Torquay and Jan Juc,” he said. “Many are saying we’re already at capacity, with traffic jams and full car parks at the beach and shops.”

The Torquay and Jan Juc area is now home to about 20,000 residents.

“Torquay has done its fair share of Victorian growth,” said Labor’s MP for South Barwon, Darren Cheeseman. “The quintessential surfing seaside village is certainly not what it was 10 years ago.”

“We promised to stop our pristine Surf Coast from turning into the Gold Coast and that’s what we’re doing through this planning process,” she said.

The government insists that even option one would not allow for high-density “urban” development.

In her submission to the review, 3228 Residents Association secretary Sue O’Shanassy said Spring Creek could be protected only if residential development was ruled out completely.

“It is not easy to explain the lived experience of driving … and seeing the green valleys and hills, seeing the kangaroos grazing and worrying what will happen to them,” she wrote.

Villawood Properties executive director Rory Costelloe said Torquay had been growing “at a rate of knots”.

He said he does not have properties in the affected areas, but maintained residents had to accept that more people wanted to enjoy the coastal lifestyle.

“A lot of the stiffest opposition comes from people who have only been there for five years. That’s a general sentiment that applies to any growth corridor anywhere.”