In appearing to realise their dream of having a private birth at home, the Duke and Duchess of Sussex have once again reminded the world that they are determined to carve their own royal path. 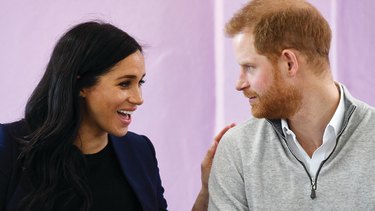 The Duchess of Sussex has given birth to a boy.Credit:ninevms

Although Buckingham Palace refused to confirm that the 7lb 3oz baby boy had been born at home at 5.26am, it is thought the royal couple's Windsor home, Frogmore Cottage, provided the setting for the momentous occasion, with speculation rife that the Duchess had a water birth with the Duke and her mother, Doria Ragland, by her side.

Far from breaking with tradition, the Duchess revived a long-standing royal practice, following in the footsteps of the Queen, who had all her four children at home – including Prince Edward, who was born at Buckingham Palace in 1964 when the Queen was 37 – the same age as the Duchess.

Described as having "sailed through" pregnancy, the Duchess is thought to have set her heart on a midwife-led birth at home, preferring a more holistic approach than the medicalised setting many American mothers-to-be are used to.

Although classed as a "geriatric mother" at over 35, friends said the Duchess would follow medical advice but if there were no complications, birthing at Frogmore Cottage would not only give the royal couple the privacy they craved, but the relaxed atmosphere – outside of the "goldfish bowl" setting of a hospital like St Mary's Paddington.

The 10-bedroom property recently underwent a £3 million ($5 million) renovation and now features a yoga studio – where it is thought a birthing pool may have been installed.

Although the Queen's surgeon gynaecologists Alan Farthing and Guy Thorpe-Beeston were understood to have been on standby, it is thought the Duchess opted for a female-led team.

Over recent years, we have grown used to the sight of royal parents posing for photographs upon leaving hospital – a moment that started with the Princess Royal at St Mary's Hospital in the late Seventies and continued with the births of Prince William, Duke of Cambridge, Prince Harry, Duke of Sussex, and the Duke and Duchess of Cambridge's three children. 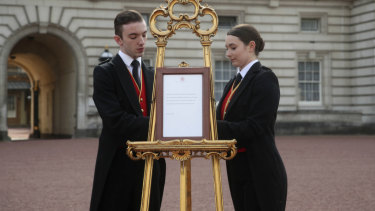 The pre-Instagram way to announce a baby. Footmen Stephen Kelly and Sarah Thompson bring out the easel at Buckingham Palace.Credit:AP

But in the absence of a Lindo Wing steps moment, it was the Duke of Sussex, 34, who decided he wanted to deliver the news to the press and public.

Now further down the royal pecking order at sixth in line to the throne, the Duke has the freedom to do things a little differently – with his wife's support.

As a former actress who has grown used to the world of celebrity, the Duchess understands the media and has, at times, sought to control her own profile and that of her husband.

When the couple launched their own Instagram feed in April following their split from Kensington Palace, attracting one million followers in a record-breaking five hours and 45 minutes – the Duke and Duchess's personal stamp was apparent from the photographs chosen to the words used – echoing some of the language the former Suits star has used in past speeches. Indeed, the informal announcement on the social media site, which simply read: "It's a boy!" appeared a break from the royal norm – although the tradition of the announcement being made on the Buckingham Palace easel was still upheld.

While keen to avoid the media circus that events like royal births can bring, the Sussexes have sought to take control of their own image in a bid to set themselves apart not only from the Cambridges but other royals, as the world's first truly transatlantic royal couple.

And while Baby Sussex may only be seventh in line to throne, he will have a global following, just like his parents.