Putin brings in helicopters and drones to spot lockdown flouters as Russia suffers 10,633 new Covid cases giving it fastest-growing rate in Europe with 134,687 infections and 1,280 deaths

Vladimir Putin will deploy helicopters and drones in Moscow to enforce the lockdown as Russia recorded a new record rise in coronavirus infections today.

Front-line medical workers have been hit hard with the Moscow mayor Sergei Sobyanin admitting around 2,000 suffering from coronavirus in the capital city.

Today it also emerged a third Russian doctor has plunged from a hospital window after complaining about medics facing intolerable coronavirus pressures.

It also emerged Russia’s National Guard will deploy helicopters and drones in Moscow to monitor compliance with the lockdown measures during holidays this week. 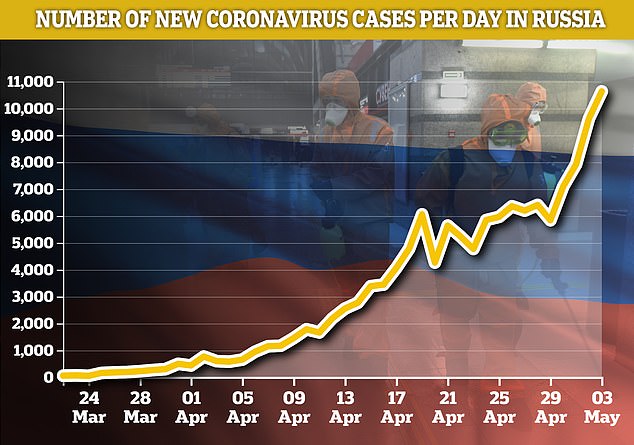 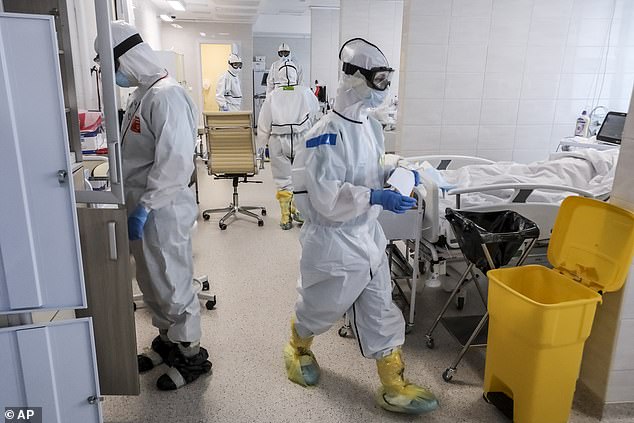 Doctors working inside the intensive care unit for people infected with coronavirus, at a hospital in Moscow, Russia, on Saturday

There is concern that warm spring weather and a string of holidays could draw people in large numbers to leave home and gather in woodland parks.

Monday and Tuesday are legal holidays and Saturday marks the 75th anniversary of the defeat of Nazi Germany, a day that usually sees huge outdoor gatherings.

Moscow has emerged as a hotspot for the virus in Russia, with the mayor earlier estimating from screening results that 2 per cent of the population has been hit – more than a quarter of a million people.

More than half of the new deaths were in Moscow – some 34.

President Vladimir Putin says the situation remains ‘very difficult’ with another 200,000-plus under medical supervision, suspected of contracting the disease in Russia. 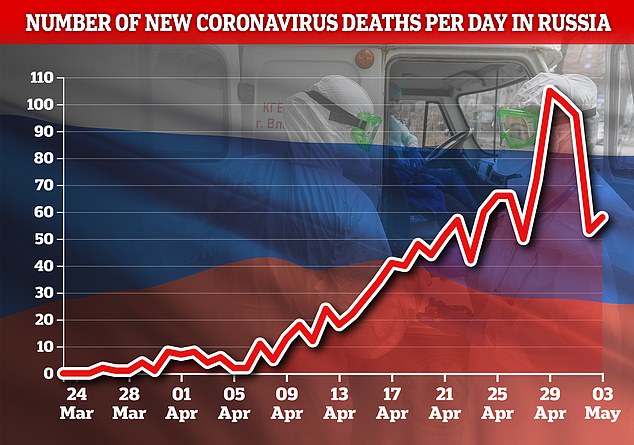 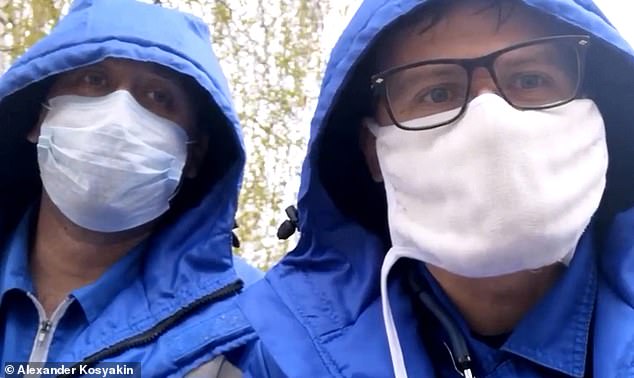 Ambulance doctor Alexander Shulepov (left), 37, and ambulance paramedic Alexander Kosyakin, (right). Shulepov is fighting for his life with head injuries after taking part in in a video which claimed he was ordered to work despite testing positive for Covid-19

The mayor – who has become a point man for the government’s fightback against coronavirus – hit back at claims that Russia is concealing the scale of infections.

‘If the authorities conceal something from them, clarify it incorrectly, or are trying to gloss something over, and people do not know the true picture, they will fail,’ he warned.

‘A lot depends on our behaviour. The behaviour of each person.

‘If people do not understand why the self-isolation regime was imposed, the reason for these measures, nothing and no extra restrictive measures will keep them in check.’

Dr Alexander Shulepov, 37, is fighting for his life with head injuries after taking part in in a video which claimed he was ordered to work despite testing positive for Covid-19. He became the third Russian doctor to fall from a window in recent weeks.

The 37-year-old and his colleagues also warned about PPE shortages in Voronezh city. Later – lying in a coronavirus hospital bed – Shulepov made a second video to retract the claims amid suspicions he was pressured to do so. 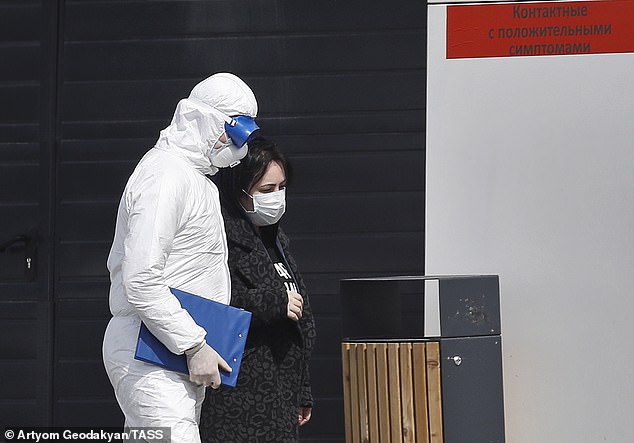 On Saturday, while being treated at Novousmanskaya district hospital, the experienced ambulance doctor plunged from a second floor window sustaining skull fractures. He is now in a grave condition.

Two senior women doctors in Russia have died recently after falling from hospital windows amid reports they had challenged their superiors over a lack of PPE for coronavirus patients.

Defence officials have admitted that the virus is spreading in the army with more than 2,900 service personnel including cadets and civilians now hit.

In Moscow, some 4,000 hotel rooms close to hospitals have been taken over for medical staff to prevent them travelling home across the city, risking a great infection spread.

An alarming hotspot has emerged as the Chayanda in Siberia gas depot where more than 3,000 workers are believed to be infected, according to regional official Olga Balabkina.

A mobile hospital is being built at the site, in Russia’s coldest region, Yakutia. Some 10,000 workers are at the site and vulnerable to infection.

More than 1,200 are infected at a another gas construction above the Arctic Circle in Murmansk region.

Gas giant Gazprom flew in 200,000 items of protection to overcome a shortage in hospitals in St Petersburg.