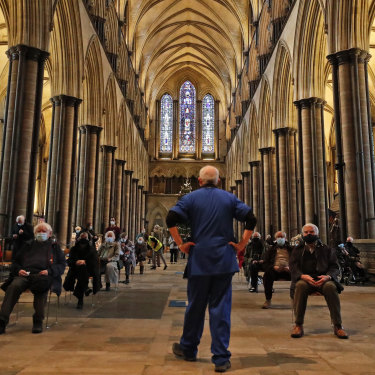 A medic monitors people who sit and wait after receiving their vaccine at Salisbury Cathedral. Credit:AP

Measured against the towering marble columns of Salisbury Cathedral – an 800-year-old architectural wonder in England’s south – the 1000 elderly locals who have been asked to gather inside look alarmingly small and vulnerable.

But after their visit they are, at least, a little more hopeful. In a rare fusion of church and clinic, the cathedral has been turned into a mass vaccination centre under Britain’s war-like effort to crush its disastrous coronavirus outbreak.

“This building has been here for eight centuries to give glory to God and serve God’s people,” says the Dean of Salisbury, Nicholas Papadopulos. “Right now, the best way we can serve God’s people is by getting jabs into their arms.” 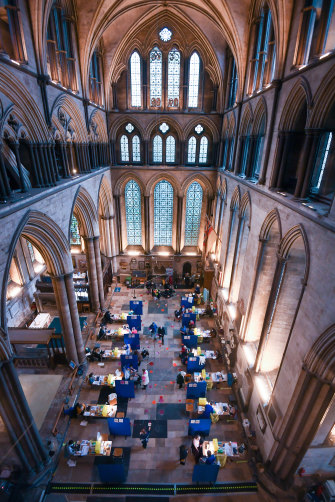 Twelve vaccination booths have been set up in the cathedral’s transept. Credit:Getty Images

Of all the town halls, stadiums, conference centres and other venues commandeered for the rollout, Salisbury Cathedral is unique. Its two organists, David Halls and John Challenger, play soothing hymns for 12 hours a day as residents aged 70 years and older shuffle in and roll up their sleeves.

“You want to get the tone right,” says Challenger, the cathedral’s assistant director of music. “We’re aiming for music which is calming, recognisable and going to put people at ease. Many of the people here are vulnerable and haven’t left their home for a long time.

“This is an amazing thing to see and it’s an absolute privilege to be part of it.”

Salisbury Cathedral boasts the UK’s tallest spire and best preserved original version of the Magna Carta but is perhaps best known for being dragged into the 2018 nerve agent attack against ex-Russian military officer-turned British spy Sergei Skripal. In a Monty Python-esque television interview, the two Russians accused of carrying out the attempted assassination – Alexander Petrov and Ruslan Boshirov – claimed they were only in Salisbury to admire the cathedral’s splendid architecture. 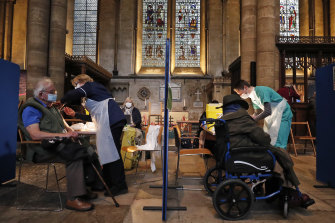 A little over two years later, pews have been replaced by a demonstration of conveyor belt-like efficiency. The Chapel of Saint Michael the Archangel has been cleared out to make room for refrigerators and trestle tables where medicos carefully prepare the vials. The magnificent Gothic cloisters are the perfect space for people to queue before entering. And in the cavernous nave, people sit and wait for 15 minutes to be monitored for any serious adverse side effects.

“I just feel very relieved,” says Lilian Jackson, 88, who with husband David, 90, was vaccinated over the weekend.

“We have been isolated for a year. We won’t rush back to normal any time soon but it is nice to know we might be a little more protected.” 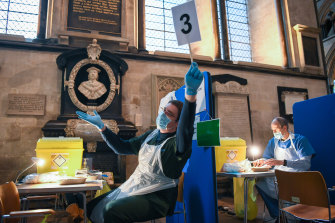 A vaccinator calls for the next patient inside the cathedral’s transept.Credit:Getty Images

Papadopulos first offered to turn over the cathedral back in December when regulators granted emergency approval for the vaccine developed by Pfizer and BioNTech.

In the nine weeks since, 6.6 million people in the United Kingdom have been given their first dose – the third highest rate per capita in the world. That’s more than one in 9 of the adult population, or 79 per cent of all people aged over 80. The medical miracle couldn’t come soon enough, though: Britain’s official death toll is expected to top 100,000 on Tuesday and the virus is still raging out of control.

“There is no shrink-wrapped, safe, clinically-tested way of being a human being,” says Papadopulos. “We are constantly exposed to danger and peril.

“Here, we proclaim a faith which is grounded in the experience of real life and in real life plagues happen, earthquakes happen and people do terrible things to one another. 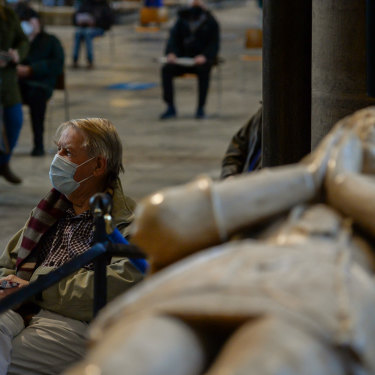 Patients wait in the cathedral’s historic nave for 15 minutes before they are allowed to leave. Credit:Getty Images

“It’s all just incredible, I’m in awe,” says 81-year-old Roger Leary, who got the jab. “It’s such a huge enterprise to vaccinate the whole country. Like others, I’ve been a bit worried about falling behind but you’ve just got to trust it.

“Thankfully, the system is working. It might not be perfect but it has never been done before and I think they have done a fantastic job so far.

“And there could not be a more suitable environment to calm people’s nerves. This is England at its best.” 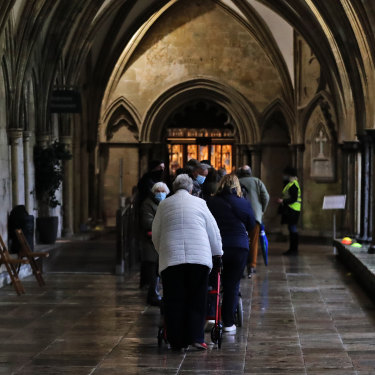 People queue for the vaccine in the cathedral’s 13th century cloisters. Credit:AP