A mother claims her teenage son has been ‘suspended’ from attending school because his hairstyle does not conform to the strict new uniform policy.

Charlotte Carruthers, 35, said her 15-year-old son Tyrelle Richards was excluded from Ellis Guildford School, in Nottingham, on September 6 after being told the shaved and plaited hair she says he has had for the last five years was too short.

Charlotte said Tyrelle, who is in year 11, was told he cannot return to the school until his hair has grown and the plaits have been taken out. 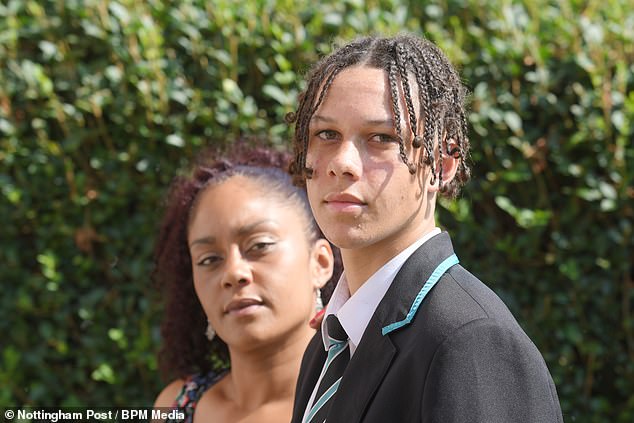 Charlotte Carruthers, 35, from Aspley, Nottingham has claimed her son, Tyrelle Richards, 15, was excluded from Ellis Guildford School in Basford, Nottingham, on September 6 as his hair was too short. The teen has his hair plaited and shaved at the sides, which the school have said is not acceptable within a new set of rules. His mum said she had been told that Tyrelle could not return to school until his hair grew or he took the plaits out.

In a phone call to Charlotte on Wednesday morning, she says the school denied it had excluded Tyrelle because of his haircut, but she claims her son had to spend a day ‘completely alone, to reflect in isolation about what he did’.

Charlotte said: ‘When I asked the teacher on the phone what was the reason for his exclusion, he just tried to fob me like nothing has ever happened.

‘I was told that after an exclusion the student has to spend a day in school, in a separate room, completely alone, to reflect in isolation about what he did.

‘After all the stress that he has been through they are asking him to do that.

‘They told me on the phone that he will have to spend a day in school from 9am to 3pm which is absolutely ridiculous.

‘When I asked them why they could not give me an answer.’

Charlotte said the episode has caused Tyrelle ‘stress and anxiety’ and she is now looking to transfer him to a new school.

She added: ‘We have applied for him to go to another school and fingers crossed that he will get in.

‘He does not want to return to this school after everything he had to go through.

‘He is too anxious to return to a school that caused him so much stress.’