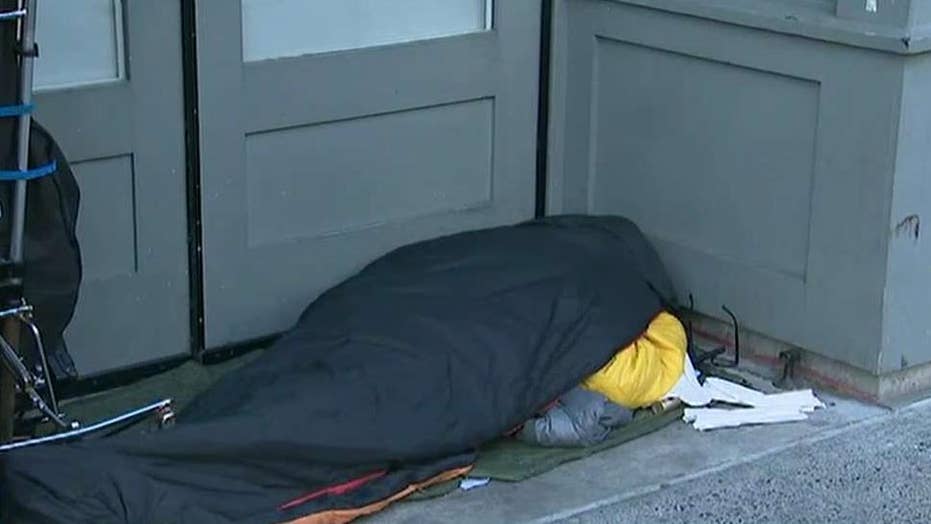 SEATTLE — Impressive job growth and high wages have people flocking to this city. The population has increased 18 percent since 2010, the most of any big U.S. city. But along with the economic surge, Seattle has experienced a dramatic rise in homelessness. The city ranks third in the U.S. with more than 12,000 homeless, trailing only New York and Los Angeles.

Leaders blame fast-rising rents, driven by a high tech building and hiring boom that is leaving the less-skilled behind. But increasingly, local residents are pointing the finger at lax or non-existent enforcement of a host of laws and routine policies.

It’s against the law to camp in public, yet the ordinance is rarely enforced. Thousands of people live in tents all over the city. Many are addicted to heroin and meth, drugs often consumed out in the open, which is against the law. But City Attorney Pete Holmes said his office will not prosecute any drug possession crime when the amount is less than a gram.

Some are now pushing back.

“As we’ve attempted to make life easier for certain categories of people, we’ve actually made life more difficult for everyone in this city,” said Chris Rufo of the Discovery Institute.

When repeat offenders are arrested, they are routinely sent back to the streets. Reports show 100 homeless people racked up 3,500 criminal charges. City Attorney Holmes declined to discuss the jail’s revolving door and increase in property crimes.

Seattle’s tolerance extends to public bus riders who get caught not paying fares. In the past, they’d be issued a citation along with a hefty fine. Now, the fine has been sharply reduced and it’s no longer a misdemeanor if the fine goes unpaid.

King County Metro found a vast majority of the fines go unpaid when the courts are involved. An examination of the data also determined the poor and people of color were most often receiving the fines and court dates. The new policy is aimed at “reducing negative inequitable outcomes.”

“The foundation of how we look at all our policies has a very strong equity and social justice perspective,” said Chris O’Claire of King County Metro.

In 2014, Seattle passed a Race and Social Justice Initiative, the first of its kind in the U.S. It requires every city department to review all of its policies and determine if they disproportionately affect racial minorities and the poor.

Seattle Public Schools realized African American and Latino students get suspended at a higher rate than white or Asian students. So, this school year the board did away with suspensions in elementary schools. The policy could be extended to higher grade levels next year.

The public library system is also getting an overhaul.  An audit found borrowers throughout the city rack up late fines at about the same rate. But users in the lower-income, more-diverse neighborhoods had their accounts blocked for not paying the fines much more frequently than those in the wealthier areas.

Mayor Jenny Durkan pushed for an elimination of fines for late returns, which has already been done at over 50 libraries nationwide. But The Seattle Public Library depends on the revenue from fines, more than $1 million per year, as part of its operating budget. So Durkan pushed through a seven-year, $213 million property tax levy proposal that would do away with late fees. Voters will decide this fall and library officials are hopeful.

Voters will also get a chance to shift the direction of the city if they don’t agree with the recent policy changes. Most of the City Council seats are up for election and several more-centrist candidates have jumped in races. Among them is Ari Hoffman, who says City Hall is just dividing residents.

“It seems the more check boxes you have in terms of which category you fit into, that makes you more important,” said Hoffman, “And that’s not equity for anybody.”