The man’s victim filmed him on her phone as she walked past the Toyota Prius parked next to a school in Brent, North West London. 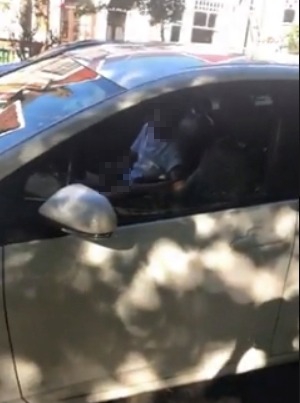 She was feeling paranoid the man was following her after he cruised slowly by, then pulled a sharp U-turn and parked in front of her.

Footage shows her striding up to the parked car, at which point the driver calls for her attention and can be seen performing a solo sex act, at 8.30am on August 1.

His car appears to have a private hire badge on it – likely making him a cabbie.

But the woman bravely called him out on his appalling behaviour, saying: “What the f**k are you doing? That is disgusting.”

The driver chucks a jumper over his exposed genitals and speeds off so fast his tyres screech.

The victim said: “I started recording him on my phone as I sensed danger.

“I was walking in the direction of his car and as soon as I got to him he said: ‘Excuse me’, and unlocked the doors.

She says he looked “terrified” when she called him out on his predatory behaviour.

“It was clearly not his first time to get his penis out and do what he did,” she added.

“I was shaken up, frozen, angry and I called the police immediately.

“He showed his genitals and did it on purpose to get my attention.” 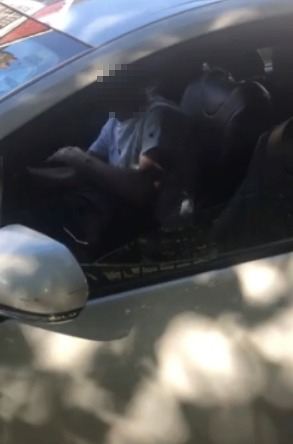 She says police told her another woman had reported a similar incident on the same road a few months earlier.

The woman described man  as slim with a short beard, and “possibly of Asian or Arab ethnicity.”

“Knowing this could happen has made me uncomfortable,” she added.

“Every other Toyota Prius I see I think, that’s the scumbag.

“It has made me feel really weird, not just for myself but for other people who could be a victim of him.

“I believe there are more people out there he could have done this too and just don’t want this to happen to anybody else.”

A private hire sticker on the back of the man’s car means he’s likely a cab driver – but officers are yet to identify who he works for.

The Met Police has launched an investigation but hasn’t made any arrests yet. 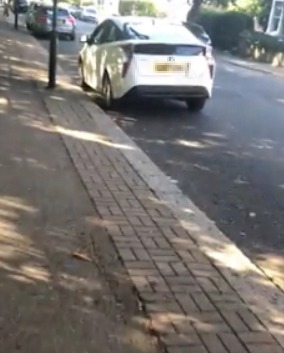