A shop in Licoln has had its alcohol licence revoked after police seized illicit alcohol found to contain 150,000 times more than the safe permitted level of industrial alcohol.

The bottles ‘unfit for human consumption’ were being sold as ‘Krackoff Vodka’ and were siezed along with a haul of illegal medicines.

Police say the products were likely ‘distributed by criminal gangs via the illegal black market.’

The Polish Zabka store in Lincoln was one of several shops raided on Portland Street as part of a major operation on December 9.

When the vodka was sent off for testing scientists found it contained 150,000 times more Industrial Alcohol than is legally permitted. 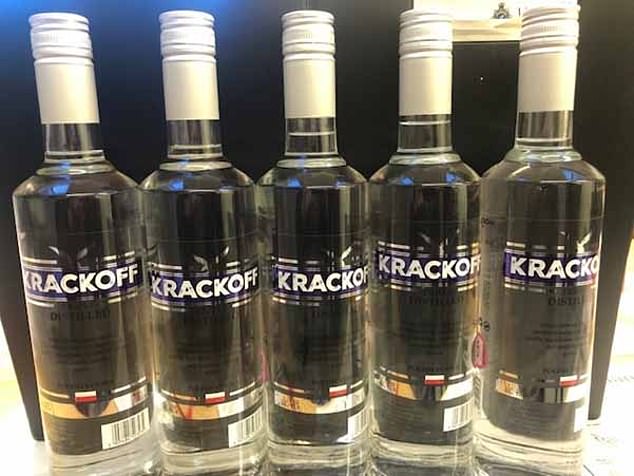 Lincolnshire Police discovered five bottles of ‘Krackoff Vodka’ at the Zabka Polish store in Lincoln during a raid. When tested, the bottles were found to contain 150,000 times the safe level of industrial alcohol

Illegal spirits are typically made from the most basic form of alcohol known as methanol.

The illegal drinks are often produced in homemade distilleries and can be packaged in legitimate-seeming bottles to be sold onto the consumer.

Consuming a methanol alcohol can be extremely dangerous with even a small amount holding the potential to blind drinkers by damaging the optic nerve.

In serious cases, drinkers can be put in a coma after imbibing the illicit substances, or they can potentially kill you.

According to the Food Standards Agency: ‘Vodka is the most commonly faked spirit.

‘We advise that if you see vodka on sale at a really cheap price, it probably isn’t vodka.’

But the store owner tried to claim the vodka was for his own personal use when confronted by Lincolnshire Police.

The force are now urging anyone who has bought a bottle of the illict vodka to report it, adding that the alcohol is ‘unfit for human consumption’.

They also announced that anyone who has bought the fake medicine should be wary of taking it as they could put people’s health at risk.

Sergeant Kim Enderby from the Alcohol Licensing Department said: ‘The fake Vodka was branded as Krackoff Vodka, and tests indicated it contained Industrial Alcohol and was unfit for human consumption.

‘If anyone sees or has bought this particular product they should contact the police or trading standards.

‘This is the first known seizure of this particular illicit brand on mainland Britain and we are working with the Food Standards Agency to trace its origins.

‘Other brands seized were genuine but paying duty on them had been avoided.

‘None of these products would have been available from a legitimate wholesaler; they are distributed by criminal gangs via the illegal black market.’

Alongside the haul of alcohol for illegal distribution were a lage number of foreign medicines unapproved by British healthcare experts.

‘Alongside the alcohol we seized, were a large amount of foreign branded medicines on sale,’ Sergeant Enderby added.

‘We seized 190 packets, some of which proved to be prescription only products in the UK and should have only been available from a pharmacy.

‘The store potentially put the health of its customers at risk, as well as gaining unfair advantage over neighbouring legitimate stores.’ 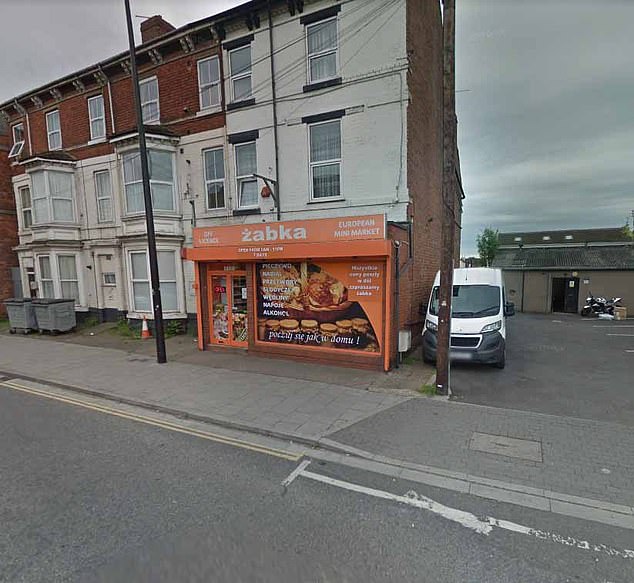 In an attempt to justify the loot, the store owner told police the alcohol was for his ‘personal use’ and that he had bought them ‘off an unknown male who came to his store’. 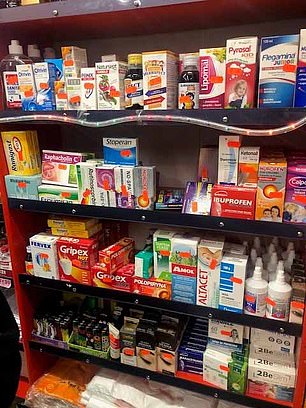 He also claimed he did not know the medicines were illegal.

The committee agreed on February 11 to revoke the shops’ licence to sell alcohol after being shows evidence of the police’s illicit haul.

Sergeant Enderby added: ‘The revocation of this Premises Licence sends a strong message from Lincoln City Council, that this sort of activity at licensed stores will not be tolerated.

‘We remain committed to the disruption, investigation and prosecution of all criminal behaviour being conducted on our Licensed Premises.’