“To SERT: female down, female down,” PolAir helicoper pilots can be heard saying to officers on the ground in an audio recording.

As tactical police moved in on three people they feared were heavily armed, the pilots observed that there was continual firing “every five seconds”. 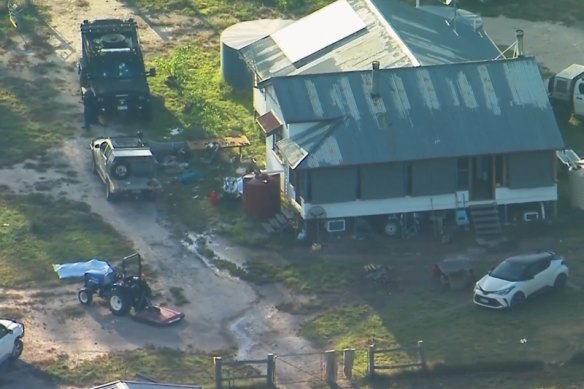 Tactical police moved in on the property under the watchful eye of two police helicopters.Credit:Nine News

At Wieambilla on Monday night, when a neighbour and two police officers were gunned down during a welfare check, two police helicopters formed a vital part of the official response.

The armoured police vehicle, a BearCat, eventually provided support on the ground.

The last movements of Nathaniel, Gareth and Stacey Train have been revealed in audio from the night.

“Both male, both armed and both discharging rounds towards white side,” a PolAir pilot told SERT (Special Emergency Response Team) on the ground.

(“White side” and “black side” are terms used by PolAir crew as location references for the SERT officers on the ground.)

“Both males are down beside the couch and still with weapons pointing white side.

PolAir pilots referred to one of the Train brothers as person of interest (POI) one, as he moved to the back of a ute, and then moved again to the driver’s door with a rifle.

“Both POIs now, weapons are facing white side and as you can see there, they’ve got the spotlight on top of the utility and discharging weapons white side.

“Single male discharging his weapon, so main POI discharging the weapon has moved to the rear of the utility, the second male is sitting on the stairs on the red side stairs.”

In the edited audio, PolAir pilots then said the main POI was obtaining rounds and loading weapons from the rear of the ute.

At one stage, PolAir 2 interrupted PolAir 1, saying “a number of shots going off there, continually every five seconds”.

The chaos continued to unfold, with PolAir relaying where the weapons were and that one of the brothers was sitting on the stairs.

“Polair to SERT, we’re happy that we’ve seen a pair of legs on the red side balcony so assume that’s the POI female.”

Then, PolAir said the second POI appeared to be on his back.

“Two dogs coming white side, coming to you white side … there’s still movement from number 2 on the couch.

“Shots fired from number 2 towards white side.

PolAir then said the second brother was on the ground, moving beside the vehicle, before standing up.

“Number 2 is down. Still has movement. Dropping to the ground.

“Still have movement of number 2. Down on the ground, laying on his left-hand side, behind the couch, facing the vehicle.

The audio will form part of the police and coronial investigation into the deaths of two police officers, Constable Rachel McCrow, 29, and Constable Matthew Arnold, 26, who were shot alongside a neighbour, Alan Dare, 58, after he rushed to help.

Dare’s wife, Kerry, has since said police left her husband to die on Wains Road, as the tactical response went late into Monday night.

So far more than $65,000 has been raised to help cover the cost of Dare’s funeral.