Hong Kong: Police and protesters have once again clashed in the streets of Hong Kong on Sunday afternoon, six months after unrest over the extradition bill began.

Hundreds of student protesters crouched behind barricades on the street outside Hong Kong's Polytech University, from where they threw petrol bombs at police. Other students positioned on the rooftop used catapults to fire petrol bombs down on to the road at heavily armoured police vehicles. 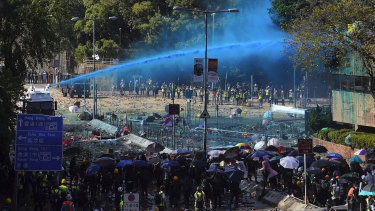 Police spray blue-dyed liquid from an armored vehicle during a confrontation with protesters at Hong Kong Polytechnic University.Credit:AP

Police responded by spraying tear gas and blue dye from a water cannon and, for the first time, a sound cannon was also deployed against protesters.

A police media liaison officer was hit in the calf with an arrow next to the Kowloon Rosary Church, 30 metres from the university, around 2pm.

Polytechnic University is across the road from the Chinese People's Liberation Army barracks, where soldiers observed proceedings through binoculars.

Thousands of students have been barricaded inside the campus since Wednesday, where they have stockpiled petrol bombs. They have bombed the toll booths of the Cross-Harbour Tunnel on the other side of the campus, blocking a major road for days. 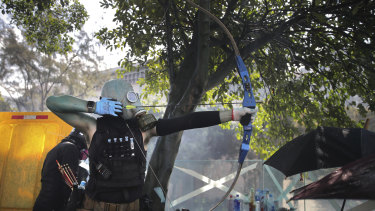 A protester prepares to fire a bow and arrow during a confrontation with police at Hong Kong Polytechnic University.Credit:AP

Polytechnic's president Teng Jin-Guang sent an email to all students on Friday asking them to leave the campus, which he said had been overtaken by activists who had "severely and extensively vandalised" facilities.

The vice-chancellor Zhang Xiang sent an email to staff and students saying police had entered the campus, despite an agreement with the university that they wouldn’t enter the main campus without a search warrant.