Spanish voters have headed to the polls for the fourth time in as many years today amid heightened tensions over the Catalonian separatist movement and a spike in support for the far-right party Vox.

The repeat voting was called by Prime Minister Pedro Sanchez after he failed to secure sufficient support from other parties to form a government, following an inconclusive general election in April which saw his socialist party, PSOE, win the most votes but fail to obtain a crucial working majority.

Opinion polls suggest that this new election will fail to break the deadlock, with neither the left or the right able to gain enough votes to gain a majority in Madrid’s 350-seat parliament.

The Socialists are on track to finish top again but with slightly fewer seats than the 123 they picked up in April, and far short of the 176 seats needed for a majority, while the main opposition conservative Popular Party (PP) may strengthen its parliamentary presence. 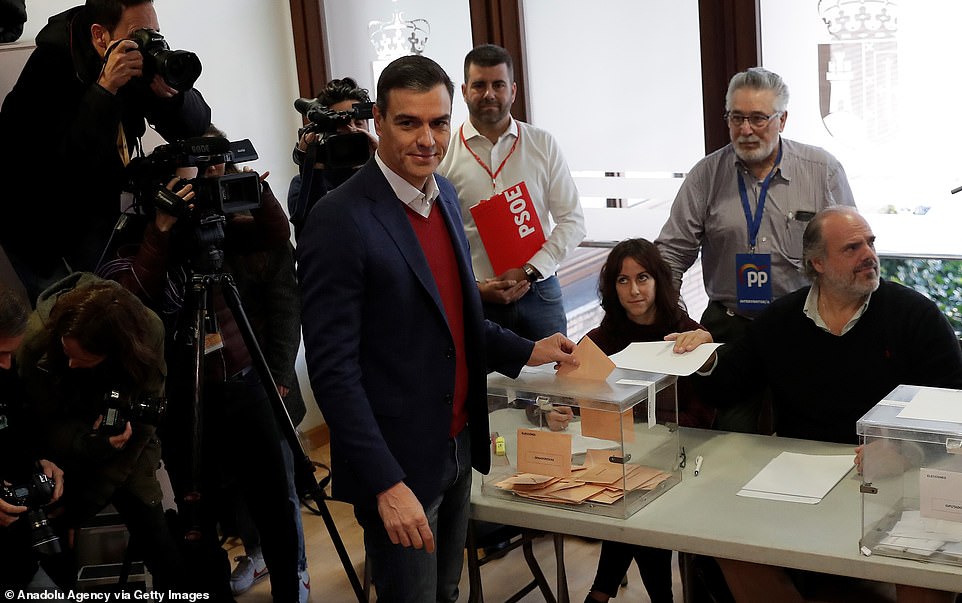 Spain’s socialist Prime Minister Pedro Sanchez casts his vote in Madrid this morning. He called the fourth general election in as many years after his party failed to get enough seats in parliament to gain a working majority 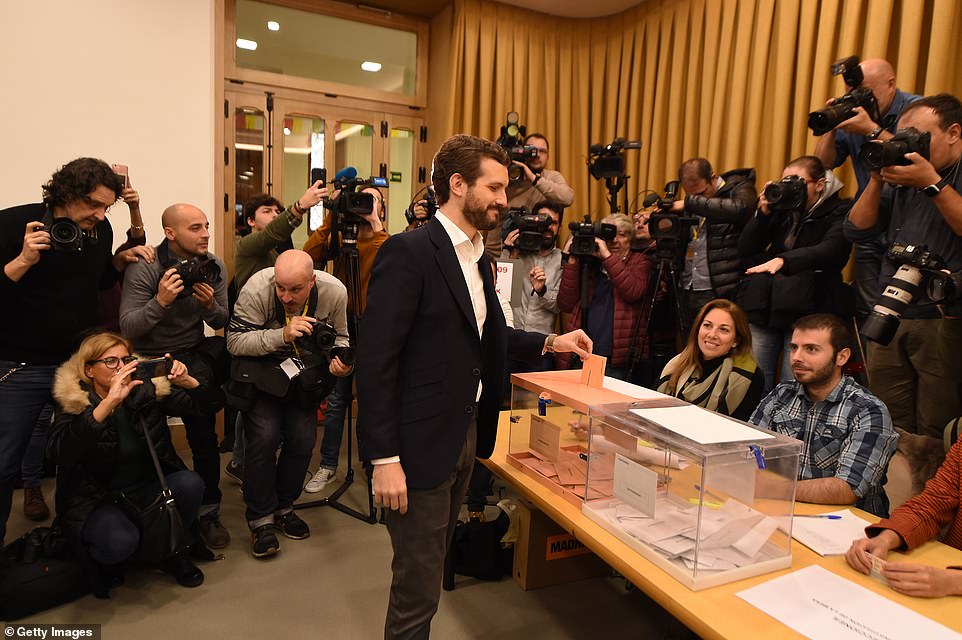 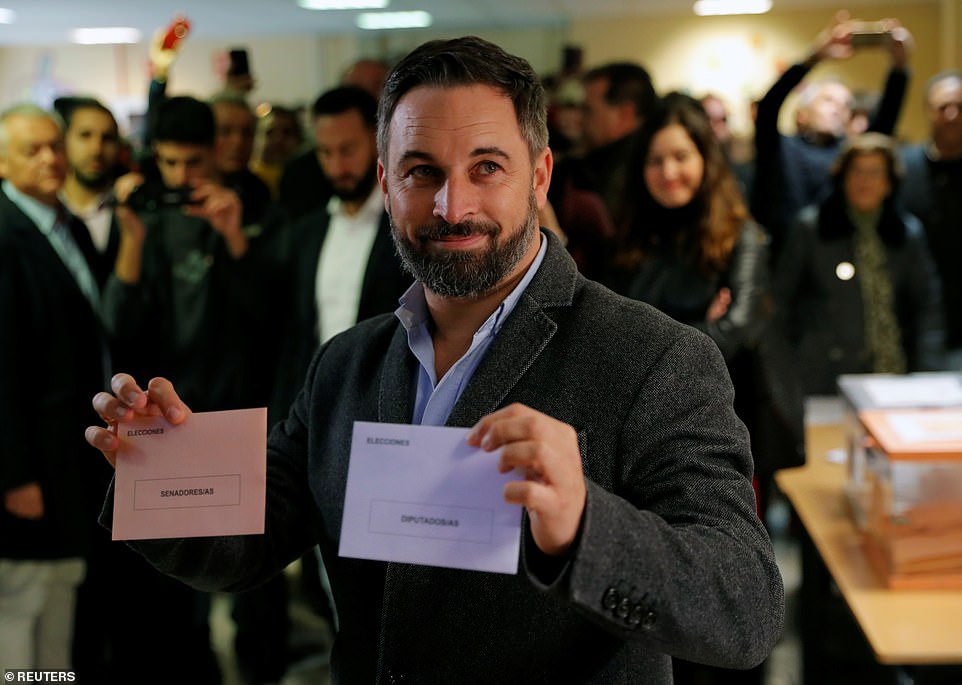 And far-right leader of Vox Santiago Abascal pictured casting his vote in the country’s capital. The party, which favours ‘drastic solutions’ to the Catalonian independence question has seen a surge in the polls 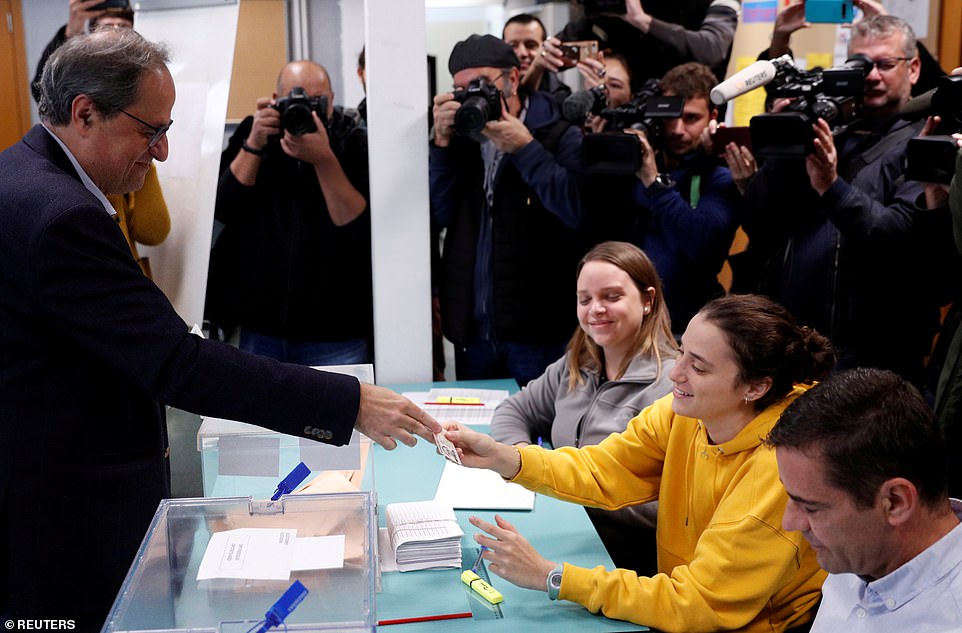 In Barcelona, Spain’s Catalan leader Quim Torra casts his vote as daughter Helena Torra, wearing yellow, works at the polling station. This election has been marred by heightened tensions over Catalonian independence and a surge in support for Vox

But the most striking development could be the rise of the far-right Vox party, which could even jump to third-largest in parliament, according to polling.

After casting his ballot in Madrid, Sanchez urged Spaniards to head to the polls, saying ‘it is very important that we all participate to strengthen our democracy’ and that the country ‘have the needed stability to be able to form a government’.

The last election produced a near-record 76 percent turnout, which helped Sanchez who had mobilised left-leaning voters to oppose Vox but analysts warn the numbers will likely drop this time, as Spaniards suffer election fatigue.

Voting stations will close at 8pm in Spain, 9pm UK time, with the results expected a few hours later.

The election comes as Spain finds itself increasingly polarised by the Catalan crisis, which has deepened in recent weeks. 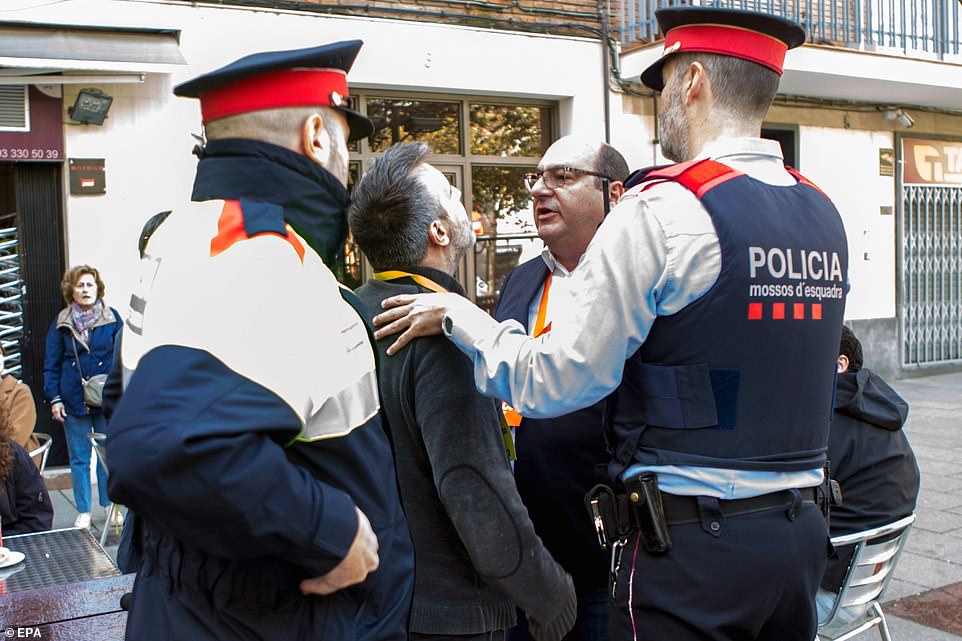 Temperatures have also run high on the election day. A Ciudadanos observer and a pro-independence JxCat party observer argue after a Ciudadanos spokesman Ines Arrimadas cast her vote at a polling station in Barcelona 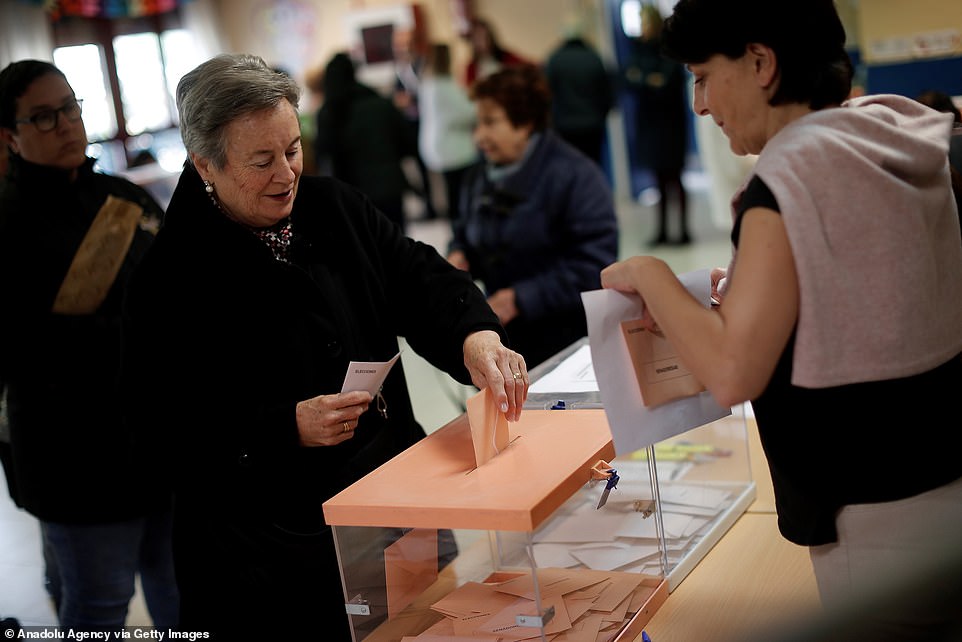 A woman casts her vote in Madrid, Spain, today. The polls close at 8pm tonight, 9pm GMT, with results expected to be announced within the next few hours afterwards 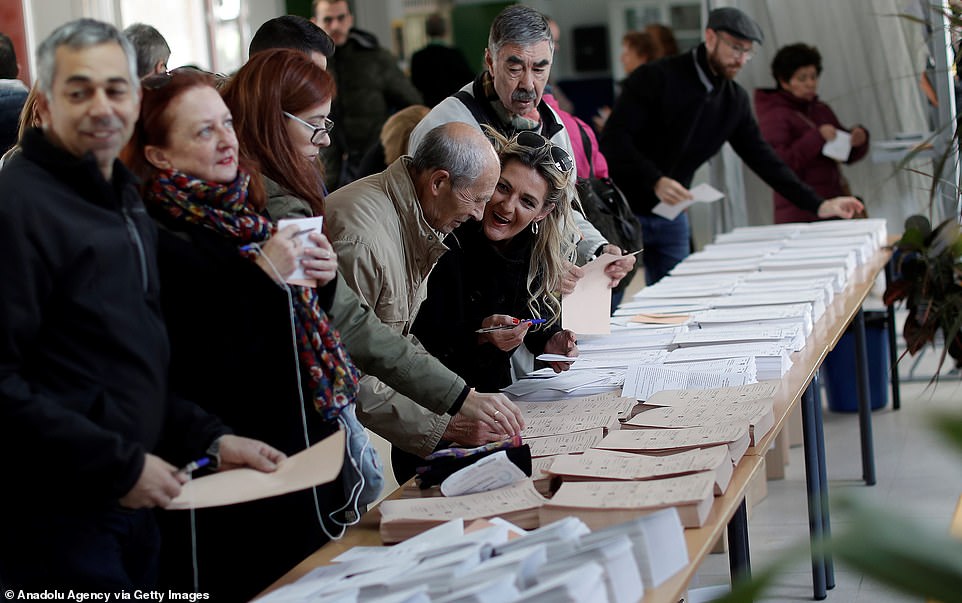 Spanish citizens cast their votes in Madrid, Spain, today. The last election had a record turnout of 76 per cent, but the turnout for this election is expected to be lower as voters suffer from fatigue 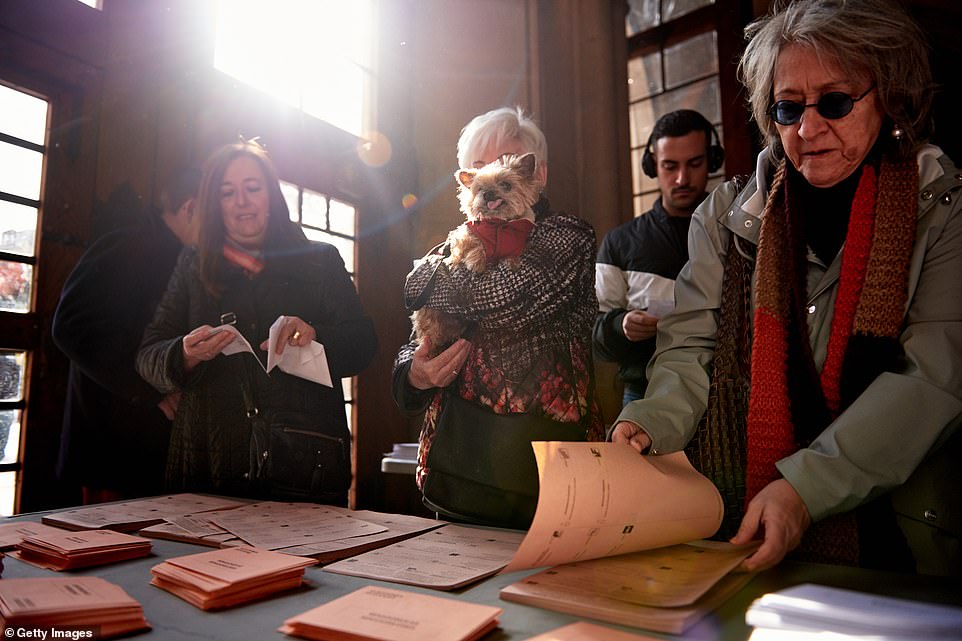 Voters in Barcelona, Catalonia, arrive to cast their votes in Spain’s general election. One is holding a dog

Less than a month ago, the Supreme Court sentenced nine Catalan separatist leaders to lengthy jail terms over their role in a failed 2017 independence bid, sparking days of angry street protests in Barcelona and other Catalan cities that sometimes turned violent.

More than 600 people were injured in the protests, which saw demonstrators torching barricades and throwing stones and Molotov cocktails at police.

During a TV election debate conservative PP leader Pablo Casado called for a ‘real government that will put order in Catalonia’.

But the toughest line against the Catalan separatists has come from Vox leader Santiago Abascal.

‘Drastic solutions are needed,’ he said during his final campaign rally on Friday night in Madrid.

He repeated his pledge to end the Catalan crisis by suspending Catalonia’s regional autonomy, banning separatist parties and arresting its regional president, Quim Torra, who has vowed to continue the secession drive.

The crowd responded by chanting ‘Torra to the dungeon’. 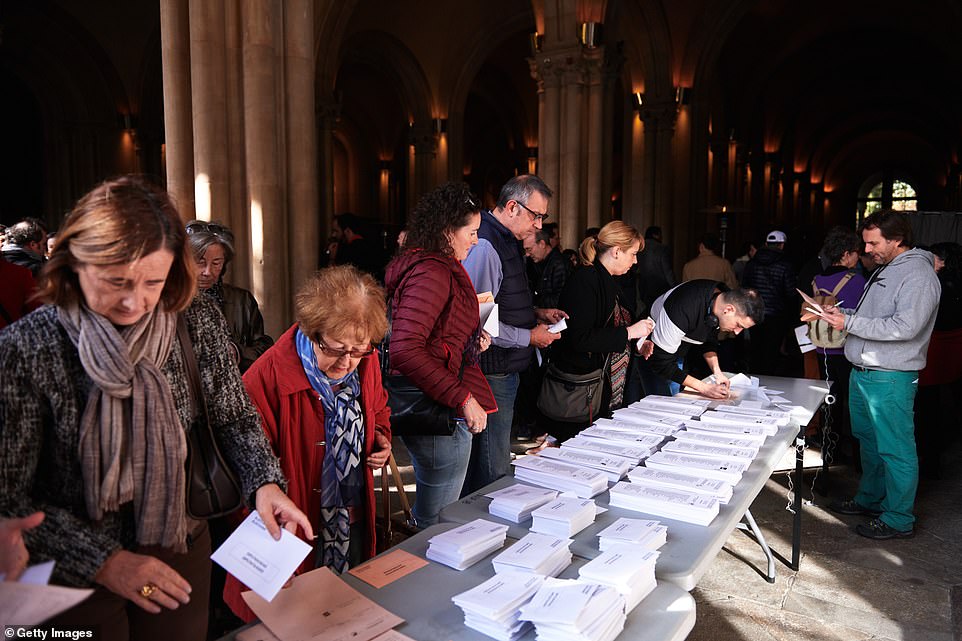 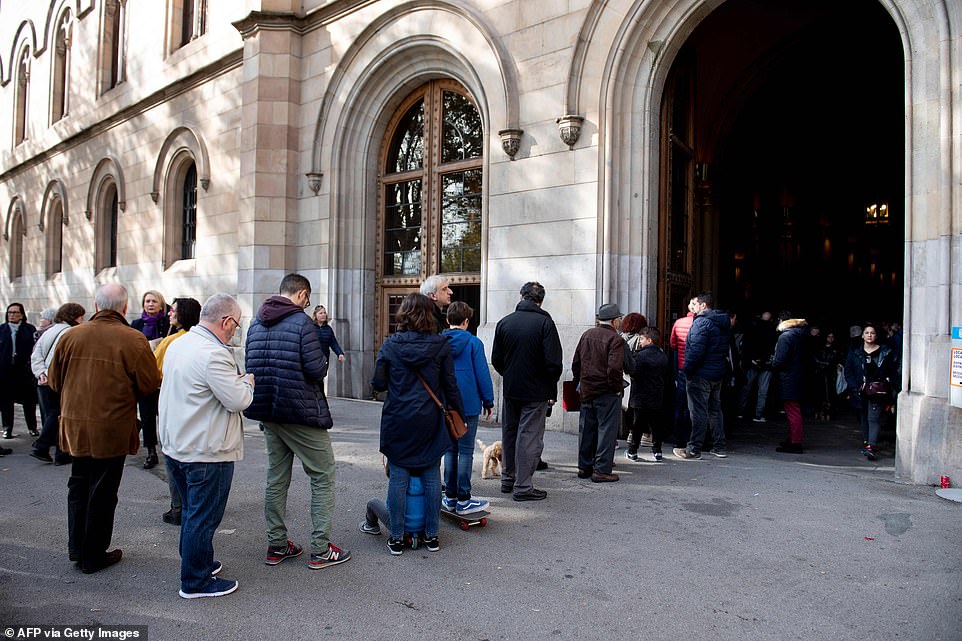 Spanish voters queue outside a polling station in Barcelona before casting their votes. No party is expected to win the crucial 176 seats required to gain a working majority in the parliament 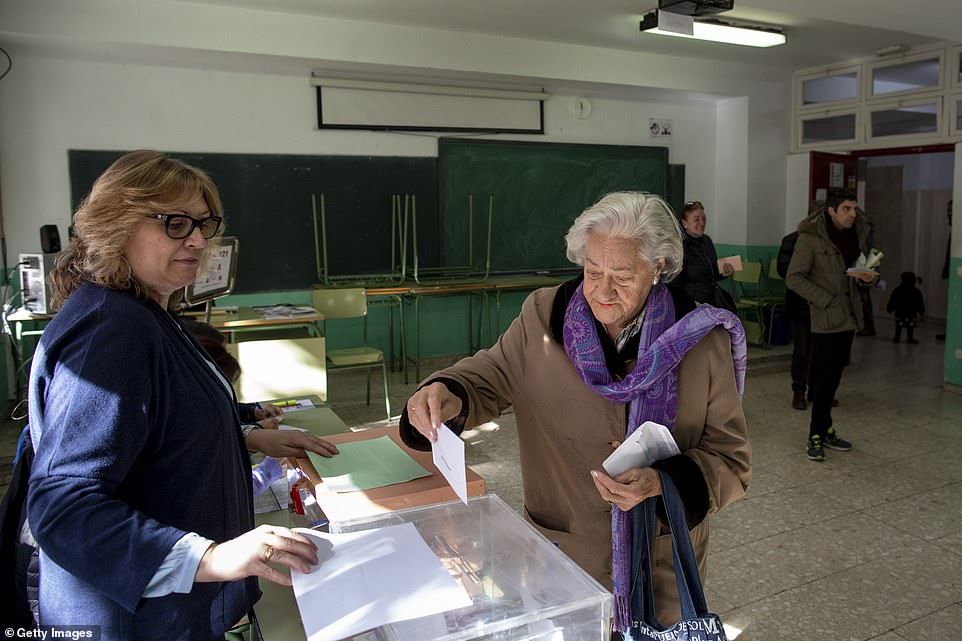 A woman casts her vote in Madrid, Spain, during the country’s general election. In a move that could garner further support the PSOE government has exhumed the body of the country’s former dictator Francisco Franco 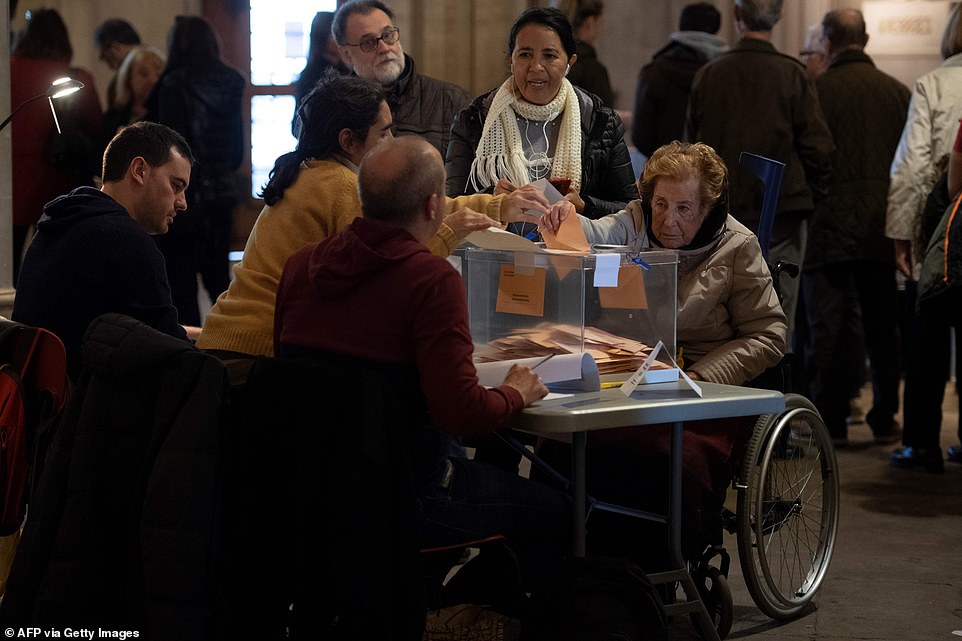 A woman in a wheelchair casts her vote in Barcelona, Spain. Tensions have been heightened due to calls for Catalan independence and protests in the streets leading up to the election

‘I voted for the right because the most important thing is the unity of Spain and pensions,’ said Rafael Garcia.

The 84-year-old did not want to say which party got his vote at a polling station in Madrid’s northern Hortaleza neighbourhood where Abascal lives.

Vox won 24 seats in parliament in the last election in April, in the first significant showing by a far-right faction since Spain’s return to democracy following the death of dictator Francisco Franco in 1975.

This time Vox could double that number, polls suggest.

In recent days, Sanchez has repeatedly raised the alarm about Vox’s ‘aggressive ultra-rightwing’ policies, warning the party would drag the country back to the dark days of Franco’s dictatorship.

‘I thought of not voting… but then I would be upset if the right won with the far-right,’ said Mari Carmen Lopez, a 25-year-old physical therapist, after casting her vote for far-left Podemos in Barcelona. 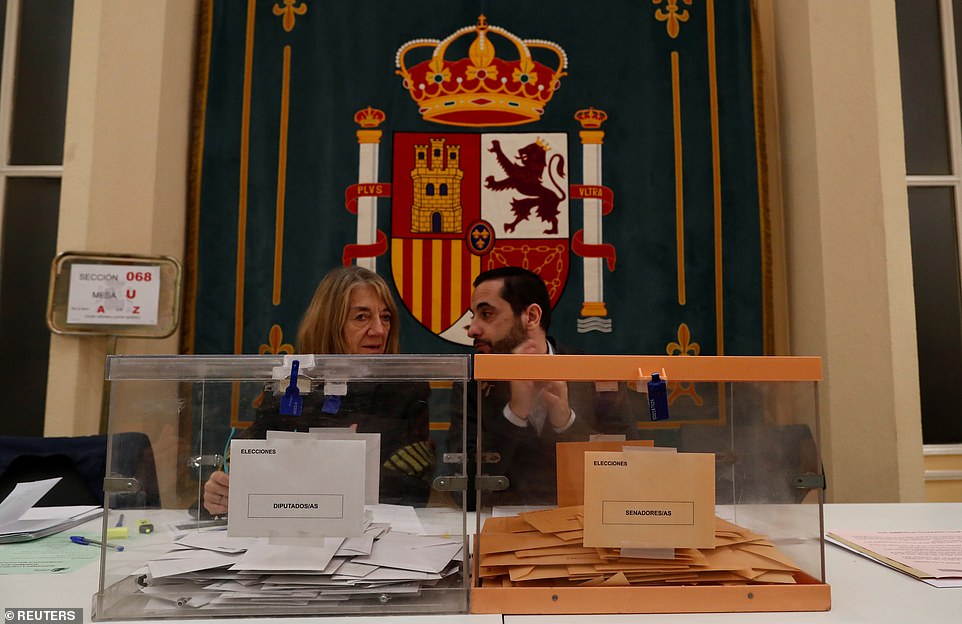 Two election workers watch as votes are cast in the country’s capital Madrid. Polls close at 8pm, or 9pm tonight, with results expected a few hours after they close 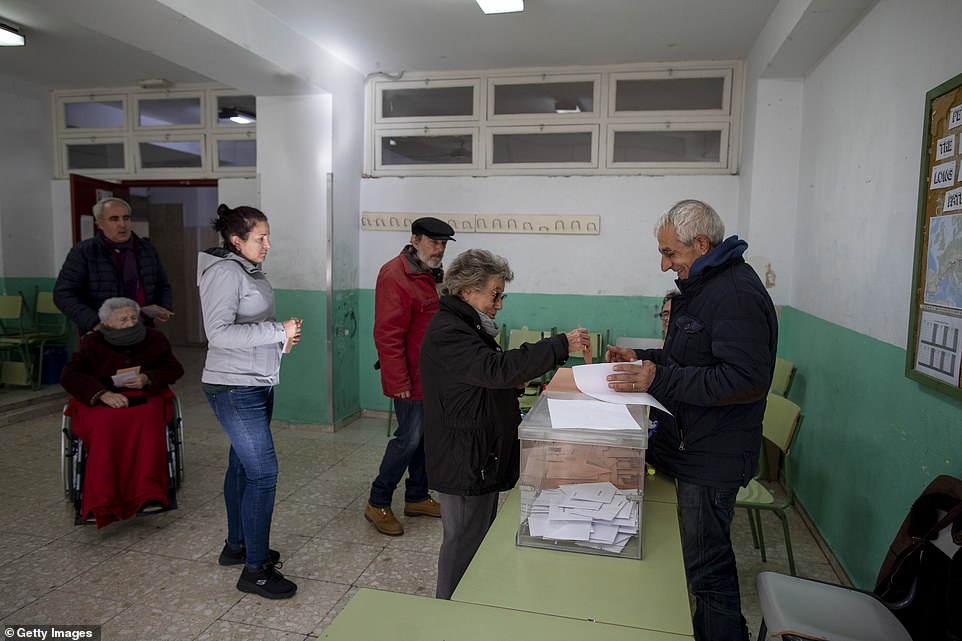 Citizens arrive early in the morning to cast their vote in Madrid, Spain. PSOE is not expected to secure enough seats to form a majority in parliament 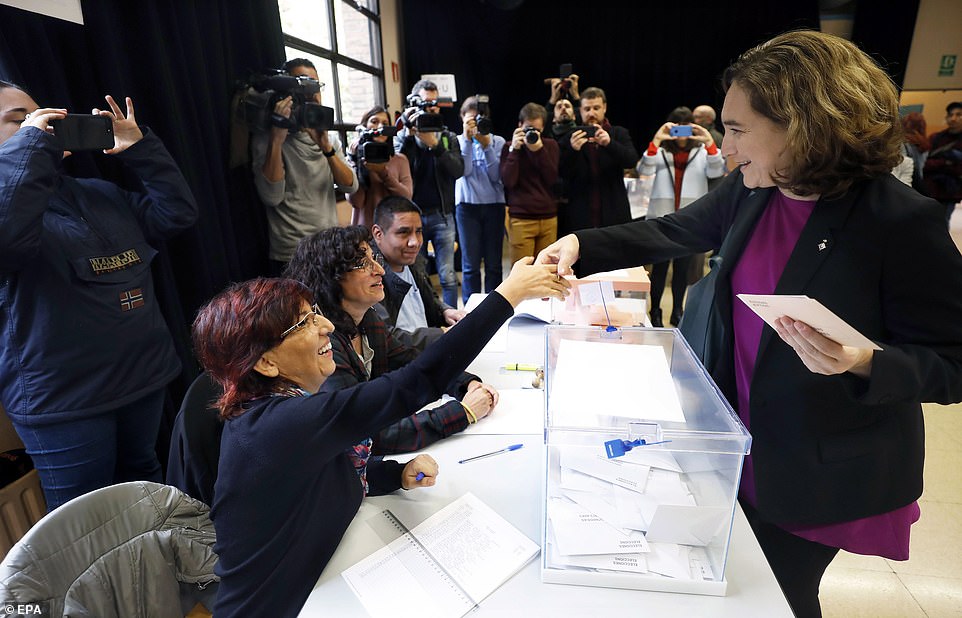 Barcelona’s mayoress Ada Colau shakes hands with election workers as she arrives to cast her vote in Barcelona, Spain

Spain has been caught in political paralysis since the election of December 2015 when Podemos and business-friendly Ciudadanos entered parliament.

That put an end to decades of dominance of the two main parties, the PP and the Socialists, in the eurozone’s fourth-largest economy.

But there is a risk Sunday’s vote will only prolong the agony.

With no single party able to secure the required 176 seats for a majority, the Socialists are likely to opt for a minority government, ING analyst Steven Trypsteen said.

‘Voting intentions appear to have changed since the April election. But these changes will not make it easier to form a government,’ he added. 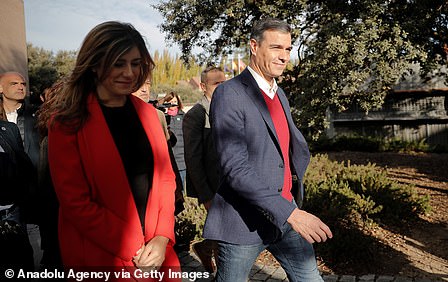 Socialist party leader Pedro Sanchez, 47, a trained economist, called the snap election after failing to secure support from other parties after winning the most votes, but no working majority, in an election in April.

Most opinion polls point to the PSOE re-emerging as the largest party but again landing far short of a majority, and probably with fewer seats than in the previous ballot, requiring the support of other parties to form a government.

Recent events, particularly tensions over separatism in Catalonia, have boosted right-wing parties and could reshape the distribution of seats.

On Oct. 24, Sanchez’s caretaker government removed the remains of late dictator General Francisco Franco from a state mausoleum in a historic, symbolically powerful step that could help him mobilize left-wing voters.

PSOE is Spain’s oldest active party and one of two that have dominated the political landscape since Franco’s rule ended with his death in 1975. It has been in government longest since then. 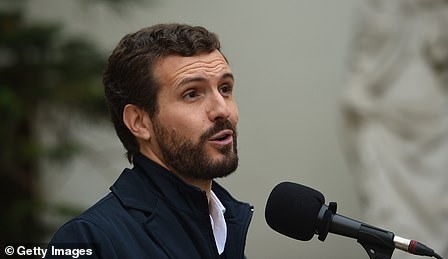 A conservative, Christian democratic party, and the Socialists’ main rival for decades.

Pablo Casado, a 38-year-old lawyer and economist, became party leader a month after the government of Sanchez’s predecessor Mariano Rajoy was ousted by Sanchez last year.

He obtained PP’s worst ever election result in April with just 66 seats in the 350-seat house, but polls see PP faring much better next week, possibly putting Casado in the position of kingmaker.

Casado has promised to cut taxes and has called for Catalonia to be ‘reconquered’ following the northeastern region’s failed independence bid in 2017.

A critic of Sanchez’s handling of the Catalan issue, Casado is known as a defender of family values, the monarchy and the Catholic Church, and an opponent of abortion and euthanasia. 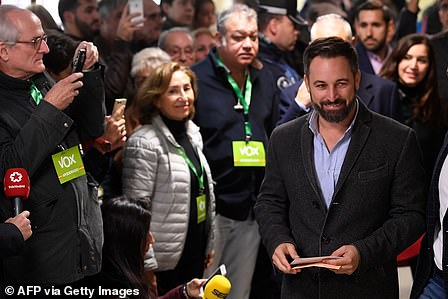 An anti-immigration, nationalist party founded in 2013 by former PP members.

In April, Vox became the first far-right party to enter Spain’s parliament since the 1980s, with 24 seats, and polls show it could now become the third-biggest force there, with possibly as many as 44 seats.

Vox opposes gender equality laws and is strongly against autonomy for Spain’s regions.

Its leader Santiago Abascal, 43, is a tough-talking career politician from the Basque country, who harshly criticised the exhumation of Franco and who wants Catalan separatism quashed.

Echoing U.S. President Donald Trump’s anti-immigration rhetoric, he has called for a secure wall to be built around the Spanish enclaves of Ceuta and Melilla and for neighbouring Morocco to pay for it.

‘I am a supporter of discrimination,’ he told 7TV Andalucia in 2017. 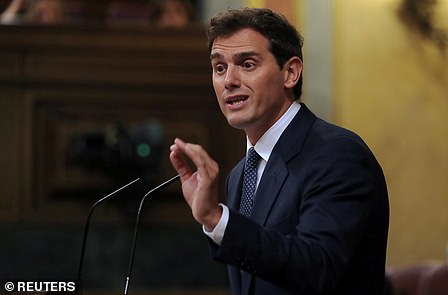 A centre-right, pro-European party originally from Catalonia and part of the Alliance of Liberals and Democrats for Europe that first won Spanish parliament seats in 2015.

Its leader, Albert Rivera, 39, worked in a bank before founding Ciudadanos in 2006.

Rivera, who backed Sanchez in his failed 2016 bid for premiership, refused him support after April election, leaving him no option but to seek support from left-wing Unidas Podemos.

Polls show Ciudadanos would lose seats after several senior figures quit over regional deals it has struck with the far-right. Ciudadanos is a stalwart defender of Spain’s unity and strongly opposes any concessions to separatists.

PABLO IGLESIAS’ UNIDAS PODEMOS (TOGETHER WE CAN) 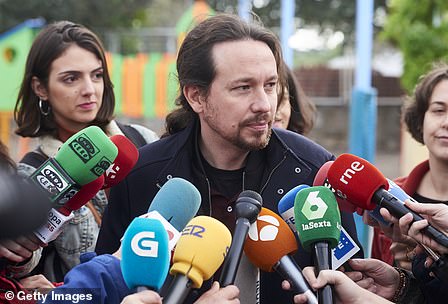 An alliance of left-wing Podemos, United Left, and other parties, created in the run-up to the 2016 election and rooted in the anti-austerity protest movement. The name was tweaked in 2019 to make it female to reflect its pro-feminism stance.

Podemos had tried in vain to negotiate a governing coalition deal with PSOE up to the very last minute in September, but Sanchez ultimately refused to give them cabinet posts, saying that Iglesias’ excessive demands had torpedoed such a solution.