Spice Girls gig descends into chaos as female fans are filmed punching, shoving and pulling each other’s hair in front of stunned children

The Spice Girls tour seemed to descend into chaos on Thursday after three adult females started punching, shoving and pulling each other’s hair in front of shocked children.

Stunning footage shows the three women brawling in Sunderland’s Stadium of Light, where 50,000 fans had turned out to see Thursday’s show.

It comes after fans complained that the Coventry concert collapsed into anarchy on Monday when they were left stranded in the car par for hours after the show had ended. 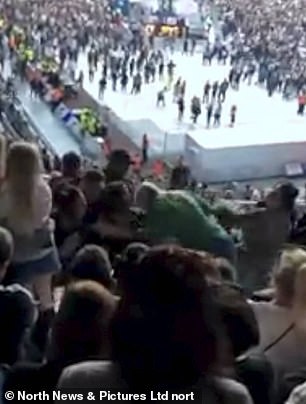 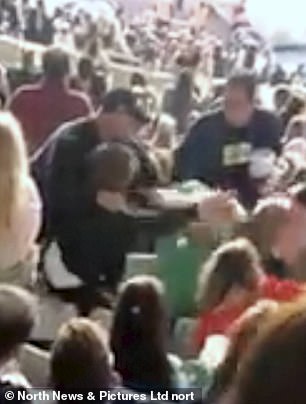 Horrifying footage shows two women appearing to have an argument before one yanks the woman wearing green’s hair.

The women in green falls forward, headbutting the other woman as she tumbles onto the seats in front.

Enraged, the other woman grabs onto her hair with both hands and appears to pull.

A friend of the woman in green then leans over her friend and starts trying to punch her attacker. Dismayed children can be seen watching in the video.

The three woman brawled while Geri, Emma, Mel B, and Mel C were on stage. 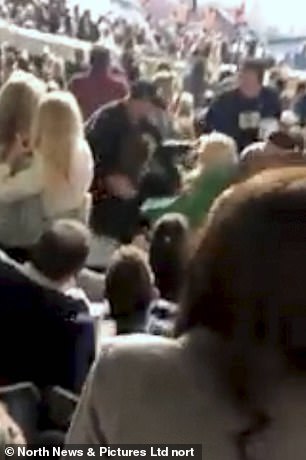 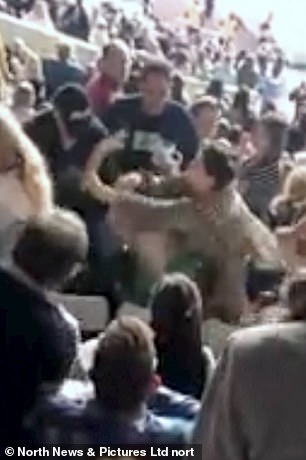 Horrifying footage shows two women appearing to have an argument before one yanks the woman wearing green’s hair. 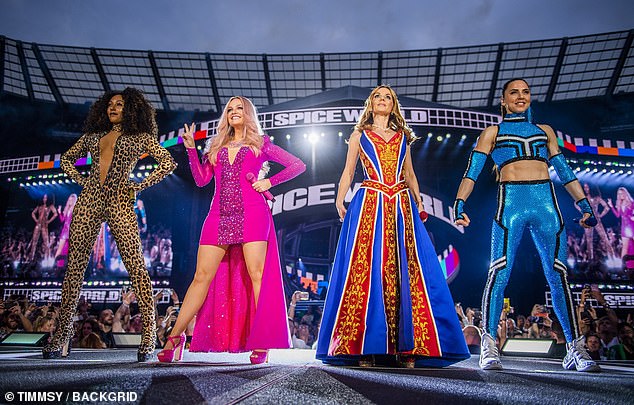 Onlooker Gemma Coburn, 40, who filmed the fight, came to the conert last minute with friends.

Where are the Spice Girls heading next?

Following their show in Sunderland on Thursday, where three women had a fight, the Coventry show on Monday, where the car park descended into chaos, and their Dublin show where fans stormed out the stadium, the Spice Girls still have a few dates left on their 2019 World Tour.

Tonight they will play at the Murrayfield Stadium in Edinburgh before heading to Bristol for a performance on Monday.

Then the group will return to London for three final shows from Thursday to Saturday next week.

Speaking of her shock she said: ‘These are grown women, it’s a disgrace.

‘It’s not something I’d expect to see at as Spice Girls concert.

‘It’s not the way to go on. There were kids there in front of us.

‘It totally goes against the girl power thing the Spice Girls champion.

‘It’s what they’re all about.’

‘The Spice Girls were on stage talking but they wren’t singing at that point.

‘I just saw them kicking off all of a sudden they were shouting and the next thing they were really going for each other.

‘The video’s only a few seconds long but the fight went on for ages.

‘Security didn’t come for a long time because we were sitting up at the top, at the back.

‘I think they were drunk. They’d been drinking wine and stuff before.’

Gemma, from North Tyneside, Newcastle, was already hesitant about going to the Stadium of Light – Sunderland football club’s home – ground. 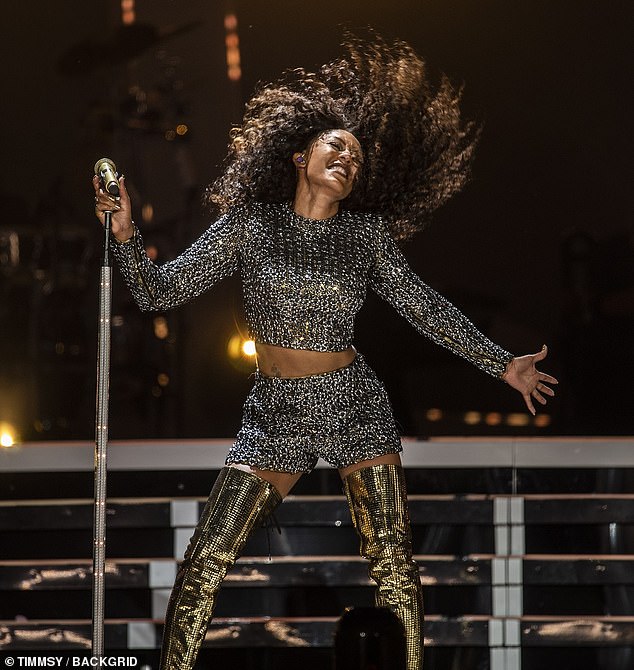 Spice Girls fans also claimed they were turned away from the Coventry leg of the tour, despite possessing tickets

She said: ‘I was a little bit disappointed, I’ve been twice now and I just don’t really like that venue, there’s always trouble.

‘I won’t be going back to the Stadium of Light.’

Northumbria Police confirmed they are aware of the incident in the stadium and are looking into it.

A spokesperson for the force said: ‘We have not received any report of a fight inside the stadium but we are aware of the video and will carry out enquiries.

‘We would add that more than 50,000 people were in the Stadium of Light for the concert last night and there was just one ejection.

‘The vast majority behaved impeccably and enjoyed a fantastic night of music.’

Fans took to Twitter on Monday to complain about their experience at the Coventry show.

One disgruntled fan tweeted: ‘Bag checks were stopped. Security throwing people out for no reason. People with tickets not allowed in as standing pitch full. Now 1H15 to get out carpark and I’ve moved 6 inches.’ 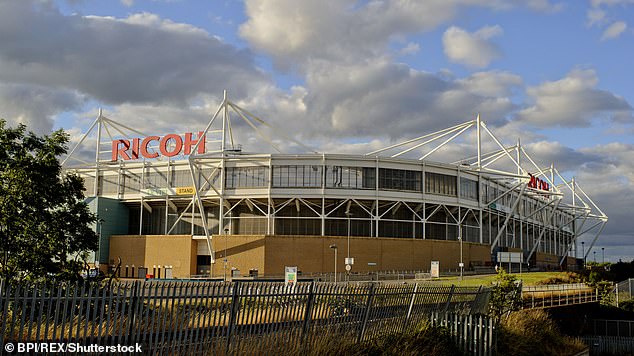 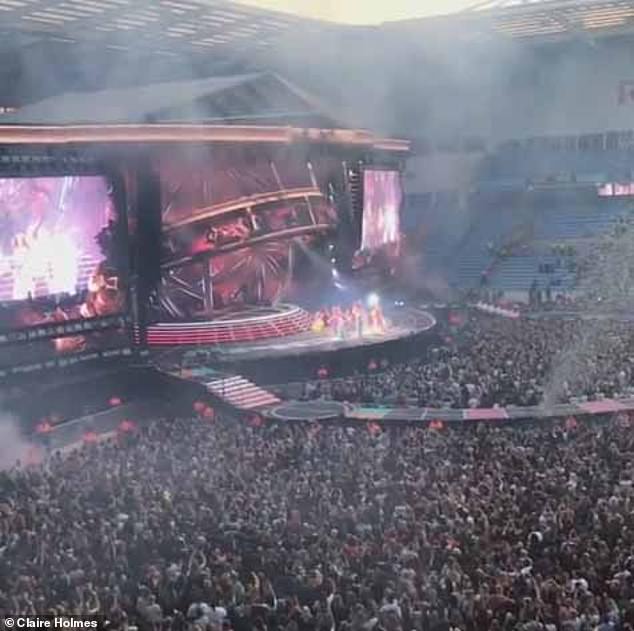 One disgruntled fan tweeted: ‘Bag checks were stopped. Security throwing people out for no reason. People with tickets not allowed in as standing pitch full. Now 1H15 to get out carpark and I’ve moved 6 inches’

A disappointed fan contributed: ‘It’s total s***!! My friend just read somewhere that they stopped checking bags and scanning tickets too as they couldn’t cope with the volume of people!’

Another upset ticket holder vented: ‘Great show when you got in. It was like the crowds arriving was a surprise.

‘Stewards outside looked lost with no direction. Gates opened to let crowds in at end of @JessGlynne. Doesn’t look good for anyone. Doubt many tourists will be back! @RicohArena.’

At their debut performance in Dublin last month hoards of angry fans stormed out of the £146-a-ticket concert after being angered by sound problems.

The fans claimed they couldn’t even tell what songs were being played during the show at Croke Park.

Mel B was the only Spice Girl to address the furious backlash the group faced over their debut performance due to sound issues which saw some fans walk out in frustration.

In a candid video uploaded to Instagram at 6am yesterday, Scary Spice admitted to sound problems and pledged to improve the sound quality for the next show.

Speaking into the camera whilst lying in bed, Scary Spice appeared irked as she said: ‘Hey guys thank you for attending our show tonight in Dublin.

‘We will see you in Cardiff and hopefully the vocals and the sound will be much, much better.’