Starmer could work with Lib Dems for a possible election deal

Is Keir Starmer plotting a Lib Dem pact? Clues of a possible election deal in Labour leader’s keynote speech as he rules out working with the SNP

Labour opened the door to a ‘grubby’ election deal with the Liberal Democrats yesterday, with Sir Keir Starmer declaring that it had become the ‘party of the centre ground’.

The Labour leader used his keynote speech to the party’s conference in Liverpool to rule out a coalition with Nicola Sturgeon, saying there could be ‘no deal under any circumstances’ with the SNP.

But he was silent on a possible deal with the Lib Dems, whose support many Labour figures believe will be needed to secure the keys to No 10.

He tried to position himself as the natural heir to Tony Blair, even repeating the former prime minister’s claim that Labour was ‘the political wing of the British people’. 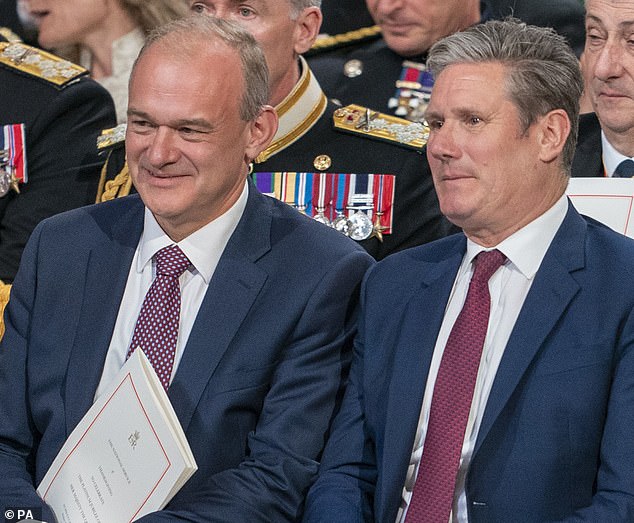 Lib Dems leader Ed Davey (left) and Labour leader Keir Starmer (right) earlier this year. At the Labour Party conference yesterday Starmer remained quiet on the possibility of a deal with the Liberal Democrats to secure No10 at the next election

‘On climate change, growth, aspiration, levelling-up, Brexit, economic responsibility we are the party of the centre ground,’ he said, in a repositioning apparently meant to move Labour closer to the agenda of the Lib Dems.

He moved to exploit the turmoil in the financial markets and pour scorn on the record of the Conservatives.

He said last week’s emergency Budget had left ‘Britain all at sea, where a cloud of anxiety hangs over working people’, and ministers had ‘lost control of the economy’. He also savaged the decision to axe the 45p top tax rate, which Labour has vowed to reinstate. 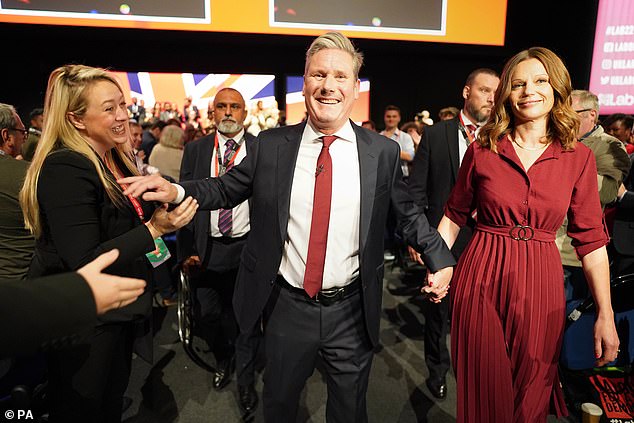 Starmer tried to position himself as the natural heir to Tony Blair, even repeating the former prime minister’s claim that Labour was ‘the political wing of the British people’

He added: ‘Higher interest rates. Higher inflation. Higher borrowing. And for what? Not for you. Not for working people. For tax cuts for the richest one per cent in our society.’

Sir Keir said people should never ‘forget’ nor ‘forgive’ the role played by the Government if interest rates rise, adding: ‘This is a Labour moment.’

Sir Keir’s speech focused heavily on green issues – including a plan to create a state-owned firm, Great British Energy, to invest in renewables. The organisation, which would effectively be run by shadow climate change secretary Ed Miliband, is central to Labour’s goal of doubling the number of onshore wind farms by 2030 and increasing solar panels and offshore turbines.

Sir Keir said he wanted to transform the UK into a ‘green growth superpower’, and said the drive could create one million jobs. In a wide-ranging speech, he also:

Labour MPs are increasingly confident that the Tories can be beaten after a poll yesterday gave the party a 17-point lead.

But privately, Shadow Cabinet members acknowledge Labour requires help from the Lib Dems. One source said: ‘We need the Lib Dems to do well against the Tories in parts of the country where we can’t win – there is no point us fighting them there.’

A Labour spokesman denied Sir Keir was opening the door to a Lib-Lab coalition. Referring to Sir Keir’s refusal to get into bed with the SNP, the spokesman said: ‘A similar thing applies to the Liberal Democrats. We are campaigning for a majority Labour government.’ But former Tory minister Maria Caulfield warned a Lib-Lab coalition would unpick Brexit. 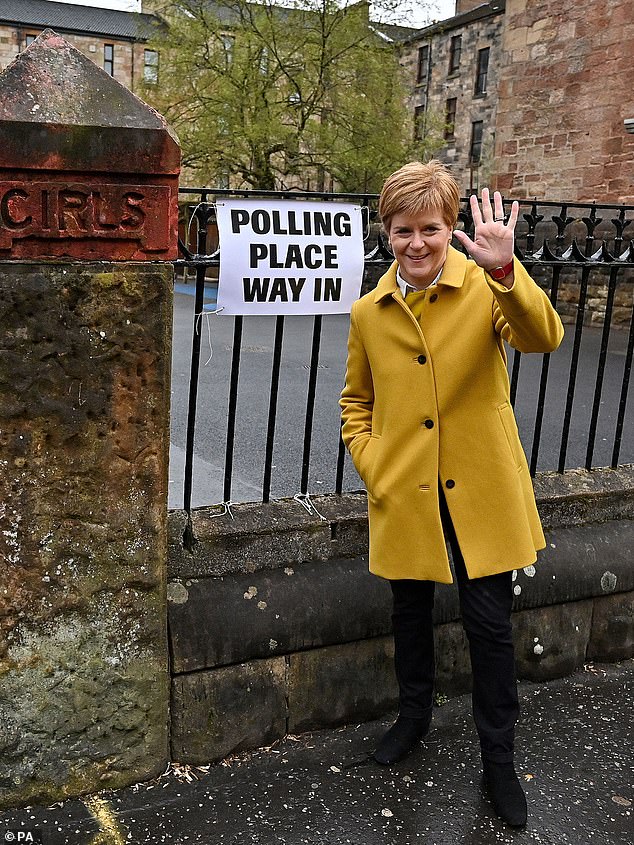 The Labour leader used his keynote speech to the party’s conference in Liverpool to rule out a coalition with Nicola Sturgeon (pictured), saying there could be ‘no deal under any circumstances’ with the SNP

She added: ‘For all his bluster, Keir Starmer is keeping the door open to a grubby backroom deal with the Liberal Democrats because he can’t rely on running on his own record. And we know the price of Lib Dem support will be to renege on the referendum result and Brexit.’

But Sir Keir sought to win back voters who had deserted Labour over Brexit – including those in northern Red Wall seats.

Despite spending years trying to reverse the referendum result, he insisted he would now work to make a success of it, adding: ‘If you voted to take control of your life and for the next generation to have control of theirs, then I say to you, that is what I will deliver.’

He also issued a coded warning to the Left that spending constraints stop the party ‘being able to do things – good Labour things – as quickly as we might like’.