Stateless, school-less and at risk: The 45,000 children born under Islamic State

Hammam al-Alil, Iraq: Five-year-old Khatab Khalaf wonders why he can't go to school like other boys his age.

He cannot because, officially, he does not exist.

Like 45,000 other children born during Islamic State's rule and now living in camps across northern Iraq, Khatab is not acknowledged by the government.

During its three-year-reign, the jihadist group established its own state bureaucracy; registering births, deaths and marriages as well as collecting tax and distributing welfare benefits.

But since the defeat of IS here in early 2017, the records – stamped with its notorious black flag insignia – have become worthless.

In Iraq, identification papers are required for everything from enrolling in school to receiving medical care, from owning property to gaining formal employment. 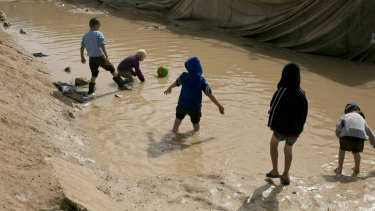 Children play in a mud puddle in the section for foreign families at Al-Hol camp in Hasakeh province, Syria. Credit:AP

Khatab and his mother Ashwaq, whose own ID cards were destroyed in an airstrike on their home, have effectively been rendered stateless.

"He knows nothing of the world," says Ashwaq, 41, who has three other children. "For the last two years he has not left this camp. He fetches water and brings it back to the tent. That is all he does."

Human rights groups are warning that these 45,000 disenfranchised children are increasingly vulnerable to radicalisation, raising further doubts about peace in the region after the fall of Islamic State, also known as Isil and Daesh.

Khatab, a shy boy who hides behind his mother in the presence of strangers, thumbs through a colouring book that has already been filled in. His name in Arabic means "writer", but Khatab can neither read nor write.

"I have nothing to do all day. I would like to be learning," he says, looking up at his mother. "They say we can't because we are Daesh." 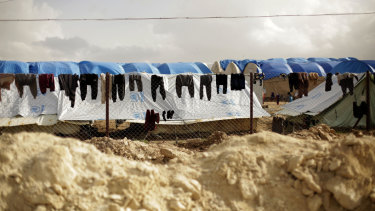 Laundry dries on a chain-link fence at Al-Hol camp, in the section where foreign families from Islamic State-held areas are housed, Hasakeh province, Syria. Credit:AP

Khatab suffers the double misfortune of also being born to members of IS. His father, Mohammed, was killed fighting the Iraqi army in their hometown of Hawija three years ago. Ashwaq, a housewife, had been sympathetic to the group.

Obtaining new documents requires security screening by the Interior and Intelligence ministries, which families like Khatab's automatically fail because of their IS affiliations.

Ashwaq has not been charged with any crime but nevertheless feels she and her children are serving a sentence. Only the eldest of Khatab's siblings, whose birth was registered before Isil's takeover, is able to attend school and Ashwaq complains that even getting rations to feed the younger ones is a struggle.

While they are not forced to stay in Hammam al-Alil camp, without IDs it has become virtually impossible to return home.

"Our husbands were all either killed or arrested. How long must we continue to pay for their sins?" asks Ashwaq, who is reluctant to talk much about the role her husband played in IS. "OK, fine, maybe I deserve this treatment. But do not punish my children. They now believe they are Daesh because that's what they are told. How can a child be Daesh?"

Those thinking about heading back to their home towns to live out a quiet life have been met with another hard reality.

Vigilante justice in the form of revenge killings of IS relatives is a constant threat to which some believe the government is turning a blind eye. 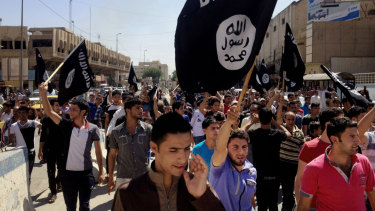 In another tent in the "Islamic State section" of Hammam al-Alil camp, Khawla Hassan, 39, has been trying to apply for papers for her and her children.

After she officially denounced her IS fighter husband in court she was told she needed to go to the local government office in her hometown of al-Shura with the court papers.

"I went there but the official told me I couldn't move back home," she said. "He told me that if I returned I would be killed by the people who suffered under Isil. He said I should reap what I have sown."

Khawla's daughter, Amina, 10, has suspected kidney failure. Water gathering around her organs has swollen her stomach three times its normal size. She can no longer sleep lying down for fear of asphyxia by drowning.

She is in desperate need of surgery but cannot be treated at the local hospital without presenting identification papers proving she is Iraqi. Her mother says they are in the home they are not allowed to return to, leaving them in a catch-22 situation.

Khawla says she had to resort to selling some of their food rations to buy laxatives, which only relieve the symptoms.

Iraq last month floated plans to set up special courts that would allow children born to IS parents to apply for documentation but critics say it could be years before this is in place and would risk further stigmatising them by taking them out of the mainstream legal system. NGOs accuse the Iraqi government of meting out a "collective punishment".

Jan Egeland, secretary general of the Norwegian Refugee Council, which helps administer Hammam al-Alil camp, said: "Children are not responsible for crimes committed by their relatives, yet many are denied their basic rights as Iraqi citizens.

"Undocumented children risk being left on the margins of society if this issue is not addressed immediately."

Without any economic or legal protection, they are at real risk of recruitment from armed groups as they get older, he warned.

"We cheered the Iraqi army when they took back the area," says Ashwaq, who initially welcomed Isil when they reached Hawija in the summer of 2014, but had grown disillusioned by the time the town was liberated in late 2016. The way she sees it, the government squandered that goodwill by leaving an entire generation of children "to rot".

It is the same complaint many Sunni Iraqis had during the de-Baathification period following the fall of Saddam Hussein.

The minority felt marginalised and, at times, persecuted, by the Shia-dominant government in Baghdad.

Lama Fakih, acting Middle East director at Human Rights Watch, said: "The Iraqi government is effectively disenfranchising an entire group of people on the basis of actions committed by others. 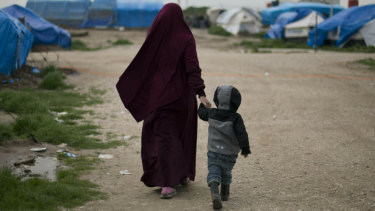 A woman walks with their son at Camp Roj in north Syria. Credit:AP

"Criminalising broad swathes of people won't make them disappear, the government cannot simply make the problem go away by ignoring it. You need only to look to Iraq's recent history to see how that can turn out," she said. "By putting them in camps and separating them from society they are increasing the risk of further radicalising these women and children," she said.

Ashwaq can see no future for her children, who themselves struggle to remember what life was like outside Hammam al-Alil's gates.

When 10-year-old Amina was asked what she wanted to be when she grew up, she stared blankly and shrugged.

Nobody had ever asked her that question before.

and, at, school-less, Stateless
World News