‘Using Remembrance Day to advertise is a little disrespectful!’ Instagram users slam Stella McCartney for plugging her £1,500 coat that Meghan Markle wore to the Cenotaph

Stella McCartney has been slammed by social media users for plugging one of her coats worn by the Duchess of Sussex on Remembrance Day.

Meghan Markle teamed her £1,545 belted wool Stella McCartney coat with a wide-brimmed hat on Sunday at the Cenotaph.

But the designer, 48, then used an image of the royal to advertise the coat on her Instagram account. 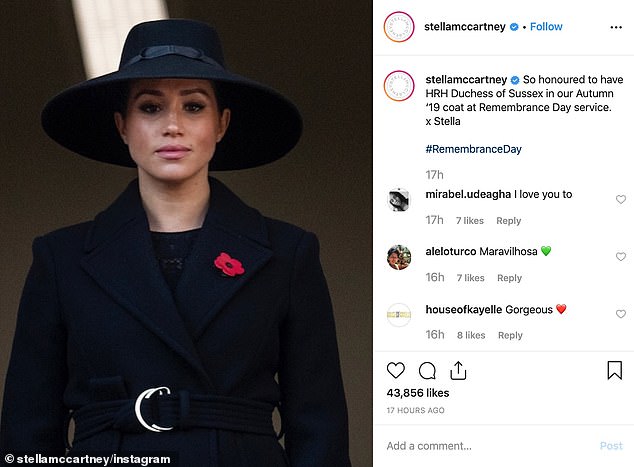 Her followers quickly criticised her for the ‘inappropriate’ and ‘tacky’ post

McCartney said: ‘So honoured to have HRH Duchess of Sussex in our Autumn ’19 coat at Remembrance Day service. x Stella.’

Her followers quickly criticised her for the ‘inappropriate’ and ‘tacky’ post.

One said: ‘Remembrance Day is to honour those that fought for us not to use for advertising purposes. Pretty shocked.’

TinaThompson2607 said: ‘Nice – but not really a time to be advertising your clothes Stella!!’

Cherrypisa added: ‘This is a solemn occasion, not for promoting.’

Aly-b-yyc said: ‘Not an appropriate time to be selling your clothes. This is extremely tacky. I expect better of you, Stella.’

Earlier, the designer had posted a pic of poppies with the caption: ‘Remembering the ones that sacrificed to give us freedom x Stella.’

McCartney has previously been criticised for her environmental stance – with one of her collections modelled by Extinction rebellion campaigners.

It later transpired they had high air miles between them.