STEPHEN GLOVER: Look at all the leaders at today’s funeral and try telling me we’re the paltry little country our bien pensant detractors would have us believe

So the day has come. A day of mourning and sadness. But also of hope.

It’s reckoned that about four billion people will tune into the Queen’s funeral. Tens of millions of Britons will watch the proceedings in Westminster Abbey, the procession, and the committal in Windsor.

The pomp and ceremony will move countless hearts. This is a State occasion, which will probably surpass in solemnity and magnificence Winston Churchill’s funeral in 1965. But it is also a Christian service for a deeply Christian monarch.

Who could have dreamt less than a fortnight ago that it would turn out like this? For it seems to me that in the days following Queen Elizabeth’s death one myth after another has been exploded. 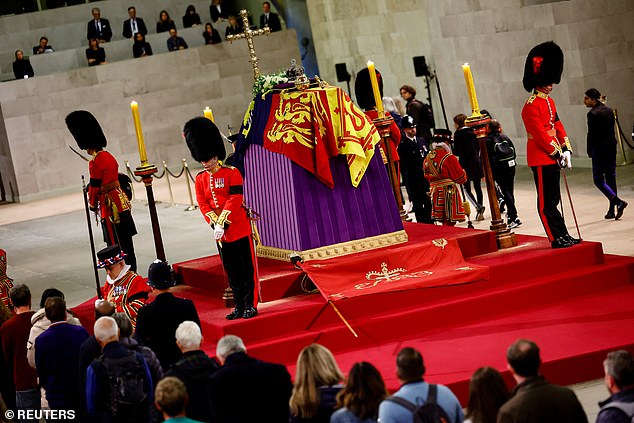 Look instead at the tens of thousands who have waited for up to 20 hours to catch a fleeting glimpse of the Queen’s coffin in Westminster Hall. How often are such people taken account of by elites who have been adept at seizing hold of our national narrative?

Today the received wisdom that Britain is an entirely secular country will be challenged. Even people who don’t regard themselves as religious may feel themselves touched by the sacred and divine.

The myth that people have no time for pageantry in a utilitarian age has also been confounded. The processions, music, uniforms and meticulous marching have helped to re-connect us to a largely forgotten past, and to revive our sense of nationhood.

How they must be gritting their teeth in the progressive fiefdoms of our land! There will be forlorn faces in parts of the BBC (though our State broadcaster has, almost despite itself, provided outstanding coverage), in many of our universities, at enlightened newspapers, and in Corbynista strongholds. It wasn’t meant to be like this.

Another commonplace trumpeted by our largely leftist intelligentsia is that post-imperial Britain is a small island, rendered even more irrelevant by the supposed idiocies of Brexit. That preconception has also been routed by the events of recent days. 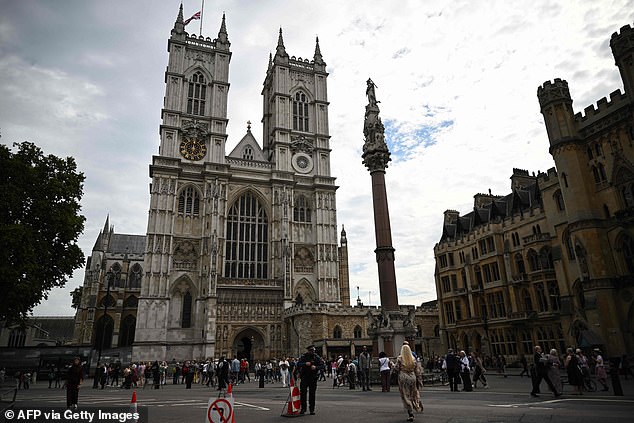 Tens of millions of Britons will watch the proceedings in Westminster Abbey, the procession, and the committal in Windsor

Would four billion people — or whatever the number may be — interrupt their routines to watch the obsequies of the monarch of an insignificant country, however singular and long-lived she might have been? I don’t think so.

Look at the presidents, monarchs, prime ministers and emperors who have flown from all corners of the world for today’s funeral. Of course they are honouring the Queen, but they are also acknowledging the importance of the country over which she ruled.

I don’t want to sound vainglorious but I don’t believe the death of a distinguished monarch in any other European nation — and there are several — would attract so huge a throng of respectful leaders.

Another piece of accepted wisdom shoved down our throats is that the United Kingdom is inevitably fracturing. Here I shall be cautious since I certainly don’t believe that the Queen’s death has miraculously restored old bonds which Westminster, and other, politicians have done much to loosen.

But the mourning in all four nations of the Kingdom has been heartfelt. In Scotland, which is allegedly on an inexorable path to independence, the Queen’s death was felt quite as deeply as in England.

In most of Scotland, the Queen was evidently regarded as their sovereign, not an import from south of the border. This, of course, is correct since the union of the two crowns pre-dates by more than 100 years the political union of the two countries.

Granted, there have been a few discordant voices. There was a smattering of anti-monarchist jeers among Dundee United fans on Saturday at a football match against Rangers, a team regarded as staunchly unionist. 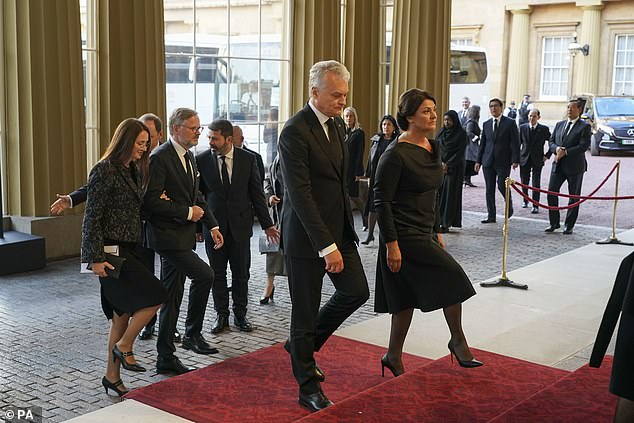 Look at the presidents, monarchs, prime ministers and emperors who have flown from all corners of the world for today’s funeral. Of course they are honouring the Queen, but they are also acknowledging the importance of the country over which she ruled

Yesterday some Celtic fans (whose club is often identified with Irish republicanism) unveiled a banner that was offensive to the Royal Family before a Scottish Premiership game against St Mirren. There are thugs and halfwits everywhere.

The fact remains that the monarchy is one institution that remains genuinely British. It has enormous power to hold us together despite the efforts of the likes of First Minister Nicola Sturgeon to tear us apart. I am sure King Charles understands this very well.

No, what has happened over the past few days suggests to me that Britain isn’t the irrevocably broken, paltry little country that its bien pensant detractors would have us believe. Alas, some sensible people may have been influenced against their own better judgment by this false depiction.

Look instead at the tens of thousands who have waited for up to 20 hours to catch a fleeting glimpse of the Queen’s coffin in Westminster Hall. How often are such people taken account of by elites who have been adept at seizing hold of our national narrative?

Doubtless there were tourists and others in what may have been the world’s longest queue who wanted to be present when history was made, and good luck to them.

But I suspect that most of them were patriotic Britons, of all ages and from many diverse communities, who were united in their love for the Queen, and their respect for the monarchy. I noticed many crossed themselves on passing the coffin.

As I say, enlightened types may have been quietly cursing over the past ten days — too wary, for the most part, to express their distaste on the national stage just now — as their version of Britain has been challenged by events.

They will of course be back with their noisy certainties once today’s affecting scenes have passed and begin to fade in the public mind. But will they be so powerful in the foreseeable future?

There is a final myth which I think will be undermined by the Queen’s funeral and the service in Windsor. This is that we live in an utterly godless society. Admittedly, it’s not a belief confined to the progressive intelligentsia.

Much has been written in recent days about the Queen’s sense of duty. What has perhaps been partly missed is the source of her lifelong service. For her it was undoubtedly God.

This is what the Queen said in one Christmas broadcast, and it was surely written by her own hand: ‘For me the teachings of Christ and my own personal accountability before God provide a framework in which I try to lead my life.’

Some critics may scoff at the idea that a hugely rich woman with several palaces at her disposal could really follow the teachings of Jesus, who said that it was easier for a camel to pass through the eye of a needle than for a rich man to enter the kingdom of heaven.

But she could, and she did, because she wasn’t corrupted by great riches, which I think was the danger Christ was warning against. She used her worldly position to bring about the innumerable ‘small acts of goodness’ to which she referred in another Christmas message.

She was fallible and human, of course she was, but she set out to live the Christian life. And that, I hope, will be what she hands on in her funeral today. My own grief will be partly stemmed by the thought that such a devout person can have had little fear of death.

Tomorrow will be another day. Life will appear to return to its rough-and-ready self.

But, in more ways than one, Queen Elizabeth’s death has taught us to look at ourselves in another way.