A huge python in China has regurgitated a 88-pound goat after stealing the animal from a farmer and swallowing it whole.

Footage shows the reptile spending an hour coughing up the prey in front of villagers in eastern China’s Fujian Province.

The 71-pound snake, measuring a whopping 13 feet in length, was released back to nature afterwards. 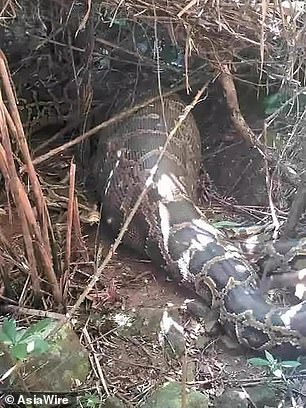 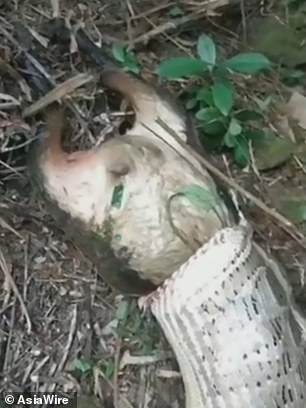 Local farmers Mr Yao found the predator with a bulging stomach in the mountains after yet another one of his livestock went missing. The python was made to cough up the animal

The snake was found on Sunday in the mountains outside the village of Longju in Anxi County, Quanzhou city, according to Quanzhou Evening News.

Goatherds Mr Yao and his wife went looking for the predator after yet another one of their livestock went missing.

‘I had a feeling something was eating them, then we found the large snake in the mountains near our flock.’

Mr Yao saw the python had a bulging stomach and suspected the goat had been eaten. He then called the police. 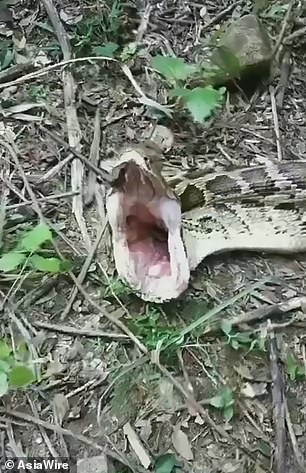 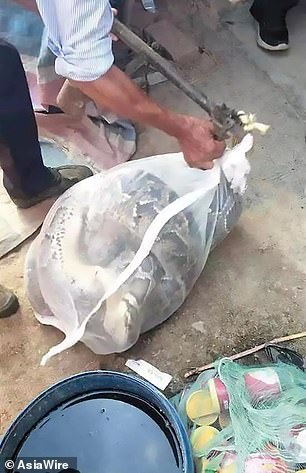 The snake was captured by members of the county’s forestry police (right) after spending an hour regurgitating the goat (left). It has reportedly been released back to the wild

Footage of the reptile – believed to be a Burmese python – can be seen curled up in the bushing and attempting to digest its dinner when the villagers barge in.

The animal weighing 32.5 kilogrammes (71 lb) and measuring more than 4 metres (13 feet) in length had swallowed Mr Yao’s goat – itself weighing 40 kilogrammes (88 lb) – whole, and the couple wanted it back.

Mr Yao continued: ‘We lifted it by its tail, and it spent the next hour spitting it out.’

Video shows a villager holding the snake by its tail and the animal slowing regurgitating the dead goat from its jaws.

The lifeless goat is then pictured covered in the python’s digestive fluids, having been asphyxiated to death and then swallowed.

Mr Yao said the snake was captured by members of the county’s forestry police.

Quanzhou Evening News reported the snake had been sent back into the wild by police.

Burmese pythons belong to a state-protected species in China, where the poaching or capturing of the animals is prohibited and punishable by law.