Student on road trip killed by woman he stopped to help

Florida student on a road trip through rural Alabama with girlfriend is shot dead by woman who pretended to be a stranded motorist so she could rob them at gunpoint: ‘Killer’ was living in a woodland camp with ARMED children

A Florida student was shot dead by a woman living in a woodland camp pretending to be a stranded motorist while he was on a road trip through rural Alabama with his girlfriend.

Adam Simjee, 22, was killed in Talladega National Forest in East Alabama after he pulled over to the side of the road to assist Yasmine Hider, who told the couple that her car had broken down.

Mikayla Paulus helped her boyfriend work on the car for an hour until they realized that it wouldn’t start – at which point Hider pulled out a gun on the duo and forced them into the woods.

Hider asked the couple to drop their cell phones and hand over their banking information – before Simjee pulled out a gun to protect himself and his girlfriend.

Simjee was fatally hit in the crossfire and was pronounced dead at the scene.

The robber was sent to the hospital to treat her wounds, where she was later charged with murder. 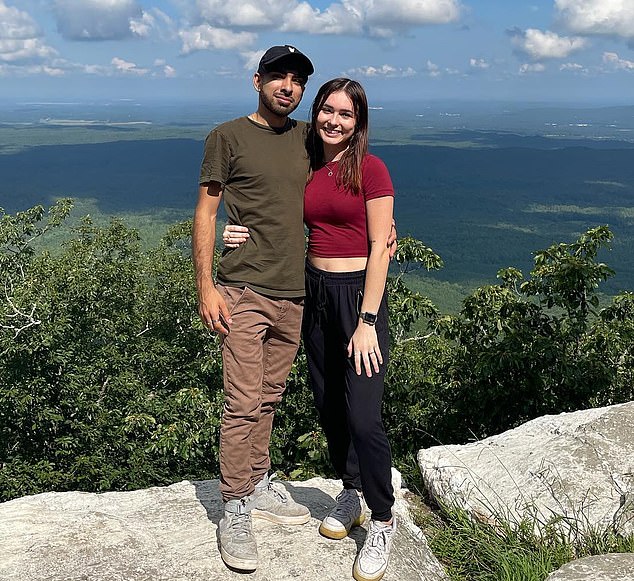 Adam Simjee, 22, (left) was shot to death in the Talladega National Forest in East Alabama after he had pulled over to the side of the road to assist a woman with car issues 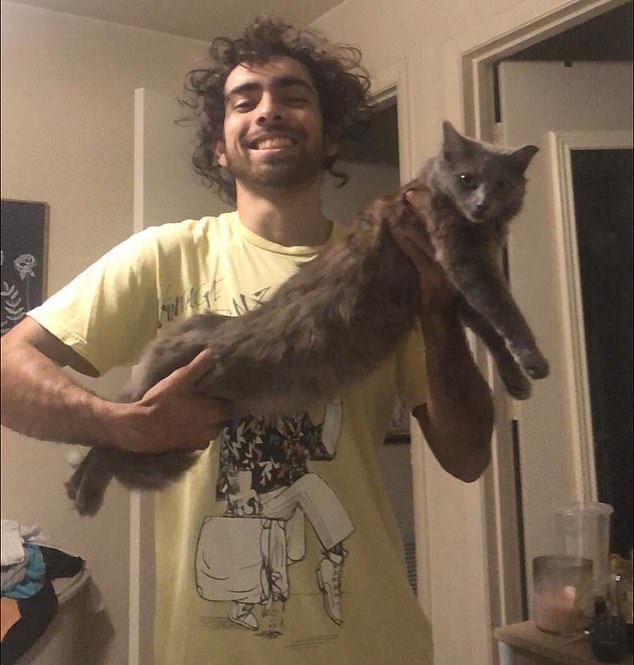 Simjee was driving with his long-time girlfriend, Mikayla Paulus, on a National Forest Service road when Yasmine Hider flagged them down and asked for help. The duo pulled over to assist since Simjee had just bought a full battery pack that was fully charged. Paulus, whose father is a mechanic, also thought she could lend a helping hand 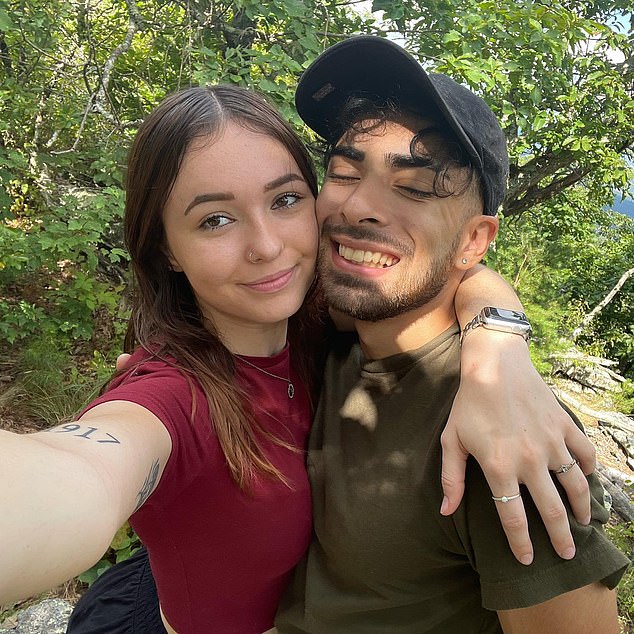 After an hour of being unable to jump start the vehicle, the two gave up. When they told the owner, Yasmine Hider, that it wasn’t going to start, she immediately took out a gun and ordered them into the forest 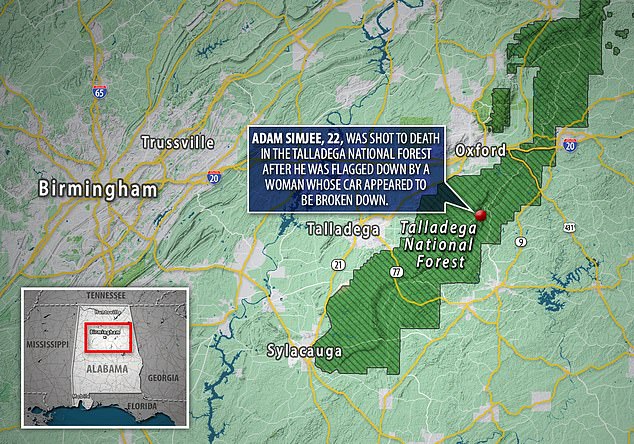 Simjee and Paulus were exploring the Alabama wilderness and getting ready to begin the school year at the University of Central Florida in Orlando.

In a heartfelt tribute to her longtime lover, Paulus said her ‘world ended’ the say Simjee died on August 14.

‘My reason for being, my soulmate, my life partner, the future father of my children, died in the middle of a state park in Alabama.

‘No words can begin to describe the shock and pain I’m in. We had our entire lives ahead of us. Adam is the best person I’ve ever met on the face of this entire planet.’

‘He was the most pure soul and he made sure I knew I would be safe when I was with him. It comforts me to say he passed in one of his favorite places, the forest in the mountains.

‘Losing Adam was my biggest fear, I always asked him what he expects me to do if he died, his answer was “to take care of our children.”

She continued, ‘so that’s what I’ll do. I’ll try to fight everyday to not leave our 3 cats, our fur children, behind, but this is and will be the hardest thing I’ve ever dealt with. No other scenario could match this pain.

‘I wish I could hold your hand one last time. I’ll love you forever, Adam Simjee, thank you for being my hero everyday for 4 years, the best 4 years of my life.’ 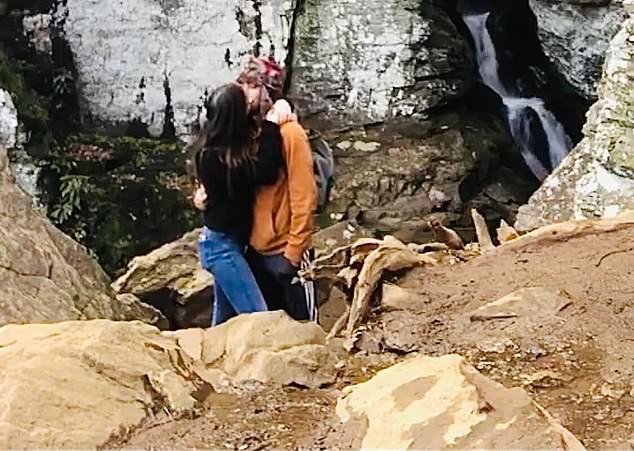 The couple were ordered to drop their cell phones and hand over their banking information by Hider. Simjee swiftly pulled out his gun and ordered Hider to get to the ground. Hider then began playing with her gun before firing once. Simjee fired multiple times 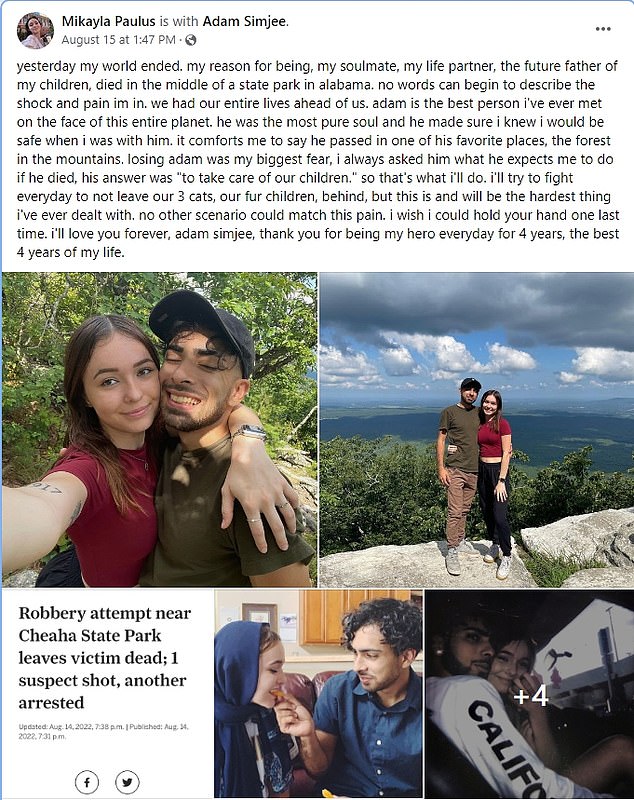 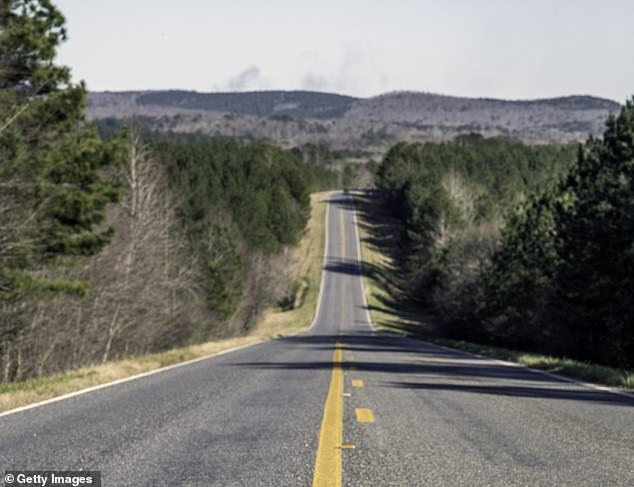 The couple were on a road trip throughout Alabama in celebration of their next journey together. The duo planned on studying at the University of Central Florida in the fall

The duo initially decided to pull over to help the ‘stranded’ woman because Simjee just bought a battery pack that was fully charged, Paulus told ABC3340 News.

As the couple was forced into the forest by Hider, Simjee swiftly pulled out his gun and ordered Hider to get to the ground.

‘That’s when she started messing around with her gun,’ Paulus recalled. ‘It jammed once but they both shot at each other, and she was shot a few times, and he was only once.’

Hider, who was injured nearby begged Paulus for mercy to allow her to flee the scene because ‘it wasn’t supposed to be like this’ and ‘she had a child.’

While waiting for 30 minutes for police to arrive, Paulus told Hider the duo would’ve given her ‘food and money’ and ‘she didn’t have to shoot.’

Paulus attempted to revive her unconscious boyfriend until emergency services arrived. The 22-year-old was pronounced dead at the scene.

Wounded several times during the confrontation, Hider was awaiting transfer to jail from a Birmingham hospital where she underwent surgery for her injuries.

Police then found a group of people who had been ‘living off the grid’ half a mile from where the robbery and shooting took place.

Officers approached the camp, and ordered Krystal Diane Pinkins, 36, to the ground.

But moments later, a five-year-old boy ran towards officers with a loaded shotgun.

Pinkins was taken to the Clay County jail, after cops allege that she was the other woman who was present at the robbery. Her son was taken by child welfare workers, and Pinkins was charged with endangering the welfare of a child in addition to the other counts.

Hider and Pinkins were charged with murder, kidnapping, and robbery. 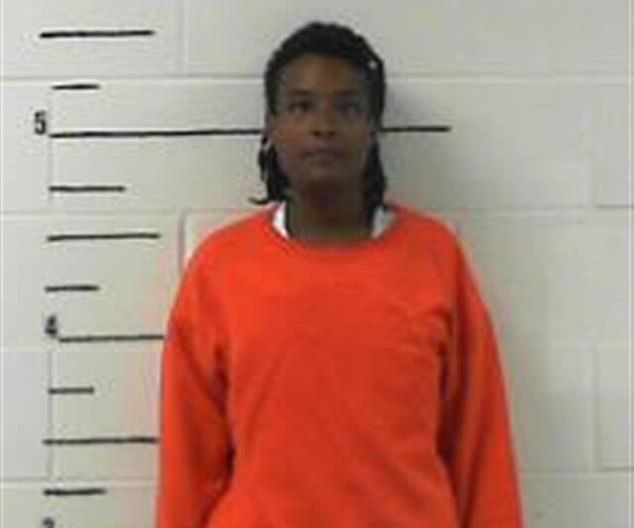 Krystal Pinkins (pictured) was arrested from the scene after police found her observing the incident unfold. Pinkins was living in the forest with five-year-old son, who authorities found carrying a shot gun when they arrived 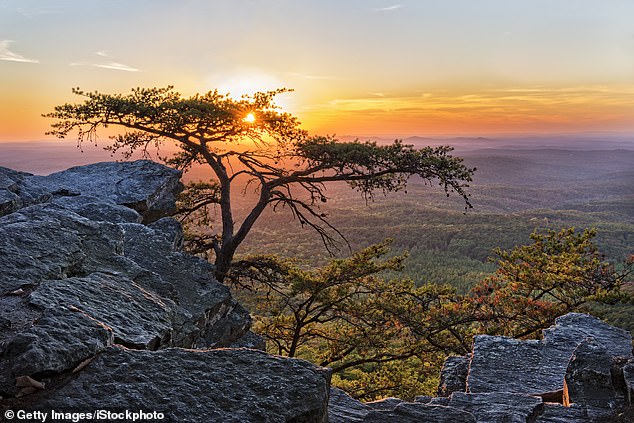 The women may have been living ‘off the grid’ in the National Forest, the sheriff’s statement said, and forestry workers dismantled their camp 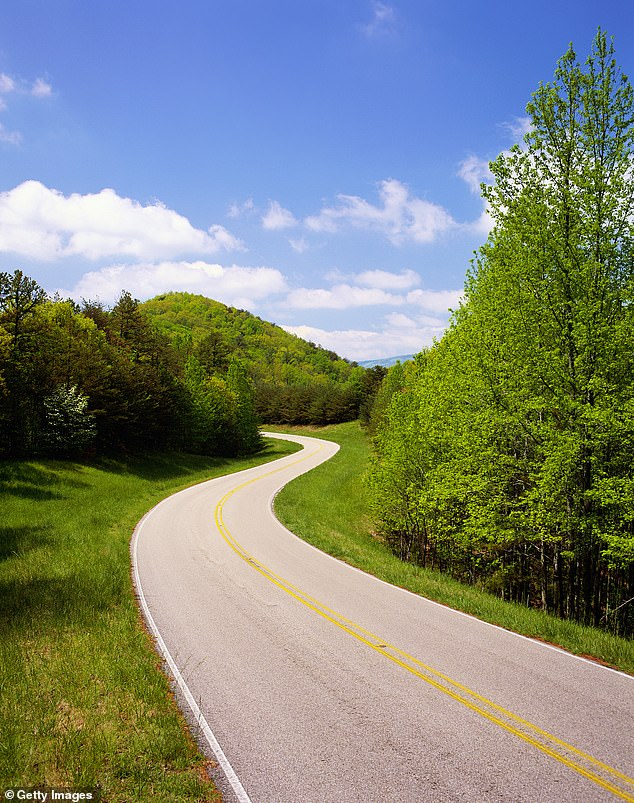 Hider and Pinkins were charged with murder, kidnapping, and robbery. A photo of Hider has not been released since she remains in the hospital

In awe of the support Paulus received, she said she was ‘happy Adam is getting recognized as the hero he was.’

The couple attended UCF together where Simjee received a degree in finance. Paulus said she mourns the plans the two had to carpool to school together this upcoming fall as they sought to receive a higher education.

Paulus plans to still attend UCF for a masters program in clinical counseling.

‘My relationship with Adam inspired me to become a marriage counselor because he had taught me everything I needed to know about a healthy relationship so that I could help others achieve the same thing,’ Paulus said.

A GoFundMe account that was set up to help Simjee’s family raise money for his funeral costs. Since the account raised more than $12,000 as of Thursday, a new goal of $30,000 has been issued to help pay for Paulus’ counseling and other expenses as she tries to move forward. 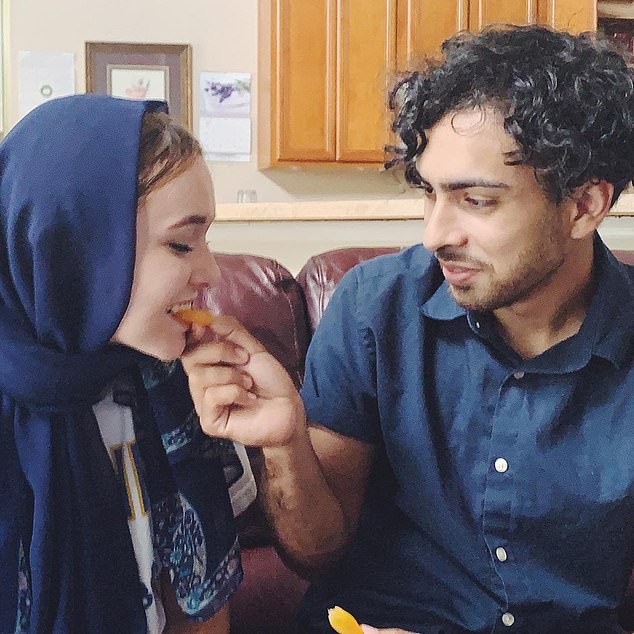 In a different tribute post to her boyfriend, Paulus said she was ‘happy adam is getting recognized as the hero he was’ 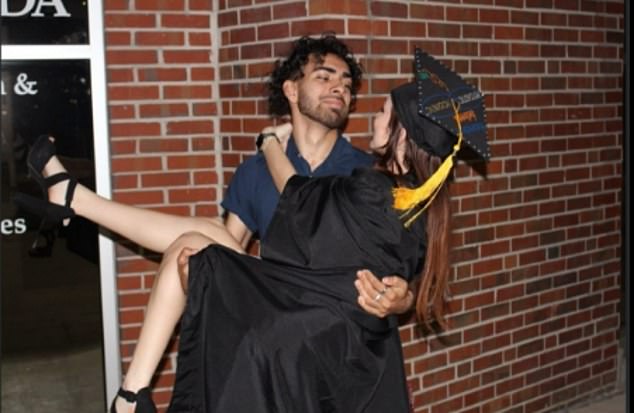 The couple attended UCF together where Simjee received a degree in finance. Paulus mourns the plans the two had to carpool to school together this upcoming fall as they sought to receive a higher education

Paulus announced Thursday on social media that she is no longer able to give further details about the case per a Clay County judge issuing an order.

Judge David F. Law approved a motion saying, ‘After hearing arguments from the state, this Court finds that there is a substantial probability of materials prejudice to the Defendant’s ability to receive a fair trial, should the parties be free to discuss without the limits the case in a setting where media coverage is likely and there are not any reasonable alternatives.’

Court records did not show whether Hider or Pinkins, who had an address in Memphis, Tennessee, had an attorney who could speak on their behalf.