A climate change protester had to be taken down by security today as he tried to rush a stage where Angela Merkel was inspecting a new electric vehicle at Frankfurt’s IAA car show.

Minutes earlier she had acknowledged that her government and the automotive industry faced a ‘Herculean task’ in meeting goals set to combat climate change in a speech at the annual event.

The German Chancellor had vowed to support the car industry through ‘revolutions’ in climate protection and digitalisation, but warned firms must themselves develop new technologies and win back lost trust among the public.

‘I believe it would be a mistake to think we could come up with state subsidy programmes that will match the innovations of the coming 10 years’ in reducing CO2 output, Merkel said.

During her tour of the new vehicles with show chiefs, a small group of demonstrators made their way inside to urge ‘climate protection instead of SUVs!’ while holding banners and placards. 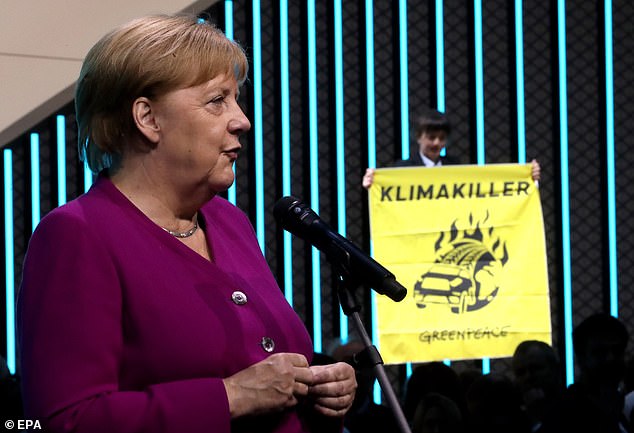 German Chancellor Angela Merkel’s appearance at the annual Frankfurt car show was interrupted by by Greenpeace protestors carrying signs that read ‘climate protection instead of SUVs!’ 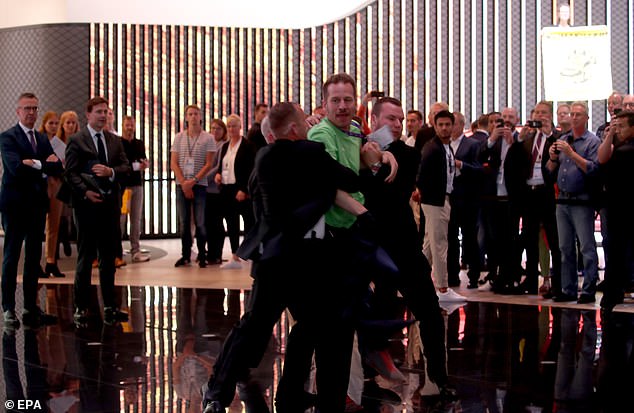 A protestor had to be restrained by security staff in front of an astonished Chancellor as he shouted inaudibly. The incident is a foreshadowing of larger protests planned for Saturday 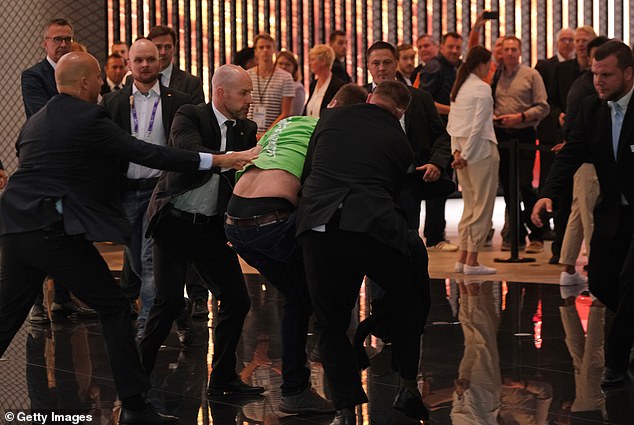 The trade fair opened under a cloud this year, with pressure from the lingering impact of Volkswagen’s massive ‘dieselgate’ pollution scandal, weaker international demand and a growing anti-car environmental movement

Mrs Merkel was sitting in an zero-emission electric Volkswagen ID.3 at the time.

And minutes later while standing in front of an electric-powered BMW iNext, another protestor has to be muscled outside in front of an astonished Chancellor.

The incident are a foreshadowing of a larger protest that Greenpeace has scheduled for Saturday.

The trade fair opened under a cloud this year, with pressure from the lingering impact of Volkswagen’s massive ‘dieselgate’ pollution scandal, weaker international demand and a growing anti-car environmental movement.

Speaking ahead of the show’s public opening, Merkel confronted industry leaders with a painful statistic: unlike other areas of the economy, emissions of greenhouse gases from Germany’s transport sector have remained unchanged since 1990 despite increasingly efficient vehicles.

‘Each time we got more efficient cars (…) the amount of traffic increased,’ Merkel said.

Environmental groups say the trend for bigger and more powerful cars, particularly SUVs, is eating up the fuel efficiency of recent decades. Greenpeace activists had unfurled large banners at the show branding the models on display ‘climate killers’. 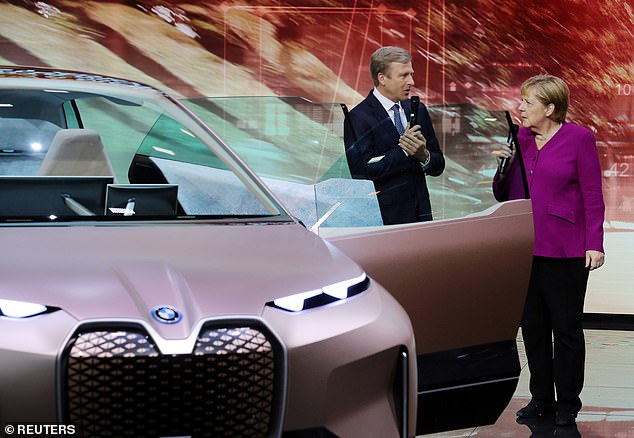 The incident happened while the German Chancellor was standing in front of an electric-powered BMW iNext. There were also a number of fossil fuel powered vehicles at the show 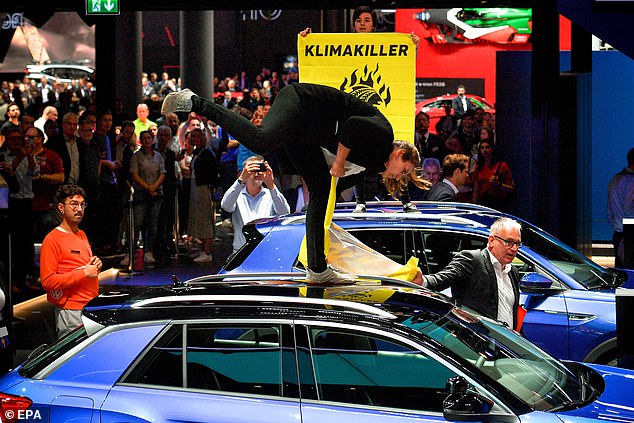 Even as it unveils a flurry of new electric models, the mighty German auto industry has been on the defensive in recent weeks and months over safety and the environment

Even as it unveils a flurry of new electric models, the mighty German auto industry has been on the defensive in recent weeks and months over safety and the environment.

Critics say the sector is failing to reduce carbon emissions despite a massive push for new electric vehicles.

Massive legal actions are still pending over Volkswagen’s admission in 2015 that it fooled regulatory tests on 11 million vehicles worldwide.

VW did not respond immediately to AFP’s request for comment, but the firm had earlier told SWR its EA 288 engines ‘contain no cycle recognition’ to adjust performance under test conditions.

‘The question of illegal defeat devices still weighs (on the car industry), and has led fundamentally to a loss of trust in the middle of a period of gigantic change,’ Merkel warned. 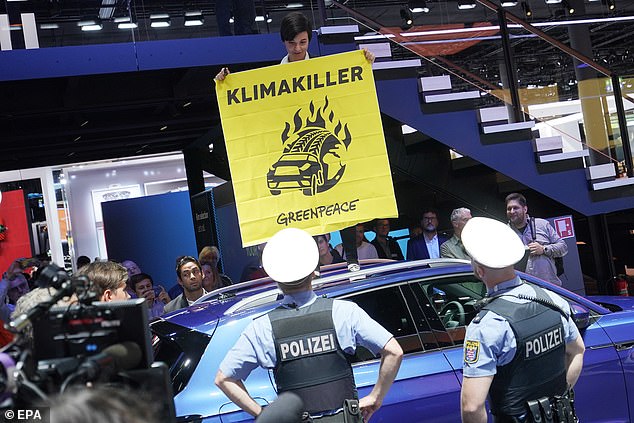 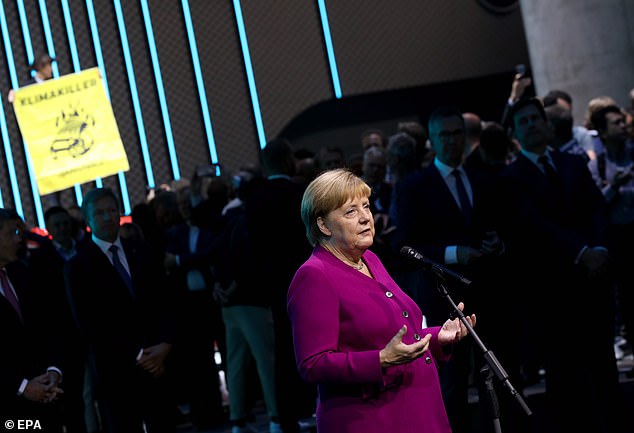 ‘Electric mobility will certainly be the alternative drive that we build out nationwide, along with charging infrastructure,’ Merkel assured IAA attendees, recalling also that Berlin is backing the creation of European battery manufacturers

She has had to battle allegations of cosiness with the auto industry since the dieselgate scandal broke, and has come especially under pressure as the ecologist Greens party snaps at her centre-right CDU’s heels in the polls.

Ministers plan to present a new climate package on September 20.

‘Very fundamental decisions’ are coming, Merkel said, repeating her Wednesday message to lawmakers that ‘putting a price on CO2 is the right way to make clear that all our innovation must aim at emitting less’.

From next year, vehicles must on average emit no more than 95 grams of CO2 per kilometre – on pain of a fine of €95 (£85) for each gram over the limit per car sold.

That has prompted manufacturers to unveil a string of new ‘zero emission’ electric vehicles, including Volkswagen’s ‘ID.3’ at the IAA.

Industry expert Stefan Bratzel nevertheless warned that ‘the success of e-mobility as it ramps up in the market has a lot of pre-conditions, and cannot only be achieved by manufacturers’ – highlighting the role of governments.

‘Electric mobility will certainly be the alternative drive that we build out nationwide, along with charging infrastructure,’ Merkel assured IAA attendees, recalling also that Berlin is backing the creation of European battery manufacturers.

But she added that alternative technologies like hydrogen power must not be ruled out, promising a strategy for the fuel later this year.

‘You still never know quite how revolutions are going to turn out, and that’s why we must organise them in as evolutionary a way as possible,’ she added.

There was no word in the chancellor’s 20-minute speech on the car topic that has dominated media this week: the deaths of four pedestrians, including a three-year-old boy, when an SUV mounted the pavement on a busy Berlin street Friday.

With demand for the bulky, high-margin vehicles growing, carmakers see them as a way to fund the costly investments needed to develop new technologies.

But the deadly accident shows ‘tank-like cars like this don’t belong in the city,’ said Greens mayor Stephan von Dassel after the crash in his Berlin-Mitte district.

SUVs are ‘a monstrous status symbol for some, and a monstrous image of the enemy for others,’ commented Die Welt newspaper.