The fearless women fighting for Ukraine against Russian-backed rebels

The librarian, the turncoat and the amputee chef: Pictures capture the fearless women who have put their lives on the line to defend Ukraine from pro-Russian separatists

The turncoat, the career soldier, the librarian, and the amputee chef – meet the women who have put their lives on the line to defend Ukraine from Russian-backed rebels.

Remarkable photos from Ukraine’s war-torn east show the faces of the fearless women who are willing to sacrifice their lives to keep ‘aggressors’ at bay.

The striking images include a former cook who lost her foot during a bombing raid, a prised Russian combat fighter who swapped sides, and a mother-of-three pictured beaming at the camera whilst cradling her assault rifle.

Conflict first arrived in Ukraine in 2014 following a revolution which toppled Moscow-backed President Viktor Yanukovych and saw the new government align itself with the European Union. 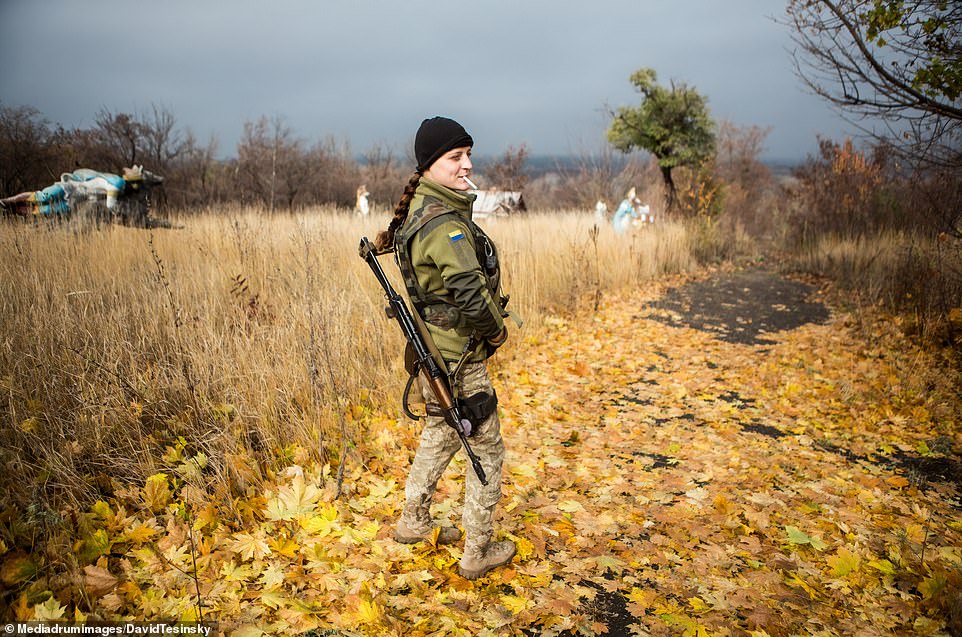 Yulia Tolopa, 22, is one of an estimated 10,000 women who have signed up to help Ukraine fight against Russian-backed rebels in the east of the country since conflict began there in 2014 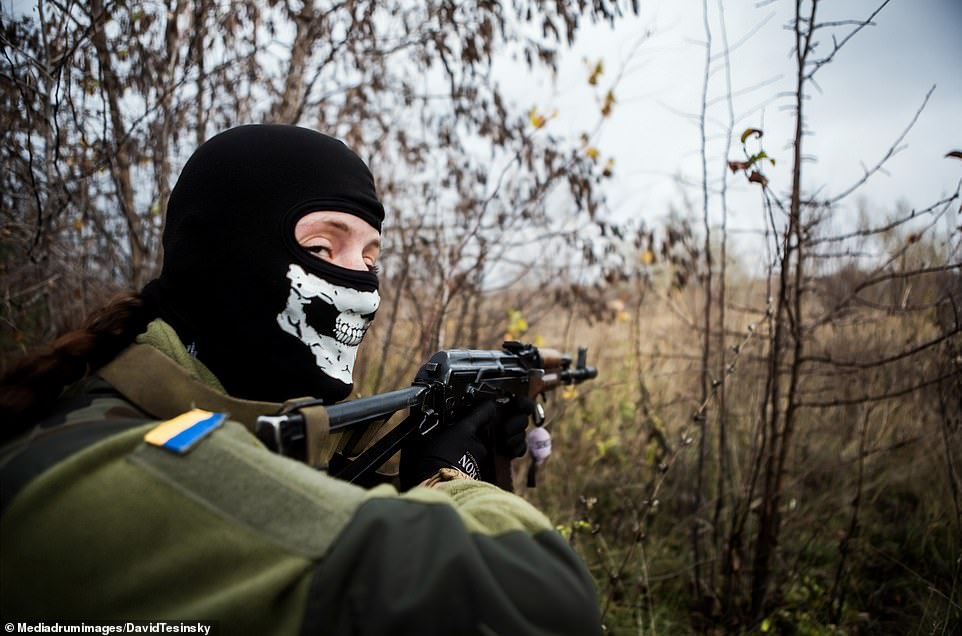 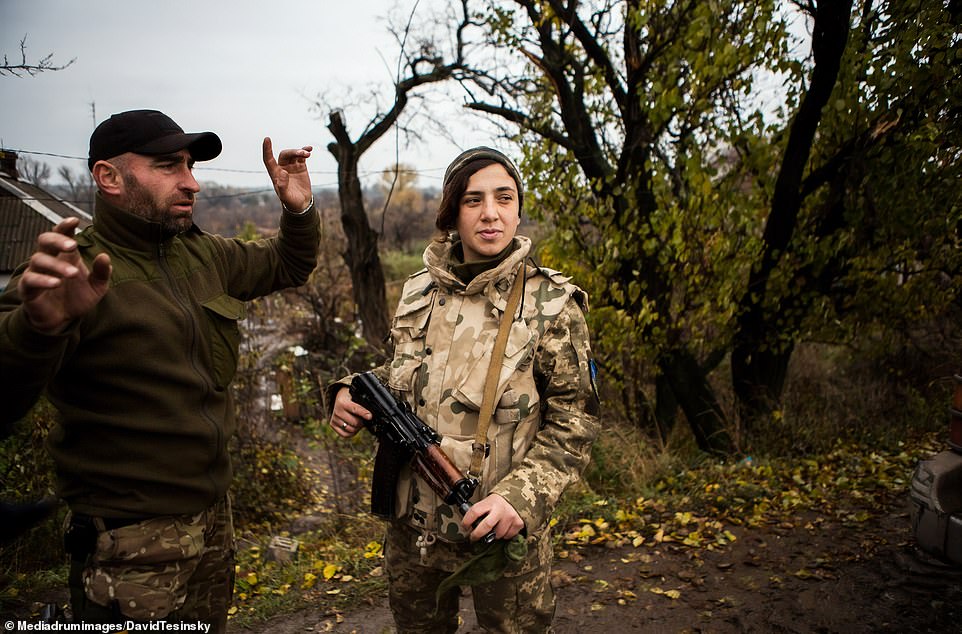 A woman who would give her name only as Nana, aged 30, is pictured above. She is from Georgia and has been fighting against Russia since her country was invaded in 2008. After war broke out in Ukraine, she came to fight here 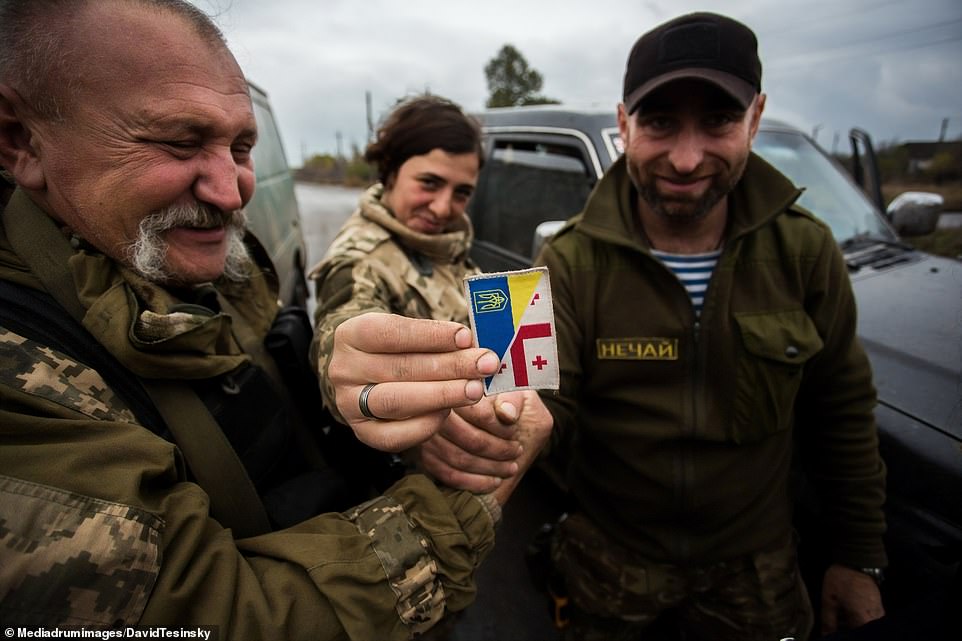 Nana’s comrades clasp hands above a combat patch that shows the Ukrainian flag split with the Georgian flag, the symbol of her home country, which she wears on her uniform 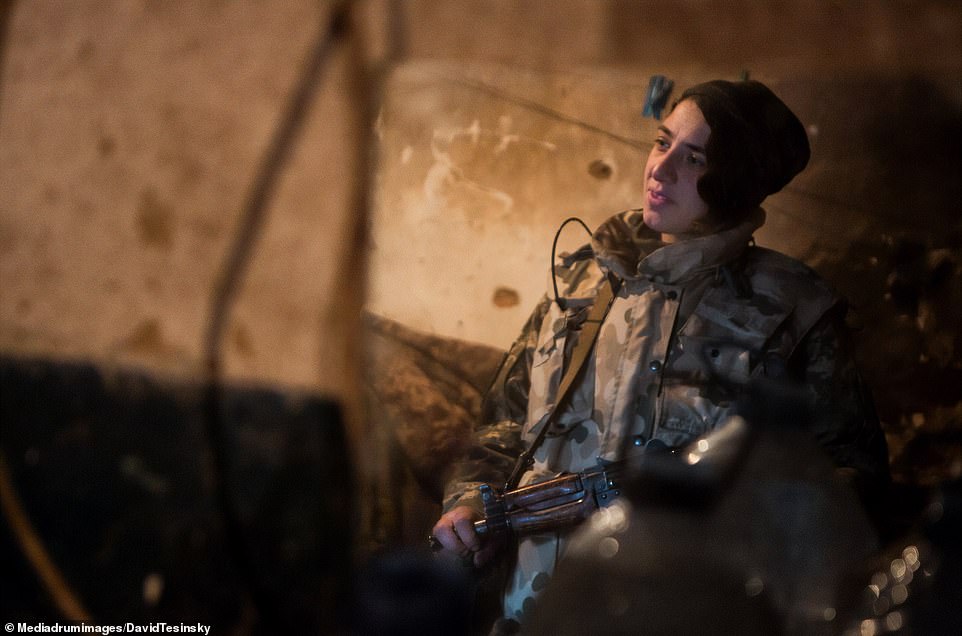 Nana is a married mother-of-three, but was mostly unwilling to discuss her life outside the military. She was photographed on the front lines by Czech photographer David Tesinsky 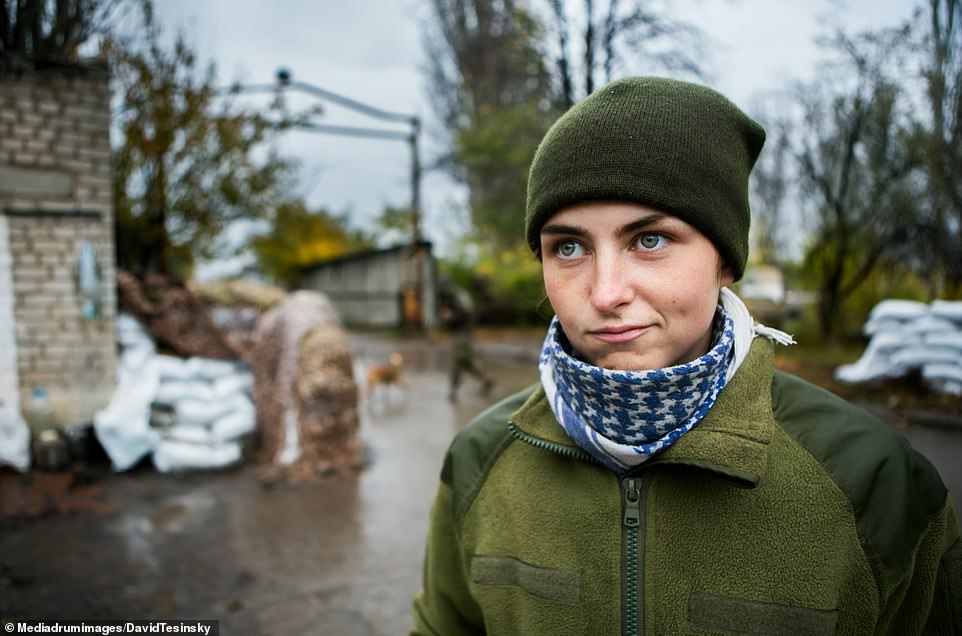 Yulia Mykytenko, 22, was not raised for a life of combat, and in fact worked as a librarian before signing up to fight because she wanted to defend her homeland and its ideals 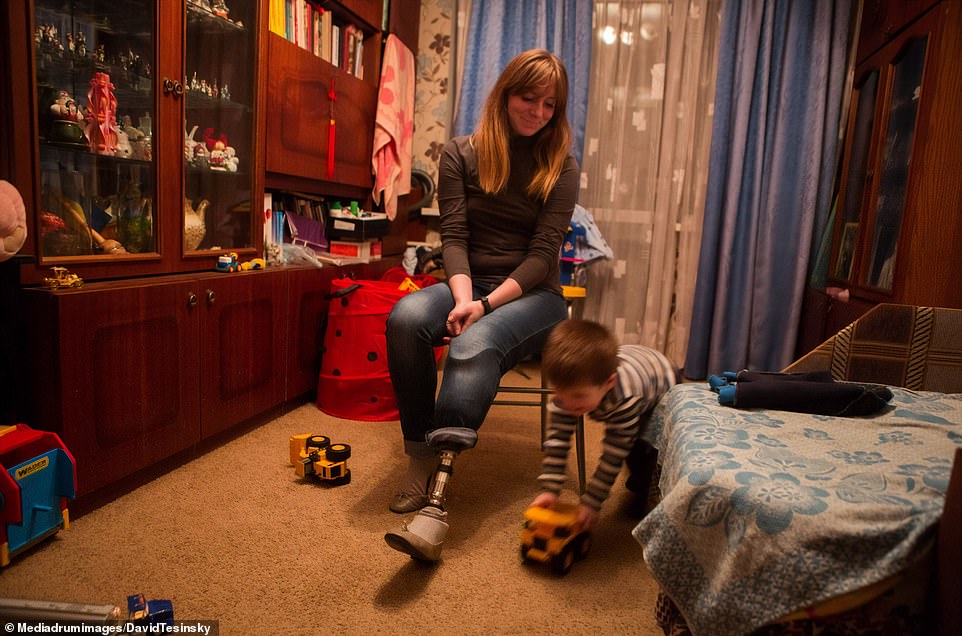 Olya Benda served as a cook in one of the military brigades before getting his during a Russian bombardment of the city of Avdeevka. Her wounds were so severe they had to amputate her leg

Putin, eager to secure one of Russia’s only cold-water ports in what was then Ukrainian Crimea, marched troops across the border and seized the peninsula, before fomenting a rebellion in ethnically Russian eastern provinces.

Despite the Minsk ceasefire agreement – a notional deal designed to end the war peacefully in 2015 – sporadic fighting continues, with the rattle of machine guns and crack of sniper fire now a part of everyday life.

As Ukraine tries to carve out a new identity for itself outside Moscow’s sphere of influence, over 10,000 women have signed up to help defend its borders.

Czech photographer David Tesinsky visited the war zone last year to meet the mothers, daughters and sisters risking life and limb for the cause.

‘Some of the women I met were only 22 years old, many of them had been fighting against Russia since they were 18,’ Tesinsky explained.

‘The tensions in the Donetsk and Luhansk region are very evident and there are regular shootings, even today.

‘I met some incredible soldiers, not least Yulia Tolopa. She’s 22 and has a daughter in Kiev. She’s actually a Russian national and has won a championship there in hand-to-hand combat.

‘She came to Ukraine when the ‘Revolution of Dignity’ began, because she did not believe Russian propaganda and wanted to see what was really going on for herself.

‘At the beginning of the war, she volunteered to the Ukrainian army’s Aidar battalion to help her Ukrainian friends who fight for freedom. She has fought in the hottest spots of the war and has been wounded twice. 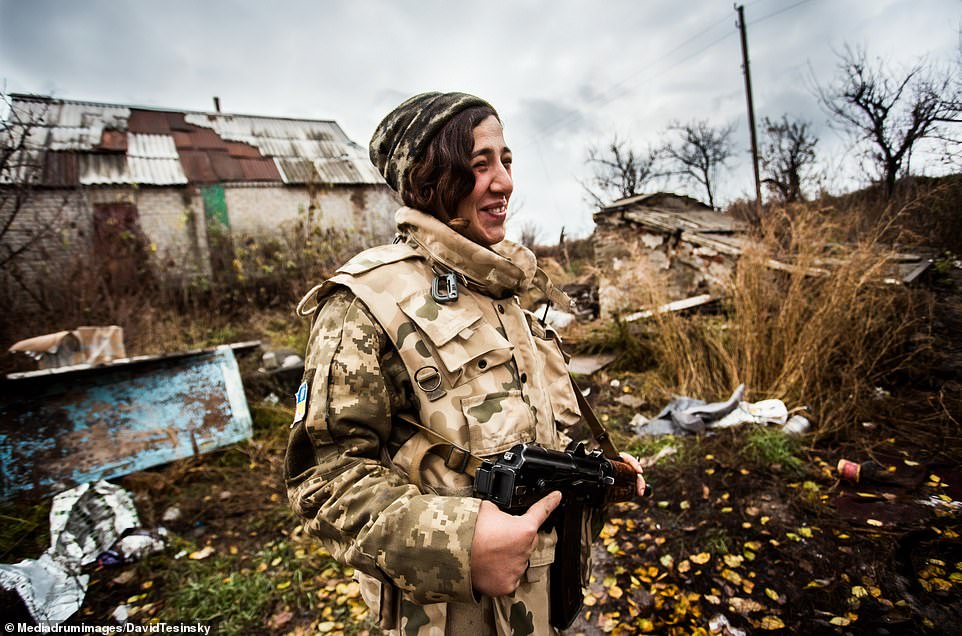 Nana has been a soldier all her adult life, and began fighting Russia in 2008 when the country invaded her homeland of Georgia. She then came to Ukraine in 2014 to help keep up the fight 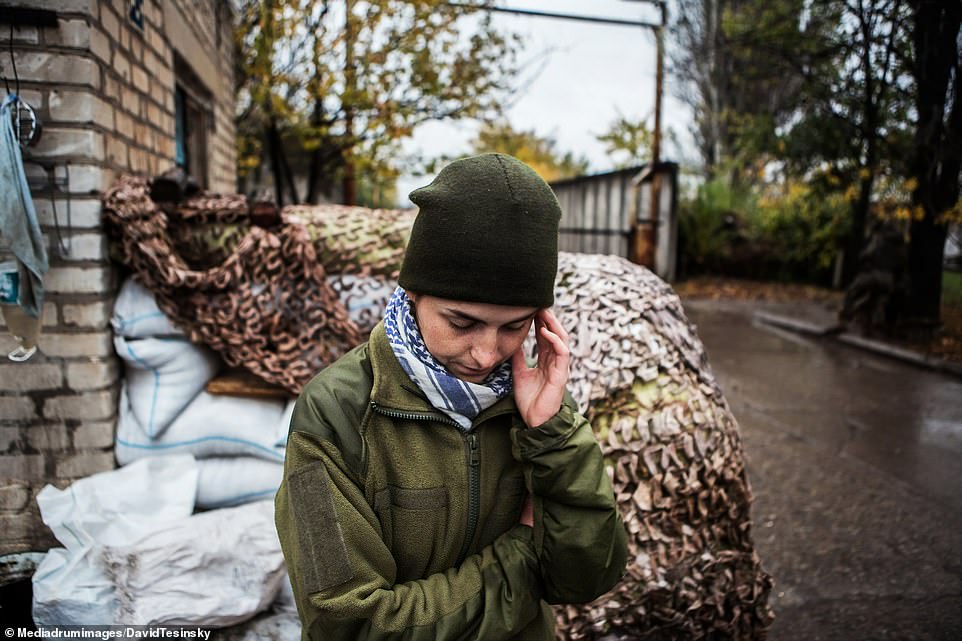 During her first combat mission, Mykytenko met the man who would become her husband. The pair have since had a child, though she decided to return to military service and continues fighting to this day 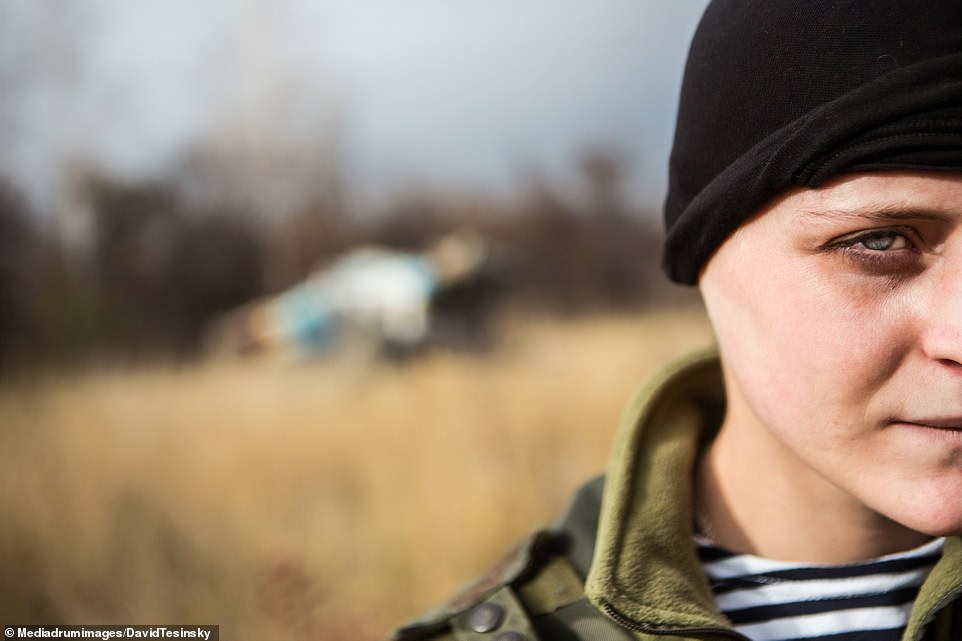 Tolopa’s betrayal of Russia has earned her a spot on the FSB’s most-wanted list. She has since lost all contact with her family and has started a new life in the Ukrainian capital of Kiev 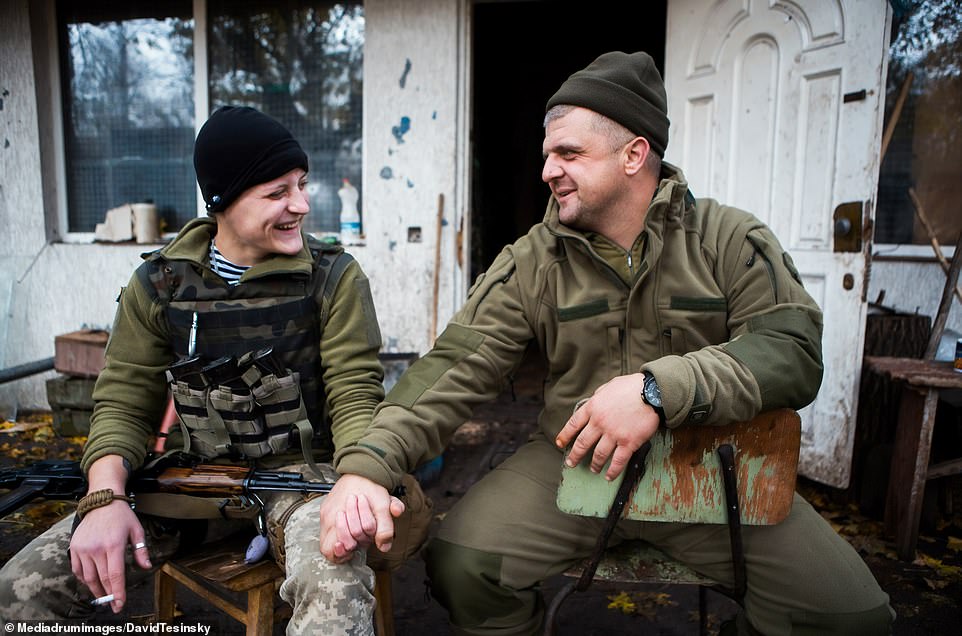 During the conflict, Yulia fought first as a part of a strike brigade, then as an aerial reconnaissance officer and was wounded twice. She also has a daughter, who lives in Kiev with friends 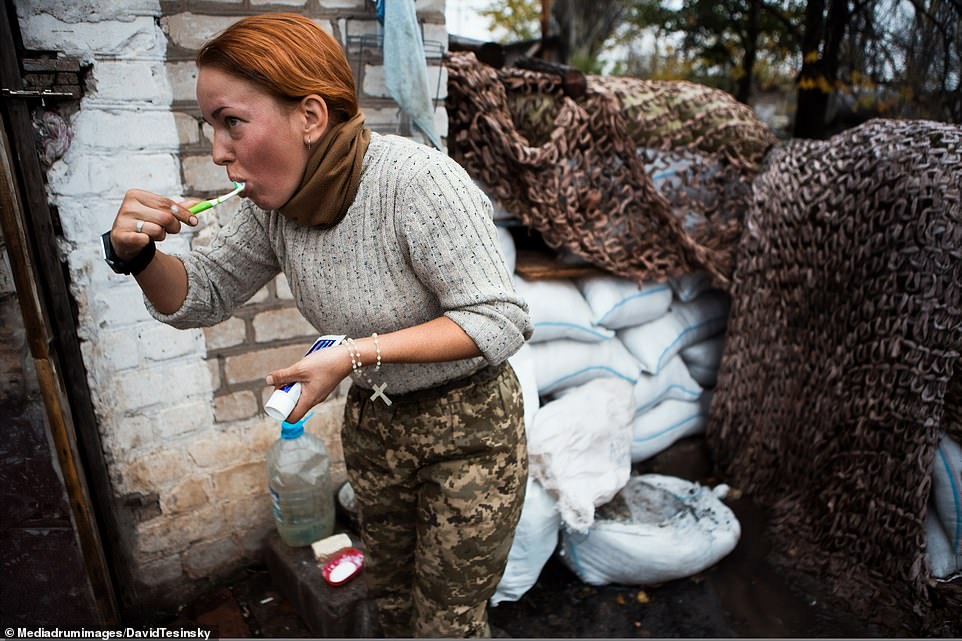 Despite having no military experience prior to joining the Ukrainian army, Mykytenko became the commander of a platoon aged just 21 and continues in the role to this day 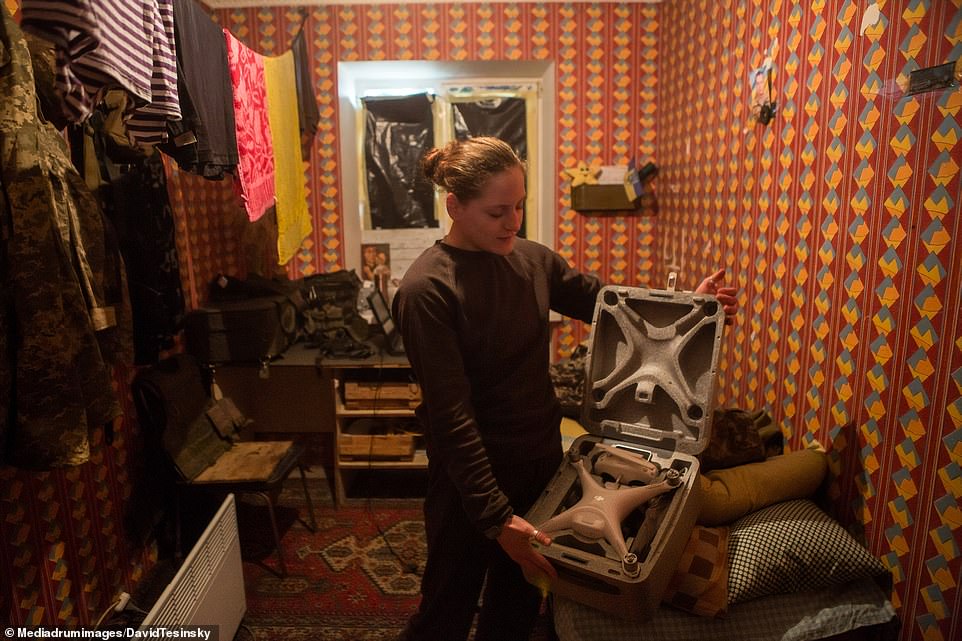 A female Ukrainian soldier shows off a drone inside a typical bunk room. The windows are typically blacked out to stop the interior lights being spotted by Russian forces at night

‘Because of her actions, Yulia is on the wanted list of the Federal Security Service of Russia (FSB), and has three criminal charges levelled against her.

‘Her decision to fight for Ukraine also cost her family. She has lost all contact with them.’

Not surprisingly, Yulia has decided to make a life in Ukraine and has applied for citizenship.

Tesinsky also photographed a woman known only as ‘Nana’, a married 30-year-old Georgian solider who has been fighting Russia since her homeland was embroiled with a war with the country in 2008.

‘Nana, who has three children, defends the integrity of Ukraine alongside her male colleagues,’ continued the photographer. ‘She performs combat missions and renders medical aid to the wounded.’

Meanwhile Yulia Mykytenko, 22, was a librarian before deciding to sign up to fight for Ukraine, and is now a platoon commander. During her first mission she met her now-husband.

‘After marriage, she continued her military service to protect her homeland fighting alongside her husband,’ Tesinsky explained.

‘Due to her personal qualities, courage and professionalism, Yulia became the platoon commander of the reconnaissance platoon when she was just 21 years old.’

Underlining the danger that the women face is Olya Benda, who lost her foot during a Russian bombardment in the city of Avdeevka.

Benda was a cook in one of the brigades before she was hit, but afterwards was too badly wounded to stay on the front lines and decided to return to civilian life.

She found a partner, who she married, and the pair now have a son together. 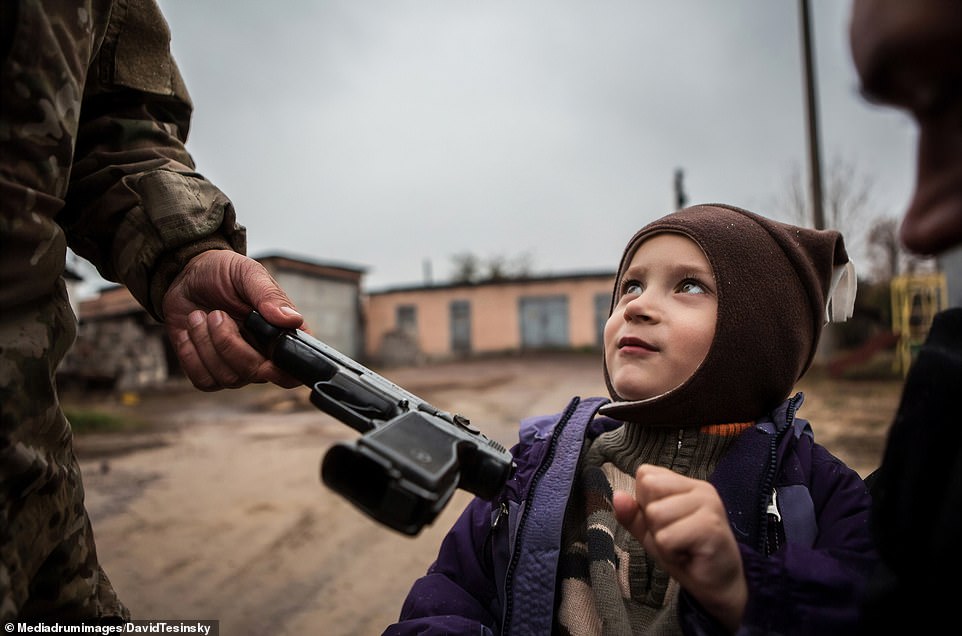 A Ukrainian solider shows off his sidearm to a child living amid the war zone that has become the country’s east. Sporadic fighting has wracked the towns and cities here since 2014 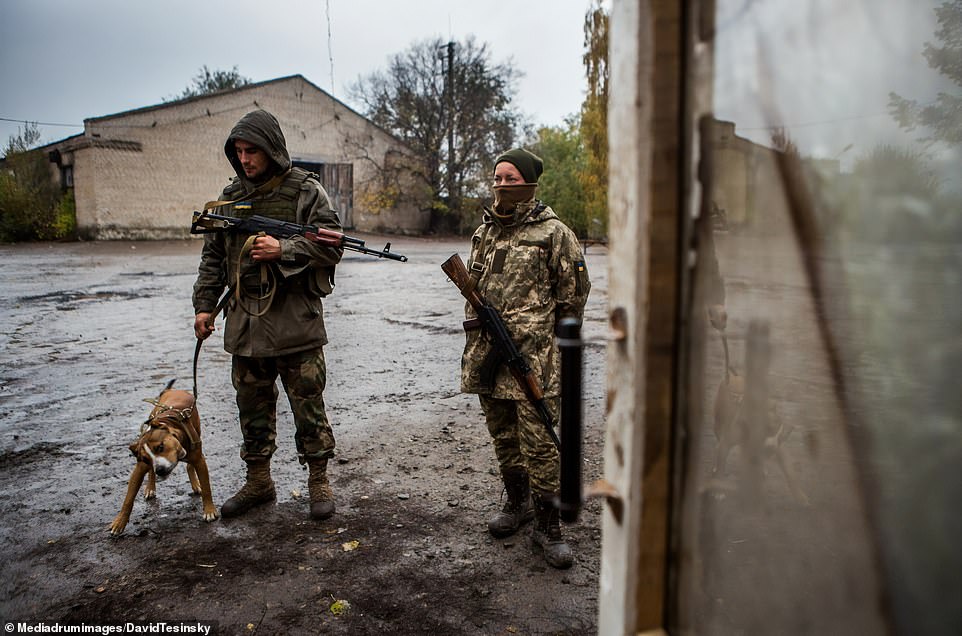 More than 13,000 people have died as a result of the clashes between Ukrainian and pro-Russian forces, including almost 300 people killed when Malaysian Airlines flight MH17 was accidentally shot down by a Russian anti-aircraft weapon 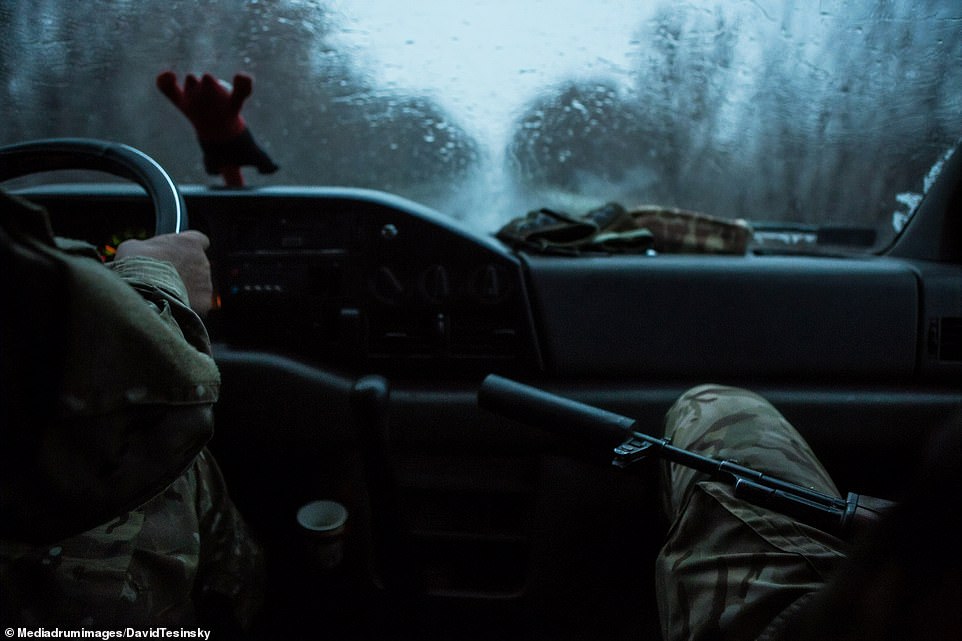 One Ukrainian soldier drives along the front lines while another holds a silenced AK rifle on their lap, somewhere in the country’s east, amid sporadic fighting with pro-Russian forces