The four stunning celebrity weddings that happened this weekend

Four weddings and a baby! From an English wood to a French chateau, a confetti-strewn weekend shows that celebrities still believe in happy endings 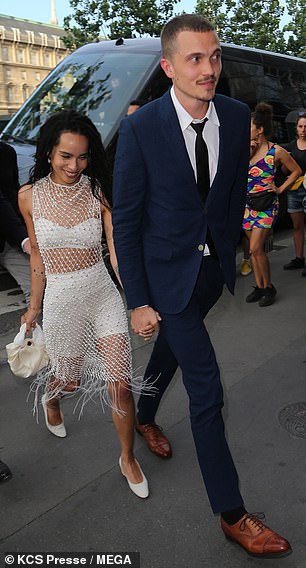 Four weddings in a weekend may sound like an entry in Guinness World Records, but over a sunny 48 hours this weekend there were four high-profile showbiz nuptials.

There were A-list guests aplenty, a rented chateau and a panoply of security guards to keep the rubberneckers at bay. The ritziest guests were celebrating with actress Zoe Kravitz, whose rocker dad Lenny threw a lavish bash at his Parisian mansion.

Elsewhere in France, Game Of Thrones star Sophie Turner wed pop star Joe Jonas at a chateau in Provence — their second nuptials after eloping to Las Vegas in May.

And in the English countryside, The Body Coach Joe Wicks and his model girlfriend Rosie Jones, enjoyed an idyllic woodland ceremony with not a broccoli tree in sight.

ALISON BOSHOFF reports on a starry weekend of weddings.

Their love story: Started dating in September 2016 after being introduced in a bar by mutual friends. She said: ‘I love that it wasn’t on an app and that it wasn’t on a movie set. My friend knew that I wanted to meet someone — not even to get serious, to be honest with you — and he brought Karl. I instantly felt something.’ 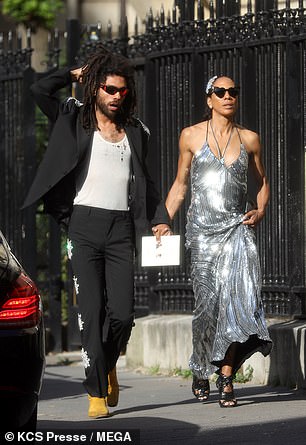 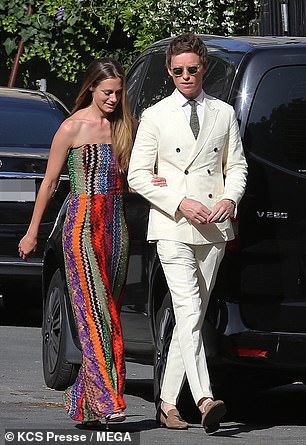 Father of the bride Lenny Kravitz arrives with his date for the special occasion. Eddie Redmayne and his wife, Hannah Bagshawe were also invited to the wedding 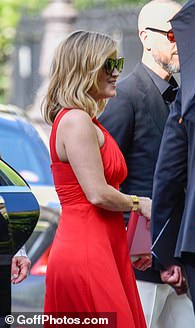 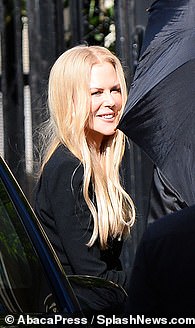 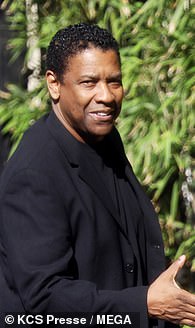 On Friday, the couple had a rehearsal dinner that was ‘a tremendously joyous party’, according to Restaurant Laperouse co-owner Gregory Lentz, who said: ‘There was so much love in the room. There were toasts and they were moving into tequila when I left. They were still going at 2am.’

And another thing: Zoe’s mum, Lisa, 51, is married to Aquaman dreamboat Jason Momoa, 39, and she has two half-siblings, Lola Iolani Momoa, 12, and Nakoa-Wolf Manakauapo Namakaeha Momoa, ten, from their union.

The bride and groom: The Body Coach Joe Wicks, 32, and his glamour model girlfriend Rosie Jones, 28.

Their love story: The couple started dating in September 2016, and soon after welcoming their baby daughter, Indie last August, wellness guru Joe announced that they were engaged.

He said: ‘My mum and dad never got married when I was growing up, and they spent my whole life separating and getting back together. I always thought I didn’t believe in marriage. 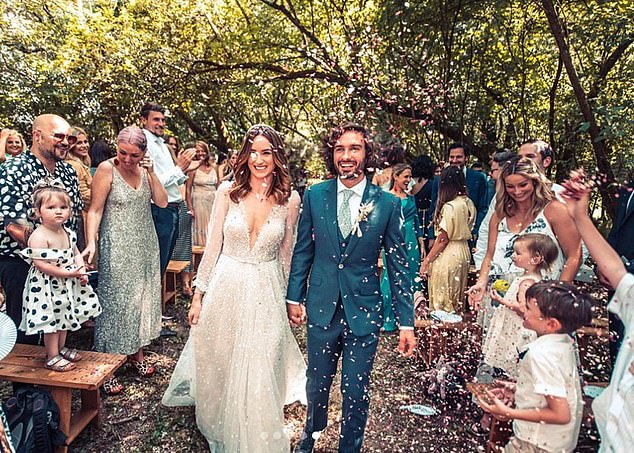 Body Coach Joe Wicks, 32, and his glamour model girlfriend Rosie Jones, 28, posted this photo of their charming woodland ceremony that was followed by a reception in a flower-decked barn with funfair rides 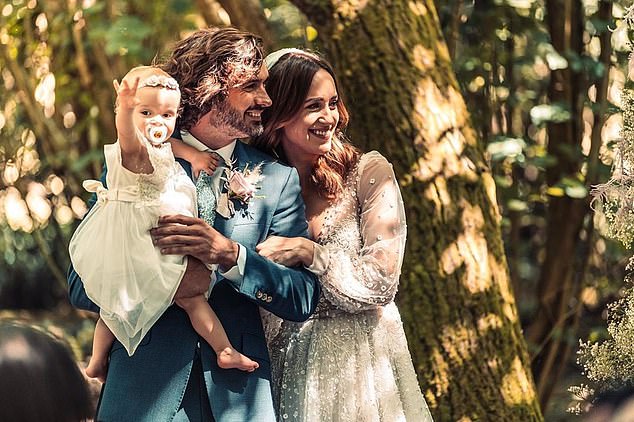 The couple started dating in September 2016, and soon after welcoming their baby daughter Indie last August they announced that they had engaged

‘But I now know what it means to want to stick together, and to love someone enough to want to marry them. It’s my goal in life to be committed and loyal to Rosie and Indie, and always be there for them.’

The wedding: A woodland ceremony (above) followed by a reception in a flower-decked barn with funfair rides including a Ferris wheel and carousel. The bride wore a plunging crystal-encrusted gown and flower crown, the groom a bespoke blue suit.

And another thing: What did they eat? Not diet food! There was truffled Mac and cheese, Thai calamari, chicken satay, Italian ice-cream, a G&T bar and pizzas from a van to satisfy any late-night munchies.

Their love story: They met in 2006 when McPhee was a contestant on Idol and he was her singing coach, and later produced her debut single. They only started dating in the summer of 2017 — just after Foster had been entertaining Liz Hurley on holiday in Europe.

His daughter, Erin, said of Katharine: ‘I really like her. My dad is kind of a hopeless romantic and Katharine’s awesome. We’ve known her for a really long time. And if he’s happy, we’re happy.’ 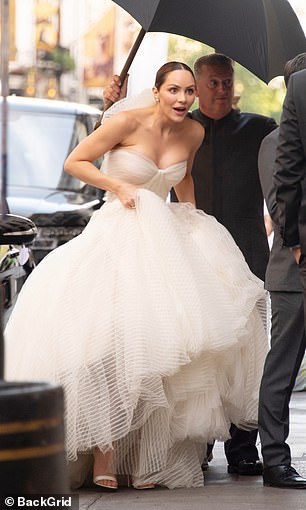 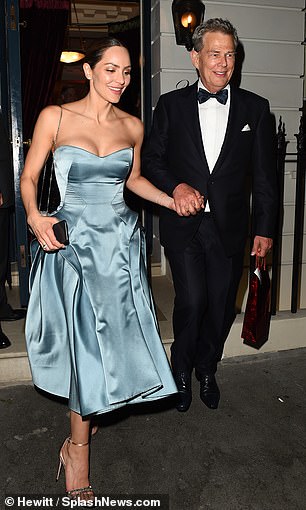 The wedding: An intimate ceremony at the Church of St Yeghiche in South Kensington, London, followed by a reception at the Oswald’s Club in swanky Mayfair.

Katharine wore a strapless white Zac Posen gown (left). Hours before the ceremony on Friday, she posted a clip of herself having a beauty treatment, and wrote: ‘The secret to a calm and collected bride. And maybe a little Xanax.’

Celebrity guests: Tennis ace Roger Federer and his wife, Mirka, were the guests of honour.

And another thing: Between 2008 and 2016, Katharine was married to her former manager, Nick Cokas. Her new husband David Foster was a guest at their wedding. 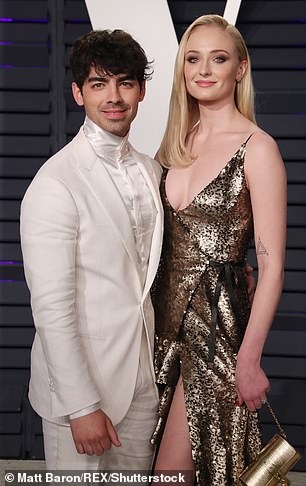 The bride and groom: Game Of Thrones star Sophie Turner, 23, and American pop singer Joe Jonas, 29 (right). Turner played Sansa Stark in the series from the age of 14. She was raised in Leamington Spa, Warwickshire.

Their love story: The couple started dating in 2016 after meeting at the MTV Awards and announced their engagement the following year. They were married by an Elvis impersonator at the Little White Chapel on the Las Vegas Strip in May.

The wedding: An enormous white marquee was put up in the grounds of the Chateau du Martinet, near Avignon in the South of France. The bride wore a traditional white gown with long train and veil, and Joe Jonas wore an all-black tux. For their rehearsal dinner, the couple wore co-ordinating red outfits with their guests all in white.

And another thing: The couple split up 24 hours before their first wedding. Sophie said: ‘For a second we both had cold feet. It was the worst day of our lives.’