Last weekend, The Sunday Age reported the full extent of losses from poker machines in this state. It is a startling, shocking, even appalling, tale.

Over the 30 years since pokies were introduced, Victorians have collectively lost $66 billion on them. Yet despite the clearly established link between this staggering sum and suicides, bankruptcies and family violence, nothing ever changes.

Why? One reason was explained a little deeper in the revealing piece. The Australian Hotels Association, the lobby group representing the mainly suburban and regional venues where pokies wreak so much of their social and familial carnage, donated $781,000 to the Andrews government’s re-election effort in 2018. The association continues to push the interests of its members in promoting pokies venues despite the unarguable evidence that gambling has become the single greatest cause of social and economic harm in our community. Yet nothing ever changes. 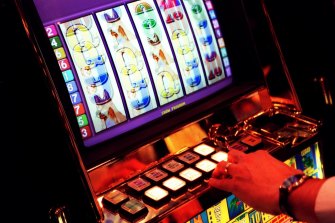 Gambling causes many social harms but few politicians are willing to try to bring the industry to heel. Credit:Virginia Star

There is a conveyor belt running from pokies to prison, as any visit to Melbourne Magistrates’ Court will attest. Every family violence worker will provide stark testimony of the major contribution pokies make to their workload. Any drug or alcohol therapist, any mental health worker, any suicide counsellor will confirm the wreckage left by gambling addiction. Any bank can attest to the stream of businesses crippled by the fraud of once-trusted staff who succumbed to gambling.Yet nothing ever changes.

Australians love to gamble. On average, we each lose $1000 every year. For many of us, an occasional flutter is harmless fun, but for others it is addictive. Somewhere on the scale between the fun and the addiction is a substantial coterie for whom it may be short of ruinous but a dead weight on their prosperity and happiness. Yet nothing ever changes.

Whenever challenged, the industry wheels out a smooth talking “ambassador”, often a retired politician or a sports star, paid a fortune to leverage their reputation by spouting implausibly sincere concerns about problem gambling. They rattle off the same platitudes and mutter about “further consultation with stakeholders”. But nothing ever changes.

It is absurd and disingenuous for an industry that reaps massive rewards from the pockets of some of the most vulnerable in our state to fight every measure proposed to reign in their excess. If they really believe their own spin on responsible gambling, they would simply adopt the long-standing advice of the financial counsellors who try to clean up their mess and embrace genuine reform. They do not – so nothing ever changes.

It is not just pokies that are ripping the economic guts out of our communities. It is impossible to watch AFL, cricket, soccer, tennis or any other sporting contest without being bombarded with nauseating ads enticing us to tap on our phone to throw away more money. Using every trick in the psychology playbook, the betting companies equate mateship with gambling, as if it is somehow a betrayal of our national ethos not to lose money. Major sporting codes and some clubs depend on lucrative sponsorships to bankroll success on the field. Gambling ads provide significant revenue for television networks. Broadcasters sprinkle gambling references into their commentary as if the two are inseparable. Complaints are brushed aside. Nothing ever changes.

Every now and again, someone makes a fuss in parliament and the industry tosses out a sacrificial bone. A minor regulation is tweaked, something peripheral is agreed to, but in this COVID-ravaged budget environment, Treasury will be deeply reluctant to interrupt the revenue stream from gambling – so nothing ever changes.

Online wagering and mobile phone apps – mostly owned by offshore tax haven-based monoliths – mean the sad procession at the local TAB is but a dim memory. Instead, more than what was ever transacted within that grungy decor is available in your pocket on a phone. Have additional safeguards been forced onto the industry to counter the heightened risk? Hardly at all despite the warnings. Nothing ever changes.

But within the emergence of new technology are the seeds for genuine, lasting and highly effective reform. The well-established rules of the law of negligence need to be readily applied to the gambling giants. Here is how it could change.

Gambling providers undoubtedly owe a duty of care to their customers. That duty is breached if the company knows gambling is causing harm and they do not take steps to prevent it. By way of a parallel example: no business can keep selling an unsafe product if they know it is defective. Apply the same principal to gambling. Watch what changes.

The tables can be turned. The gaming companies themselves compile and collate the very data needed to stop people entering into the danger zone of problematic behaviour. Every transaction is retained in their system. It is currently deployed to encourage customers to gamble more. Instead, the gaming companies must be compelled to use the same information to identify customers who are in too deep.

As we prepare for a state election, those concerned about the runaway train that is gambling need to push for amendments to the gambling-control laws. For online wagering, our parliament must specify the extent to which a duty of care is owed to customers. For suburban and regional pokies venues, we need fewer machines in a reduced number of smaller venues, with tighter controls.

Premier Dan Andrews rightfully views his government as the most progressive in the nation. What are the odds he will embrace this chance to change?