Bard news for Shakespeare-lovers! London’s Globe Theatre is slammed over its ‘woke’ audience trigger warnings for playwright’s classic Julius Caesar – including cautions over the use of ‘stage blood and knives’

The Roman dictator was famously stabbed to death inside the halls of Rome’s senate which is a scene that features in the modern production of Shakespeare’s classic.

But the Globe – which is on the site of the Bard’s original playhouse – alerts the audience before performances that the show will contain ‘stage blood and weapons including knives.’

Shakespeare’s play was first performed in the 16th century, but the modern day interpretation includes ‘content guidance’ for those in attendance, reports The Sun.

They are warned: ‘Content guidance: Depictions of war, self-harm and suicide, stage blood and weapons including knives.’

The theatre describes the critically-acclaimed play, which will run from July to September this year: ‘Conspiracy to kill, public broadcast of cunning rhetoric, a divisive fight for Greatness. Ancient Rome has never felt closer to home.

‘When Cassius and Brutus decide Rome’s leader Julius Caesar poses a political threat to their beloved country, there’s only one solution.’

Ticket prices range from £25 to £62 for the production, according to the Globe’s official website. 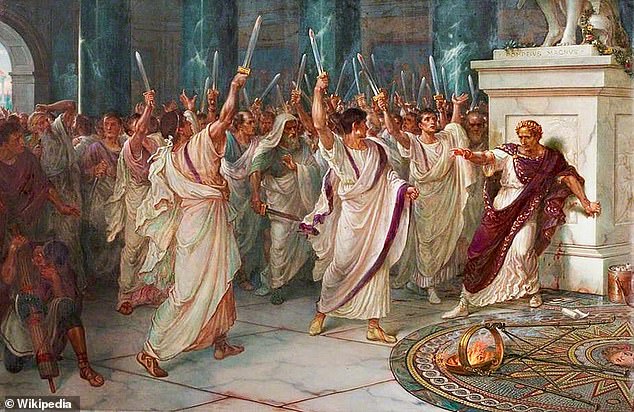 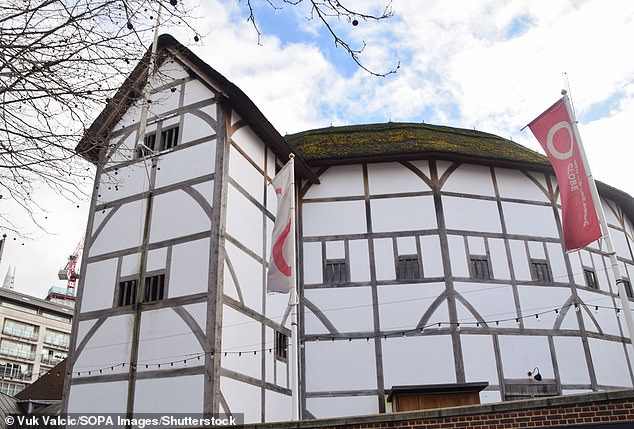 It comes less than a year after the Globe’s bosses came under fire for giving audience members trigger warnings about ‘upsetting’ themes in Shakespeare’s Romeo and Juliet – and providing a number for the Samaritans for after the show.

The play, written by Shakespeare in the late 16th Century, tells the story of lovers whose desire to transcend the rivalries of their families fails when Romeo kills himself after wrongly believing Juliet is dead.

On its website, the Globe warned: ‘This production contains depictions of suicide, moments of violence and references to drug use. It contains gunshot sound effects and the use of stage blood.

‘If you have been affected by any of the issues raised in this production of Romeo and Juliet please find details below of organisations offering advice and support.’

Former minister Ann Widdecombe said: ‘You don’t go to see Romeo and Juliet if you want a light-hearted evening.’

Actor Christopher Biggins added : ‘Do we have to have signs for everything under the sun. It’s a joke. What they are trying to do is insulting to the mentality of theatre-goers.’

It comes as Britain’s ‘strictest headmistress’ fears pupils will stop studying William Shakespeare as schools are forced to diversify the curriculum.

Katharine Birbalsingh, headteacher at Michaela community school in north London and the Government’s Social Mobility Commissioner, stressed the importance of keeping ‘dead white men’ on the curriculum as ‘black and female authors’ are added.

She explained Shakespearean texts had been ‘lost’ in many places in the US and warned the UK may follow suit.

GCSE pupils in England are still required to study Shakespeare, despite reading lists having been broadened to include more writers from minority backgrounds.

Pupils entered for AQA GCSE English literature exams this summer are required to have studied Macbeth, Romeo and Juliet, The Tempest, The Merchant Of Venice, Much Ado About Nothing or Julius Caesar.

Miss Birbalsingh told The Guardian: ‘I think that dead white men have something to offer us. Shakespeare has been influencing literature for over 400 years. It’s right to teach Shakespeare.

‘The ideas in Shakespeare are universal. I’m worried about the trend in America that is now influencing what’s happening over here, where eventually we will do away with cultural icons like Shakespeare.’

She added that ‘any number’ of black and female authors could replace Shakespeare in schools.

William Shakespeare: The playwright, poet and actor whose reputation transcends all other writers

William Shakespeare (baptised April 26, 1564 – died April 23, 1616) was an English playwright, poet, and actor who is widely believed to have been the greatest dramatist of all time.

The playwright continues to occupy a position unique in world literature as someone whose reputation transcends that of all other popular writers.

He is credited with producing 39 plays, 154 sonnets and three long poems.

His plays, the most famous of which include Romeo and Juliet, Hamlet and Othello, have been translated into every major language.

They are performed thousands of times a year by actors all across the world and are studied by millions of students across the UK and elsewhere.

William Shakespeare (baptised April 26, 1564 – died April 23, 1616) was an English playwright, poet, and actor who is widely believed to have been the greatest dramatist of all time

Shakespeare was born and raised in Stratford-upon-Avon, Warwickshire.

He married Anne Hathaway at the age of 18 and had three children with her: Susanna and twins Hamnet and Judith.

At some point between 1585 and 1592, Shakespeare began a career in London as an actor and writer.

He was the part owner of a playing company called the Lord Chamberlain’s Men, who later became known as the King’s Men.

They built the Globe Theatre, in Southwark, South London, at which they performed many of Shakespeare’s plays.

The theatre was destroyed by fire in 1613 but rebuilt the following year before being closed in 1642 and then pulled down.

A modern reconstruction of the Globe, named ‘Shakespeare’s Globe’, was built less than 800 feet from the site of the original theatre and opened in 1997.

At the age of 49, Shakespeare is believed to have retired back to Stratford, before he died three years later.

However, there are scant records of his private life and considerable speculation continues about his exact physical appearance.

Some questions have also been raised about whether all the works attributed to him were in fact written by others.