Pictured: Rolex Rippers in action as the female gang target wealthy WOMEN for the first time to steal their cash, purses and jewellery

The renowned Rolex Rippers – who are known for robbing wealthy gentlemen for their designer watchers – are back in action, but this time they are targeting elderly women.

The group of female criminals have spent the past 18 months posing as charity workers to lure in male victims before discreetly removing their Rolex watches from their wrists.

But now the gang are believed to be using the same trick to target women in well-to-do market towns, stealing their wallets, purses and jewellery.

Over the past two months, a spate of alarmingly similar incidents have been reported to police, of female robbers stealing from older women outside banks, supermarkets and high streets across Dorset and Hampshire.

The pair of women, one younger than the other, are said to approach their vulnerable targets with clipboards – claiming to work for a deaf charity.

Police have now released photos showing two members of the notorious gang stealing a £1,000 in cash out of an elderly woman’s bag, while posing as ‘charity workers’. 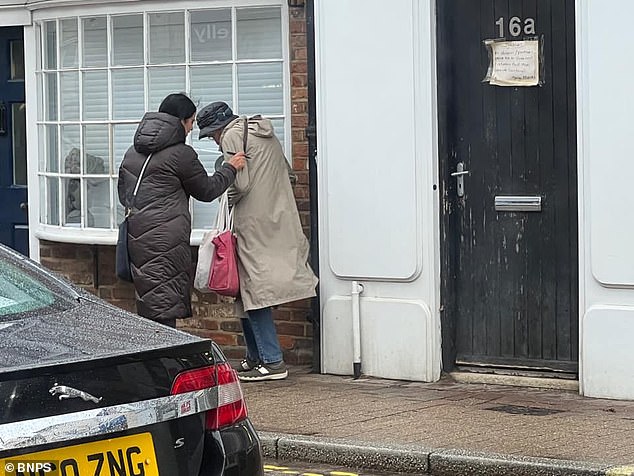 The woman supposedly collecting a donation from another woman on Ringwood High Street on October 5. She was later seen attempting to steal an elderly man’s wallet 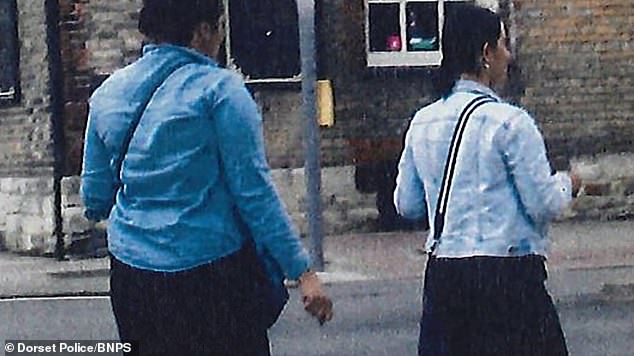 Dorset Police have released footage of two members of the Rolex Rippers supposedly collecting a £5 donation from an elderly woman while the other stole £1,000, which she had just withdrawn, from her handbag

Most recently, the female ‘charity workers’ stopped a woman in Ringwood High Street, before taking a ‘donation’ from her.

Seconds later they handed it over to a male accomplice who was standing nearby.

Karen Whitcher, who had been watching the incident nearby, attempted to stop the pair after she saw one of them slip her hand into an elderly man’s coat pocket.

Ms Whitcher photographed the robbers in action before they attacked her and made a ‘swift exit’ as they attempted to cover their faces with their coat hoods. 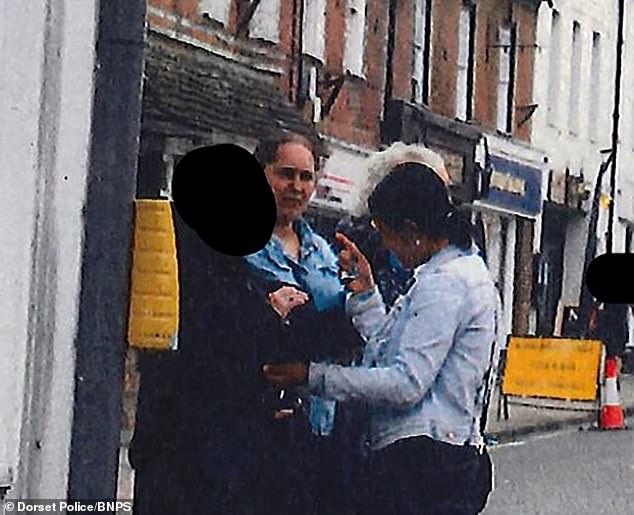 Dorset Police have released photos of two women supposedly collecting a £5 donation from an elderly woman while stealing £1,000 from the woman’s bag which she had just withdrawn 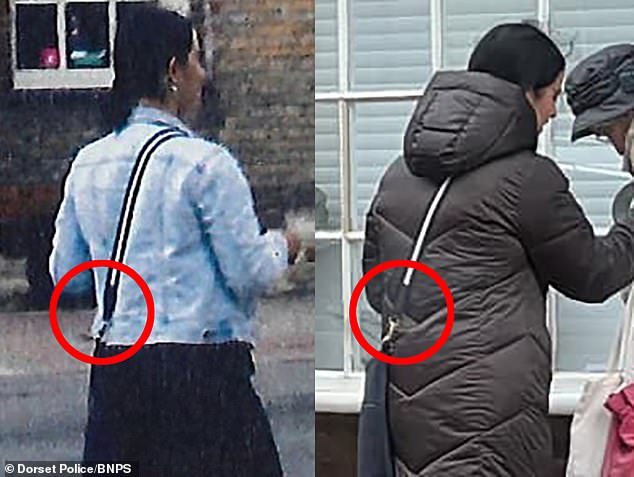 A side-by-side comparison of the woman wanted by Dorset Police. The left photo was taken after she stole a £1,000 off a victim in Wareham and on the right she is seen posing as a charity worker, accosting a victim in Ringwood 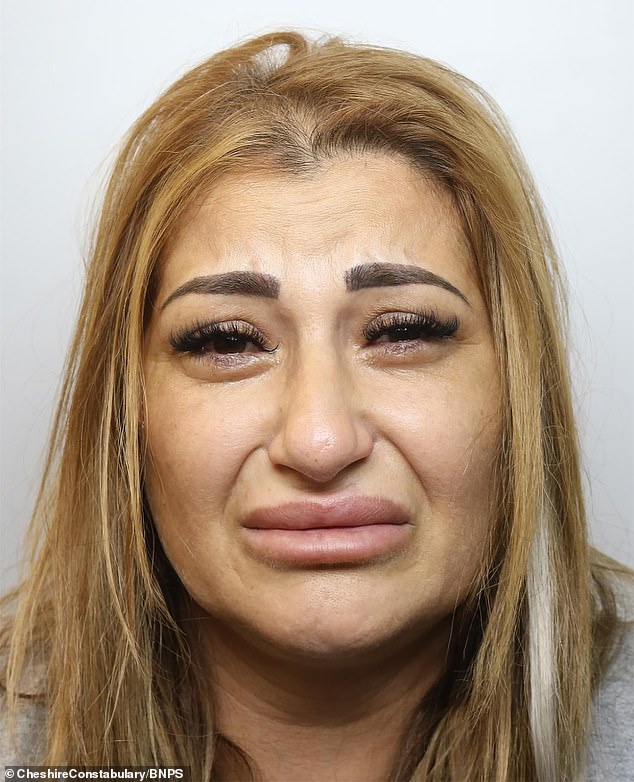 Multiple police forces are working to track down the criminals but so far only one woman has been caught. In July, Stefania Tinica, a Romanian national, was jailed for a theft at a golf club in Cheshire last year

He said: ‘The two ladies were opposite the road from one another.

‘I saw the younger woman approach an old lady and hang around her neck. She took the money and put it in her pocket. It all happened so quickly.

‘I thought, ‘this isn’t right’. It’s dodgy to stop a vulnerable person and ask for money.

‘She met up with the older lady and a guy in his 60s wearing a cap. He collected the money off them.’

In the last 18 months the Rolex Rippers have been linked to more than 30 distraction thefts in counties including Dorset, Hampshire, West Sussex, Surrey, Gloucestershire and Cheshire.

Last month, the thieving duo approached a woman in her 70s in Wareham, Dorset.

They asked for a donation to their ‘charity’ before taking £1,000 from her handbag that she had just withdrawn from the bank.

On the same day in the nearby Hampshire town of Bransgore, 77-year-old Michael Smith and his wife Enid, 76, were approached by the same two women in a Marks and Spencer car park. 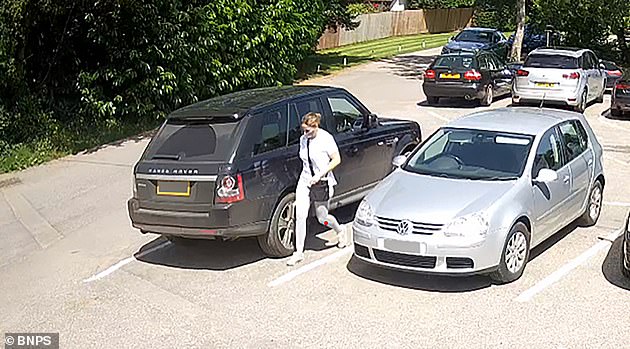 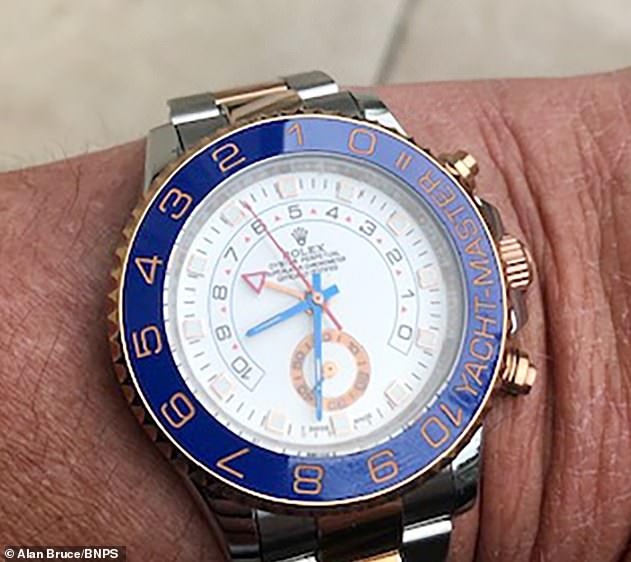 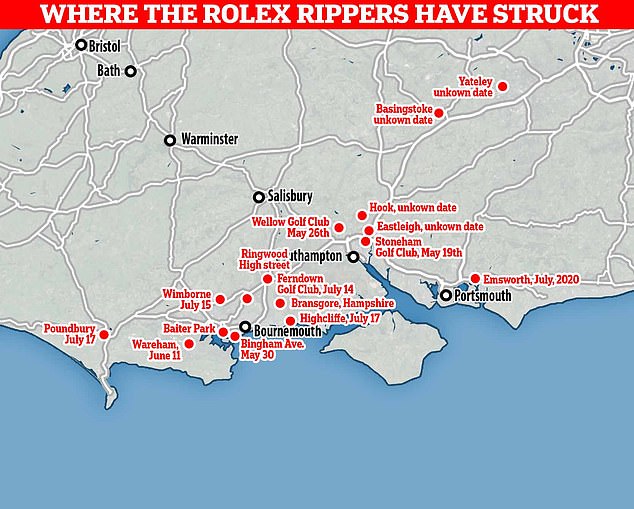 The elderly couple were forced to fight off the pair as one of the Rolex Rippers shoved Mr Smith against his car door.

The incidents were just a month after a near-identical report made in Wareham in August where a woman in her 50s was hugged by a female ‘charity worker’ who surreptitiously removed her necklace.

Why is it so difficult to track down stolen Rolexes?

Rolexes are problematic stolen goods, as each one has a unique serial number and every watch reported missing is put on the company’s lost and stolen register.

Stolen Rolexes can change hands several times between criminals over a period of years, as the truth about their original ownership becomes obscured, while their value depreciates.

Michael Parry, whose Rolex was stolen in the Cotswolds village of Bourton-on-the-Water, said: ‘If it goes to be repaired or serviced, they check the number – and if it has been reported stolen they won’t give it back to the customer.’

In the majority of reported cases, the victims of the Rolex Rippers have been elderly men, wearing designer watches on their exposed wrists.

Multiple police forces are hunting down the gang but so far only one woman has been caught.

In July this year, Stefania Tinica, a Romanian national, was jailed for a theft at a golf club in Cheshire last year.

Locals have connected the recent crimes, warning that the organised crime gang might have changed their tactics.

Sara Magern said: ‘This is incredibly similar to the watch thefts that happened last year. It was two women then, as well.

‘It seems the same people might have just found a new tactic.’

Most of the victims targeted by the Rippers were elderly men dressed in T-shirts and polo shirts.

Their bare arms in the warmer weather not only displayed their Rolexes to the prolific gang, it also made them easier to remove without them noticing.

One of those who lost his prized £14,000 Rolex was Alan Bruce, 63, a retired marine engineer from Bournemouth, Dorset.

He said in July: ‘It’s going to get worse as the weather gets warmer and people wear short sleeved clothes – they got me when I was wearing a t-shirt. It was a lovely hot day. You’re basically advertising it to them.

‘They’ve got away with it so far so there’s no reason why they won’t come back. They’ll be out here for their summer shopping spree when the warm weather hits.

‘People have got to be on their guard.

‘I’ve always had a real thing for expensive watches but I don’t think I’ll ever wear one again. I’ve got a much cheaper one now. 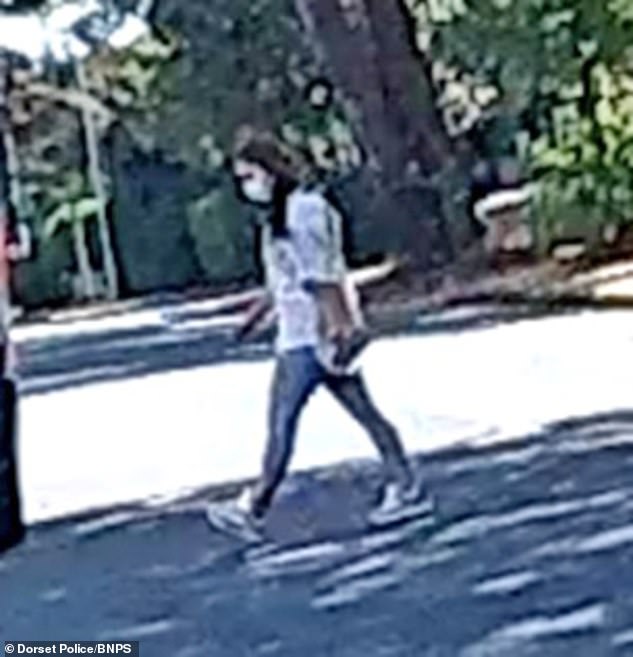 A CCTV image of a suspect after a robbery in lower Parkstone, Poole, in September last year 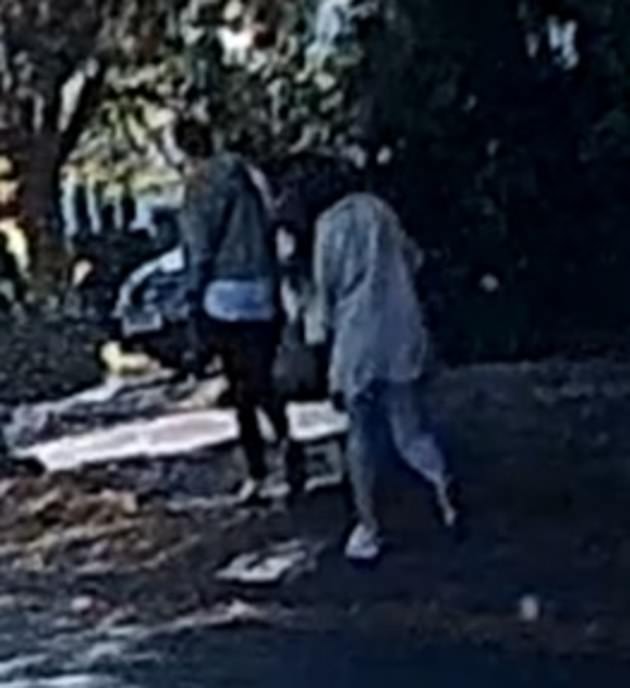 Two suspects spotted by police on CCTV in July. The women are believed to be aprt of the ‘Rolex Rippers’

‘I’d say the same to others – the more Rolex watches around, the more they’ll have to steal.

‘I’m very weary now, not just with watches but with all my items.’

‘It is alleged that two women were approaching members of the public purporting to be collecting money for charity.

‘A member of the public challenged the two women after allegedly witnessing them making attempts to pickpocket individuals on the High Street.

‘During the altercation a woman in her 40s was assaulted and suffered minor injuries to her arm.’

At the time PC Max Vallance, of Purbeck police said: ‘We are carrying out enquiries and have obtained images of two women we would like to identify.

‘I would ask anyone who recognises them, or has any information that might assist our investigation, to please come forward.

‘Also, I would like to urge people to remain vigilant if they are approached in similar circumstances, particularly if they are carrying large sums of cash.’

‘What the hell has happened to our country?’: Victims of the ‘Rolex Rippers’ speak out 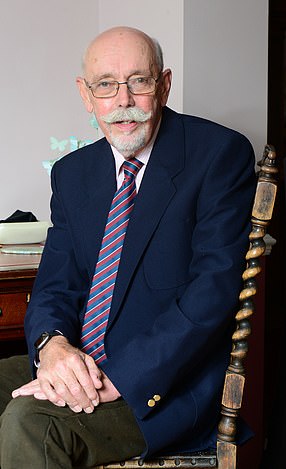 Derek Freestone was sitting in the passenger seat of his friend’s Mercedes, parked in the picturesque fishing town of Emsworth in Hampshire, when two women knocked on the window and asked him to sign a petition for a deaf school

Derek Freestone, a retired wine merchant from Birchington, Kent, was en route to the Goodwood Festival of Speed motor racing event with a friend when they stopped in Emsworth at 3.15pm on July 7 last year to pick up medication from a pharmacy in the town.

He was sitting in the passenger seat of his friend’s Mercedes, parked in the picturesque fishing town of Emsworth in Hampshire, when two women knocked on the window and asked him to sign a petition for a deaf school.

No sooner had he done so than one of them lunged, throwing her arms around the 77-year-old as she tried to kiss him.

Shocked, he barely gave a thought to the second lady, who had been shaking his left hand.

‘I jumped out and shot round the car but there was no sign of them. It happened so quickly,’ says Mr Freestone, still reeling from the robbery three months later.

‘It really hit me in the pit of my stomach. What the hell have we done to our country that this can happen in broad daylight?’. 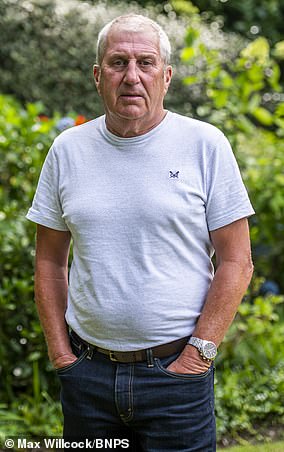 Within a day, the gang had moved on to their next target – Alan Bruce, 63, who lives at the edge of Ferndown Golf Club and was seven miles away in Wimborne, Dorset, when he was robbed at about 11am on July 15.

Having parked his Audi TT Sport, he was approached by two women carrying a clipboard in the town centre. He estimates both were in their late 20s or early 30s.

‘The taller one was in jeans and a dark top, the shorter one in a long, brightly coloured dress,’ says Mr Bruce, a divorced father of two who frequently travels for his job as a marine engineer.

‘I pick up accents and I would say they were either Albanian or Bulgarian. They said: ‘We’re doing a petition for a deaf centre’ and would I sign a document? I said no problem.’

Left-handed and wearing his £14,000 gold Yacht-Master Rolex on the same hand, he signed the petition. Then the younger woman said she loved his aftershave and asked where it was from. To his astonishment, she then asked him for a cuddle.

Alarmed, he instinctively put his right hand on his back pocket to protect his wallet and pushed the women with his left hand before walking away.

It was only as he did so that he realised his Rolex was missing, its double clasp having been prised off without him feeling a thing.