Home » The seven shots that took a life and changed another

The seven shots that took a life and changed another

The ex-cop with a reputation sits quietly at a picnic table at a little stop at a little country town on a perfect Autumn afternoon. Even though these days he tends to hunch and keep his head down, he is still physically imposing.

A few metres away is a wire rack where locals leave plants and herbs for anyone to grab. It is that sort of community. 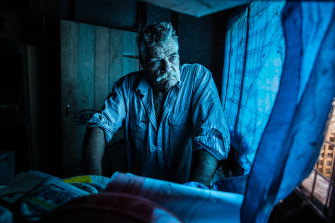 Cliff Lockwood in the home he shares with his cats. Credit:Jason South

Next door is the old-style general store he ran with his mother. It has been in the family since 1946. It is boarded up now.

They closed the main street bridge for repairs and the through traffic stopped. Then COVID hit.

“We were selling 300 pies a week, buying $1000 worth of stuff from the bakery. Then there was the virus.” His voice trails off. It often does.

As we talk his pet cats climb on the table and nestle into the big man with the salt and pepper hair and moustache. Often they are his only companions. “I prefer my own company,” he says.

Cliff Lockwood was just 19 when he left the peace of a tiny town to join the police force. “I know it sounds funny but I just wanted to do good. Nineteen was way too young. You don’t know anything.”

After graduating he was sent to Flemington, an area with a steady stream of angry, violent crooks. Lockwood soon developed a reputation as an old-school cop happy to take them on. “I was taught you should never be frightened of them. You join the police force to stand between the bad and members of the public.”

His then Sergeant, John Stubbs, remembers, “He was a first-class crook catcher, full of enthusiasm. He wasn’t much at paperwork. He would lock one up and want to go out and catch another.”

He stuck in that area and eventually became a detective. “I wish I hadn’t. I would have liked to have stayed in uniform. Driving the (divisional) van is an exciting job because you are stopping crime. We pulled a car over in St Kilda and found a girl who had been abducted. We probably saved her life. It is better than being in a suit and coming around the next day when it is too late.”

One of the most successful armed robbery gangs of the time was the “Flemington Crew”, led by Victor Peirce, Jedd Houghton, Graeme Jensen and Peter David McEvoy. 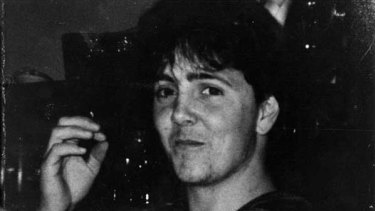 Before each job the gang had a thief steal two Holdens. One to be used for the armed robbery and the second as the clean getaway car, hidden a few kilometres away. His name was Gary Abdallah.

On October 11, 1988 Jensen was shot dead by armed robbery squad detectives during an attempted arrest. Just before dawn the next day two police, Stephen Tynan and Damian Eyre, were ambushed and murdered in Walsh Street, South Yarra.

The Flemington Crew were the suspects. (Peirce, McEvoy and two others were charged and acquitted of the murders.)

The police were lured to Walsh Street to check an abandoned car. It was a Holden, probably stolen by Abdallah. Lockwood was tasked to arrest Abdallah for a violent crime, but it had nothing to do with Walsh Street. 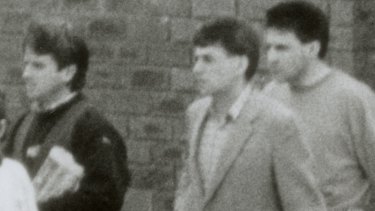 A police surveillance photo of, from left, Graeme Jensen, Victor Peirce and Jedd Houghton at the Boronia Shopping Centre in September, 1988.Credit:Victoria Police

In March 1989 a young man was deliberately struck by a car then reversed over in King Street. The driver was Gary Abdallah.

“It was pretty serious. He wasn’t just clipped. There were tyre marks on his body. He was lucky to survive.”

Lockwood says he knew Abdallah but not well. “I may have charged him, I can’t remember. I knew the name and had previous dealings with him. He was an active car thief.

“I have been asked, did I like or dislike him. I never judged any of them, it just didn’t matter.”

On Sunday April 9, 1989 Lockwood and his partner, Senior Detective Dermot Avon, arrested Abdallah and took him to his Drummond Street two-level flat to search for evidence and an accomplice. According to both police, Abdallah grabbed what they believed was a loaded handgun and threatened them.

Lockwood fired his full six shots at Abdallah, then grabbed Avon’s gun, who had drawn his weapon but not fired, to discharge a seventh – and fatal round. The gun found next to the dying suspect was a fake.

Lockwood later told Homicide, “I saw that he was holding what I believed to be a .357 Magnum revolver … I think he was holding it in his right hand and was using his left hand to support it . . . He was bringing the revolver up to the firing position when I first saw it. . .

“I screamed at him, ‘Drop the gun, drop the f—-in’ gun,′ a couple of times. He screamed, ‘I’m not doin’ nothin’,’ or similar. I just kept screaming at him to drop the f—-ing gun. I started shooting at him and he kept raising the gun at me. I must have shot six because I took Dermot’s gun and shot one from his, I think. The last shot he dropped to the ground. We rolled him over and pushed the gun away. Avon was giving him mouth-to-mouth.”

A neighbour said, “All the time I heard the bangs the male voice was continually yelling out . . . Put the f—-ing thing down.” 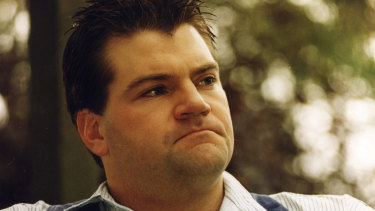 So why would a man pull an imitation firearm when all police post-Walsh Street were a touch jumpy?

Perhaps Abdallah pulled the gun because he thought he, too, was about to be shot. The truth is only he knows.

Lockwood and Avon (who did not fire a shot) were charged with murder. The prosecutors did not allege it was premeditated and the replica was planted. They said while the first six shots could be construed as self-defence, the threat was gone by the time Lockwood grabbed his partner’s gun and fired the final bullet.

“I used to be a red-necked hater. Now I think most people in jail have made bad decisions. There are very few really bad people.”

Both men were acquitted. Lockwood believes there was never enough evidence and they were charged to satisfy media outrage. “I don’t feel any guilt. He brought this upon himself with a stupid action.”

Coroner Hal Hallenstein found, “Abdallah has contributed to a sequence of events leading to him being fatally shot by picking up and pointing at Lockwood an imitation revolver reasonably believed to be real.”

The prospect of being sentenced to a large slice of his life in prison changed Lockwood. “It was time to get out and live my life. I wanted to travel and have as much fun as I could.”

He worked as a locksmith in Melbourne before he and his then wife headed to Darwin, hoping to join the Northern Territory police. She was accepted while he was rejected.

“I rang them before I left to see if there was a problem with my background and they said it wasn’t. In hindsight it was a waste of time. They had no intention of allowing me in.”

Lockwood worked in Darwin, Bali and East Timor in travel, car rental and as a taxi driver. But his reputation followed him. Often, he says, local police would tell others he was the ex-cop acquitted of murder.

“The common thing I get is people saying he bloody well deserved it. That’s not what I want to hear.

“Overseas is a good option until you run into an Australian. Sometimes you have to look after yourself when someone says, ‘Right, I’m going to bring some justice here’.”

Life spiralled out of control for Lockwood. He began taking drugs and in 2009 was arrested for trafficking pseudoephedrine.

He doesn’t claim innocence but says he was set up. He says he was taking drugs with a woman in a hotel who persuaded him to deliver the tablets to “Andy”, an undercover police officer.

“I went on a bender with her then she gave me a bag of Sudafed tablets to deliver. It was a stupid thing to do. A momentary lapse in the fog.”

He pleaded guilty and was sentenced to 17 months – serving eight months. The once lock ’em up cop found a new perspective by becoming an inmate with local offenders and people smugglers. Prison, he says, was good for him.

“If you take the embarrassment out of it, if I had my time over again, I wouldn’t change it. It was a very enlightening time.” He says many inmates need treatment, not punishment. “There has to be a better way.”

“I used to be a red-necked hater. Now I think most people in jail have made bad decisions. There are very few really bad people.”

Back in Victoria, Lockwood has been diagnosed with PTSD. There is broken sleep, anxiety, depression and lethargy. “You can’t put it aside and stop thinking about it. There is nothing you can do about it.

“Some police on the ground think I have gone to the dark side. They treat me with suspicion and that bloody hurts. The dark side – imagine that.

“I am still loyal to the cause. I always have been.”

a, LI, Seven, Shots, That, the, took
World News