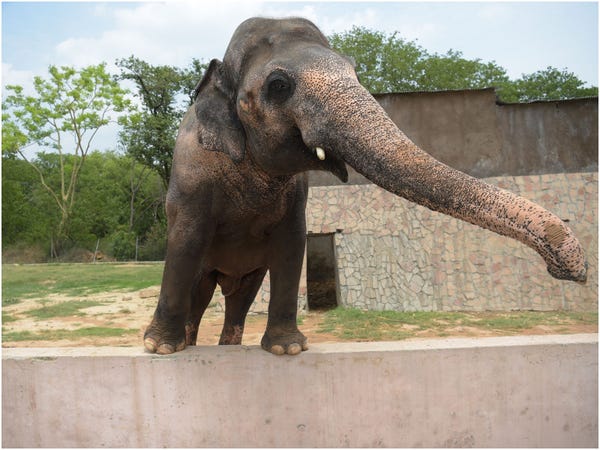 "The loneliest elephant in the world" has got the green light to escape the zoo he has been kept in for 35 years and be released into a wildlife sanctuary to find a better life and companionship.

Kavaan the elephant was given a medical examination at the zoo in Islamabad, Pakistan, and has received approval to travel according to Four Paws, the animal welfare organization.

Kavaan, who had survived in a small enclosure in the Marghazar Zoo by himself since 2012 when his partner died, will likely be relocated to Cambodia to find the companionship the elephant craves.

Four Paws carried out the medical examination and found that Kavaan was strong enough to travel, although there were medical concerns.

Dr. Amir Khalil, a Four Paws veterinarian and mission leader, conducted the examination and said that Kaavan is overweight due to malnutrition and little physical exercise. Khalil also found that Kaavan's nails were "cracked and malformed" due to the poor flooring in his enclosure. Khalil said that Kaavan would need to undergo long-term foot treatment.

Dr. Frank Göritz, the head veterinarian at Berlin's Leibniz Institute for Zoo and Wildlife Research, added that Kaavan has behavioral issues due to being isolated for so long. Göritz said that Kaavan swings his head from side to side for hours, resulting from boredom.

"Overall, the results from his blood tests are good," Göritz said. "And his general health condition allows him to be relocated."

The medical examination comes after the Islamabad High Court closed the Marghazar Zoo in May because of its poor conditions.

The Islamabad Wildlife Management Board took over responsibility and invited Four Paws over to conduct the examination. The decision to close the zoo came too late for two lions, Four Paws report, who died during an attempt to transfer them in July. The animal handlers set a fire in their enclosure, trying to force them into cages for transport.

Kaavan arrived at the zoo from Sri Lanka when he was only one-year-old in 1985. His relocation is a big win for the animal rights group and singer Cher, who has been campaigning for his release for four years since 2016.