Theresa May gets flowers from well-wisher on first outing since

Theresa May smiled with a bunch of flowers in hand on her first public outing since stepping down as Conservative leader.

Mrs May beamed as she clasped a bouquet given to her by a well-wisher on her way to church near Maidenhead, Berkshire this morning.

It is the first time she has been seen in public since she gave up her position as Tory Party leader on Friday.

She will remain interim Prime Minister until a new Tory leader is elected this summer. 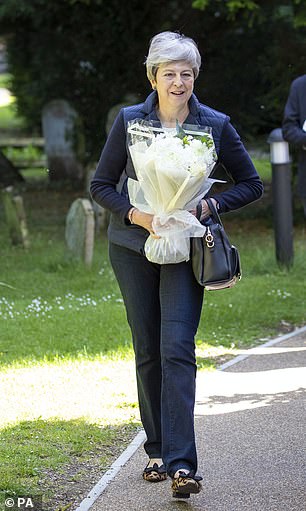 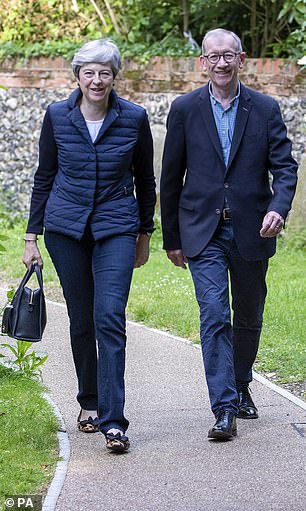 beamed as she clasped a bouquet given to her by a well-wisher on her way to church with her husband Philip near Maidenhead, Berkshire this morning 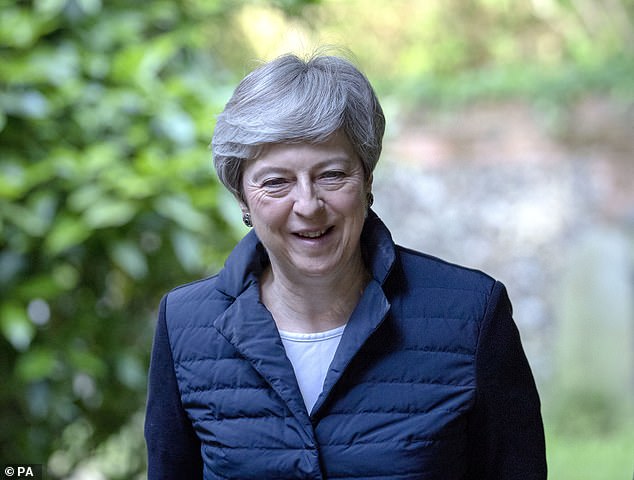 The PM’s last official engagement as party leader came on D-Day when she travelled to Normandy to mark the 75th anniversary of the Allied landings.

Speaking in Ver-sur-Mer on Thursday she honoured veterans who fought to liberate France from the Nazis in 1944 and laid a wreath on a new British Normandy memorial.

She looked solemn but relaxed as she spoke to French President Emmanuel Macron who declared that nothing, including Brexit, can break the bond between the two country formed during the Second World War. 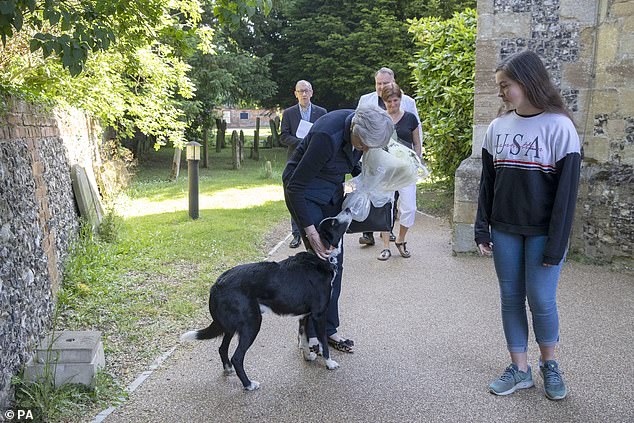 She looked upbeat as she attended her local Sunday morning service with husband Philip, stroking a dog of one of her constituents outside

Today she looked upbeat as she attended her local Sunday morning service with husband Philip.

Those vying to take her job must have declared themselves candidates by tomorrow, with the vote expected to take place in late June or early July.

Former Mayor and ardent Leave campaigner Boris Johnson is still favourite to replace her, with 10 others fighting his bid. 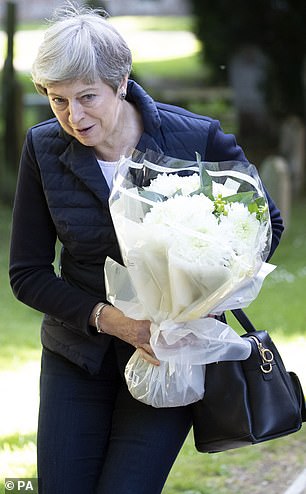 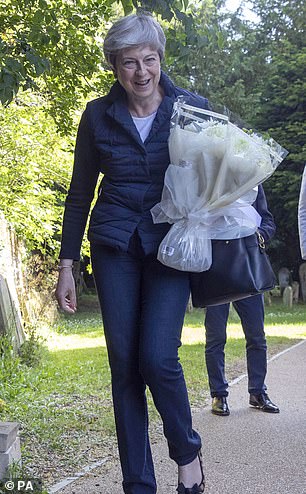 Mrs May was last seen on D-Day on Thursday, when she was still leader of the Conservative Party. Today she was given a bunch of flowers as she attended church 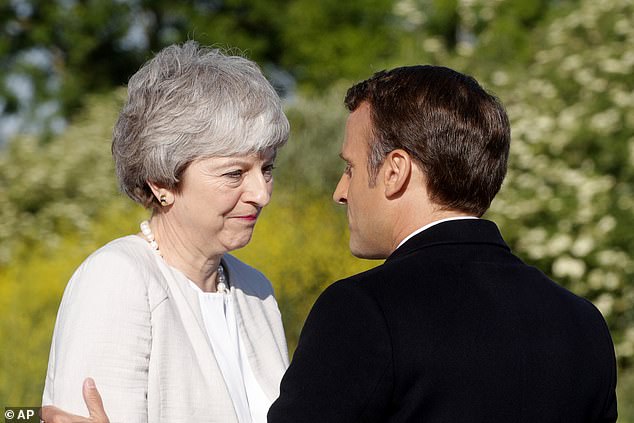 French President Emmanuel Macron greets the Prime Minister during the Franco-British ceremony for the 75th anniversary of D-Day at Ver-Sur-Mer, Normandy on  her last official engagement as Conservative leader on Thursday

What do the candidates for the Tory leadership think about Brexit?

The Conservative leadership race is ramping up ahead of nominations opening on Monday as the contenders continue to declare their credentials for the top job.

Here are the runners and riders:

The former foreign secretary, who played a key role in the Vote Leave campaign at the 2016 referendum, is widely seen as the front-runner.

On Brexit, he has committed to keeping the October 31 deadline even if that means leaving without a deal and said he would step up no-deal preparations.

He also said he would refuse to pay the promised £39 billion to the European Union unless better Brexit terms are on offer.

Key quote: ‘I truly believe only I can steer the country between the Scylla and Charybdis of Corbyn and Farage and on to calmer water.’

What he’s said about drugs: Confessed to trying cocaine and smoking cannabis as a teenager at Oxford in a magazine interview in 2007.

The Foreign Secretary has ruled nothing out on Brexit, but insists that his experience as a negotiator in both business and politics means he could go to Brussels and secure a better deal.

He has said he would keep a no-deal Brexit on the table, but warned it could be ‘political suicide’ for the Conservatives as Parliament would force a general election.

He has called for a big increase in defence spending after Britain leaves the EU to counter rising global threats and has suggested slashing corporation tax to Irish levels of 12.5% to attract investment.

Key quote: ‘We will absolutely be obliterated in an election if we haven’t delivered Brexit.’

What he’s said about drugs: Told The Times he had a ‘cannabis lassi’, a yoghurt-based drink, when he was backpacking through India in his youth.

The former Brexit secretary has set out an uncompromising approach in a bid to appeal to hardline Eurosceptics.

He wants Brussels to ditch the Irish backstop as part of a new agreement, but if the EU will not move on the issue, he will walk away without a deal on October 31 – and has not ruled out suspending Parliament to ensure that MPs cannot block the UK’s exit.

He also wants to toughen up community sentences and has promised a shake-up of maternity care.

Key quote: ‘We need to up our game, which means being less naive, and being absolutely resolute about our intention and our resolve to leave on October 31. It seems to me that I’m the only candidate in this race that is clear about that.’

What he’s said about drugs: Has admitted taking cannabis as a student.

The Environment Secretary, who scuppered Mr Johnson’s last leadership bid in 2016, is again positioning himself in opposition to the front-runner.

Unlike Mr Johnson, he has not ruled out seeking a further delay to Brexit – possibly for months beyond October 31 – if a deal is in reach, and warned pursuing a no-deal scenario could lead to a general election in which Jeremy Corbyn could enter Number 10.

He has set out a ‘pro-business economic plan’ to take on Mr Corbyn’s ‘Marxist message’ and said he would replace VAT after Brexit with a ‘lower, simpler’ sales tax.

Key quote: ‘If I am prime minister of this country I want to ensure it’s the best place in the world to live, learn, raise a family, achieve your potential, and start and run a business.’

The International Development Secretary has travelled around the country filming himself chatting to voters in a bid to raise his profile in the race.

A Remainer who now accepts the referendum vote, he has ruled out a no-deal Brexit and would establish a citizens’ assembly to thrash out a new Brexit compromise.

He has also pledged to protect the Conservatives’ ‘reputation for economic competence’, hitting out at the ‘unfunded spending commitments’ made by rivals.

Key quote: ‘Candidates that are advocating a no-deal Brexit as well as tax cuts will – in one afternoon in October – lose us a reputation that we have spent 300 years building up.’

What he’s said about drugs: Has apologised for smoking opium at a wedding in Iran.

The Home Secretary hopes to renegotiate the Withdrawal Agreement to remove the Irish backstop but does not want a delay beyond October 31.

He has set out a plan to tackle the Irish border issue by spending hundreds of millions on a technological solution, saying the UK has a moral duty to pay for measures at the border in an effort to secure a breakthrough.

Mr Javid has put forward a number of policy proposals, including cutting the top rate of income tax and establishing a £100 billion fund to invest in the UK’s infrastructure.

What he’s said about drugs: Has denied ever taking drugs.

The Health Secretary insists a no-deal Brexit is not a credible option and Parliament would never allow it.

He has set out a Brexit delivery plan to leave by October 31, including establishing an Irish border council, made up of UK and Irish officials, to prevent the return of a hard border and time-limiting the backstop.

He has also pledged to scrap business rates for small retailers and increase a tax on internet companies to ‘level the playing field’ for high streets, and has set out his vision for a foreign policy that boosts trade and ‘resists protectionism’, while also promising to ‘uphold our values’.

Key quote: ‘If in order to deliver Brexit we were to change who we are as a country we would have failed.’

What he’s said about drugs: Is understood to have tried cannabis as a student but has not used drugs since university.

The former leader of the Commons, who ran against Mrs May for the party leadership in 2016, was another prominent member of the Vote Leave campaign.

She has set out a plan to scrap the Withdrawal Agreement and instead ‘massively ramp up’ preparations for a ‘managed’ exit without a full deal.

Mrs Leadsom has also promised to tackle climate change at home and abroad and establish a cross-party commission to find a solution to funding social care, and has warned that bold tax-cutting pledges could easily be blocked by Parliament.

Key quote: ‘I truly believe in the bright future that awaits us once we leave the EU. And I think I have the best plan that I’ve seen for delivering a managed exit.’

What she’s said about drugs: Told the Independent that she ‘smoked weed at university and have never smoked it again since’.

As the only contender open to a second referendum, the former universities minister is widely seen as a rank outsider.

His five-point plan would give MPs a ‘final chance’ to get a Brexit deal through Parliament while also preparing for a referendum if that failed.

The public would be offered a binding choice between a no-deal Brexit, a revised deal or remaining in the EU.

Key quote: ‘The world won’t wait for Westminster, no matter how loudly we shout, and no matter how damaging a prolonged Brexit process is for Britain.’

What he’s said about drugs: Has denied taking any drugs.

The committed Brexiteer has said she would fill her Cabinet with fellow believers.

She has called for the Tories to ’embrace’ a no-deal Brexit in order to make sure the UK leaves on October 31.

Elsewhere, she has caused controversy with comments championing the right of parents to take their children out of lessons on same-sex relationships.

Key quote: ‘I think you need to have people who believe in Brexit to deliver this by October 31.’

What she’s said about drugs: A spokesman told The Telegraph she ‘has never taken cocaine and never would’.

A former Conservative chief whip and Remain supporter who now accepts the referendum result, Mr Harper acknowledges he is an underdog in the leadership race.

He has called for a ‘short, focused’ extension to allow for the deal to be renegotiated but said he would be prepared to leave with no deal if that is not possible.

He has claimed sticking to an undeliverable October 31 exit date could risk making Nigel Farage even stronger.

Key quote: ‘I know what people want to hear but I am not going to tell people what they want to hear if I don’t think it is credible.’

What he’s said about drugs: Has denied taking any drugs.

flowers, from, gets, May, Theresa
World News